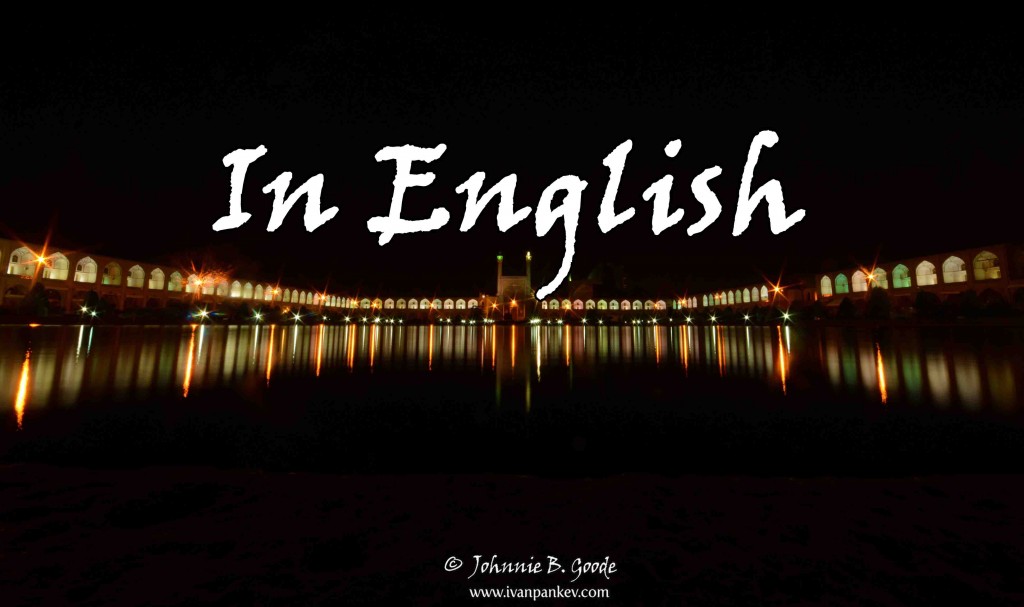 This is the story of my 5-month eastern journey through Turkey, Georgia, Abkhazia, Azerbaijan, Armenia, Nagorno Karabakh and Iran. In this part you will walk around “Half of the world” (Isfahan).

After almost 20 days of roaming around the vast Iranian territory it was time to visit the imperial cities of Persia, glorified as some of the most beautiful in the Islamic world. 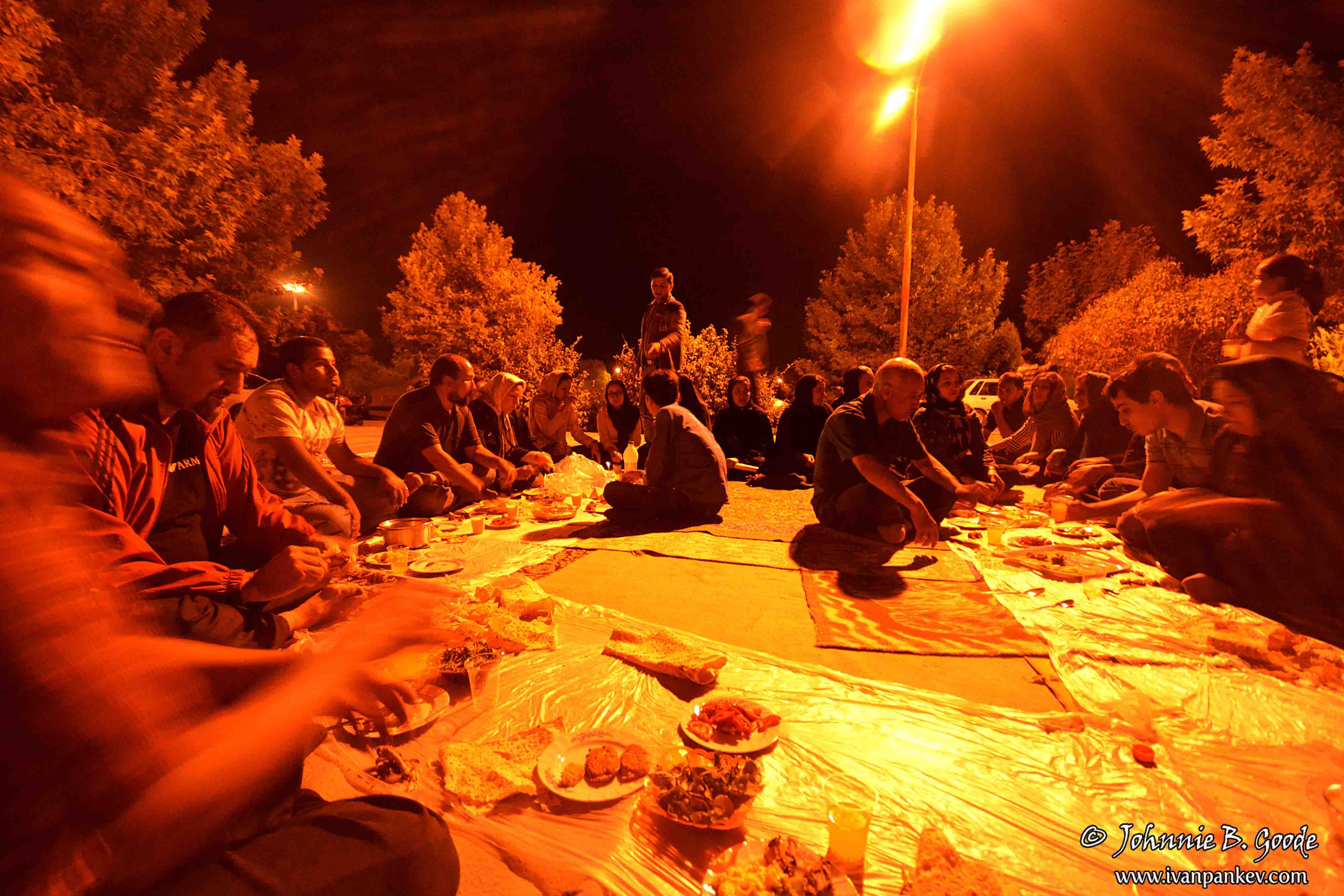 Rasoul, his wife and two sons picked me up at sunset. He offered me to accompany them to his wife’s brother – Dr. Kargar. In the evening they organized a gathering of their relatives – more than 40 people – and I was a kind of honored guest. People wanted to know where I had been, what I had seen, what were the habits in my country, what were my impressions of theirs, … My few words in Farsi won them completely. I stayed with them for two days, and they insisted to stay more. 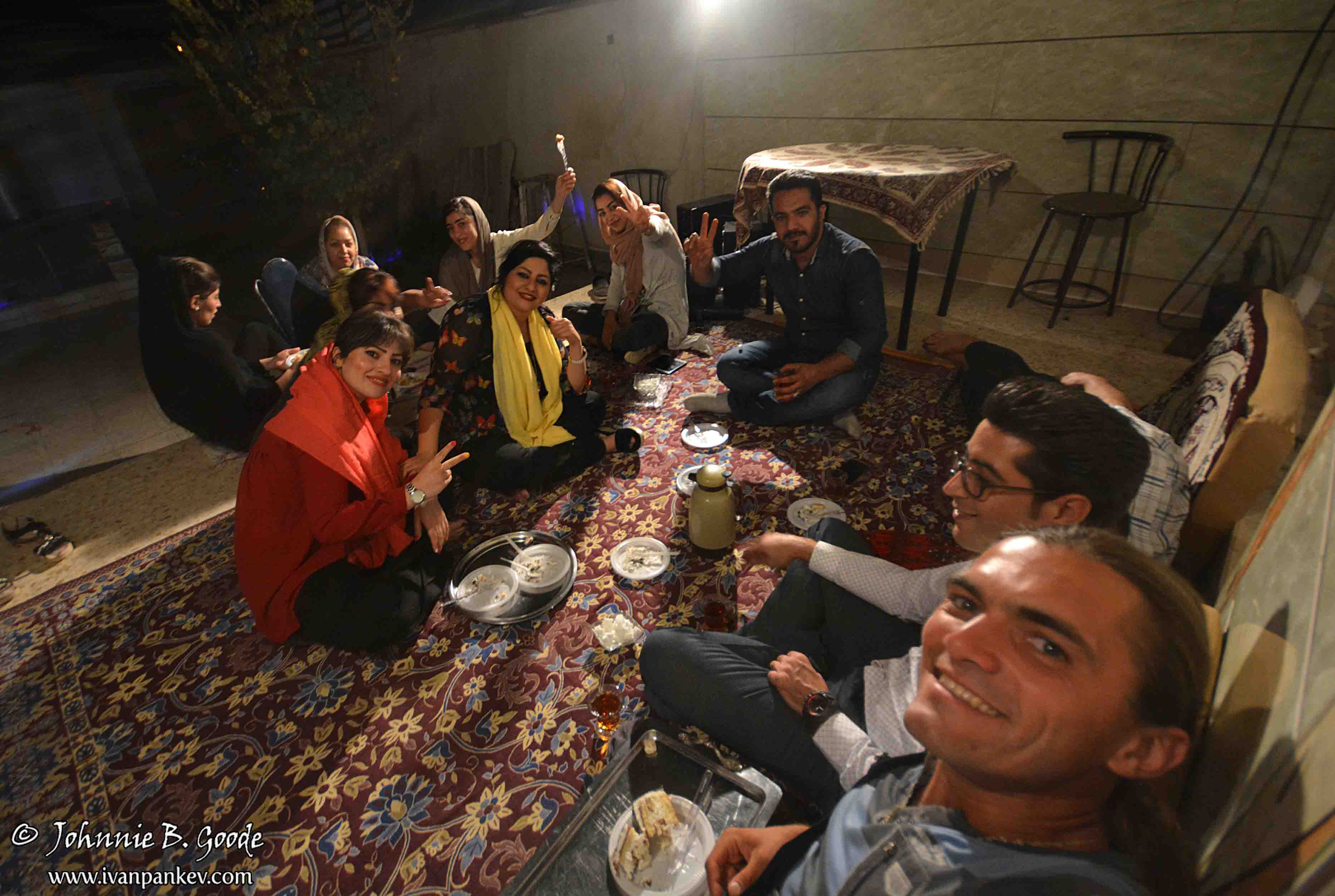 Men in Iran complained mostly of the ban on sale and consumption of alcohol and women – of the compulsory wearing of scarfs. The dances were also prohibited, however, this did not stop the locals from having fun. I was lucky to attend the celebration of the birthday of Fatima’s aunt, the wife of the doctor. The yard was literally turned into a disco – loud music, strobe lights, a spinning disco-spotlight with color lights, even an artificial smoke machine. The only difference with Bulgarian ones was that here there was no physical contact between the sexes. 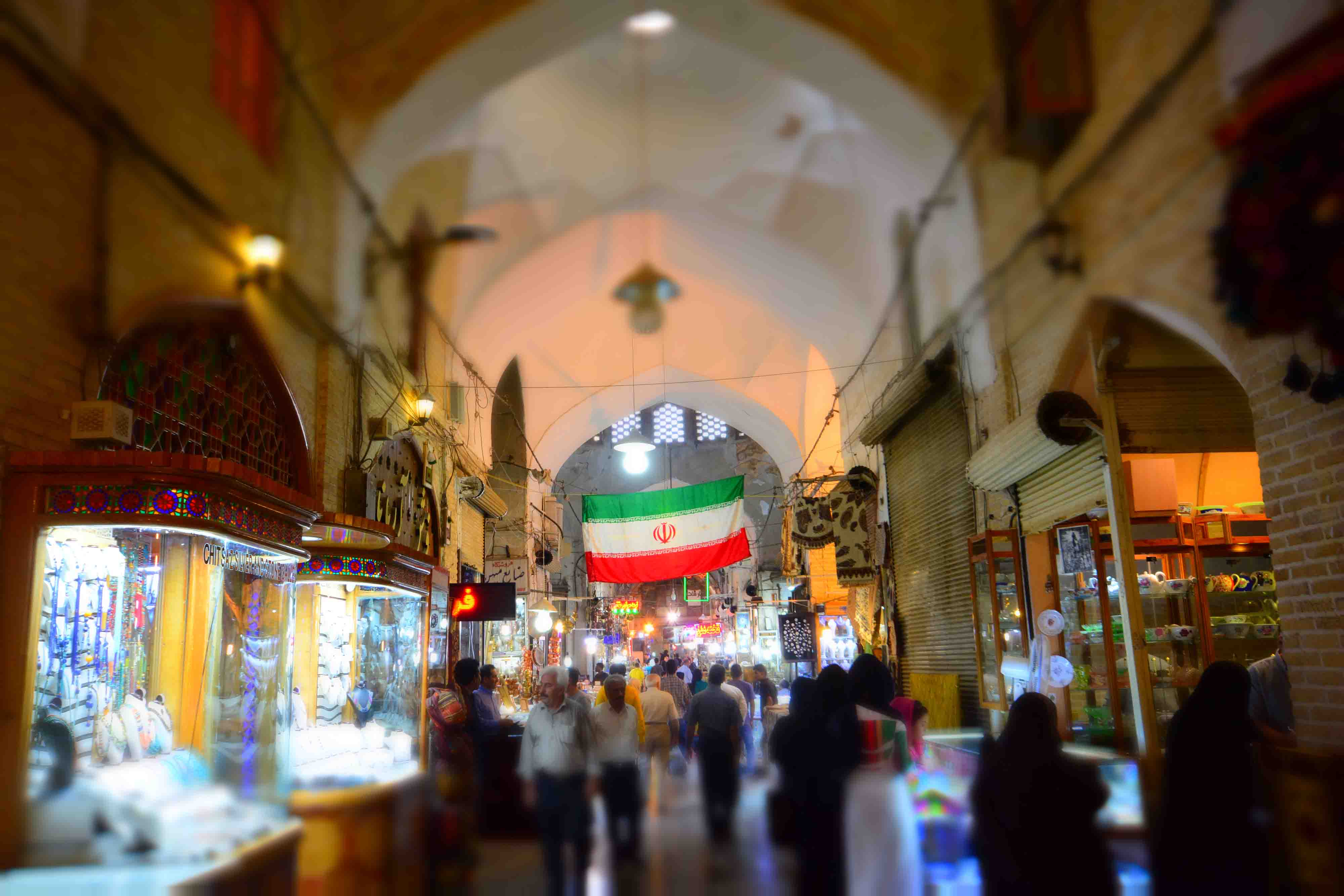 Isfahan was the biggest tourist draw in Iran. The pearl of Ancient Persia fascinated travelers for centuries to such an extent that in the XVI century the French poet Renier had described the city as “Half of the World”. Despite the vast expansion (third largest in the country with 2 million inhabitants) the old city still retained the charms of eras long-gone.

The owner of a carpet shop started a conversation with me around midnight on my first night in Isfahan, while I was sitting on a bench, wondering where to camp. He invited me to stay at his home. Yousuf and his wife Elham almost adopted me. They provided me with shelter, food and showed me around the city, paying for my entry tickets. Three days later I convinced them to let me leave with the promise to return someday.

Yousuf and I, we first visited the Armenian Vank Cathedral. Its cupola looked like the dome of a mosque and its interior was beautifully painted from top to bottom. The adjacent museum boasted the smallest book in the world – 7 grams – containing the Lord’s Prayer in 7 languages. Inside the temple I met a group of Bulgarians on an organized tour around the country. 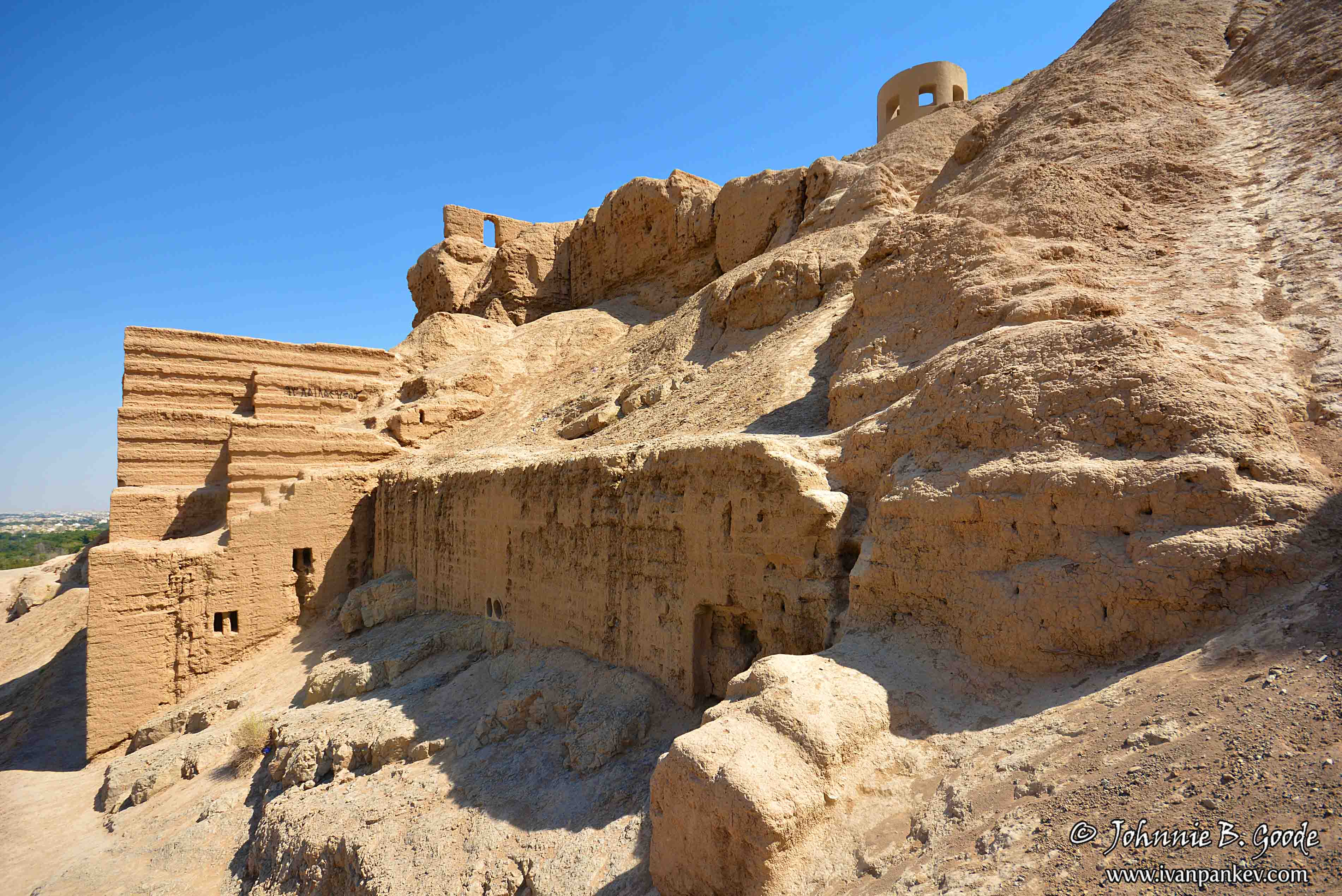 The Zoroastrian fire temple Ateshkadeh in Isfahan was ridiculously restored or should I say rebuilt, but it offered nice views. Interesting to me were also the ruined adobe buildings and walls, unwracked by restoration. 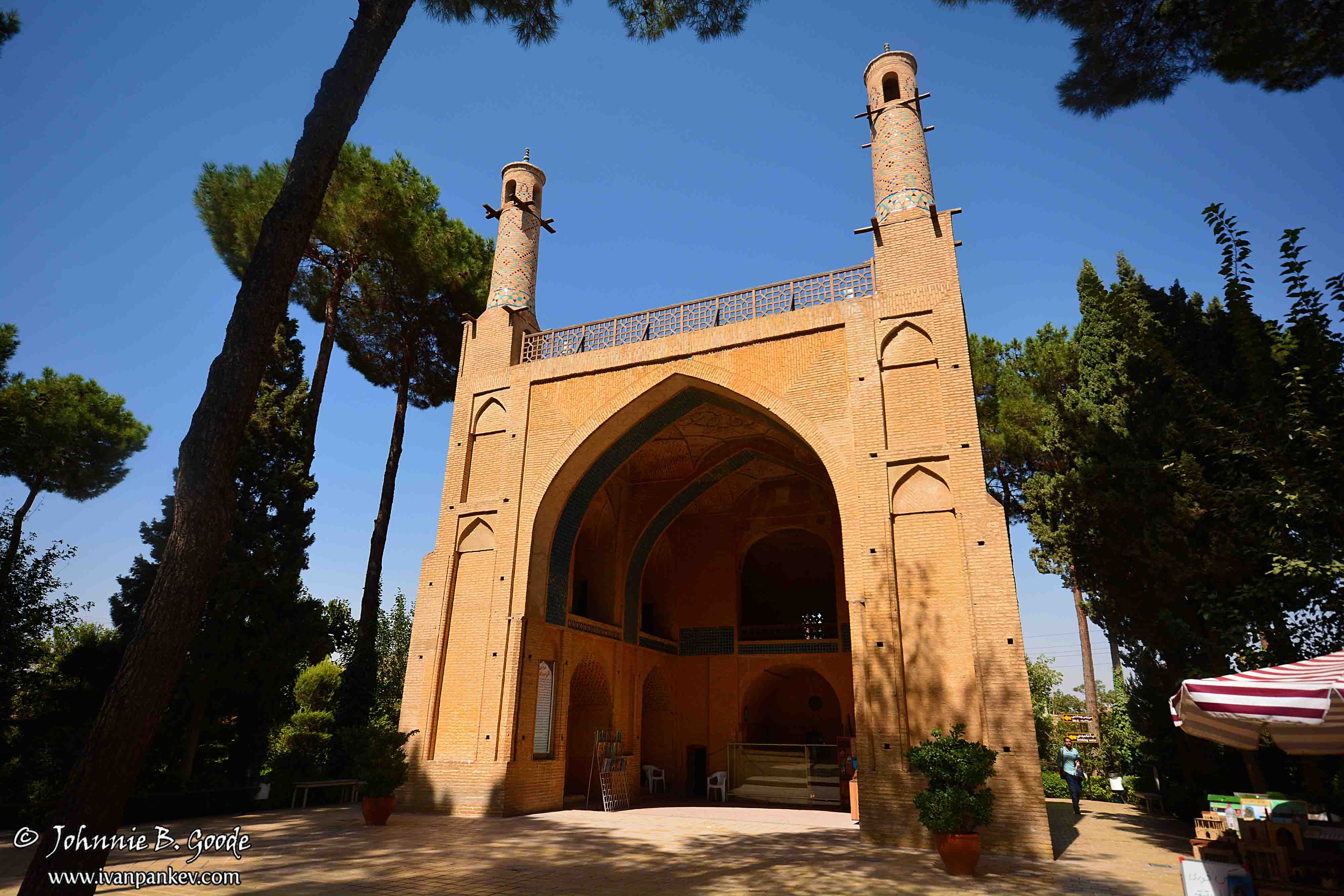 I understood why Manar Jomban (Shaking Minarets) bore that name. A man climbed inside one of the minarets of the tomb and shook it. The other started to swing in sync with the first. 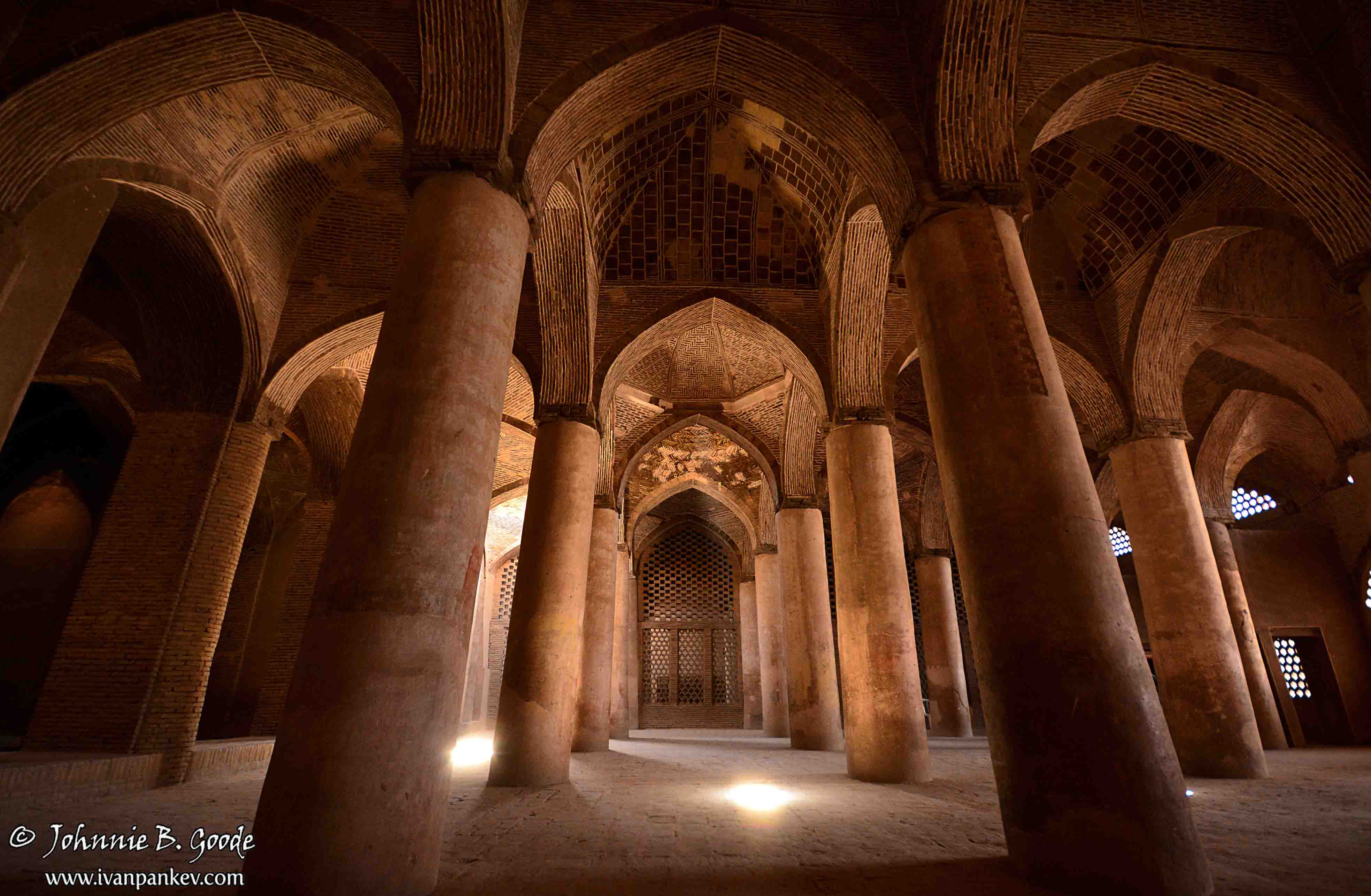 Masjed-e Jameh was the biggest mosque not only in Isfahan, but in all of Iran and part of the UNESCO World Heritage List for it was considered a stunning illustration of the evolution of Islamic religious architecture over 12 centuries, starting in 841 AD. The mosque was huge with many separate premises with ceilings supported by arches and columns – one of my favorite architectural elements. 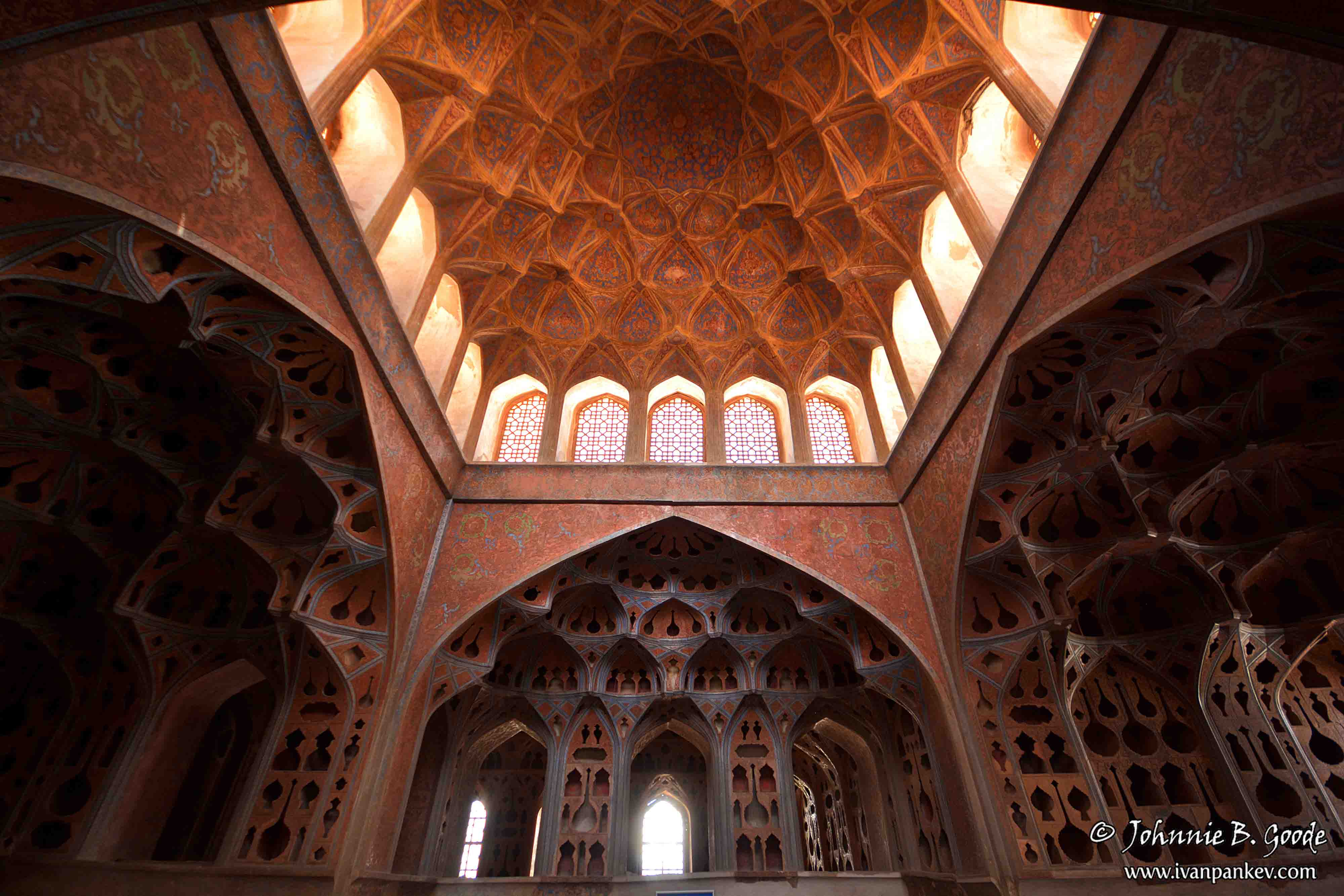 Ali Qapu Palace was enormous, but only the tallest building was open to visitors and 5 floors of it were just a staircase. The vast terrace had some interesting murals of naughty girls and offered nice panoramic views of Naqsh-e Jahan square. The room on the top floor had a strange ceiling with exquisite niches. Their purpose was to prevent echo during music performances, so it was called “The Music Room”.

Masjed-e Sheikh Lotfollah Mosque was small, with no minarets and consisted of only one room, but it was enchantingly beautiful – it was covered inside with blue tiles in floral motifs and inscribed with suras from the Koran and the dome resembled the coloration of the tail of a peacock. 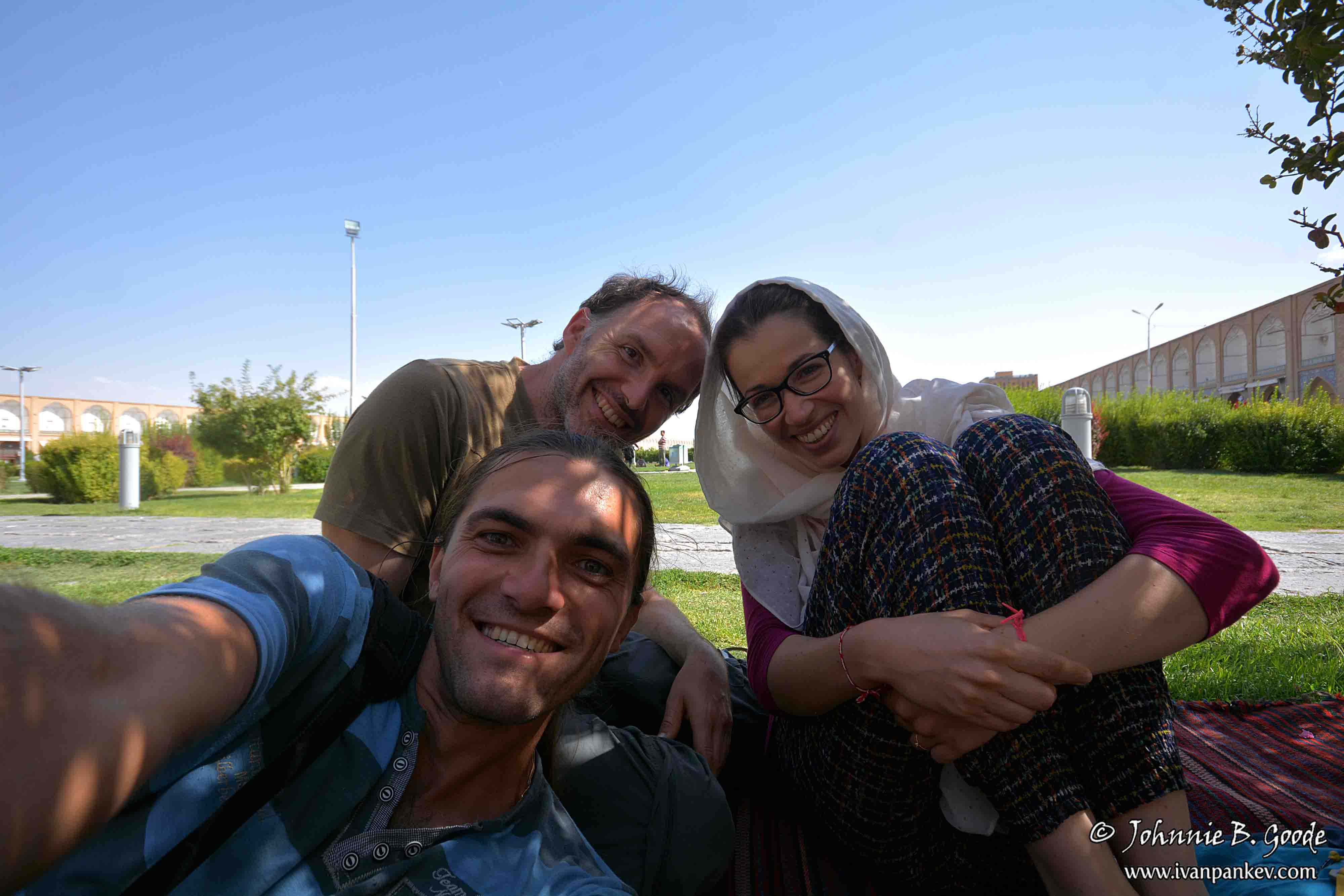 Naqsh-e Jahan Square was the second largest on earth after Tiananmen in Beijing and a UNESCO World Heritage Site. It was home to arguably the most majestic collection of buildings in the Islamic world. Here I met a Frenchman by the name Chris and his Bulgarian wife Maria. For almost five months of travelling I had met no compatriots (except my friends), but now it happened to me twice in a day. Maybe Isfahan was really a half of the world. 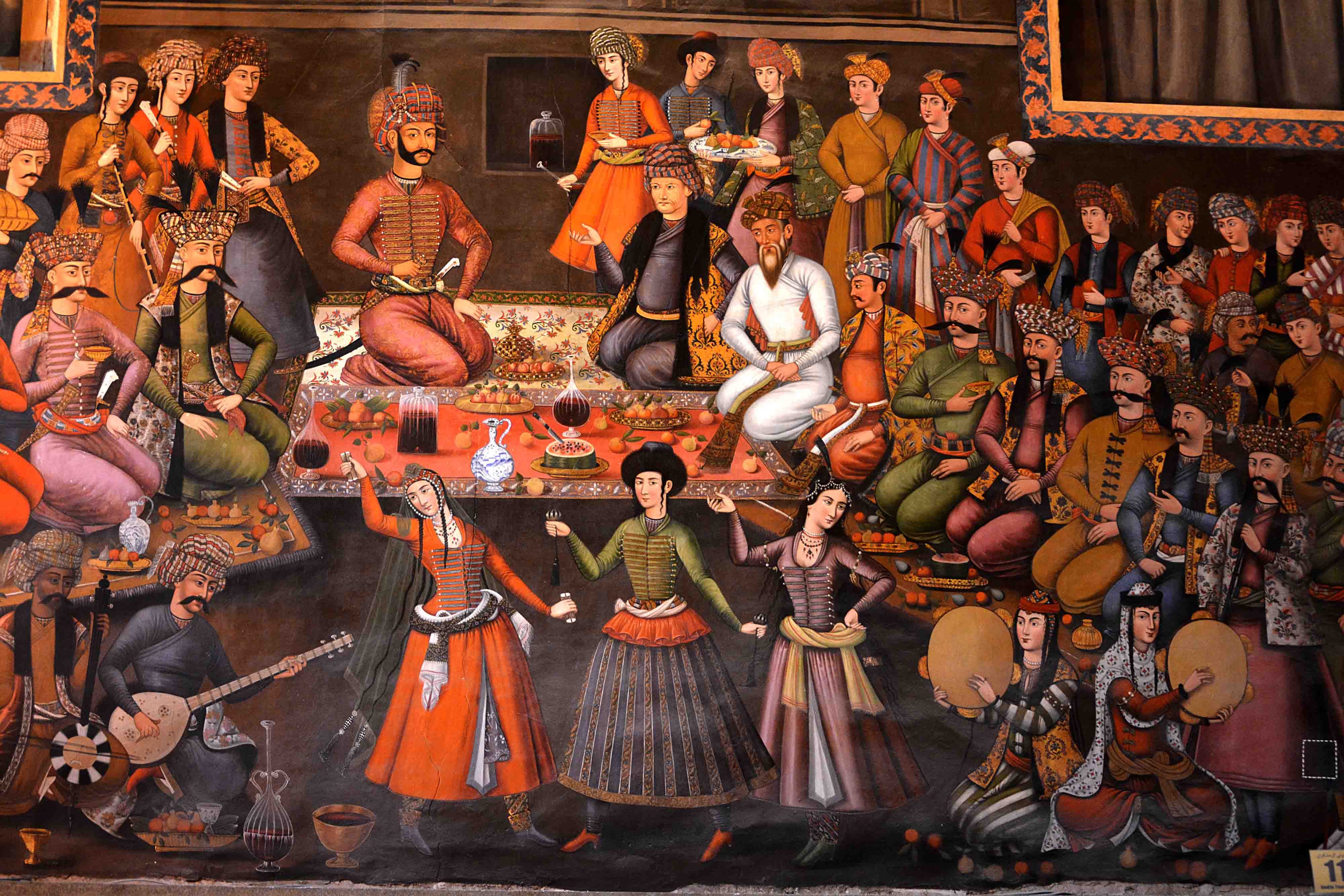 Chehel Sotun Palace was situated in a nice park with tall trees. The roof of the veranda was supported by 20 wooden pillars, which were reflected in the still waters of the pool in front, hence the name “40 pillars”. The real attraction here was the only open to visitors audience chamber. Its walls and dome were painted with scenes from the Koran and naked girls. A curious combination. 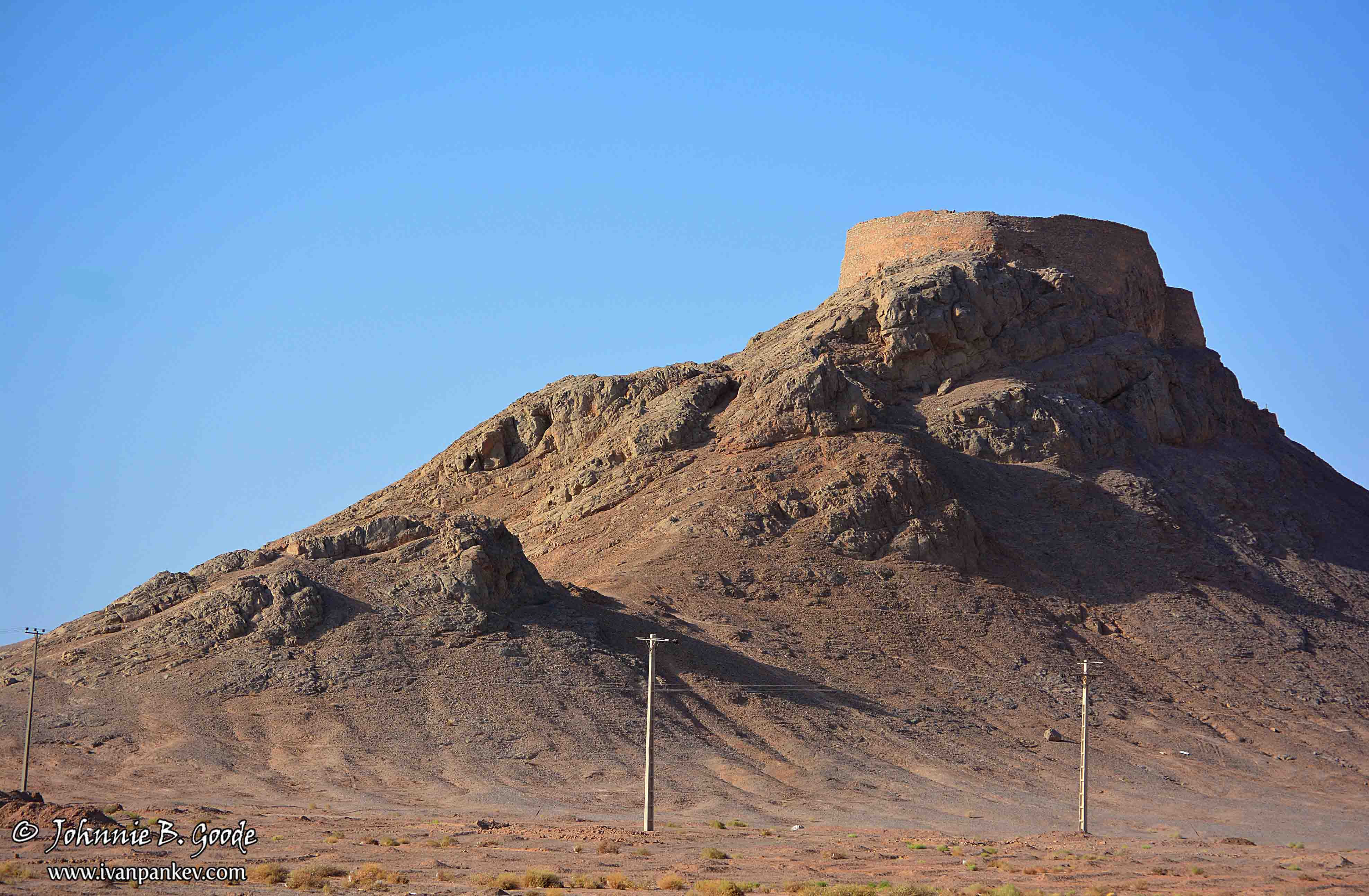 What did travelling without a plan mean – trying to hitch a ride to Yazd on the main road 200 km. away from the city, but to reach it two weeks later, after 3500 km. of hitchhiking. The city welcomed me with the Towers of Silence – an ancient Zoroastrian site consisting of several buildings in the foot of two hills which tops were encircled by six-foot walls. Here the local fire worshippers had performed sky burials – the dead bodies had been left to the vultures. 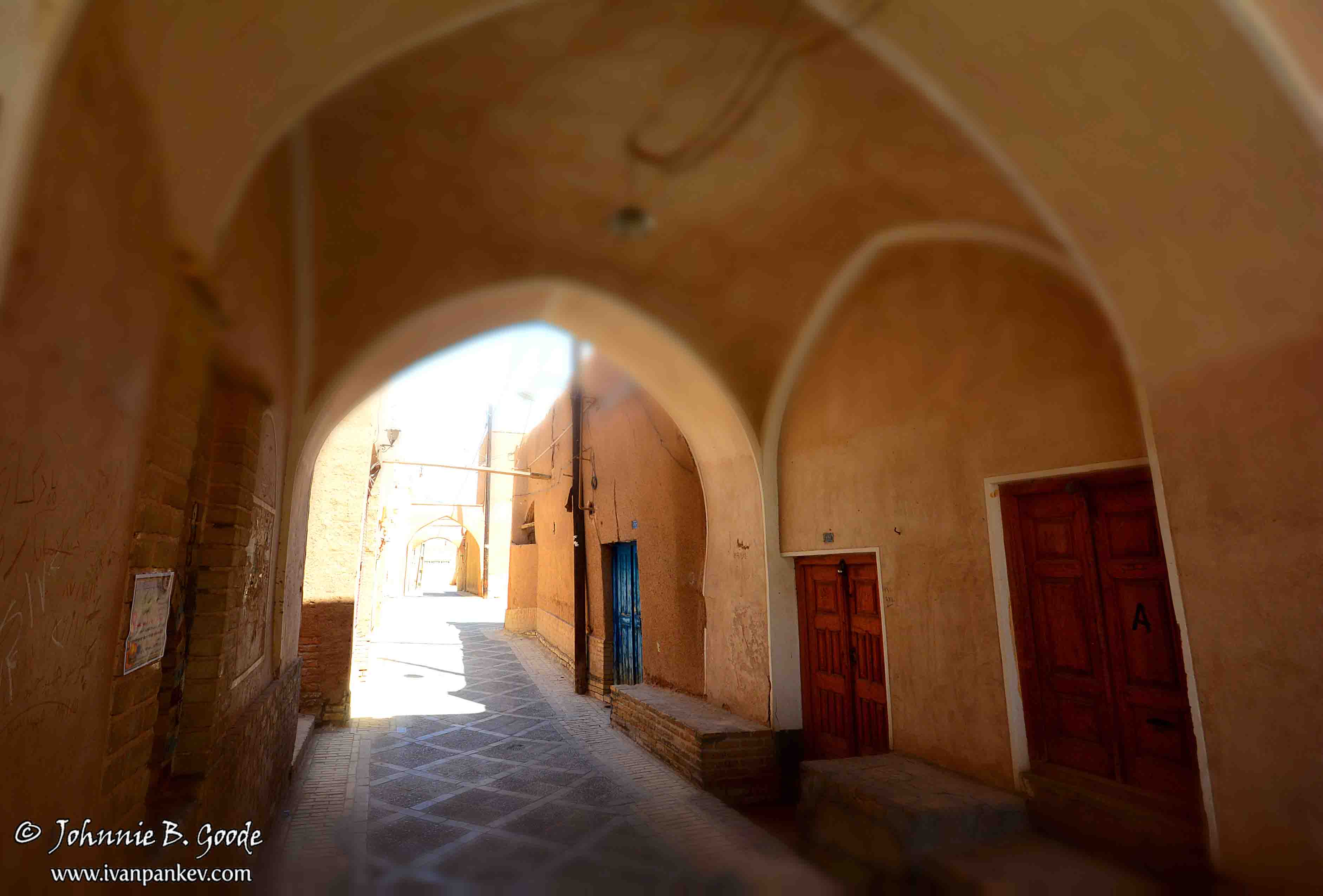 The old town of Yazd resembled Kashan, but was even more attractive. Buildings and walls were plastered with orange-pink clay and the narrow, winding streets often turned into tunnels under the houses. The numerous elegant windtowers, rising above the adobe buildings, were also eye-catching.

Bagh-e Dolat Abad was yet another Persian garden part of the UNESCO World Heritage List. It consisted of a vast space enclosed by an adobe wall. In the middle there was a pool with fountains surrounded by two rows of pine trees. At one end there was a pavilion with beautiful stained glasses that casted interesting shadows. The highest windtower in Yazd loomed above it. 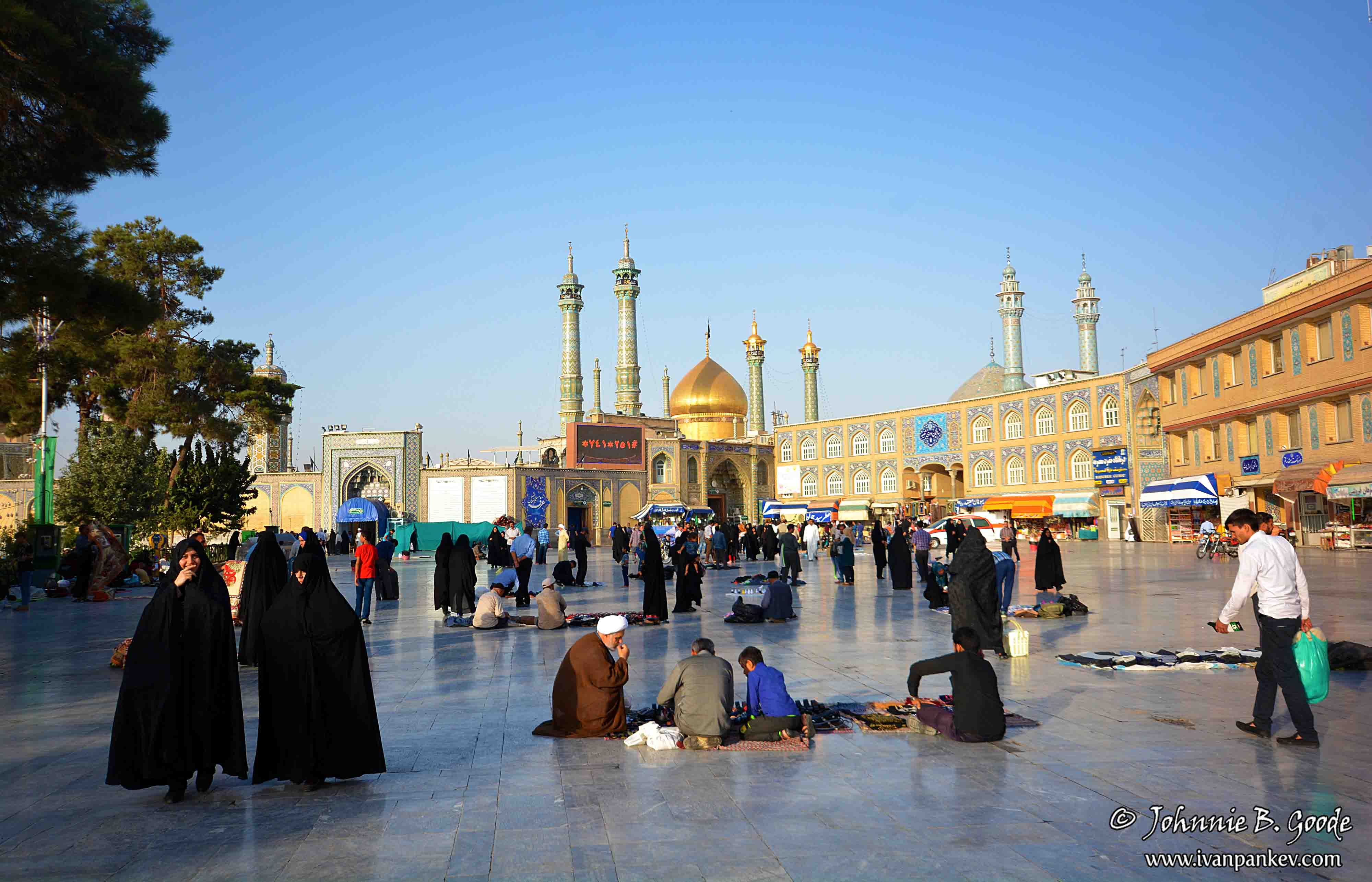 Qom was home to both the hardline clerics, ruling the country since the overthrow of the Shah in 1980, and Hazrat-e Masumeh shrine – the second holiest site for Shia Muslims in Iran after Mashhad. Fatima, sister of Imam Reza, was buried here. Foreigners were allowed to walk around the yard accompanied by a guide, but the tomb itself was off limits. During the tour my guide explained me some of the main differences between – Sunnis and Shia. 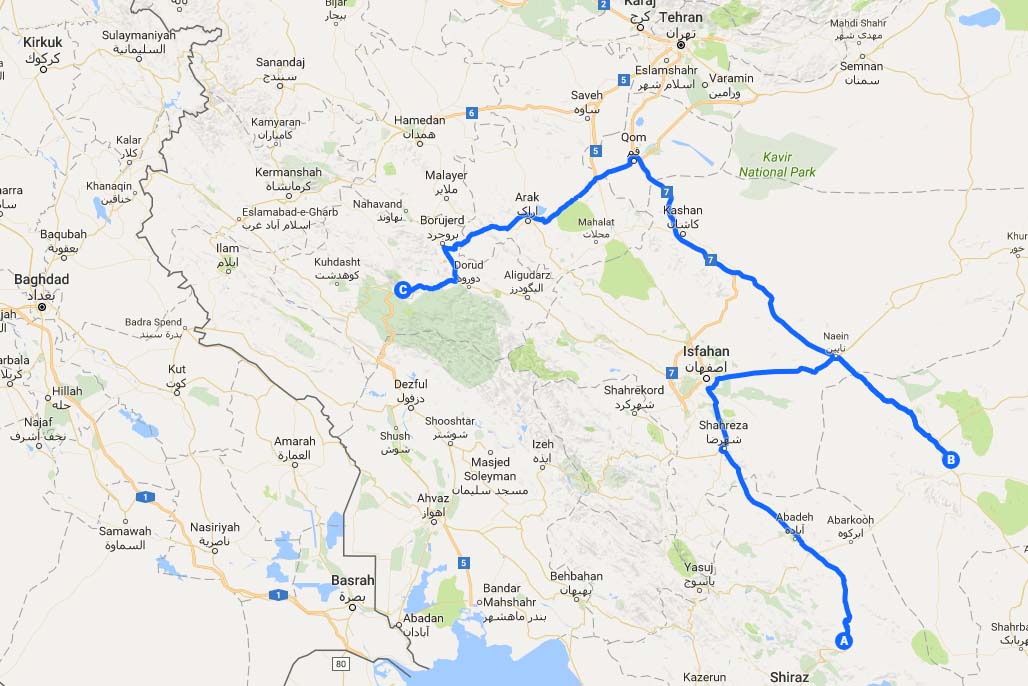 In December 2012 I visited “The End of the World” – Ushuaia. It took me almost 3 years to get to its “middle” – Mitad del Mundo (the equator). Now I walked around “Half of the World” (Isfahan). What else could I do except take the way home, of course, the longest one.

A short video of an Iranian birthday party: