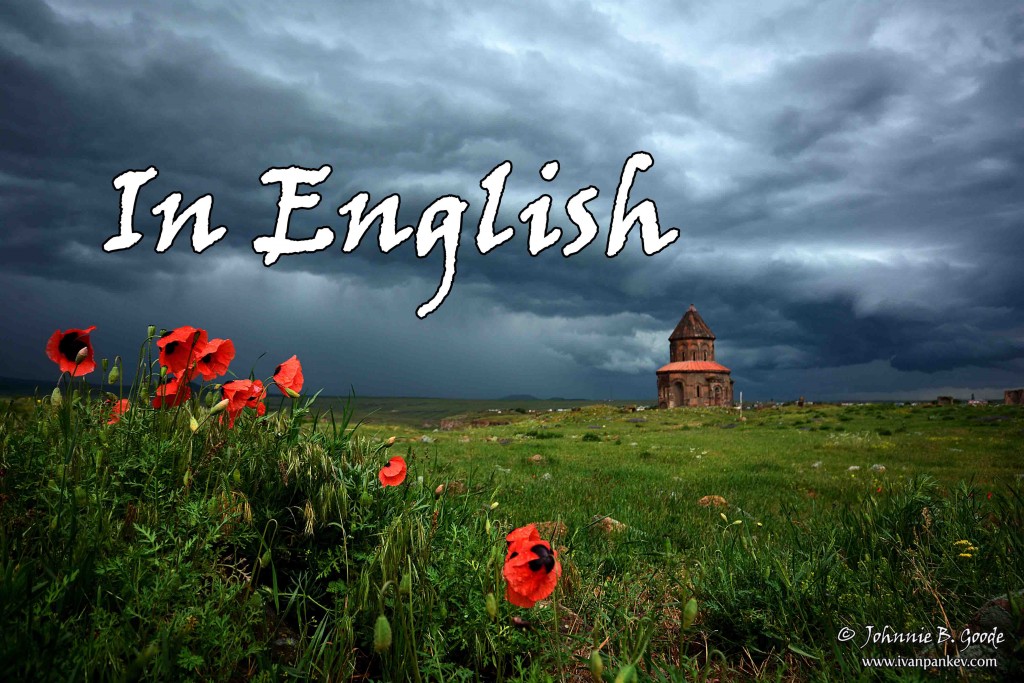 Once we reached Antalya and finished the 512 kilometers of the Lycian way for 20 days of walking (+2 days off), the journey entered a new stage. Tatyana caught a flight back home and it was time for me to go on my own. In addition we were travelling only on foot, but now I switched to hitchhiking. This allowed me to cover much longer distances. 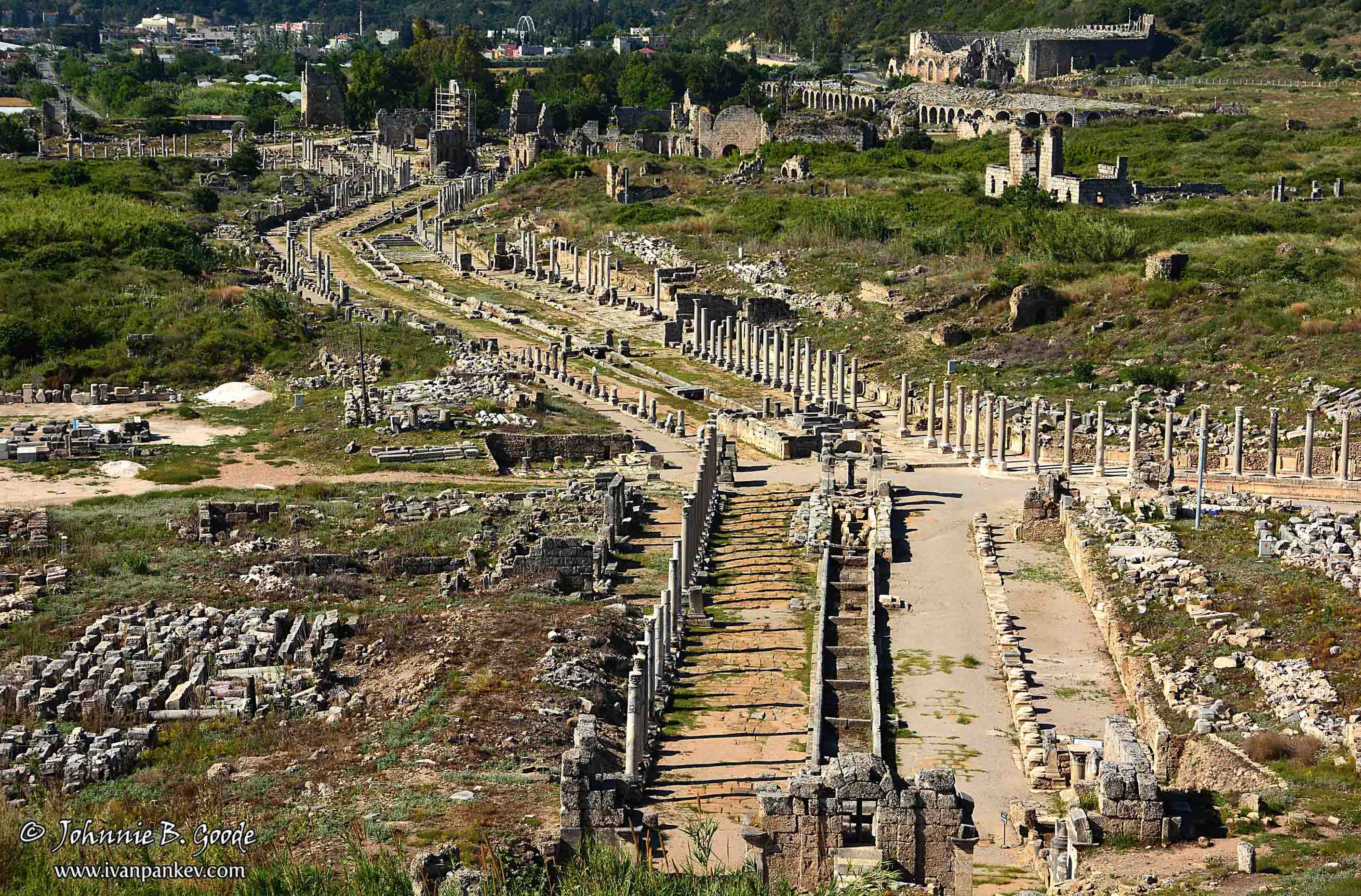 Other aspects remained the same – I continued to move along the Mediterranean with frequent stops for checking out the numerous ruins. First was Ancient Perge, its size and degree of preservation was a nice surprise. I cannot say the same for its entry fee – 20 Turkish Liras. Walking the Way, we saw dozens of ancient cities for free because they were unattended or it turned out that we had entered through the exit. Now I bought a combined ticket for all archaeological sites along the Mediterranean coast of Turkey (60 Liras). It included the already visited. Sooner or later you pay for everything. 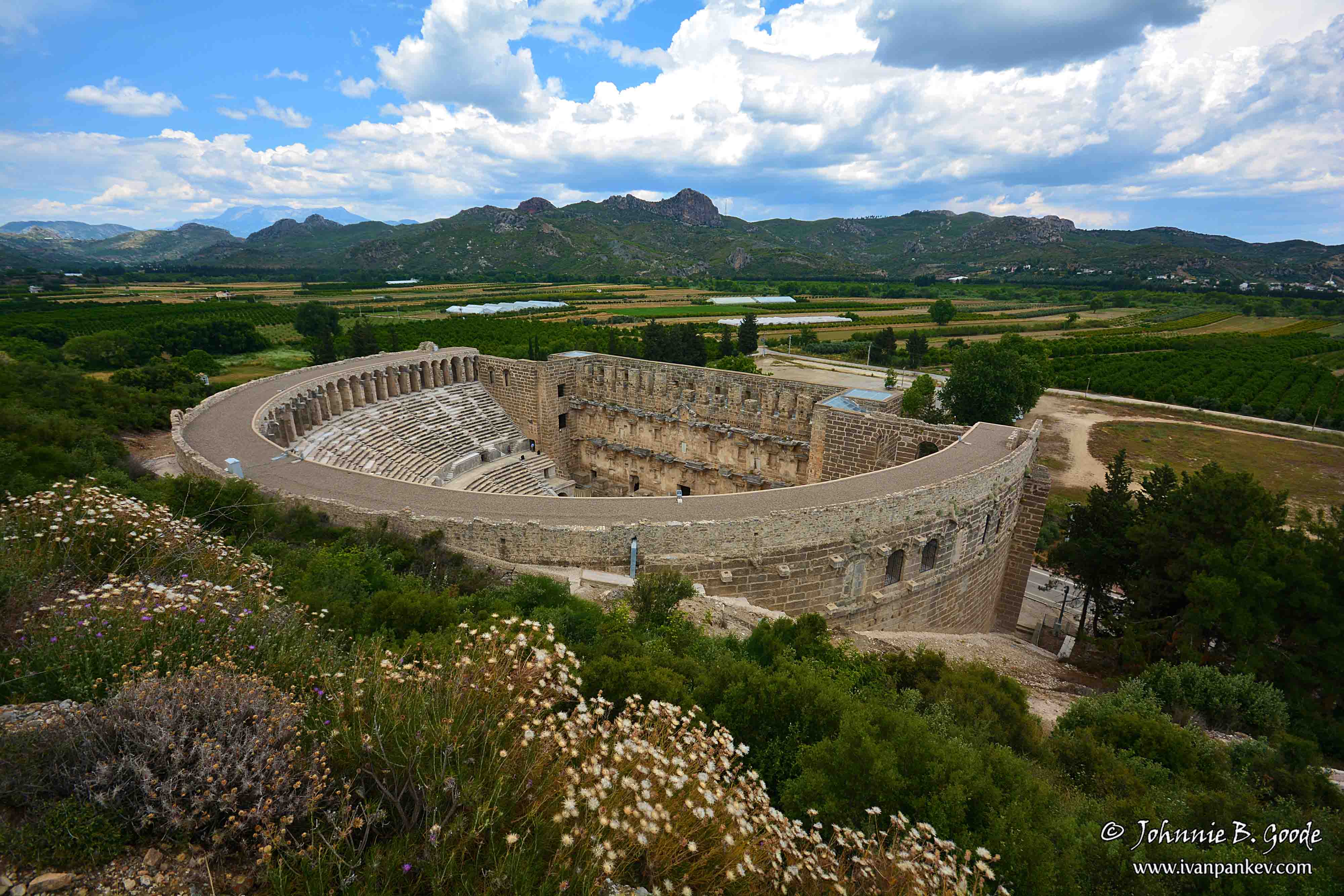 In Ancient Aspendos I convinced myself I had made a smart move. The entrance tickets for the sights around Antalya were quite expensive. Besides several other ruins and a nice view the place boasted the most preserved amphitheater in Asia Minor. Fairy – like a movie setting! 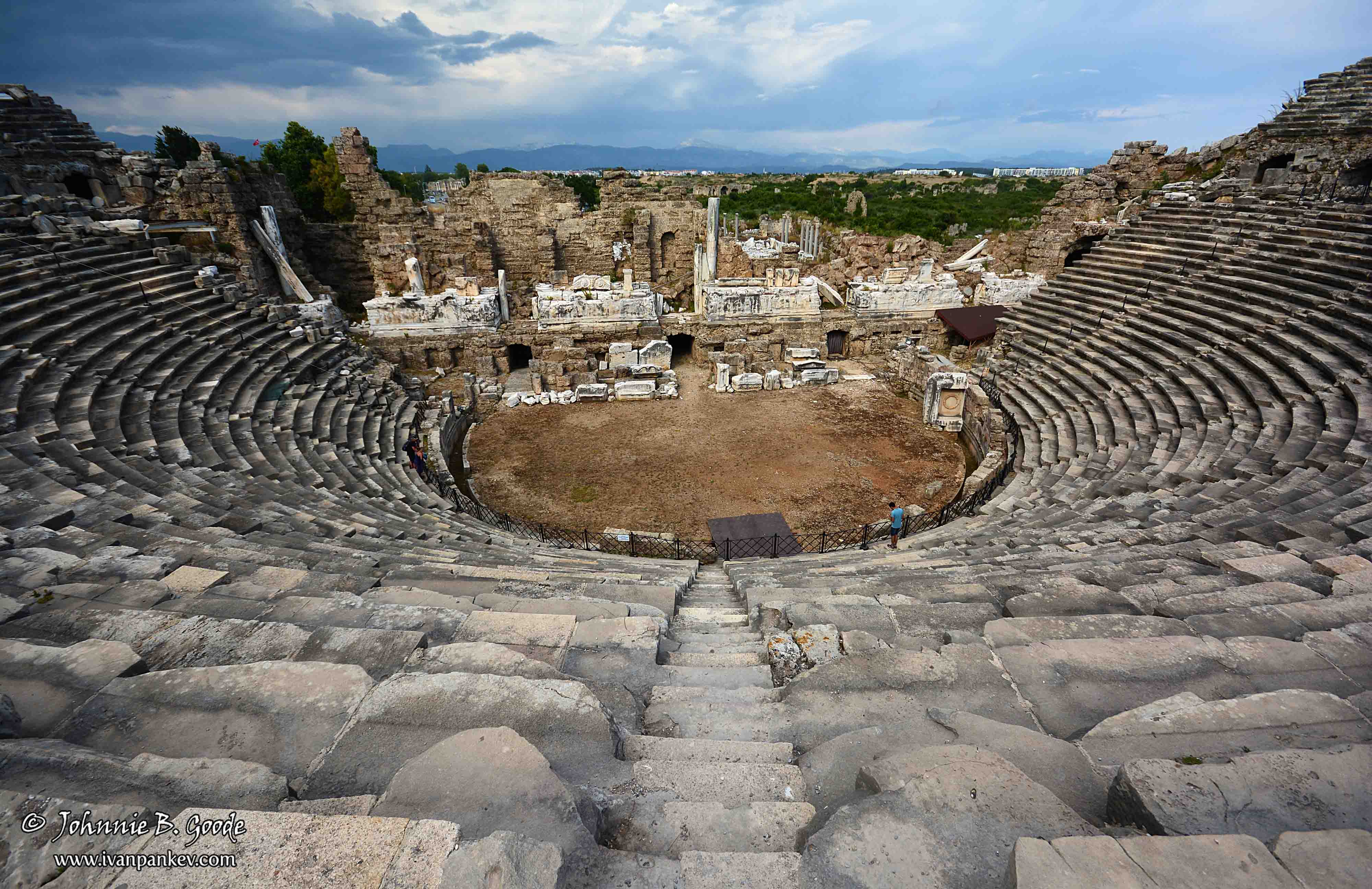 The theater in Ancient Side was no less impressive, lacking only a stage building – scaenae frons. According to Lonely Planet the city’s Temple of Apollo was “one of the most romantic and moving ruined sites you are likely to encounter in Turkey”.  Do not believe everything you read in guidebooks – 5 upright columns near the seaside. 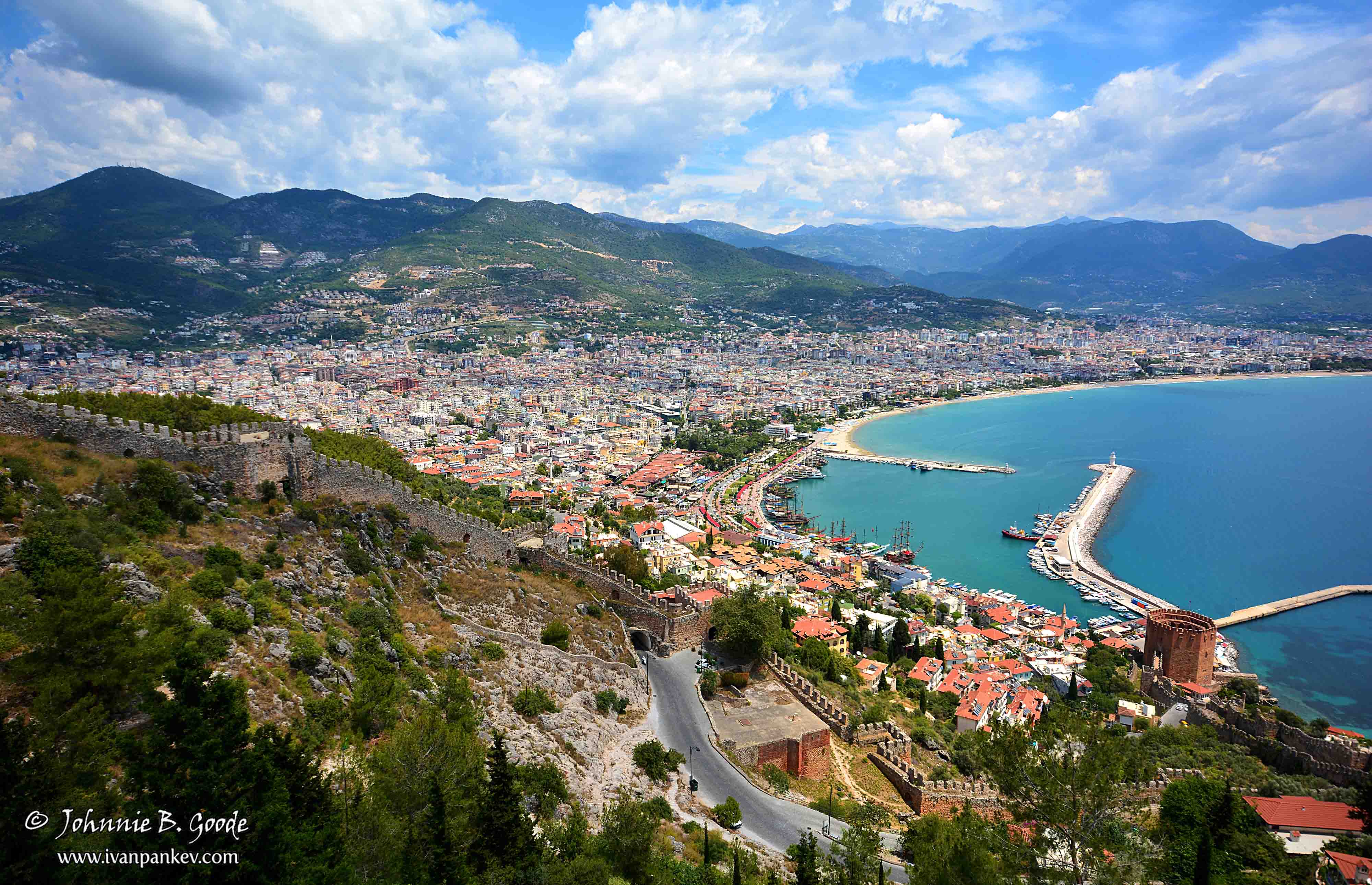 Alanya’s fortifications were some of the most extensive I’ve ever visited. They included long walls, several defensive towers, a central citadel, a huge octagonal tower at the port called Kızıl Kule (Red Tower), because it was built of red bricks, a turret and even a shipyard. All that topped with wonderful panoramic views. I’m a huge fan of castles, so it is no surprise that I wandered around for 4 full hours. 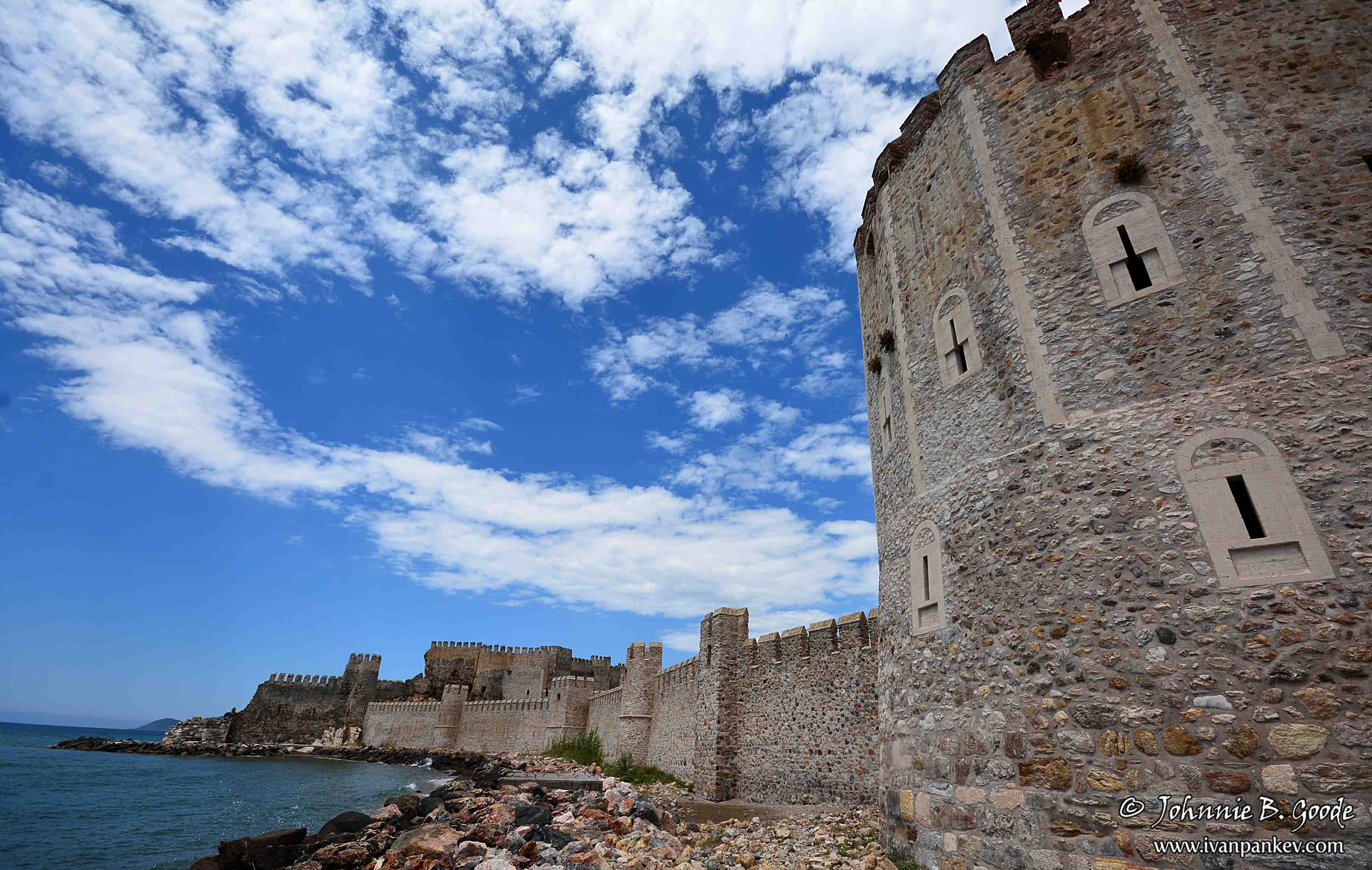 Ancient Anamurium was interesting mostly because of quantity – occupied area and number of buildings – rather than quality. However, the information boards announced that the necropolis was one of the largest in the Roman world and the odeon – the best preserved in Turkey. And the nearby Mamure castle claimed to be the biggest and best-preserved fortification on either Mediterranean cost. In other words, the Macedonians are not the only ones who purport to be the best at everything.

Cehennem Çukuru (Gorge to Hell) was a nice change after a long series of ancient ruins and castles. Locals believed that it is one of the entrances to Hell. According to the legend the underground stream that flows through it connects at some point with Styx, the river that separates our world from the Underworld. 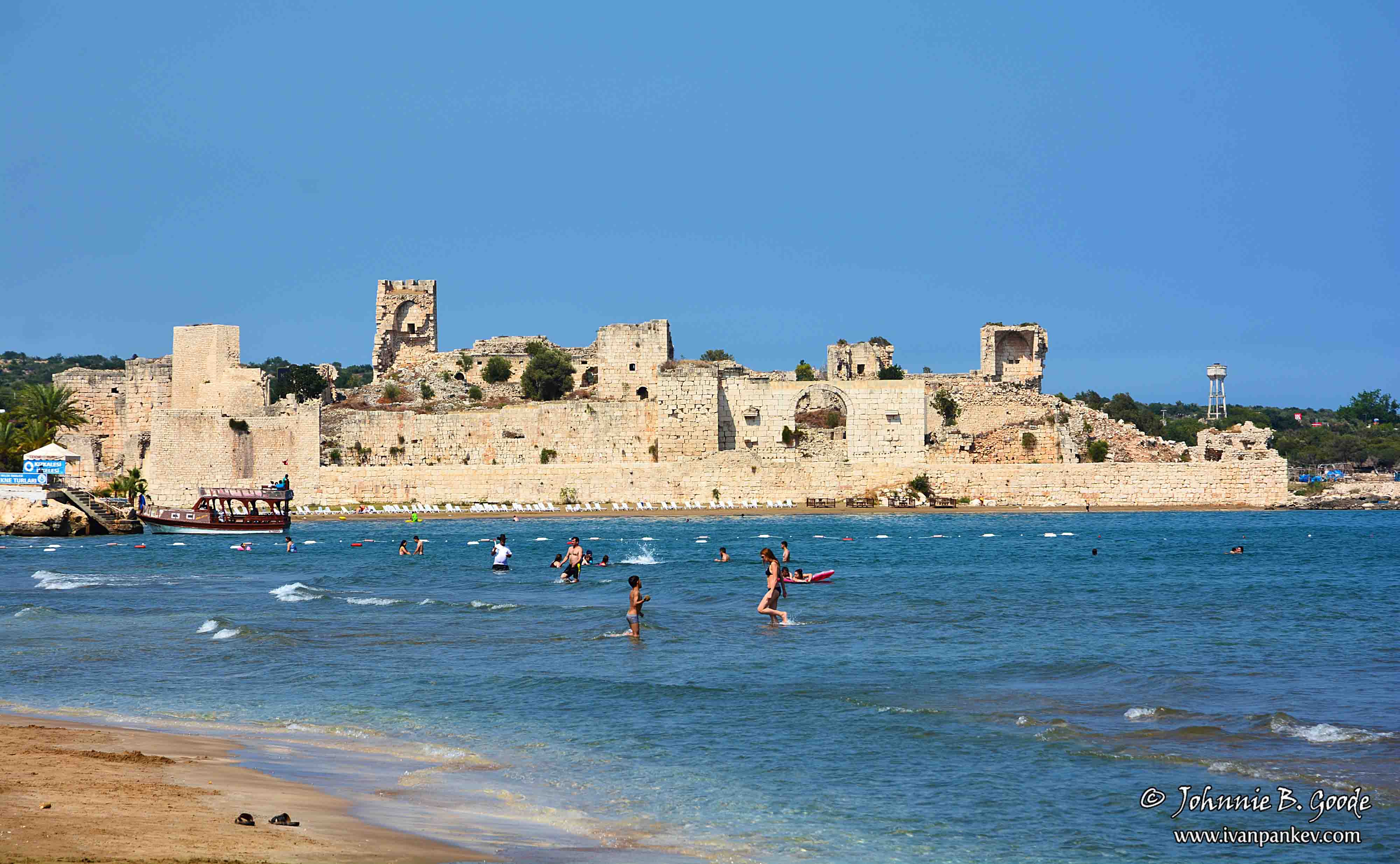 The small seaside resort of Kızkalesi attracts tourists with its sandy beach and calm sea rather than its two castles – Kızkalesi and Korykos. Totally understandable – they had already begun to bore even me, and this is not easy (meanwhile I had also visited the castles of Softa and Silifke and the ruins of Ancient Elaiussa-Sebaste and Ancient Canytelis). 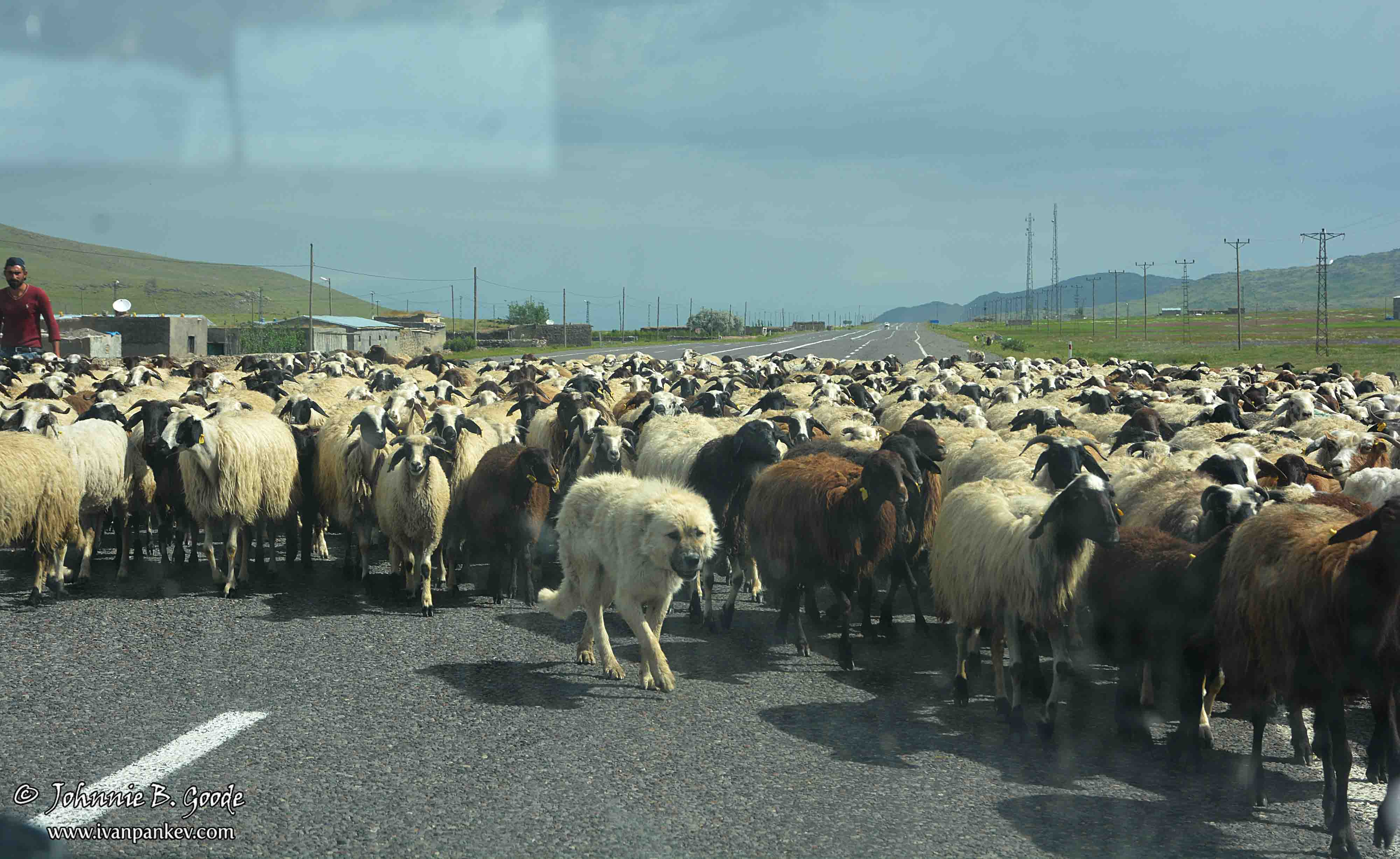 After passing through Mersin and Adana I finished the tour along the Turkish northern Mediterranean coast. Because of the recent terrorist attacks in Gazientep and Diyarbakır I gave up the idea to visit these cities and took a bypass road through Malatya towards Lake Van. 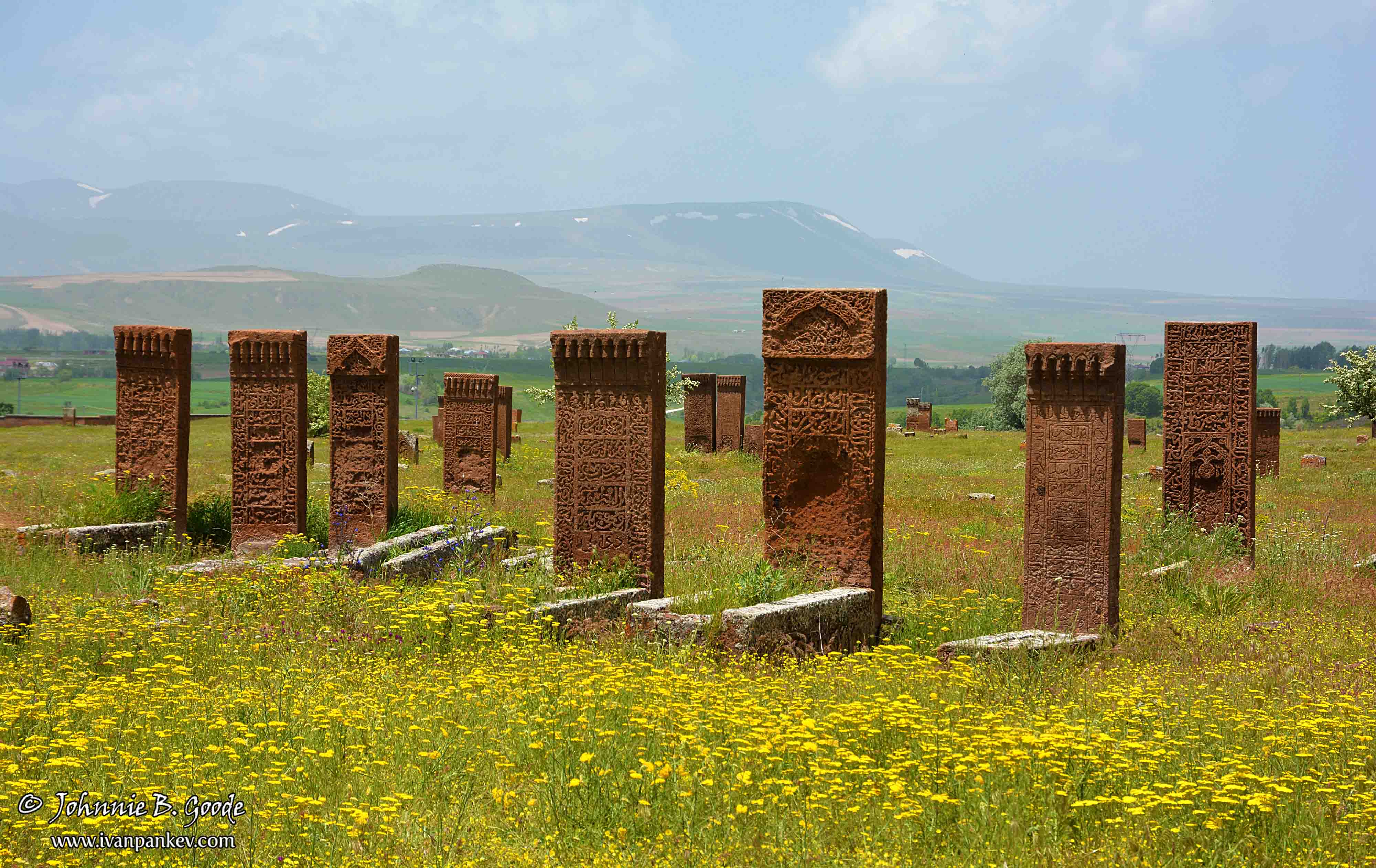 Shortly before sunset I hitched a 5-km. ride with an old man and had the following conversation:

Before saying goodbye he insisted:

– Are you sure you do not want sex?

My knowledge of Turkish wasn’t enough to explain to him that I have rarely been more sure of something in my life. 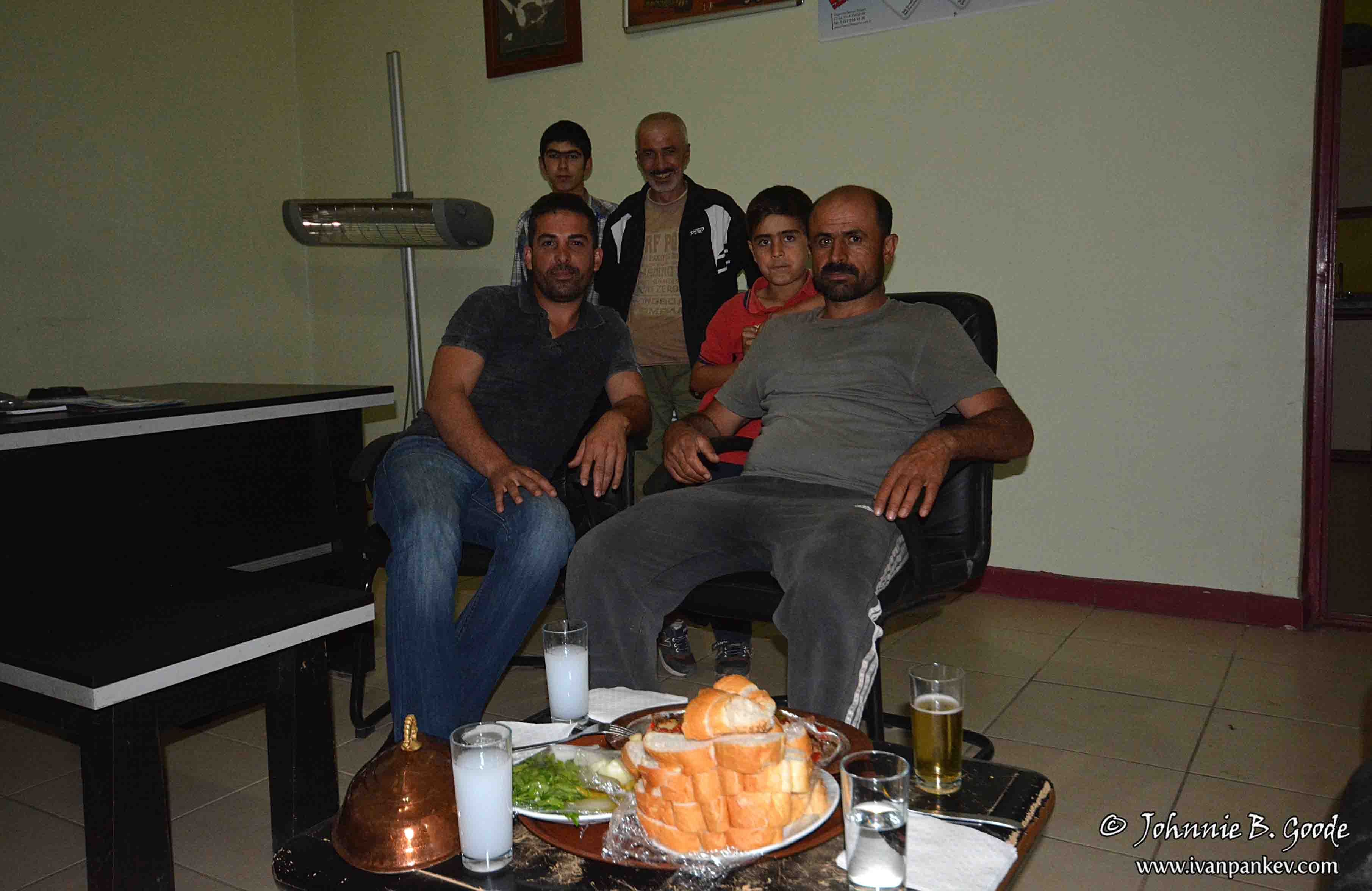 Travelling inland away from the touristy Mediterranean the locals became more open and friendly, and the tea invitations more common. One such offer was made at the end of the day by Barış from Narlı. It went on into the night as a dinner of beef morsels with peppers and lots of garlic, washed down with yeni rakı. Later he offered me to spend the night in his office. I don’t know whether it was because Barış locked me inside before he went home or because of the dozen cups of the theine-rich drink I had drank that day, but I couldn’t fall asleep for a long time. 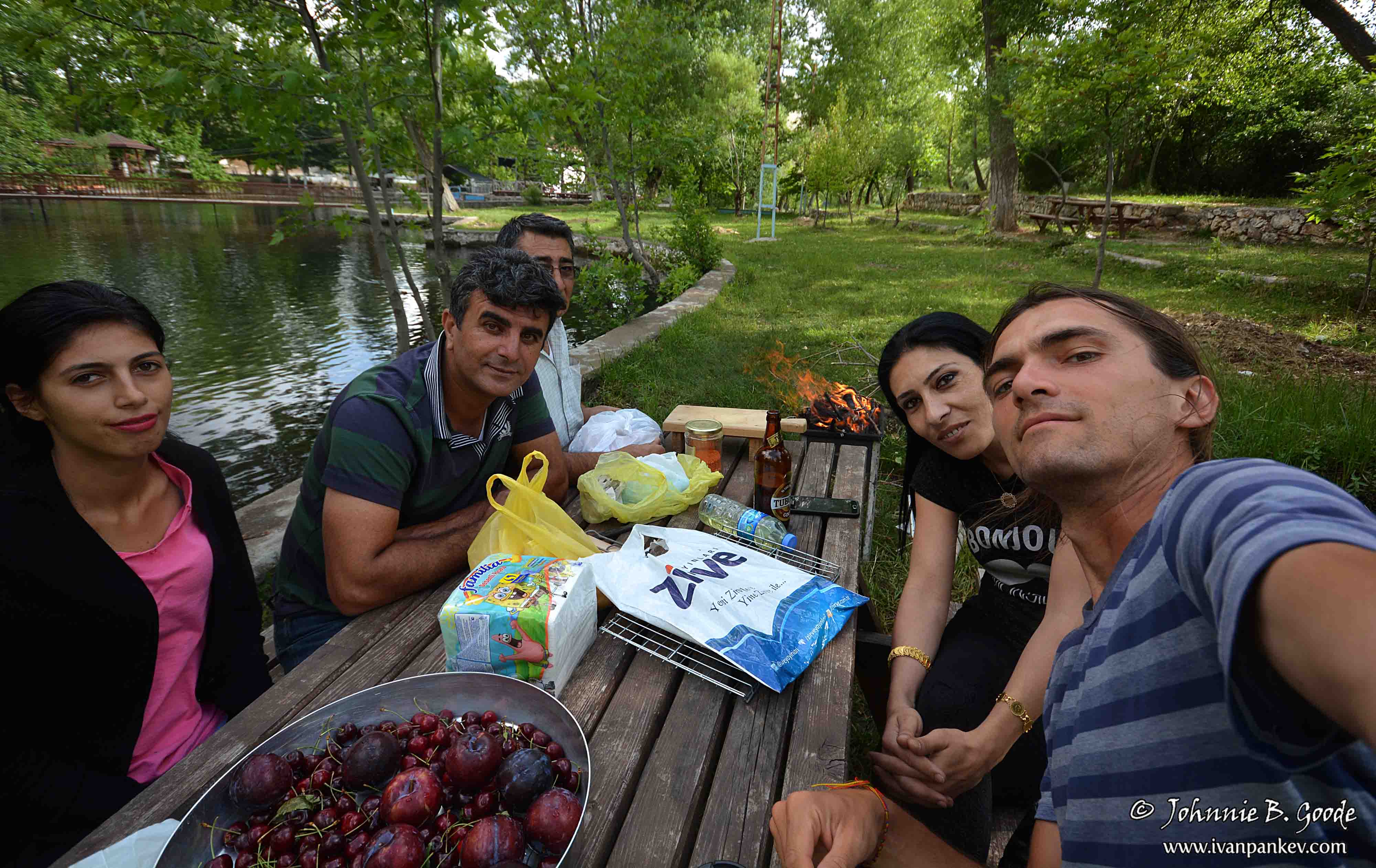 It was past noon, the sun scorching hot. I hadn’t had breakfast and I was waiting for more than an hour at the end of Gölbaşı. I hitched a ride in a small car with 4 other persons. The windows were pulled down, load party music was on and a bottle of beer was shoved into my hand. Soon we stopped for a picnic. They took out a tray of cherries and plums, lit the barbecue and put peppers, tomatoes, onions, bread and chicken nuggets on it. We were full before we get to the fish, and there was one per person.

I was more than 1500 km. away from my hometown, but I felt at home. Probably because we were fellow-citizens – they lived in the Turkish Pazarcık, Karamanmarash. Then they gathered the left-overs in a plastic bag and gave it to me “for later”. After that they stood with me by the road, waved down a bus and paid my ticket. That was my first encounter with Kurdish Alevis. 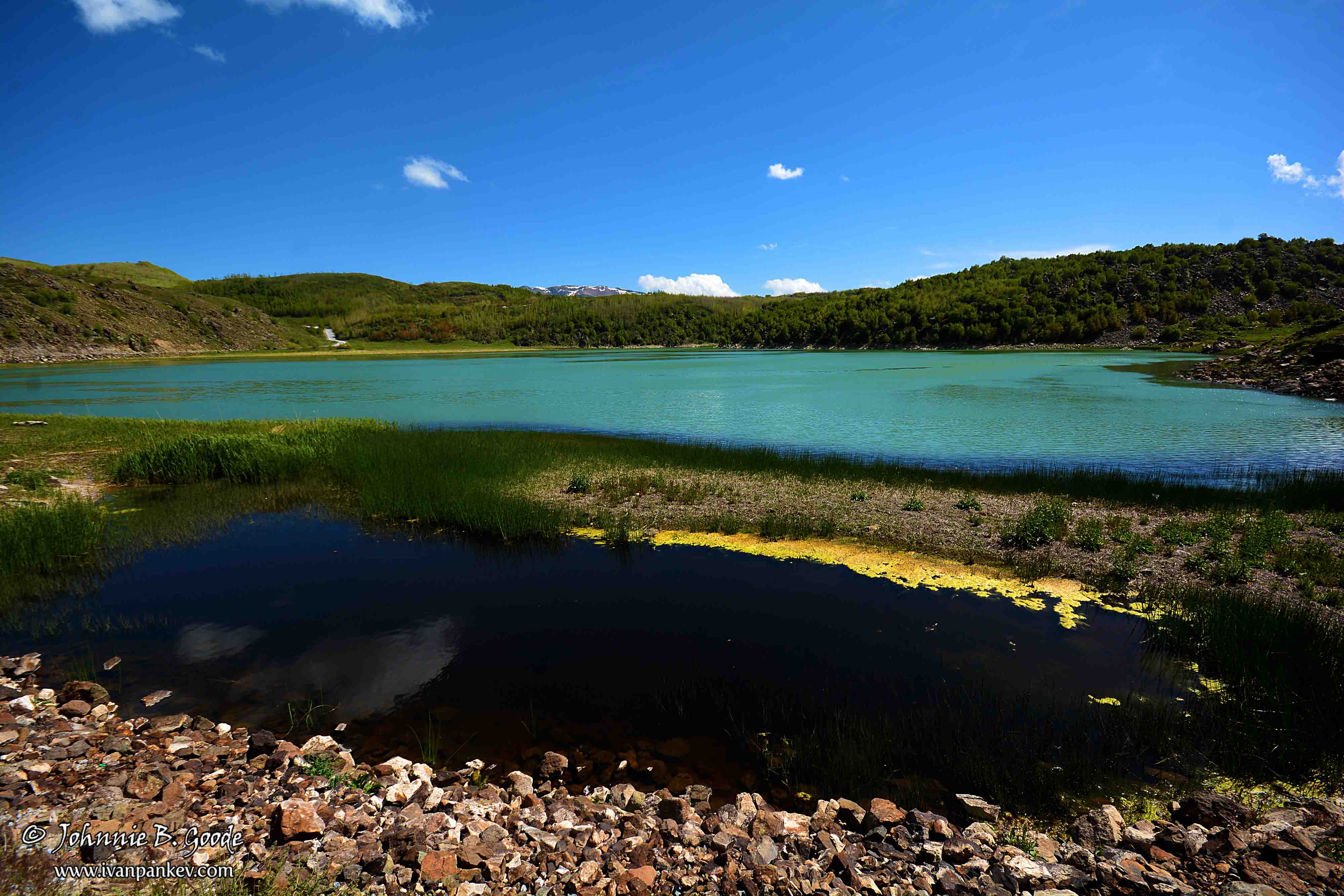 Nemrut Dağı was a disappointment. I had imagined it a volcano, whose crater is filled with a nice lake. Something like the Ecuadorian Laguna Quilotoa and Laguna Cuicocha. But it had such a large caldera that several car roads passed through it, one of them paved. 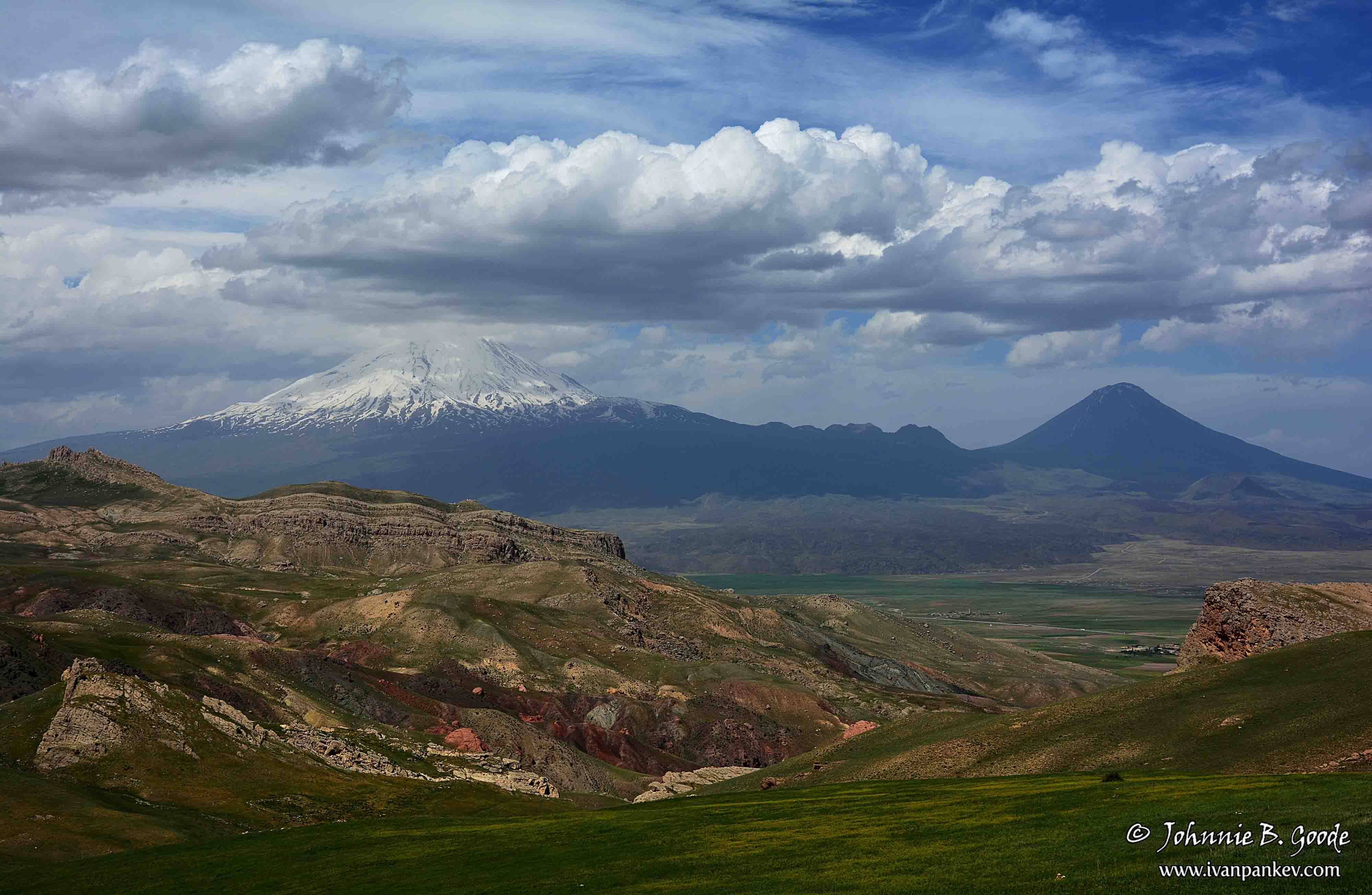 Doğubeyazıt welcomed me with impressive views of the ice-covered slopes of the sacred for the Armenians mountain Ararat and the question of a 14-year-old boy:

– Do you love terrorists?

I was in the very heart of Turkish Kurdistan. 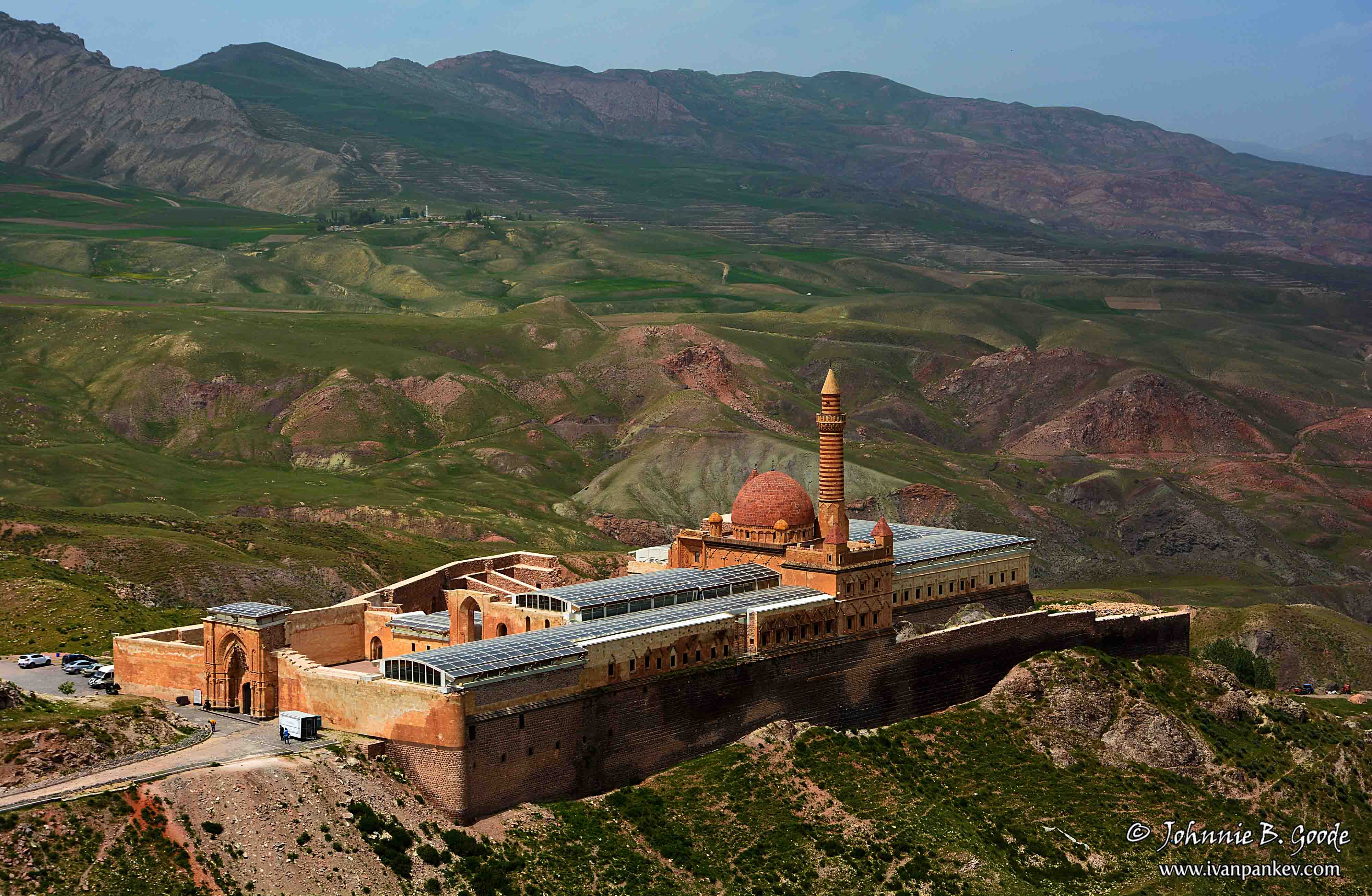 That did not stop me from visiting the biggest attraction in this region of Turkey – Ishak Pasha Palace. The building had a great location and beautiful exterior, but almost no interior decoration. Then I made a long, 20-km. walk through the surrounding hills. I enjoy the greenery and the views of the snowy mountain, hitched a ride with a tractor for 2-3 km., went through 10-house villages where the fuel for the winter – cow dung bricks – was laid around to dry in the sun and visited the so called “Noah’s Ark” – an elongated oval shape in stone that is supposed to be an imprint of the famous biblical boat. 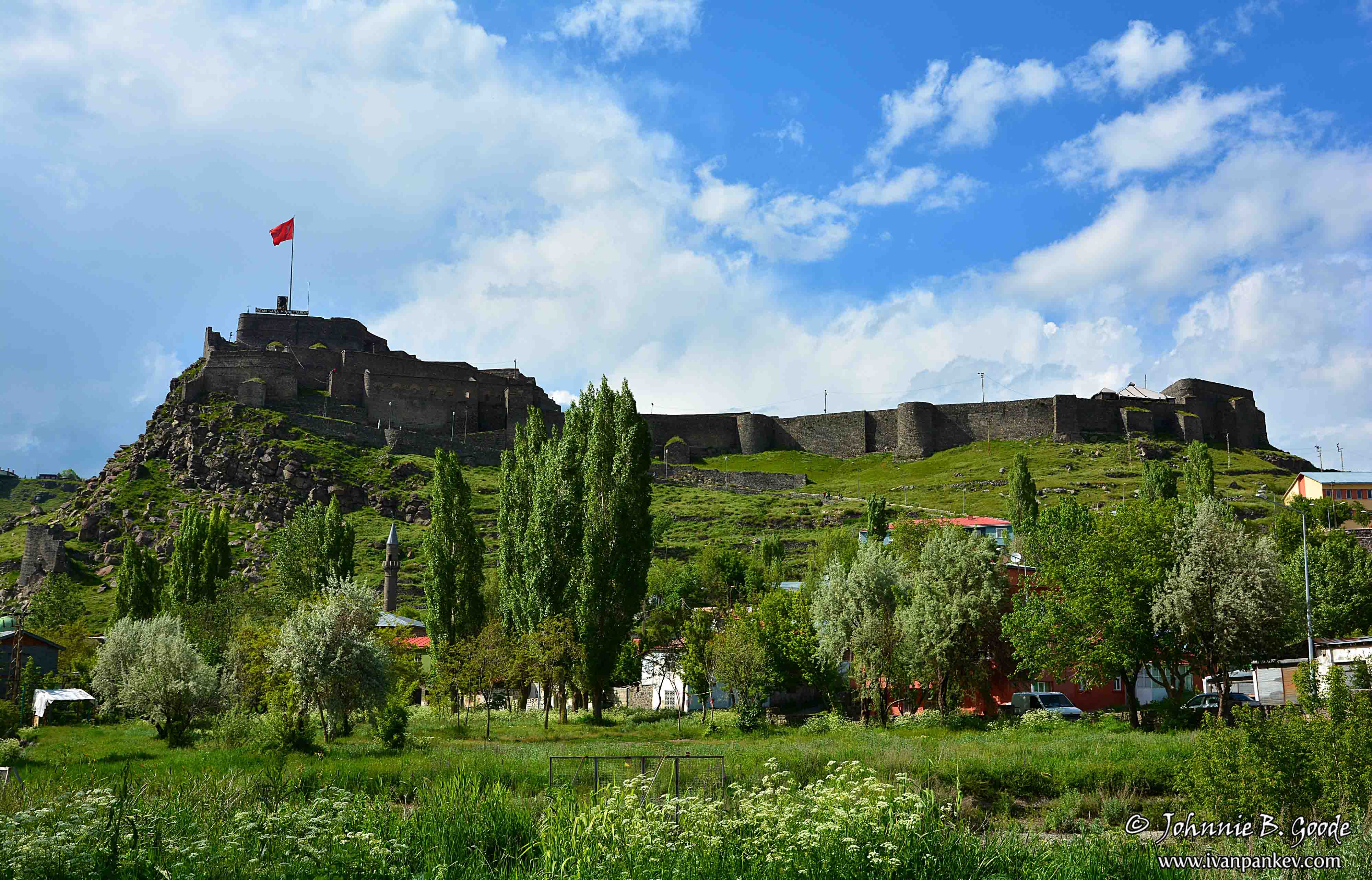 I was walking around the Castle of Kars, taking pictures, when two kids (I can’t call them teenagers, for I’m not sure they had even 13 years) started to whistle and shout at me, but I ignored them – I am not a dog. Then one of them pulled out a big folding knife, which he unsuccessfully tried to open. Ridiculous situation – should I laugh or cry. That invoked some unpleasant  South American memories. I took off my backpack in order to pull out my own knife. Just in case. The brats bolted without waiting to see what I’m going to do.

My journey had no specific plan or itinerary,only a general direction – east. One of the few things that I really wanted to see were the ruins of the ancient Armenian capital Ani (now in Turkey), part of the UNESCO World Heritage List. They were located in a vast green plain and consisted of a relatively preserved city wall and several  scattered churches in various stages of destruction. I happened to be there at the best (from a photographic point of view) moment. To make this frame it was only necessary to overcome my instincts. Then I ran as fast as I could towards the distant shed in an attempt to save my equipment, while the hail lashed me across the face. 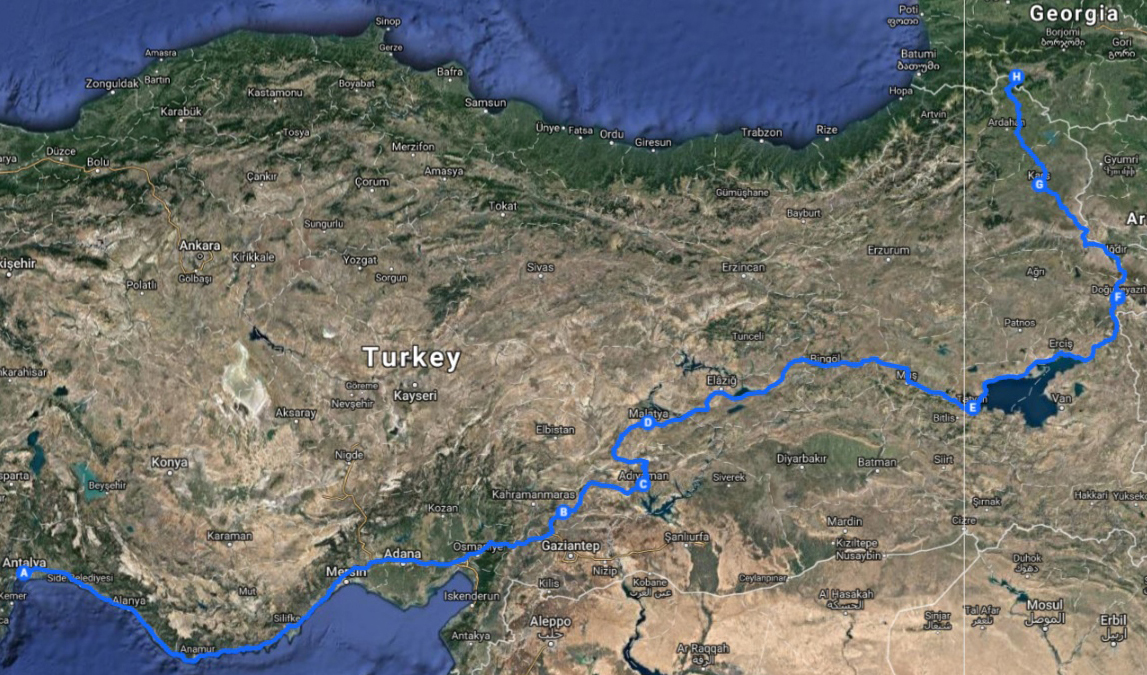 After 40 days in Turkey it was time to leave the country and enter unknown to me territory – the former USSR.