This is the story of my 5-month eastern journey through Turkey, Georgia, Abkhazia, Azerbaijan, Armenia, Nagorno Karabakh and Iran. Many funny incidents and numerous UNESCO World Heritage Sites.

My stay in Iran was brimming over with historical sites and numerous curious meetings with locals. But the end of my 30-day visa was approaching and I forced myself into even more hectic rhythm trying to visit more places.

Falak-ol-Aflak was extremely preserved Sassanid fortress and the only reason for my visit to Khorramabad. The price of the entry ticket for foreigners of 430,000 Rials (50,000 Rials for locals) pissed me off and I refused to enter. This was way too much! 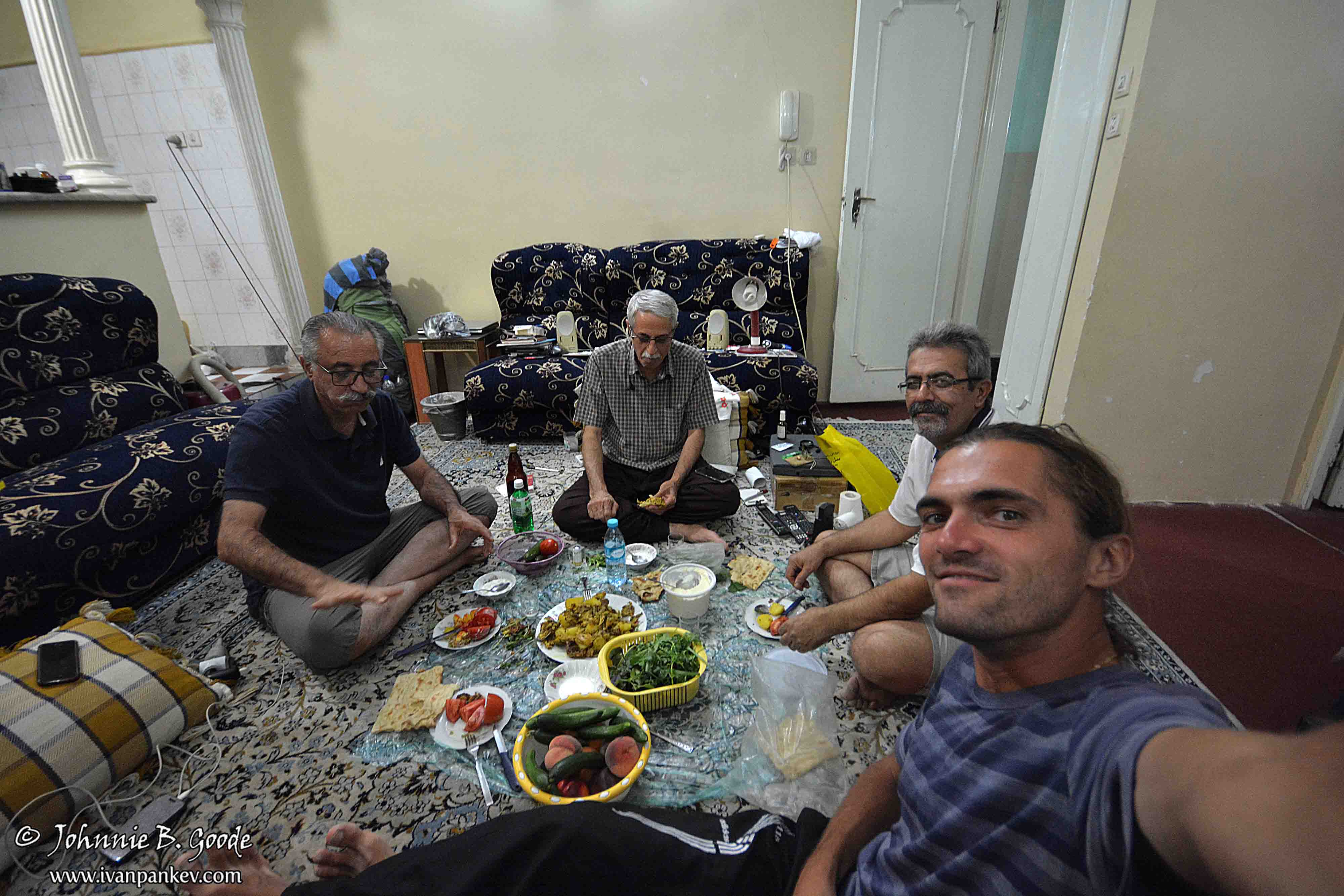 That’s why I came across Bijan and his two friends. He invited me to dinner with them and to watch a football game from the local championship. Then he spread a blanket on the floor and I fell asleep while my host was watching the US Open final game between Djokovic and Wawrinka. 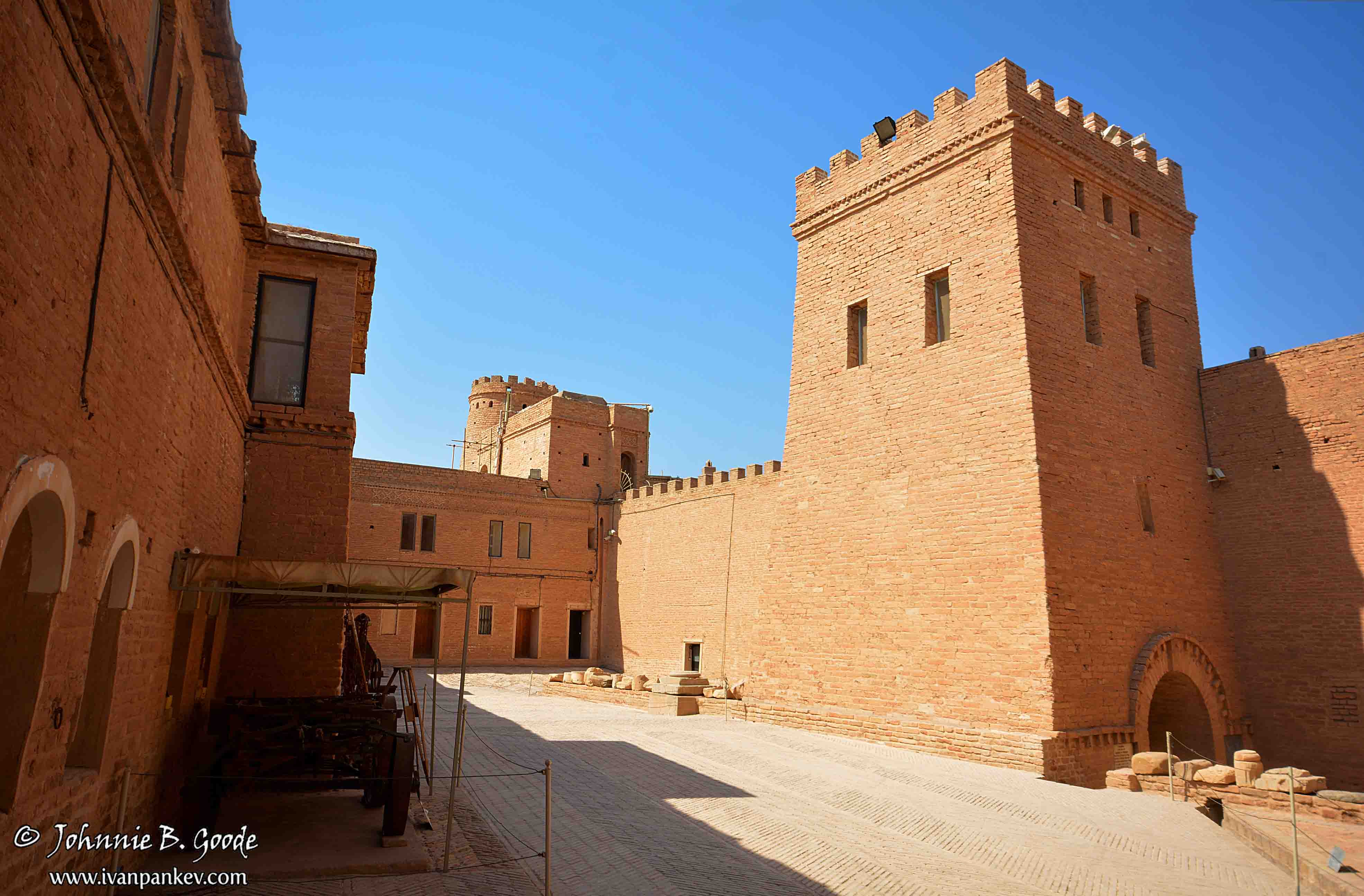 The ruins of Ancient Susa, a UNESCO World Heritage Site, consisted only of half a meter high foundations, fragments of columns and a sculpture of a bull. More interesting here was the castle built by the first archaeologists in the late 19th century. There were exhibits of machines used in the excavations.

The nearby ice-cream-like tomb was claimed to be the burial place of the Old Testament prophet Daniel. Here I met the Poles Mateusz and Przemek. They were looking for more people for a shared taxi to Choqa Zanbil. I convinced them to try to hitchhike. I beat them by an hour, hitching a ride in 6 different cars. They managed to reach it only in one.

Choqa Zanbil was definitely worth it. A beautiful ziggurat, one of the very few outside Mesopotamia, considered the best preserved in the world. In 1979 it became the first Iranian site to be inscribed on the UNESCO List. As if it weren’t enough the sunset light was perfect. 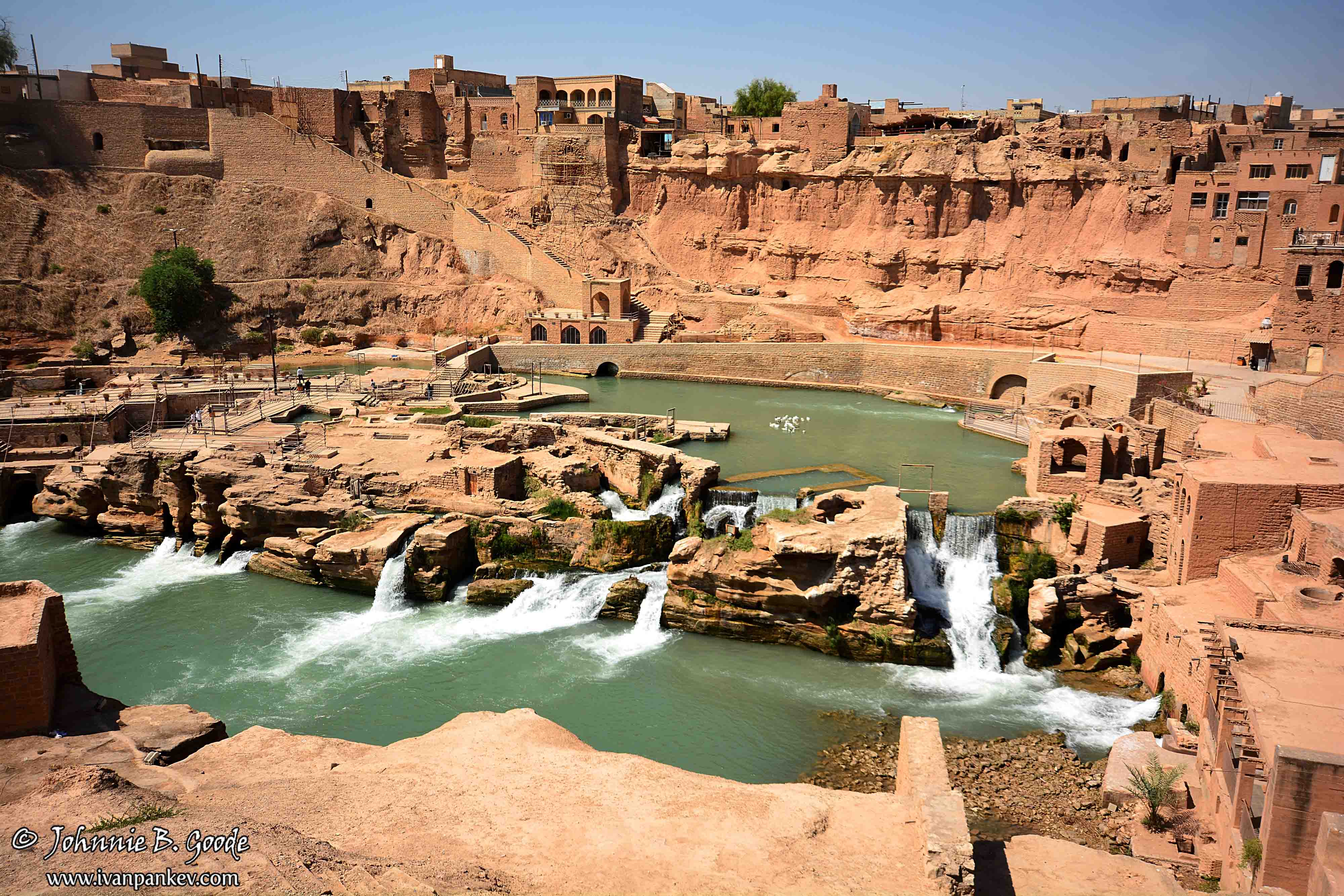 Together with the two Poles we hitchhiked to the watermills in Shushtar, part of the UNESCO World Heritage List. They were built by Darius the Great in the V century BC, included two artificial drains of the Karun river and consisted of a series of canals, tunnels, dams and watermills. In other words – a true masterpiece of the architectural genius of Ancient Persia.

It was believed that the Salosel castle had held as a prisoner the Roman emperor Valerian himself, while his soldiers had been building the nearby Band-e Kaisar, the easternmost Roman dam and bridge in the world. All left of the citadel now were only a few pitiful remnants. On the other side the underground canals and water cisterns were yet another curious place.

The hitchhiking took me to a police post whose sergeant refused to let me follow my thumb because it was dangerous. He insisted to me give me a free ride in a bus to Tabriz (1000 km.). I agreed to take it to Kermanshah (180 km.). There I met the brothers Ali and Hussein with their wives and children and some friends who invited me to share their breakfast. I was impressed by the fact that they knew the word “hitchhike” and understood its meaning.

Together we visited Taq-e Bostan – another UNESCO site. The several-thousand-year-old bas-reliefs carved in the rock were an intriguing sight. Unfortunately the light was not suitable from a photographic point of view.

The Bisotun Archaeological Park was also a part of UNESCO, but definitely not worth the money for the entry ticket. The main attraction – the bas-relief with the coronation of Darius the Great – was hidden under restoration scaffoldings. It would have been disappointing if it weren’t for the yellow landscape of sheer cliffs and the few other scattered ruins – a curious bas-relief of a naked Heracles, foundations of an unfinished palace and a preserved caravanserai, now functioning as a hotel. 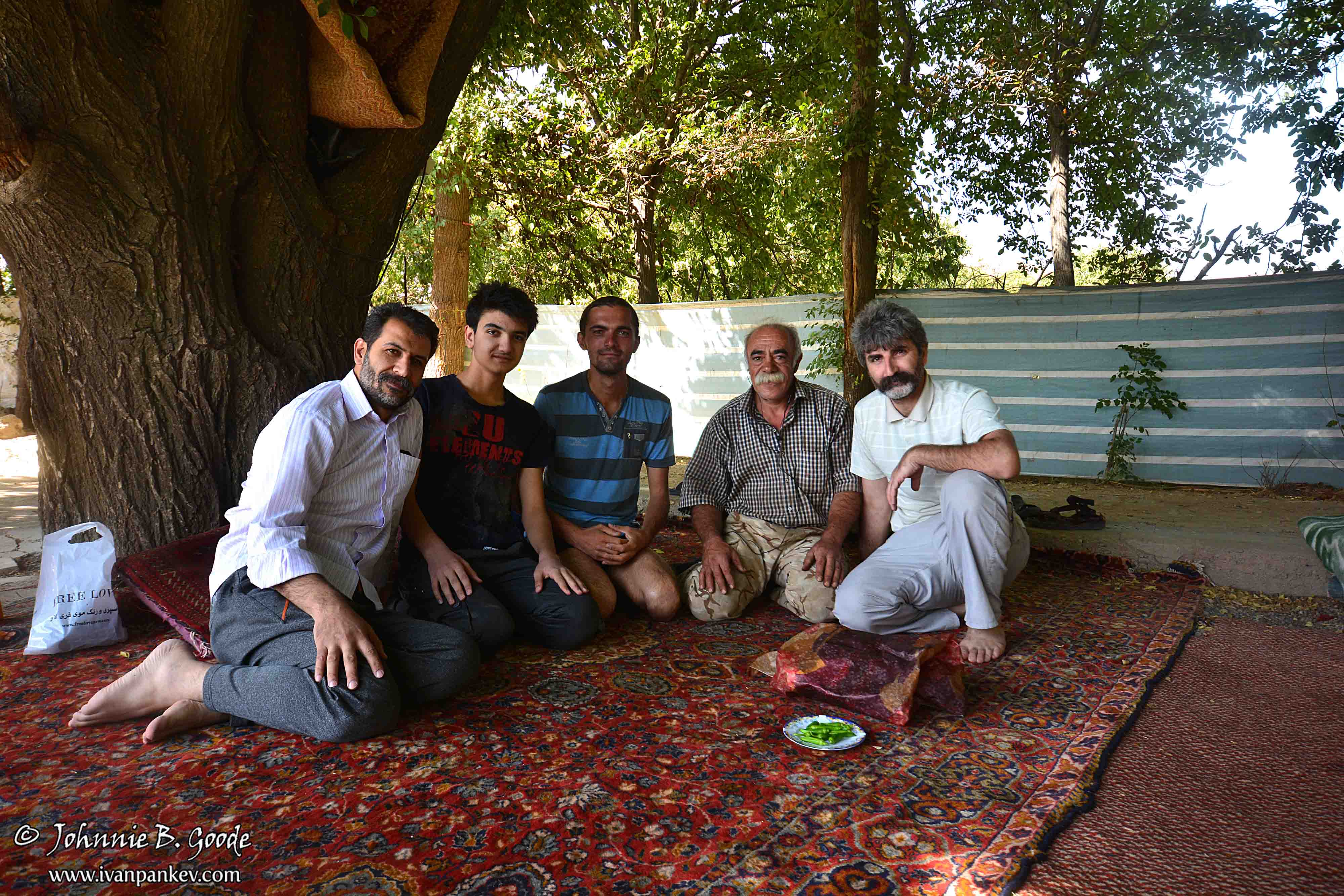 The communication with the good-natured Bahman was difficult, but nonetheless he invited me to his home to take a rest. Near the small concrete house there was an artificial pool in which I cooled off. My hosts treated me to scrambled eggs with tomatoes and bread. They told me that they were Kurdish Sufis and their distinctive character was the mustache, while Muslims’ was the beard.

I told them that I had visited the tomb of Rumi in Konya and I had attended a Sema ceremony. They rejoiced and commented that my name was Sufi. They started calling me “Dervish Ivan”.

From the outside the tomb of Avicenna – one of the most significant figures of the Islamic Golden Age and widely regarded as the “father of modern medicine” – looked like an ugly concrete rocket. The price for entry was 200,000 Rials. They did not receive anything from me, I was fed up.

It was believed that the remains of the biblical queen of Jewish origin Esther and her uncle Mordecai were buried inside this tomb. According to the Old Testament, she convinced her husband King Xerxes I to ignore his grand vizier Haman, who insisted on the massacre of the Jews in Persia. The story was the basis for the celebration of Purim in Jewish tradition. Because of it and Esther’s kinship with Jacob, her tomb in Hamadan was the second most sacred place for Jews after Jerusalem.

After a series of lucky rides I reached the border and left the Islamic Republic of Iran on the last day of my visa. I entered Turkey through the most godforsaken Kurdish province. In the town of Yüksekova I set my personal slow movement best. It took me 4 hours to cover a distance of 2 km., because each time I met a local he insisted to treat me to tea and to exchange a few words with me.

28 hours in my first bus in months followed – from Van to Istanbul. Then a few hours of waiting at the bus station in this megalopolis and a night bus to Sofia. I managed to get home a day before Tatyana left on a weeklong business trip. It’s good to have an end to a journey, but it’s the journey that matters in the end.

When I woke up at home, I realized that Expedition “East of the Moon, West of the Sun” – my longest journey so far – was over. Life was again easier and in the same time way more complicated.

P.S. This was my second night in a bed for the past 40 days.

That’s what my 5-month Asian walking/hitchhiking adventure looked like. The map shows 5 countries (Turkey, Georgia, Azerbaijan, Armenia, Iran) and 2 (somewhat) autonomous republics (Nagorno Karabakh, Abkhasia), 3 seas (Mediterranean, Black, Caspian) and 1 gulf (the Persian), about 20,000 km. (it’s impossible to calculate an exact number, because I crossed Armenia 2 times and Georgia – 4). But it does not display the fatigue of the Lycian Way (520 km. of trekking), the snow blizzard on Mt. Kazbek (5047 m.), the scorching heat of Qeshm Island (50°C, 100% humidity) and the incredible eastern hospitality (tens of wine and chacha toasts and hundreds cups of tea).

But it’s all in my head and more importantly – safe in my notebooks, for memories tend to fade away.

My hitchiking experience in a few minutes: