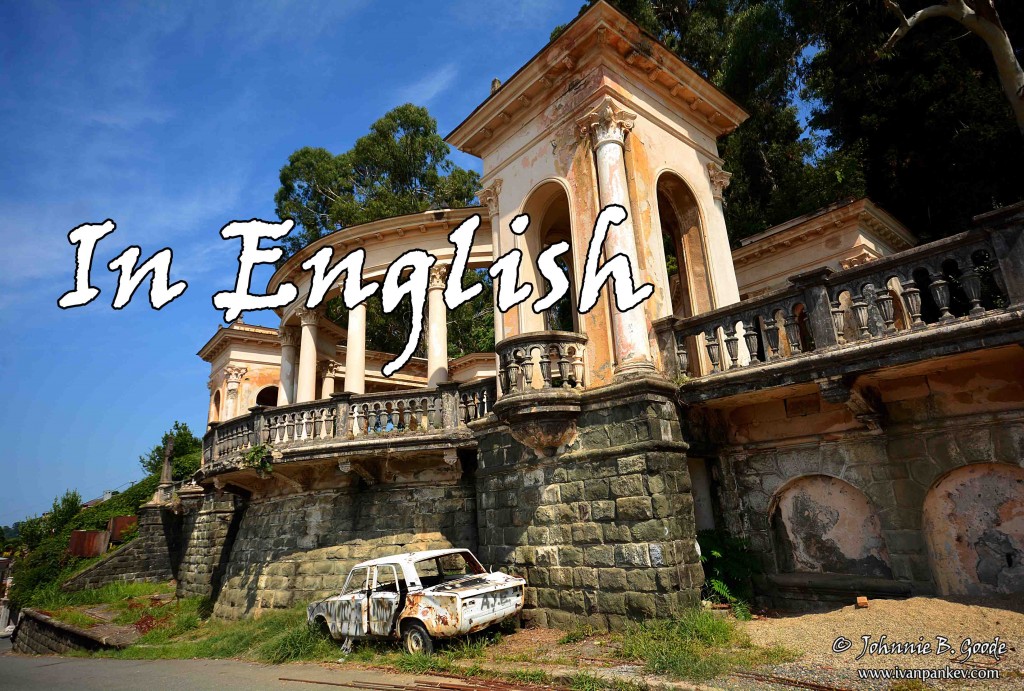 After two weeks of nice tiring “vacation” – trekking and climbing a 5-thousander with my girlfriend – I was again alone on the Road and it would remain so until the end of the journey. There would be no more “guests”. I applied for Iranian visa and I already had a letter of permission to visit the Republic of Abkhazia. There were still a few days until its entry date and I used them to check out some other sights in Georgia. 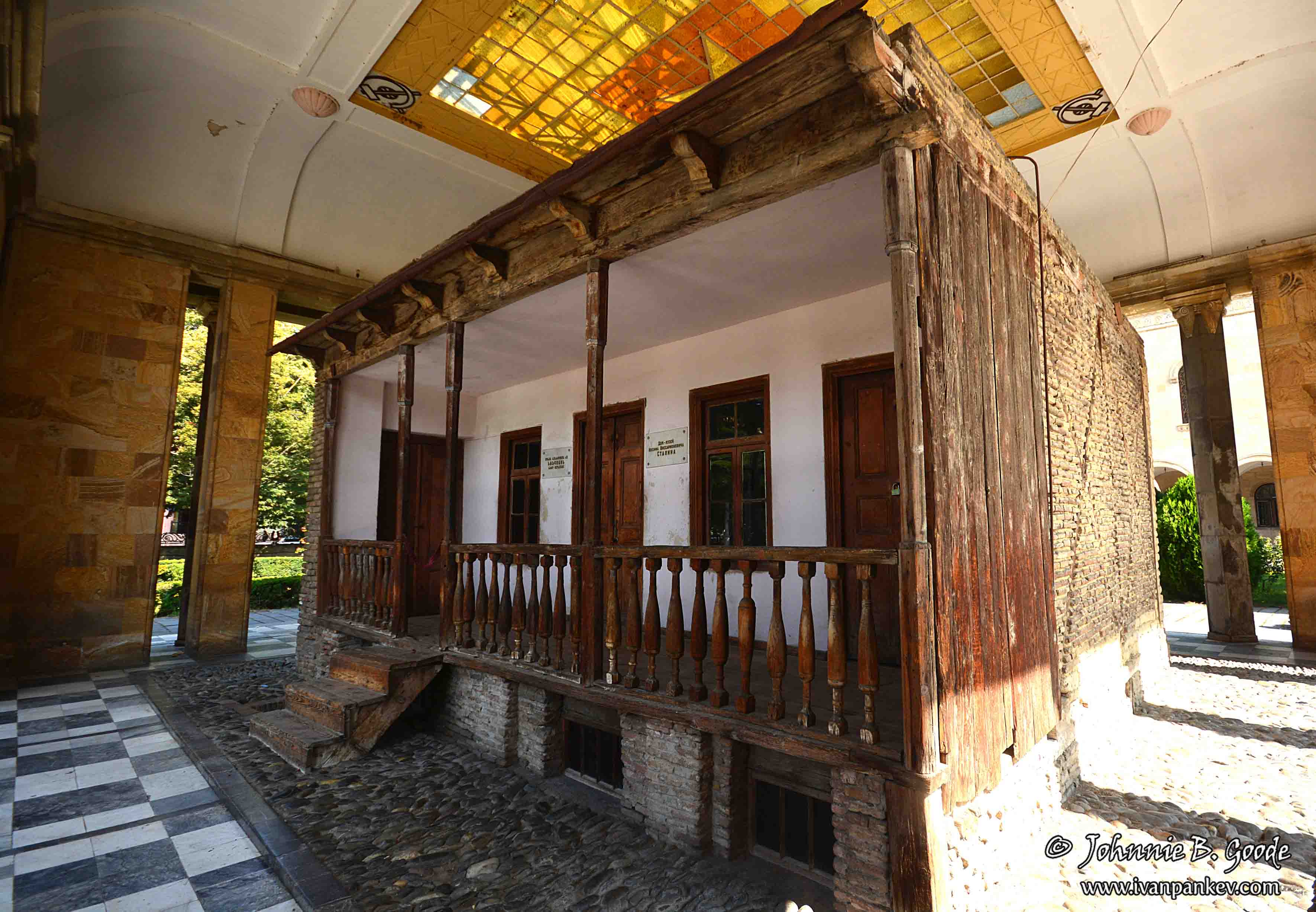 My first stop was Gori. This otherwise nondescript city had earned a worldwide fame for being Stalin’s birthplace. Under a large shed at its center there was the small wooden house where the “Russian Hitler” was born and lived until age 4. The massive two-storey museum nearby was full of his artifacts and memorabilia. Even his personal railway carriage was here. This was the most expensive museum in Georgia (10 Lari). I did not visit it, I didn’t believe I would get an answer to the question why a monster popped up from here.

One of the problems I have to deal with as a long-time traveller is that I have seen so many man-made wonders – temples, castles, tombs, palaces, … – that I’ve got blase and spoiled. A recent example for this was the cave city of Uplistsikhe – an interesting place that could have been more if not compared to Cappadocia, Petra or even the other (and bigger) Georgian site Vardzia. Nature (especially mountains) continues to excite me though.

The archaeological site of Vani consisted of only a few foundations but as one of the main centers of Ancient Colchis the place was of a great historical significance and so full of legends that they were enough for my imagination to depict a lot more vivid picture. 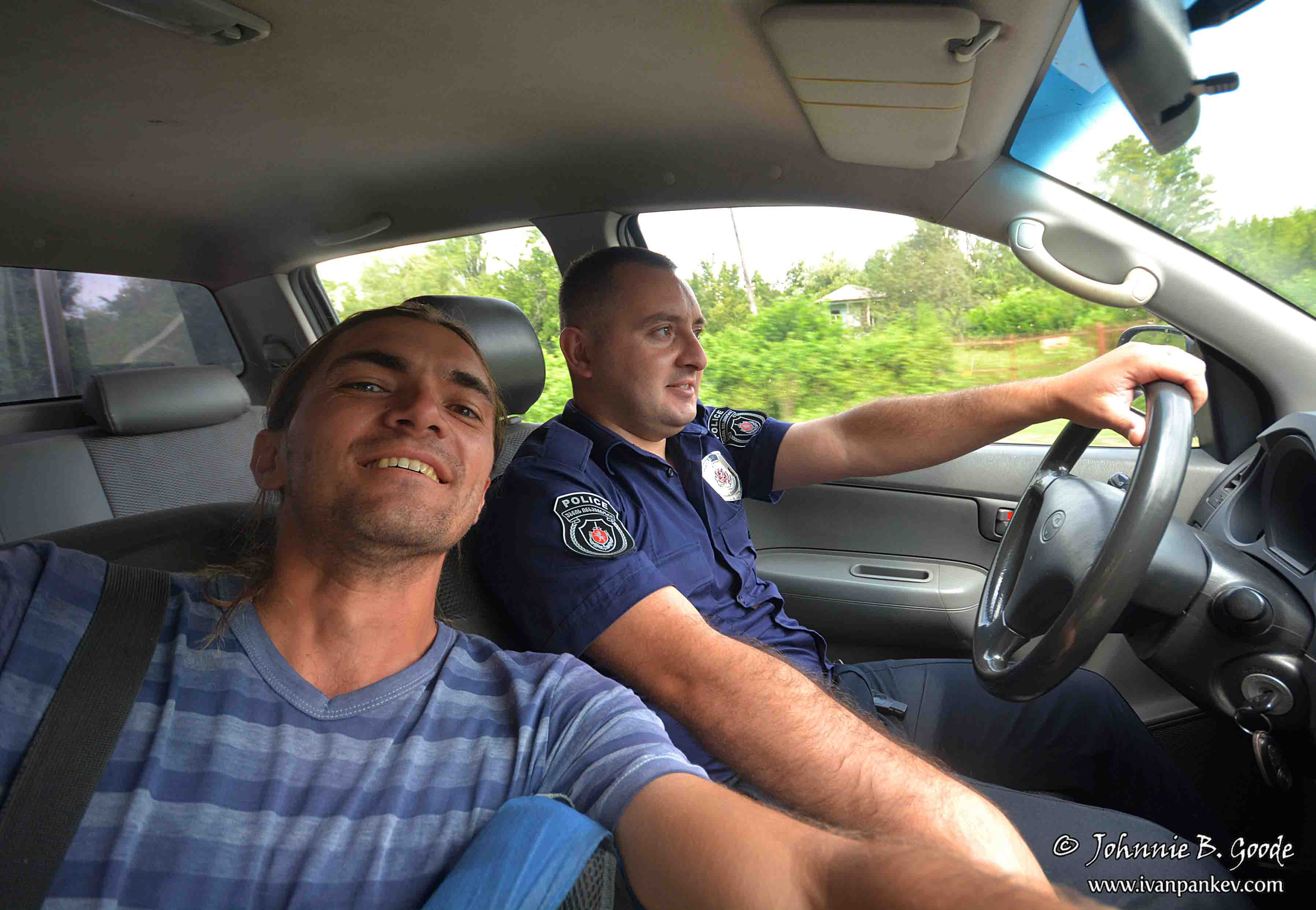 In the Martvili province I met the most complaisant police officers in the world. They would often stop and offer me a ride. Then they would drive to the end of their area and call a colleague to come and pick me up. The total number of different patrol cars that took me for a ride was 7. I even spent a night in the fenced park in front of a police station and they let me use their toilet. Swell guys! 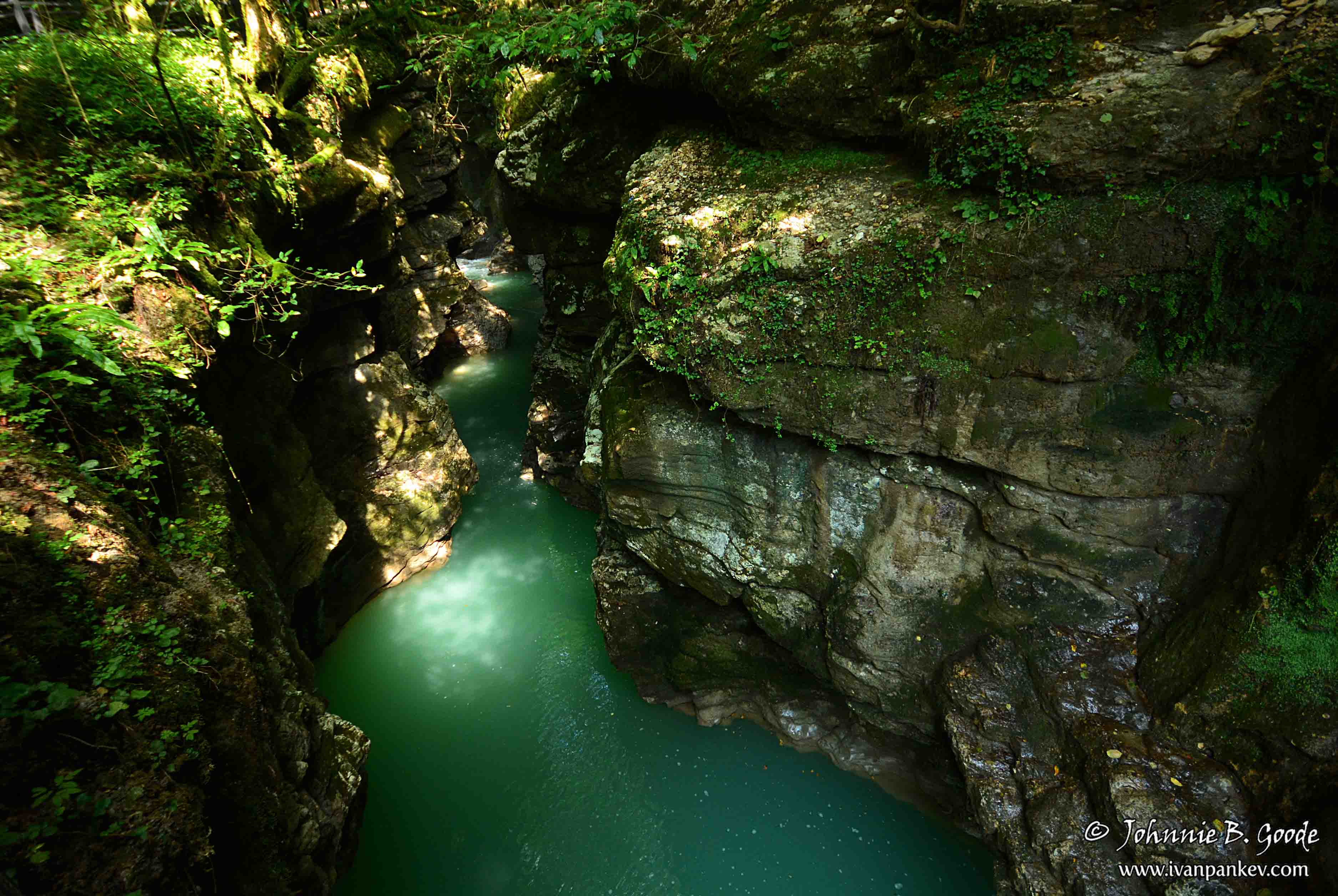 The Martvili Canyon seemed to me slightly overrated, all in all the eco-trail was no more than 500 m. long and had several observation platforms. However, it was a nice place. A narrow canyon incised 20-30 m. into the rocks through which a milky-green river ran. There were several small waterfalls, too. 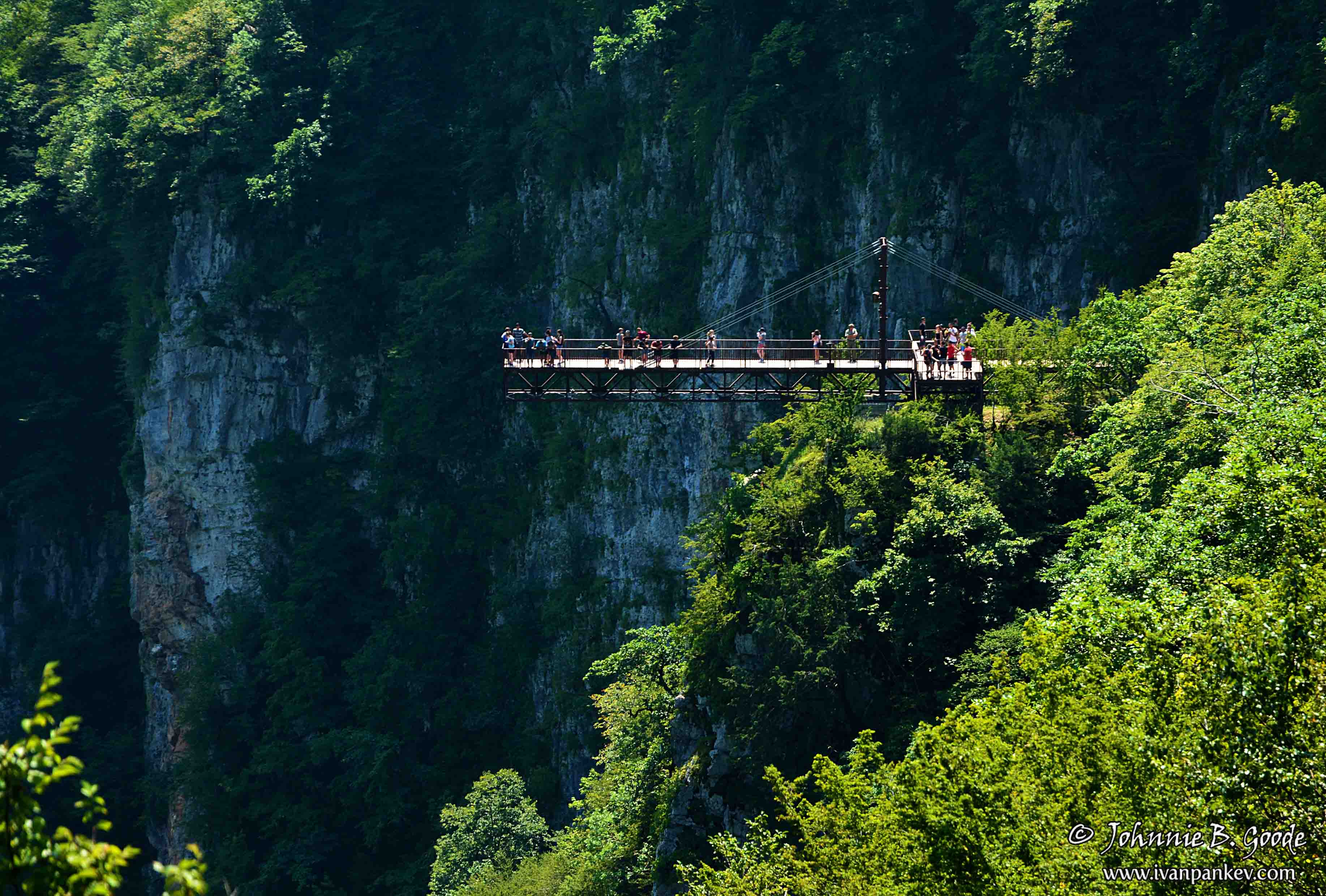 It took me a while to realize that the main attraction of Okatse was not the canyon itself but the metal trail that contoured its wall and in long stretches hung in the air supported by metal poles. It ended with a protruding in the air metal platform. Otherwise, the canyon was fairly deep, but not particularly beautiful. Its walls were overgrown with lush vegetation and along its bottom a river trickled.

According to the man who drove me there, Kinchha waterfall was the highest in the Caucasus Mountains. I wasn’t sure about this, but the place was definitely worth it – a high waterfall of two falls and a very pleasant terrace between them where I took a shower together with the numerous locals. 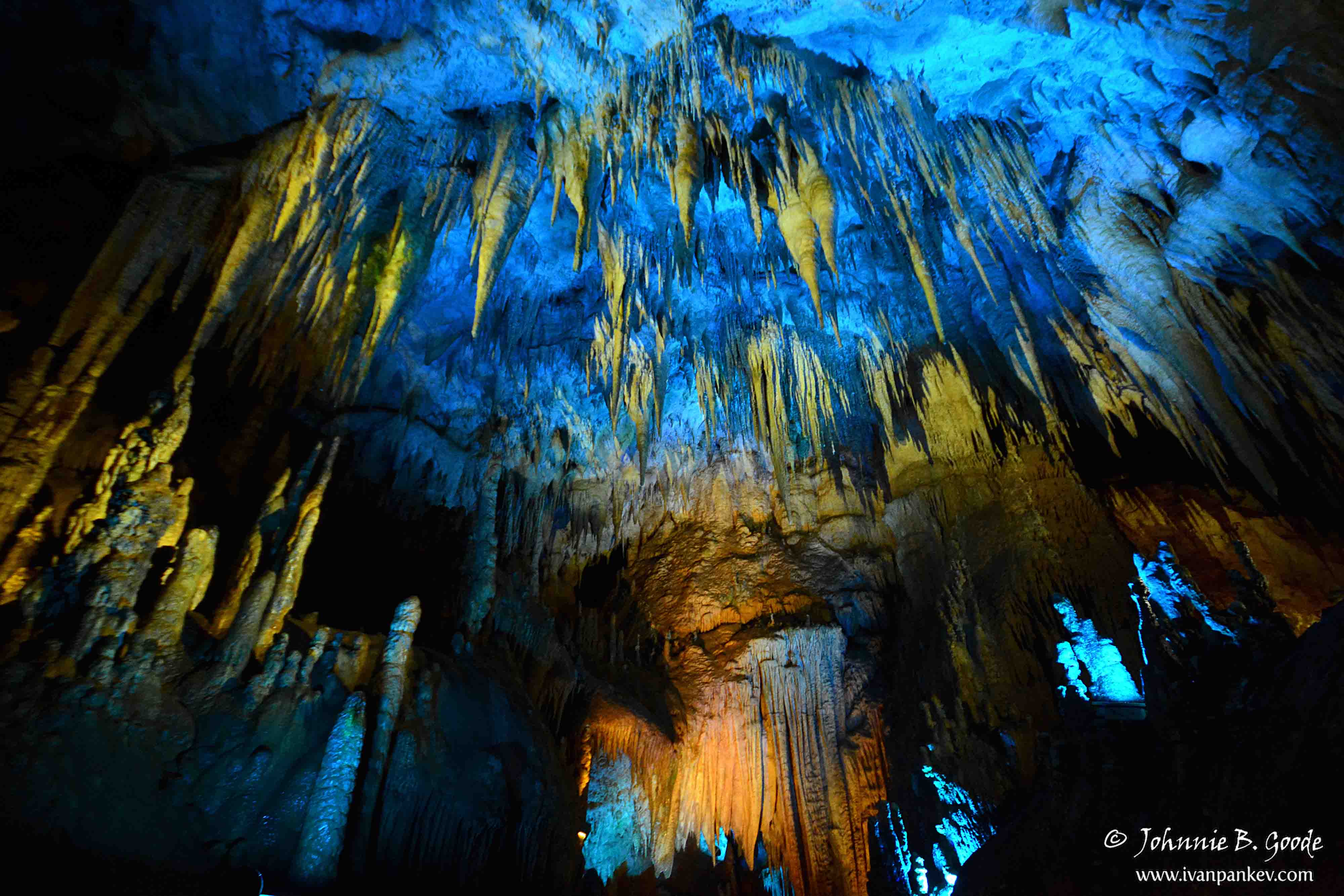 Prometheus Cave had many rock formations – stalactites, stalagmites, stalagnates, draperies, but what made this place really special was the lighting: soft light in bright colors – blue, red, purple, green, yellow. For an hour I made as many photos as normally for several days.

Sataplia Nature Reserve included a pavilion built to house and display dinosaur footprints. There were also dinosaur models with explanations throughout the park. The cave itself could not match the beauty of Prometheus’s and was a disappointment – relatively short, just a few formations and poor lighting. But outside there was a short nature trail through one of the few Colchis forests left. 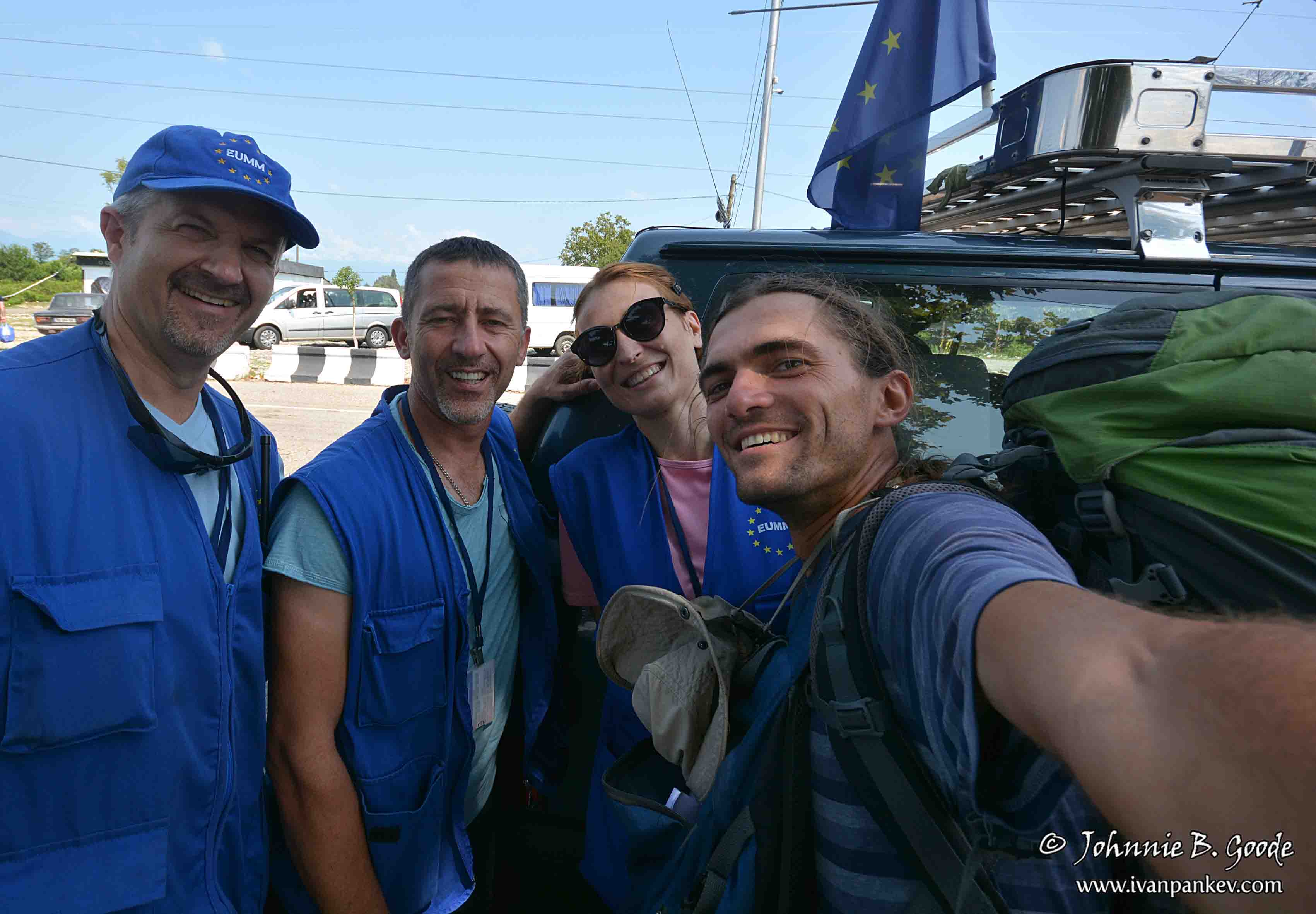 At the Georgian-Abkhazian border I met a EUMM team. One of them turned out to be a Bulgarian, even my namesake. They expressed skepticism about my trouble-free crossing into the autonomous republic, but it was not justified, my papers were in order. Subsequently some locals were also surprised that I crossed through Georgia. 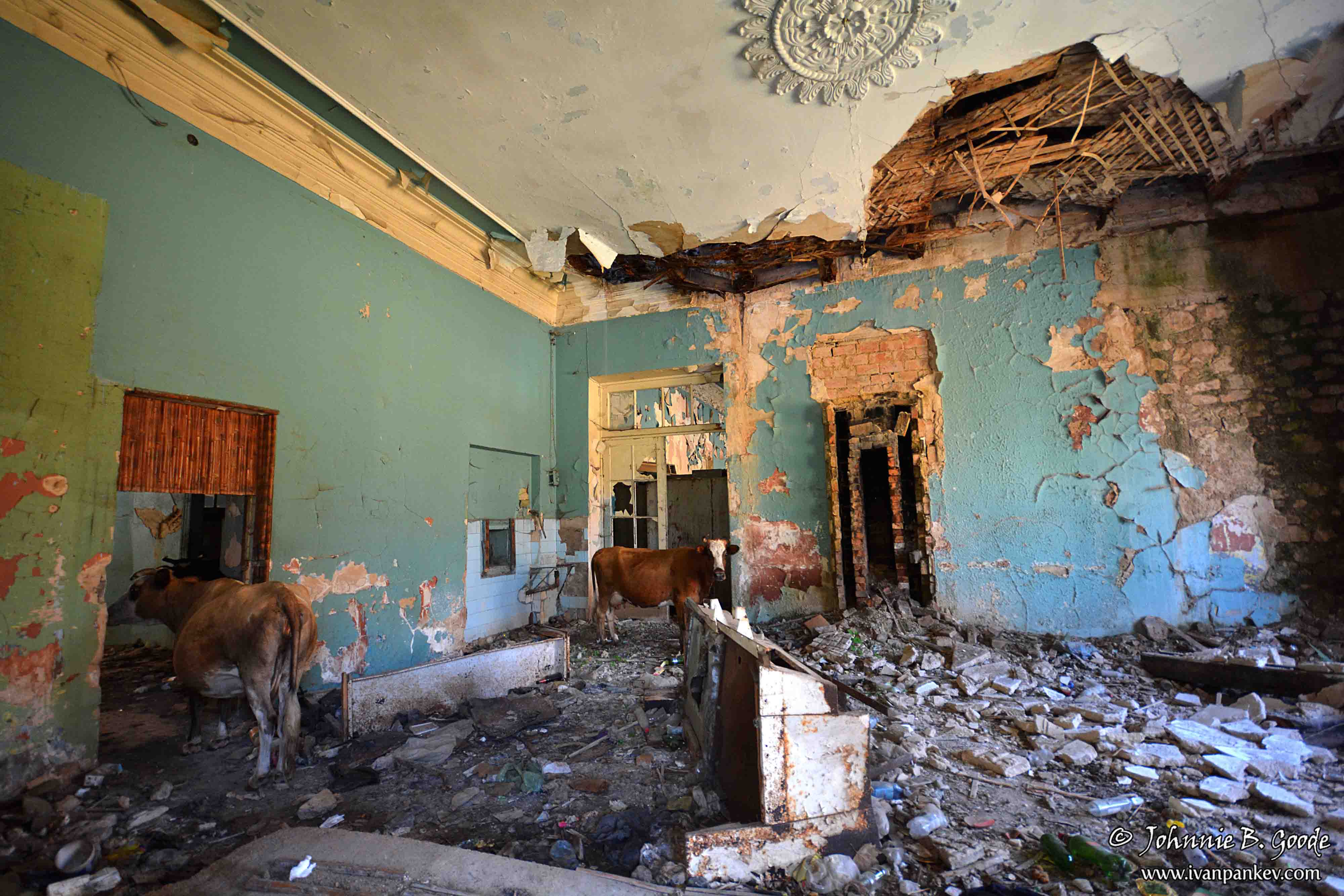 Right after I crossed into the Republic of Abkhazia I noticed the numerous desolate buildings. There was a logical explanation – hundreds of thousands of ethnic Georgians had been displaced. My first ride in the country was particularly stressful. The driver insisted that I pay, but I refused. He wanted me to give him my golden necklace or camera and said:

He went on like this for half an hour before he changed his tone:

I definitely wasn’t so desperate. 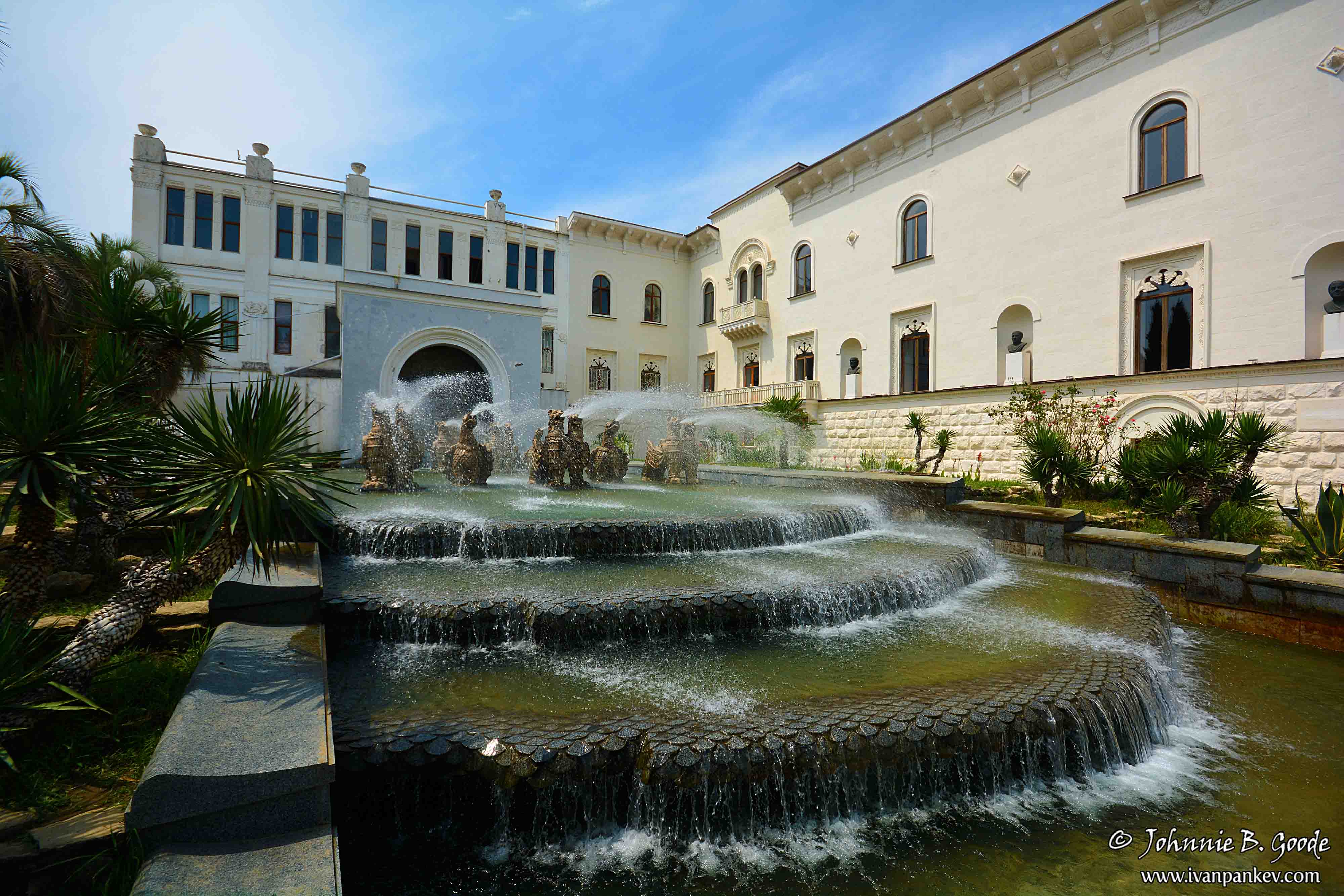 The capital city Sukhumi was in a state of neglect. The sidewalks were broken and buried in mud. There were clouds of dust in the air. Only the long pebbly beach and many parks saved the city from complete ugliness. In my opinion the Abkhazians had lost with their secession from Georgia which was confidently stalking towards the European Union, while Abkhazia could only hope to be annexed by Russia. Probably over 99% of all visitors to the country were Russians anyway, at least I did not hear another language.

Novy Afon was a much nicer town – there was a large seafront park and a pond with water-wheels, there was also a small waterfall and from the hilltop Anakopia Fortress one could see almost the whole of Abkhazia. 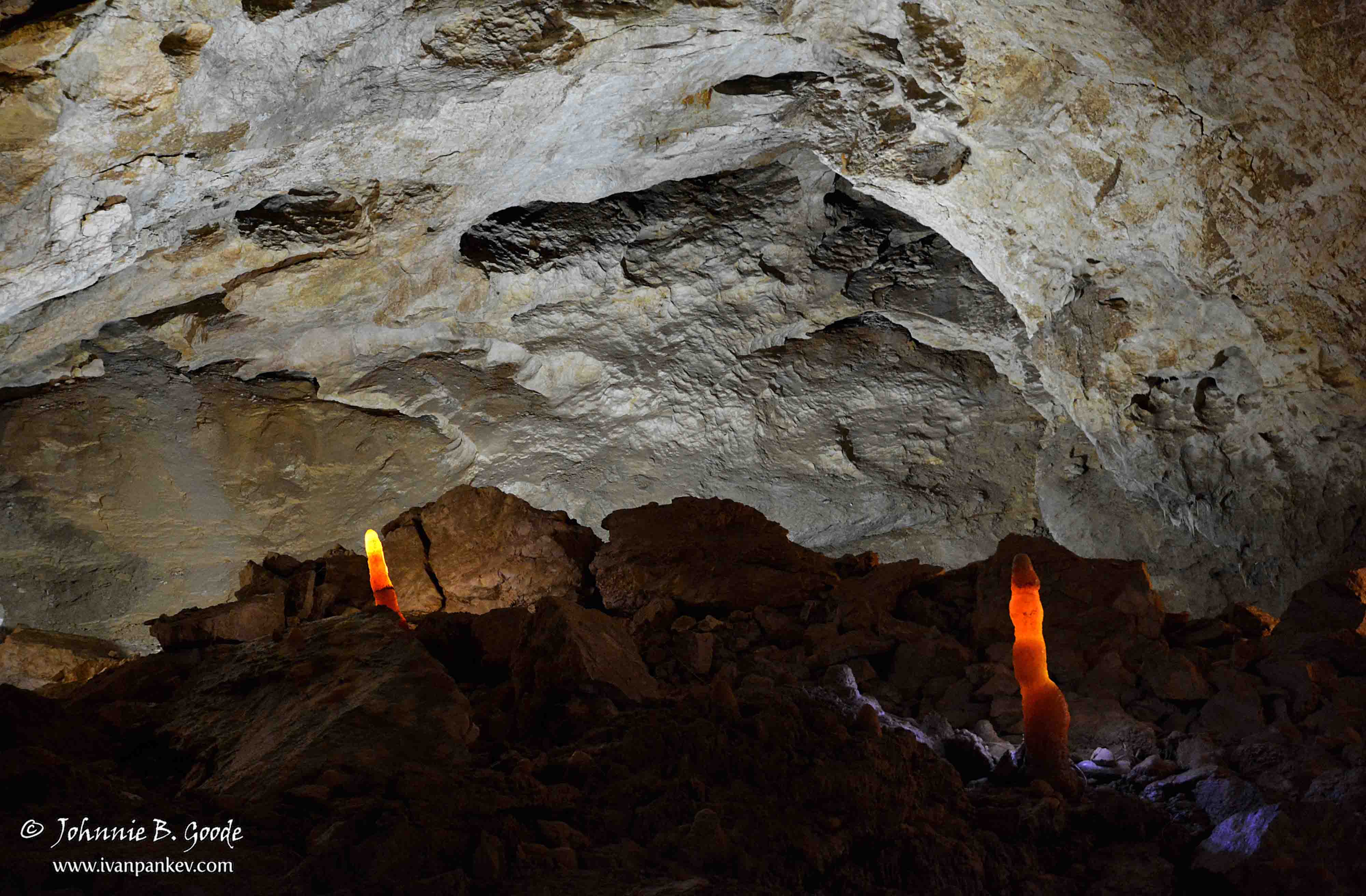 Novy Afon Cave was undoubtedly the greatest attraction in the country. The ticket-office welcomed me with a queue of more than 100 people. There were groups every 15 min., but at noon the tickets for the whole day were sold. The cave itself impressed me with its size, but it was relatively poor in rock formations. However, a few were particularly interesting and beautiful. I saw red stalagmites for the first time. They were lit so artistically that they beamed in the dark like bloody phalluses. And the so called “Waterfall” looked exactly like such – 20 m. long and 5-6 m. wide sparkling white stalactite.

The huge golden domes of Novy Afon Monastery gleamed like little suns. The main church was beautifully decorated inside and full of people. It was the day of the feast of the monastery. 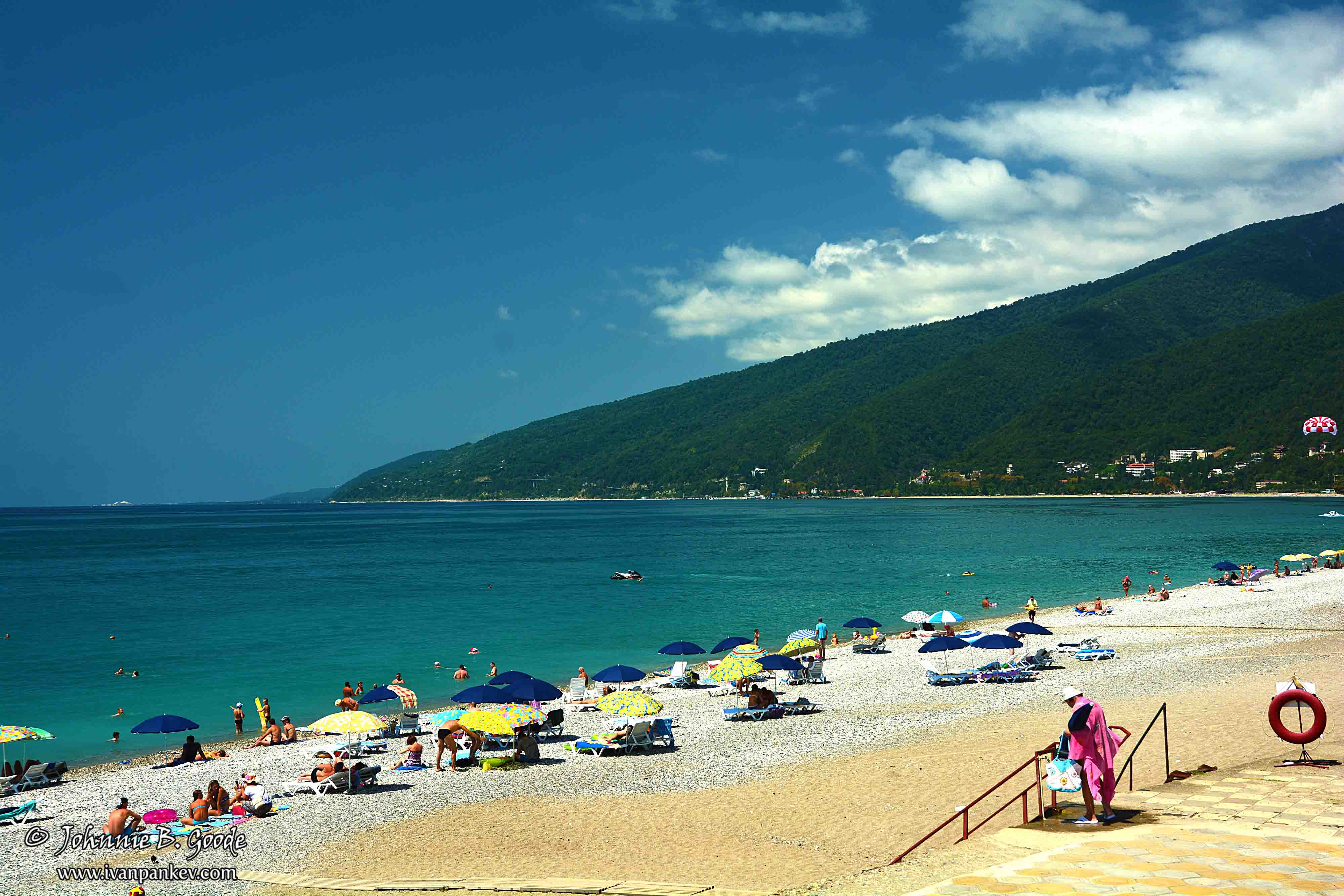 Gagra was known as the largest resort in the country, but it did not faze me with anything. There was a long pebbly beach on one side and overgrown hills with lush vegetation on the other, but otherwise it was a rural resort – something like our Kiten, but without the sand and the pop-folk music. It was OK, but it was not enough to keep me here.

This was the end of my stay in the Republic of Abkhazia. I had planned for a little longer sojourn, but it turned out that my visa had started on the date that I requested it, not the day I entered the country. A quick hitch to the border followed, then a visit to my namesake in Zugdini and via Tbilisi back to Armenia. I already had a visa for Iran and was heading there.