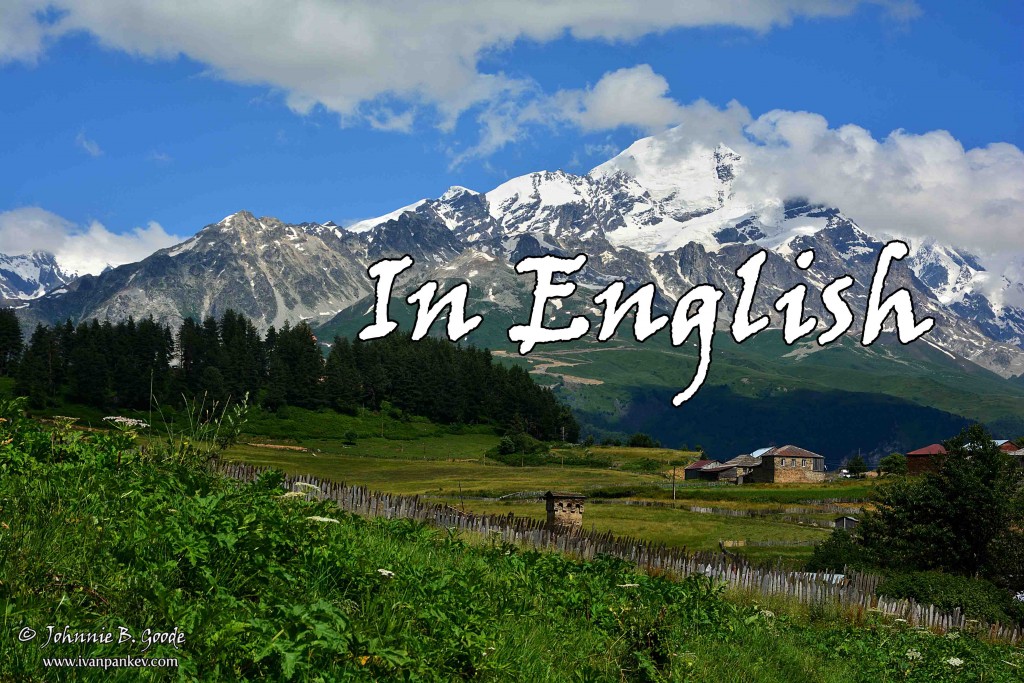 This is the story of my 5-month eastern journey through Turkey, Georgia, Abkhazia, Azerbaijan, Armenia, Nagorno Karabakh and Iran. This part is about the treks we did in Ushguli region.

We had climbed Mt. Kazbek (5047 m.) mostly because of luck and stubbornness. Krum and Lyubo flew back to Bulgaria and Tatyana and I headed to Svaneti to do some hikes in the surrounding mountains. It would have been wiser to start with the treks for acclimatization and then lunge for the high peaks, but we were pressed by time. 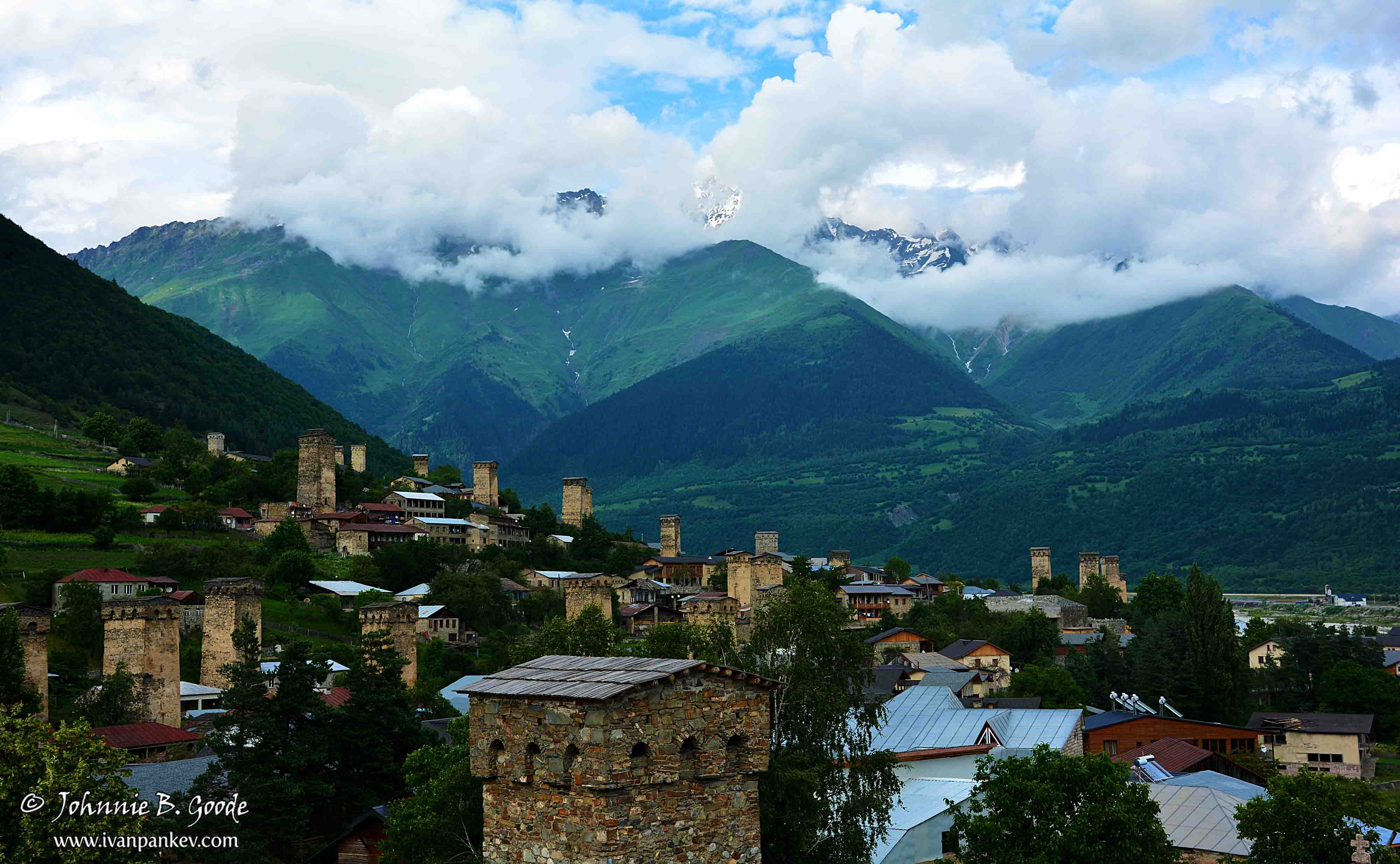 Mestia greeted us with its notorious defensive towers and views of the main Caucasus ridge. But that wasn’t enough to keep us in town for more than one night. Early next morning we started a 3-day trek to Ushguli. 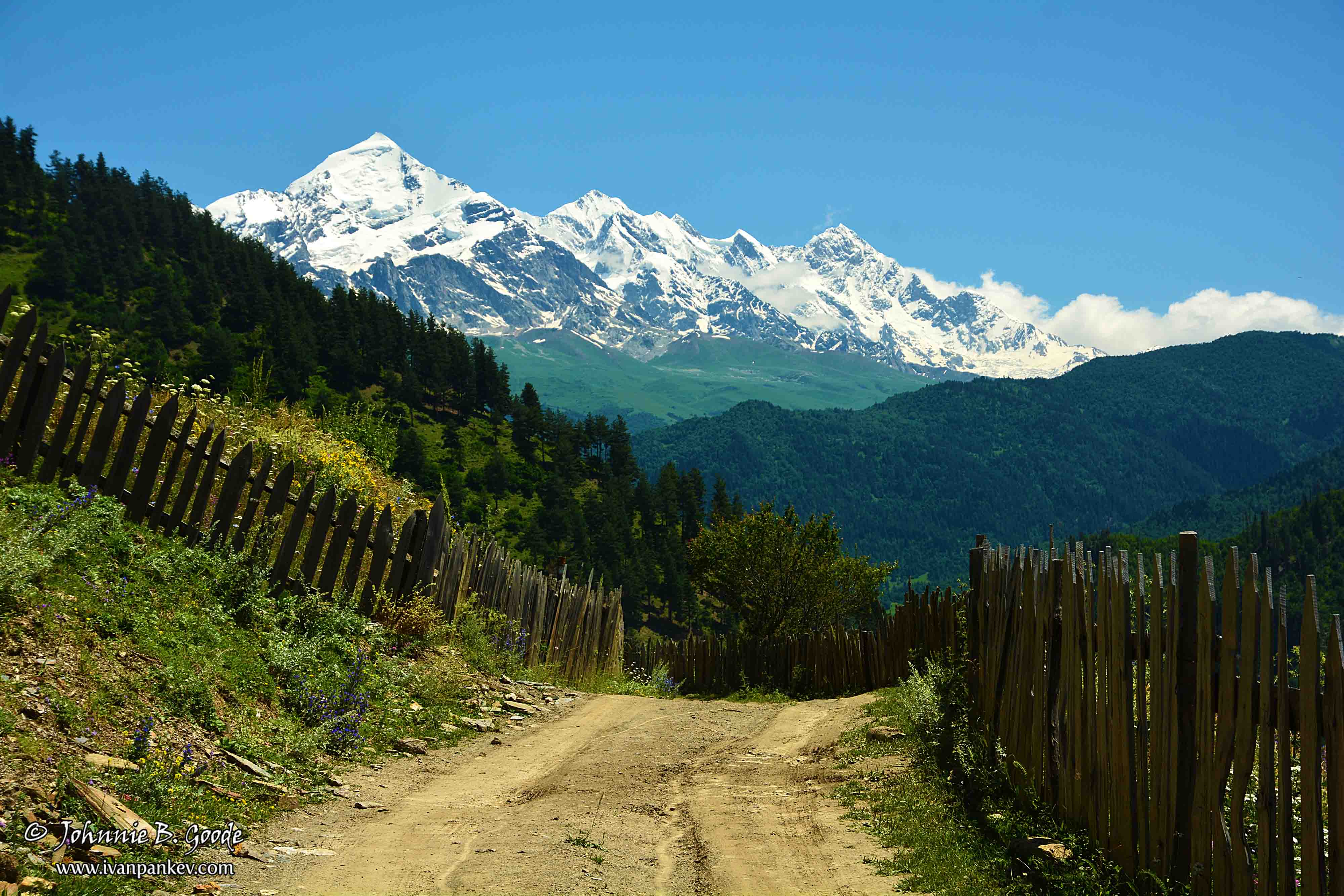 With such views in addition to a friendly population it wasn’t difficult to understand Georgia’s growing popularity among the European tourists. 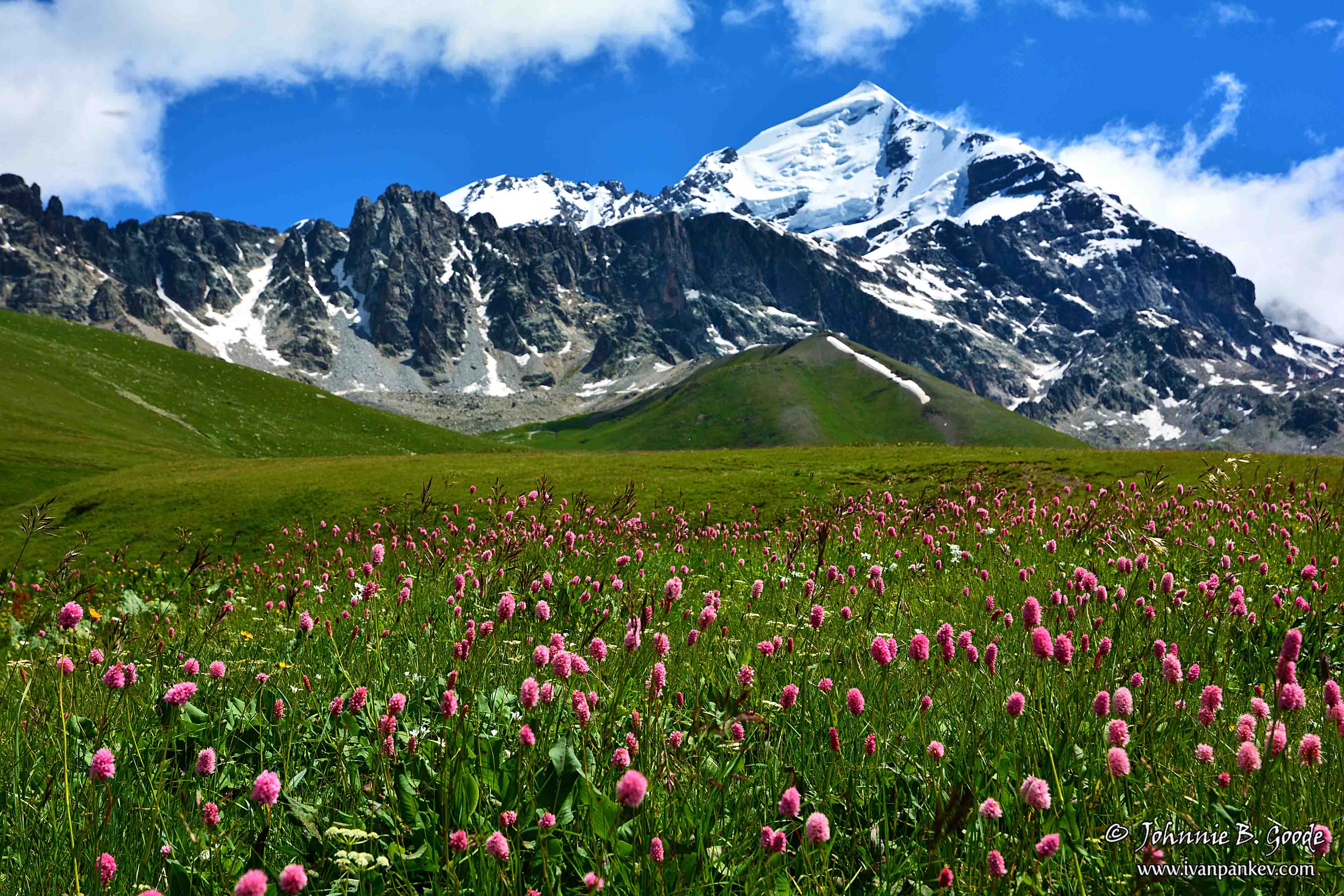 Although it was already the end of July, on the slopes of Mt. Tetnuldi spring was in full bloom. 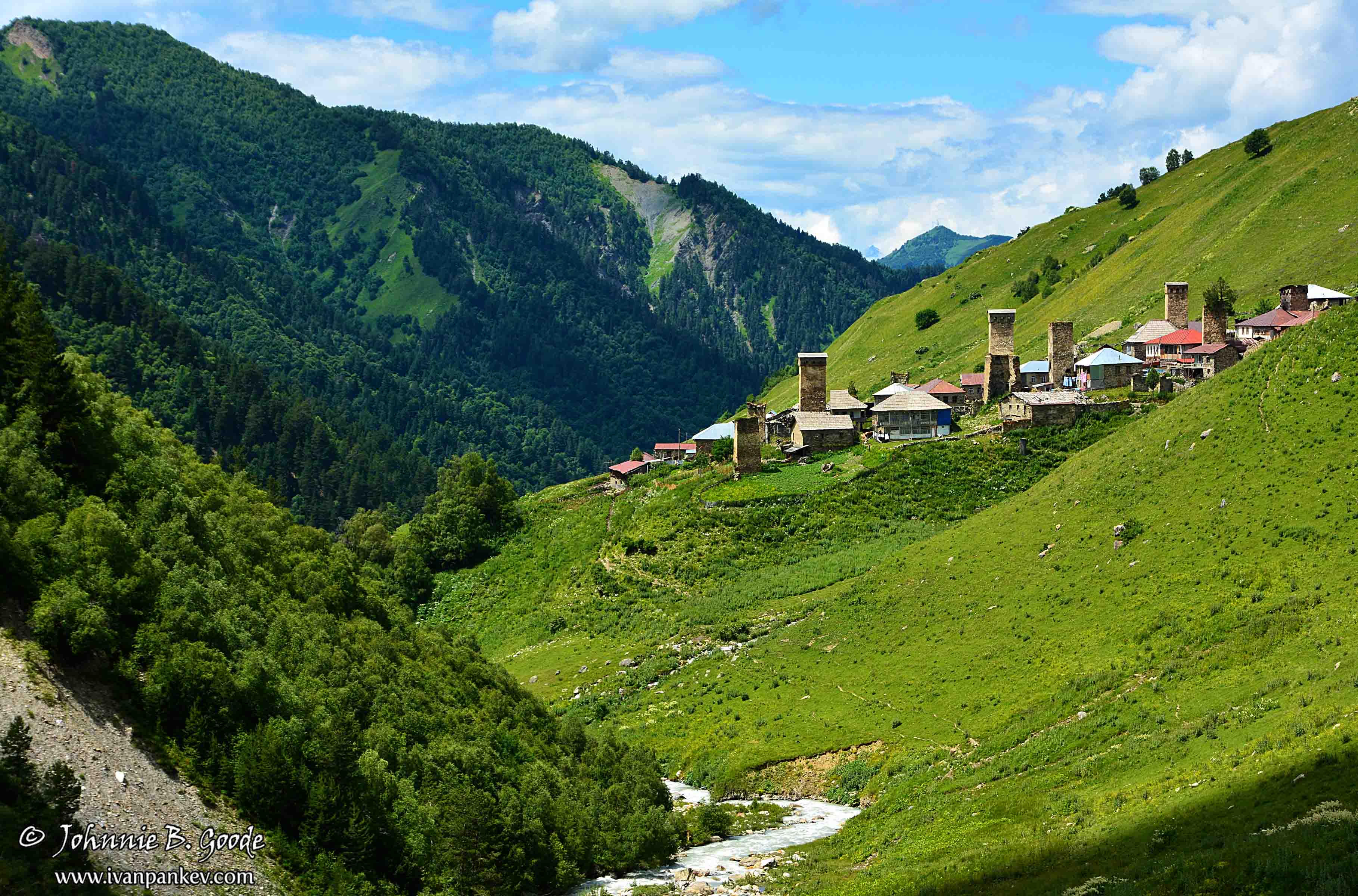 One of the charms of this trek was that it passed through several villages where time seemed to have stopped 100 years ago. Only here and there some men of enterprise had turned their stone homes into guesthouses for the tourists. 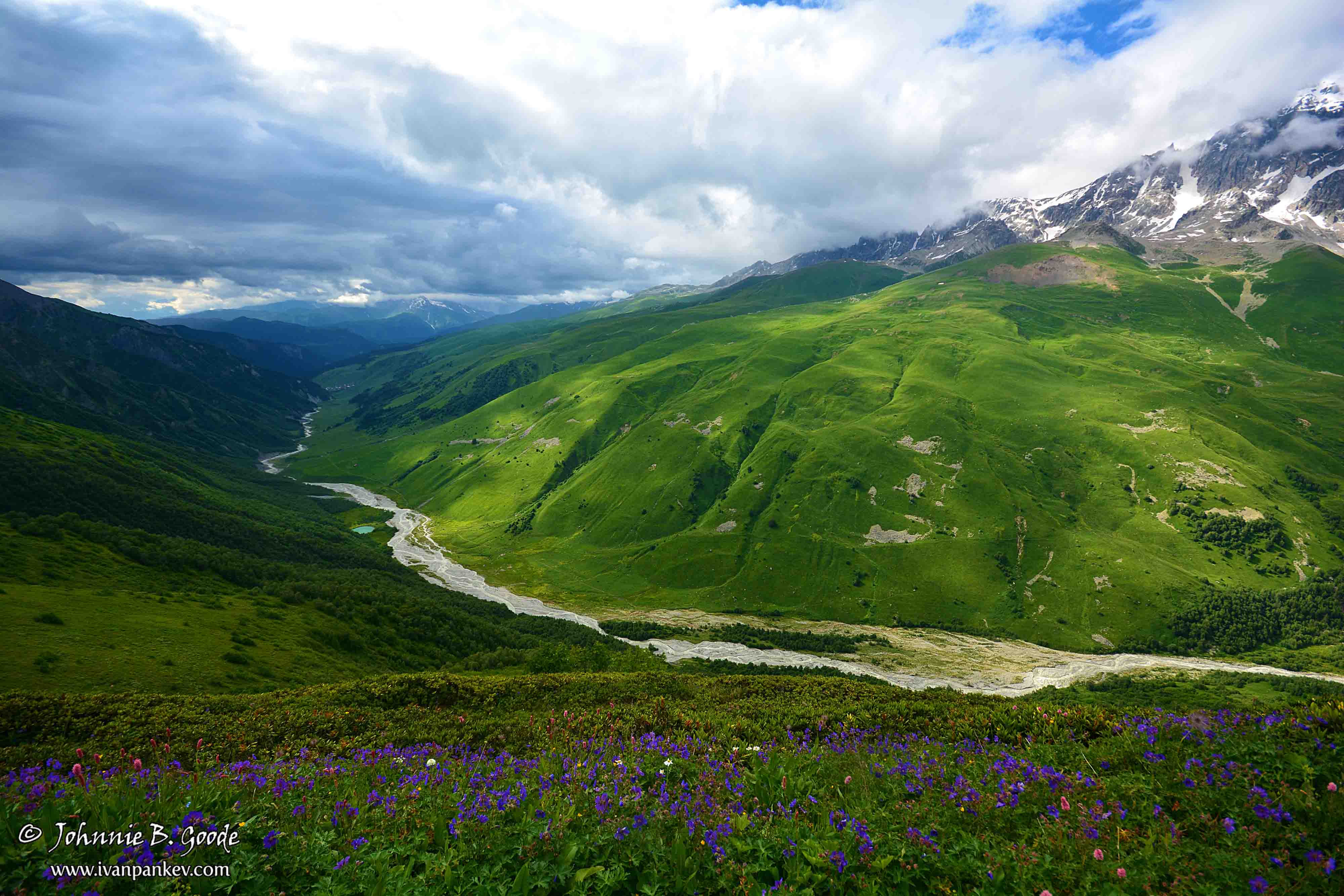 Crossing the river near Adishi proved to be the biggest challenge of the whole trek. The glacial current was not just terribly cold, but strong enough to knock over a grown man. Two boys from the village were using the opportunity to earn money. They transported with horses tourists from one side of the river to the other. No wonder there was no chance to build a bridge here any time soon. 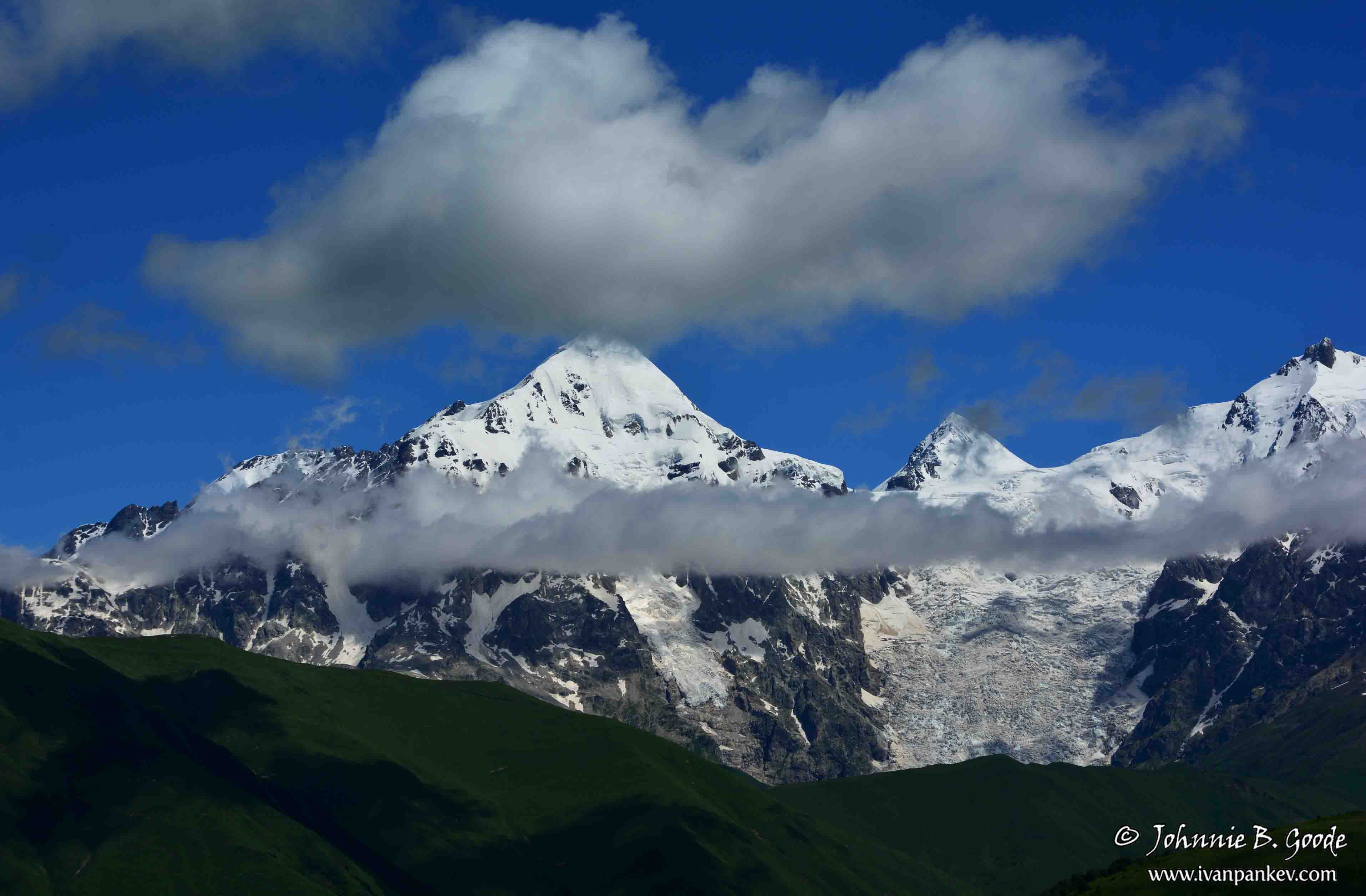 On the morning of the third day we reached Lalhori. There were only 9 km. more on a dirt road to Ushguli and they were serviced by buses, but we decided to complicate matters and continued along the path to the Latrapi pass. The views of the central Caucasus were a good reward for these new 1000 m. of ascent. 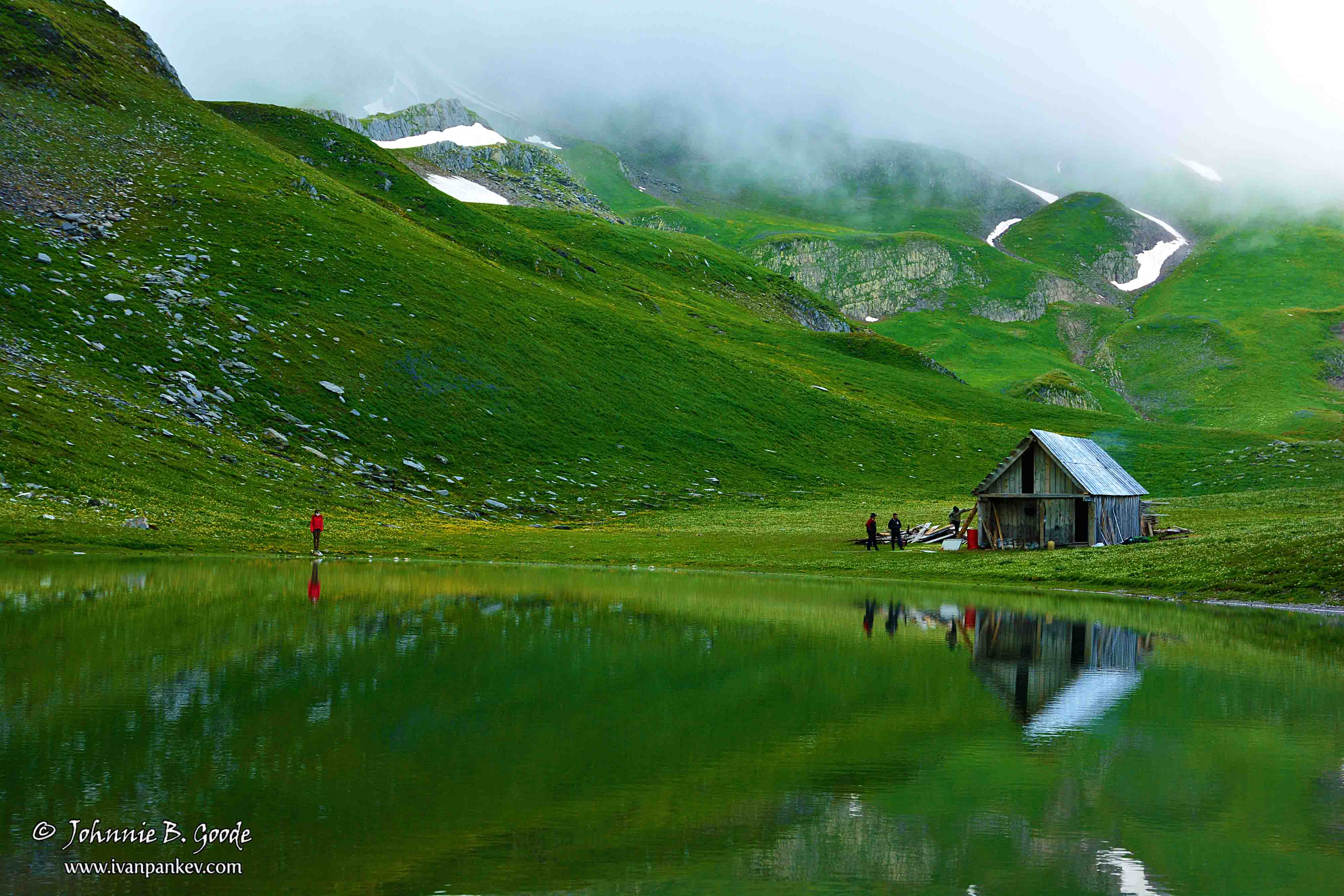 Just below the Latrapi pass (2830 m.) there was a nice lake where three workers were finishing the roof of a wooden shack. Murat informed us that it was going to be a hut/restaurant. It was clear that they had no architectural design, not to mention compliance with any standards. I wonder whether they had at least a building permit or it was a self-initiative. 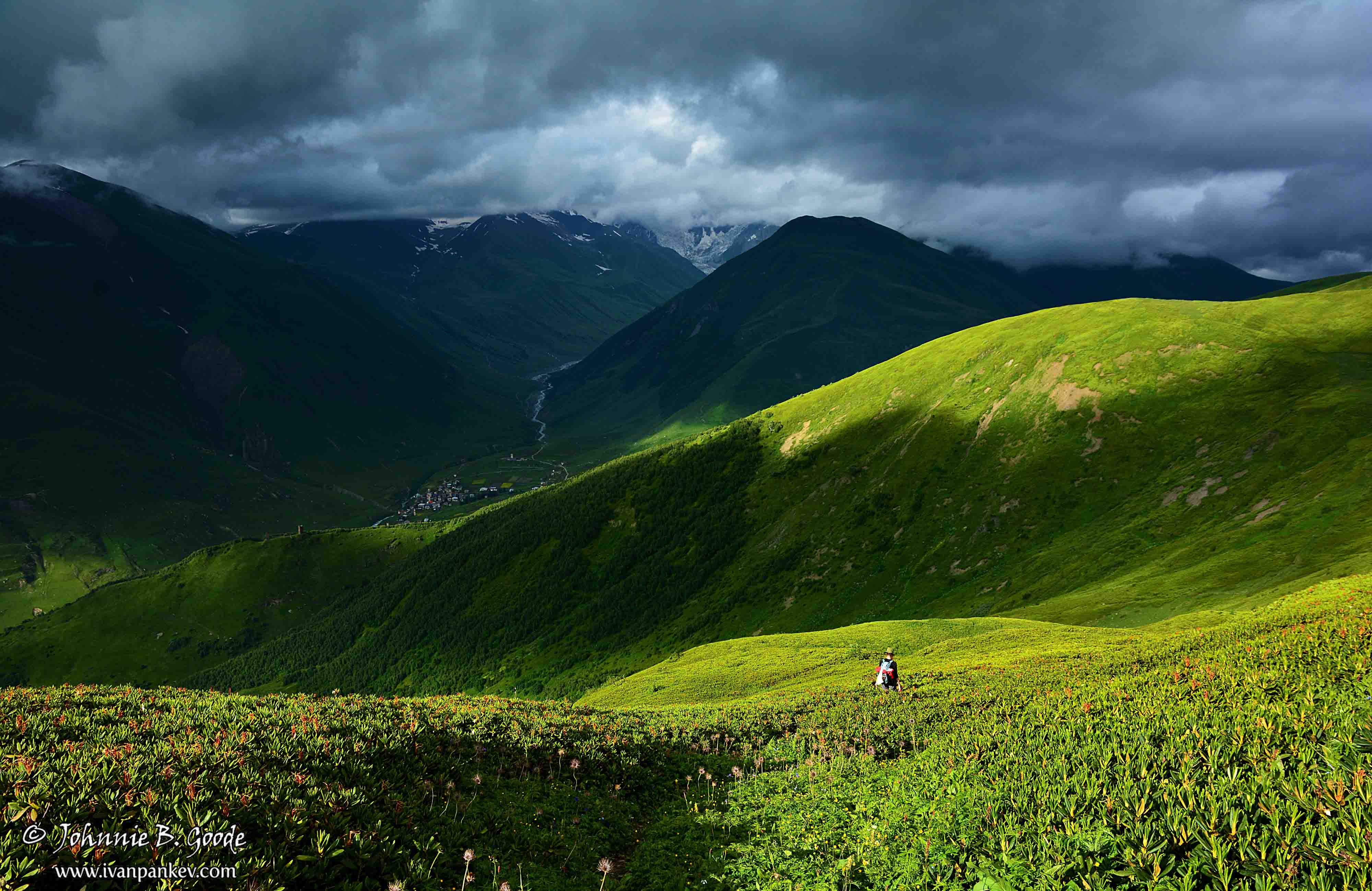 The final descent was steep and tedious, but the timing was perfect: soft sunset light, lush green hillsides and dramatic clouds – the photographers’ dream. 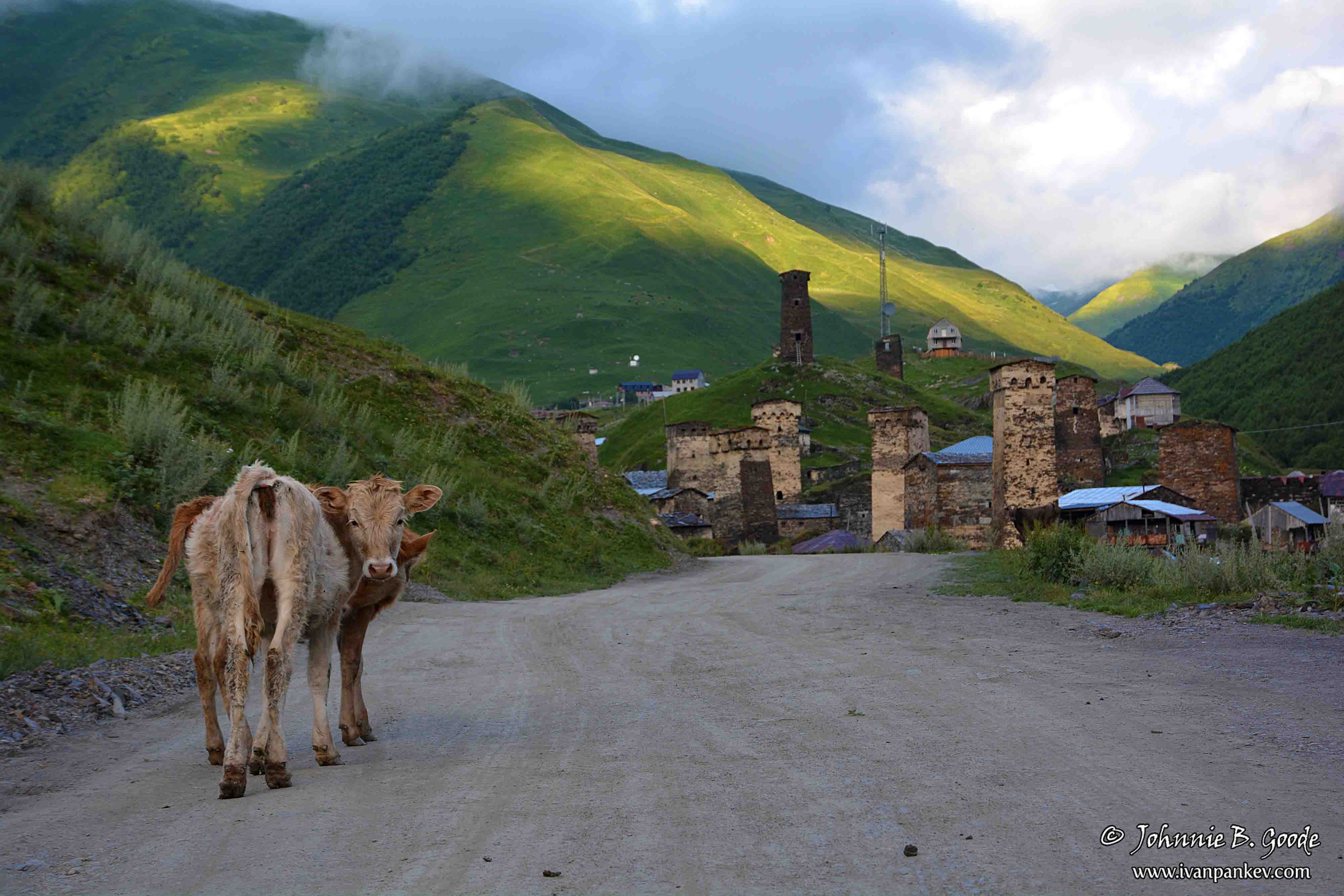 Reaching Ushguli, we finished this nice 80-kilometer trek with total ascent of 4100 m. Due to its numerous defensive towers and its preserved authentic architecture, the village was declared a UNESCO World Heritage Site. 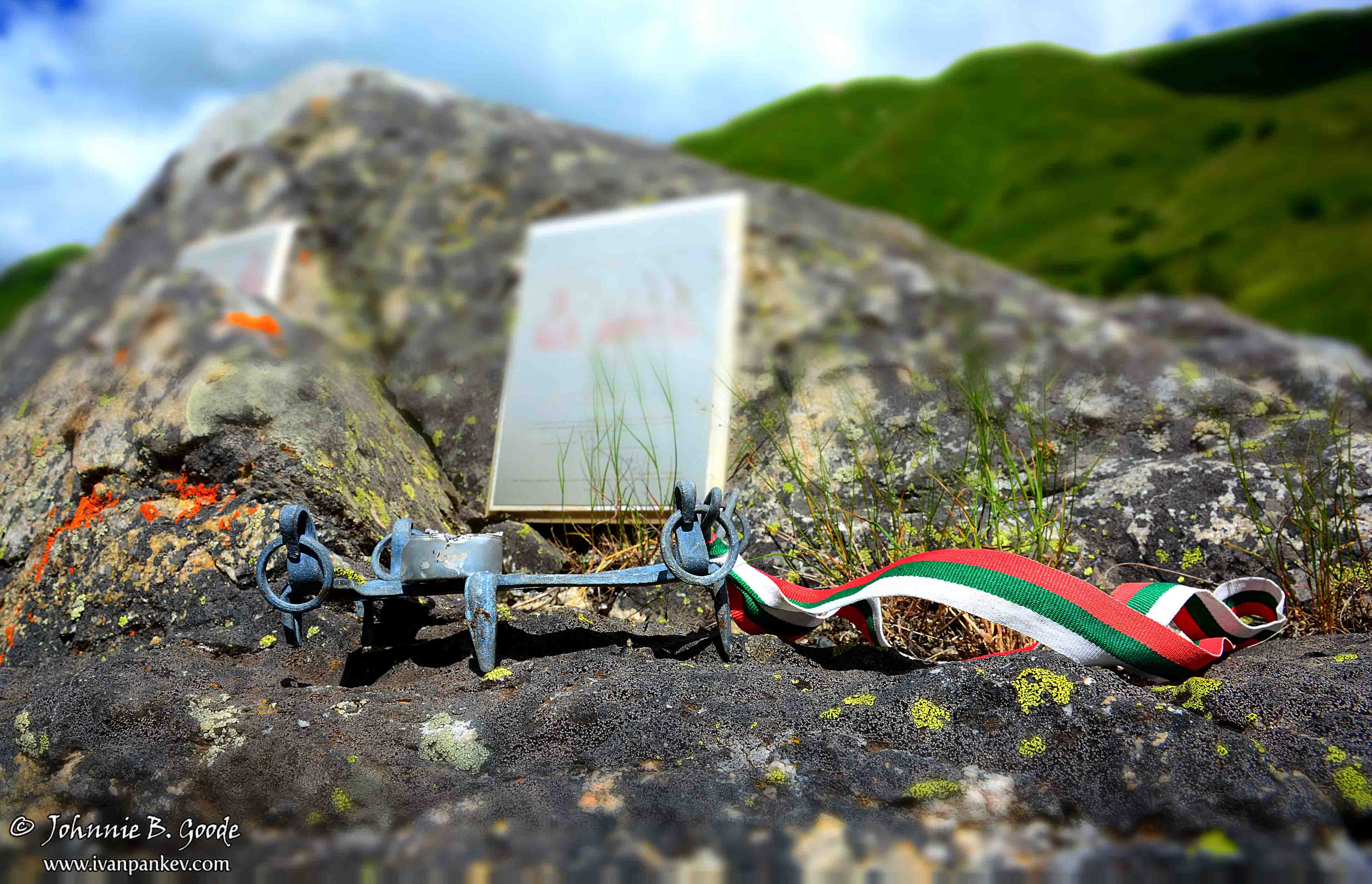 The Bulgarian trace in the region – a crampon and a memorial plaque were marking the tragic end of our first expedition that attempted a full traverse of the Bezingi Wall, known as the small Himalayas because of the terrible winds and fast-changing weather conditions. However, the first foreign team that had succeeded after 10 Soviet expeditions, was Bulgarian. 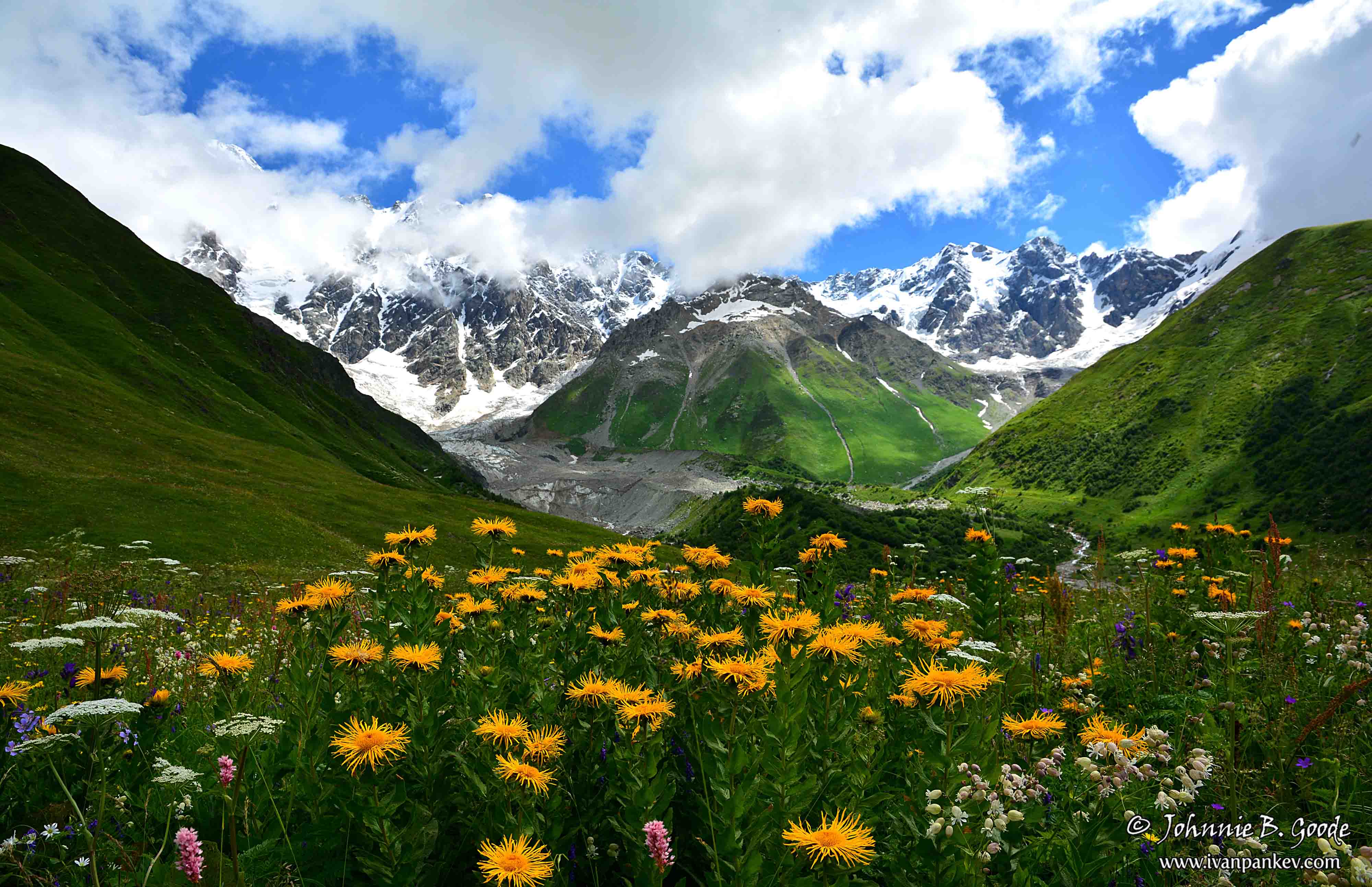 The 8 km. hike along a dirt road with almost no ascent to the bottom of the near-by valley was pleasant and definitely worth it. We climbed to a vantage point with a clear view of the Shkhara Glacier. Unfortunately the peak itself was hidden behind clouds. So we could not catch a glimpse of Georgia’s highest mountain. We headed back slightly disappointed, looking often back over our shoulders. 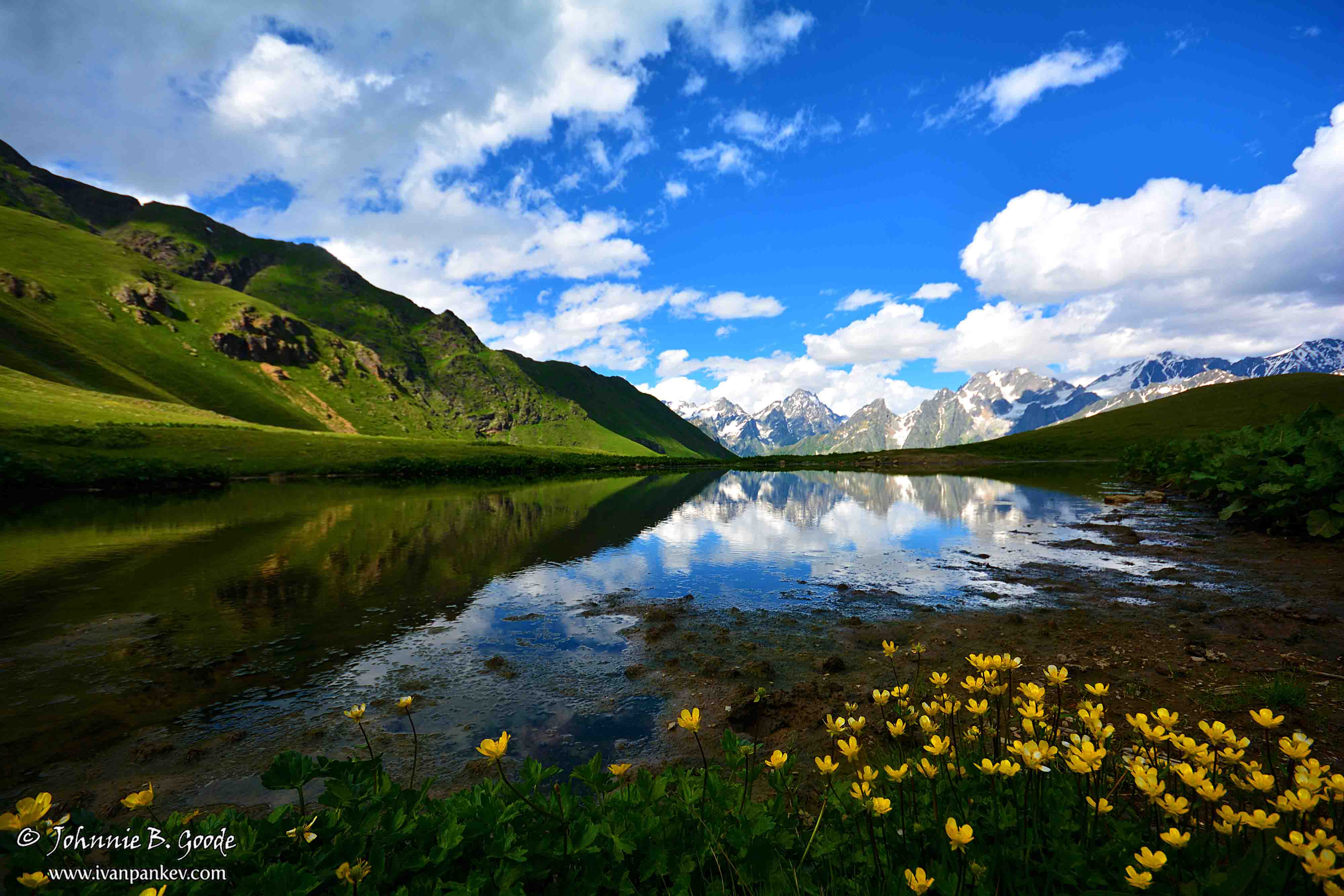 We went back to Mestia and did a demanding day trek to the Koruldi Lakes. They themselves were shallow muddy pools, but the reflections were magnificent. 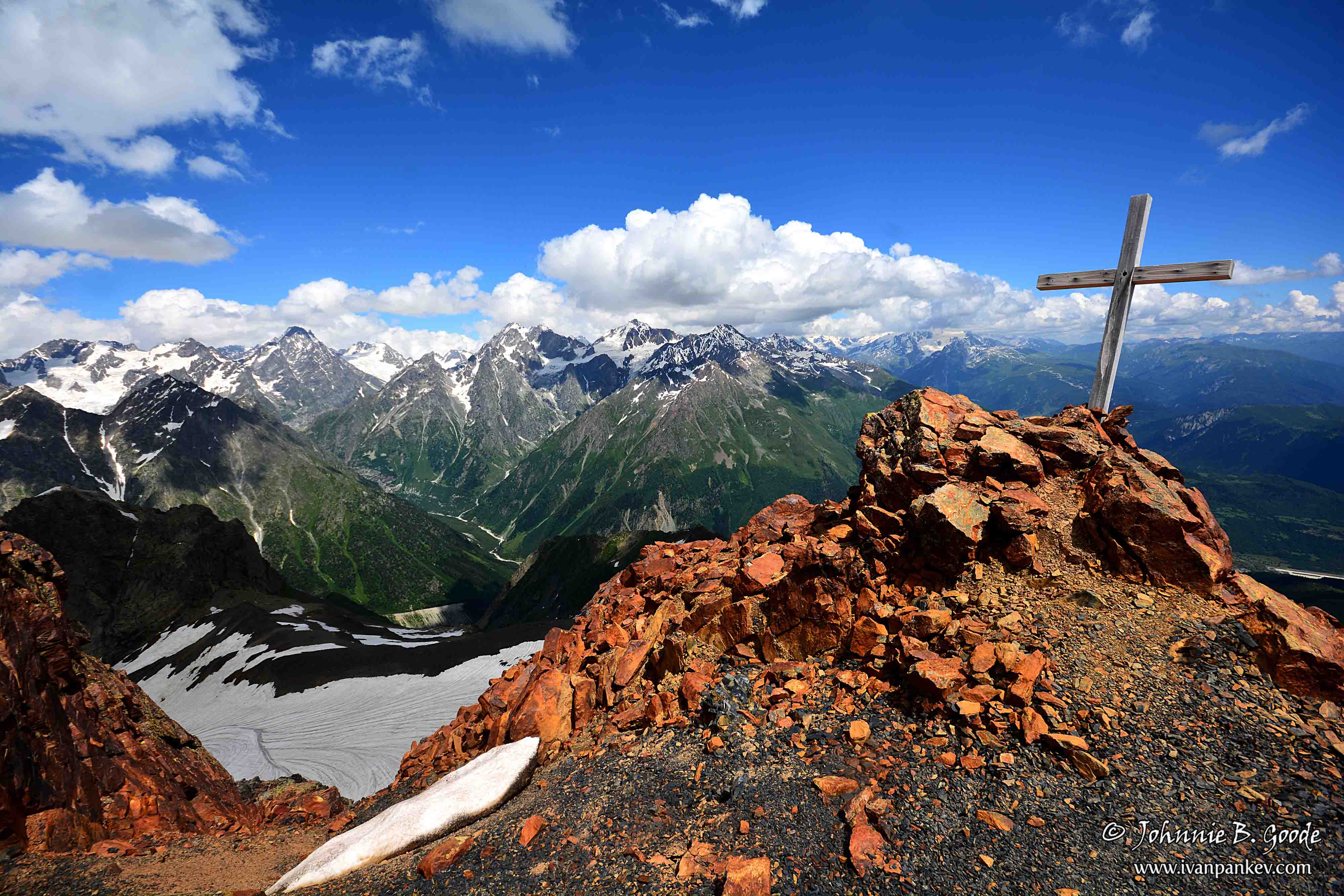 We tried to climb the peak towering above the lakes, but 150 m. below it the path just disappeared, leaving us against an almost vertical wall of friable outcrops. Judging by the stones of all sizes that had fallen on the snow, the rock falls were common. A descending man saved us from that awkward situation, showing us with signs where the approach was. Now the top was visible, and the path for reaching it – clear, but it was definitely not suitable for the faint of heart or acrophobiacs. Sometimes the edge was just as wide as my shoe. 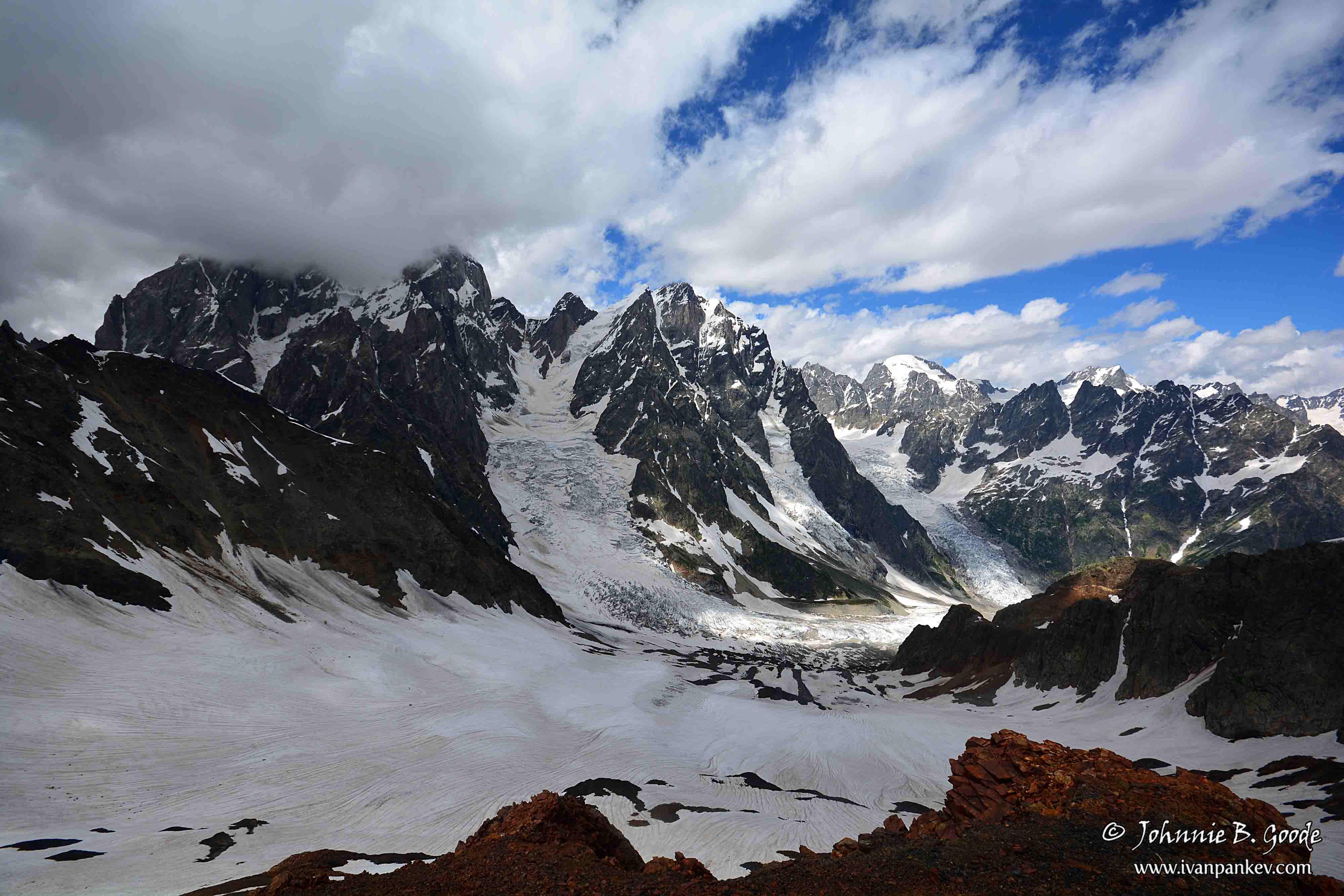 According to an internet post this place offered some of the best views an ordinary hiker could get in these parts of Caucasus. In my opinion it was true. Right in front of us was the slightly shrouded in clouds Mt. Ushba and its several glaciers. In addition there was a host of icy peaks along the main Caucasus ridge. In a clearer day one could see Mt. Shkhara, but it kept its mystique now. 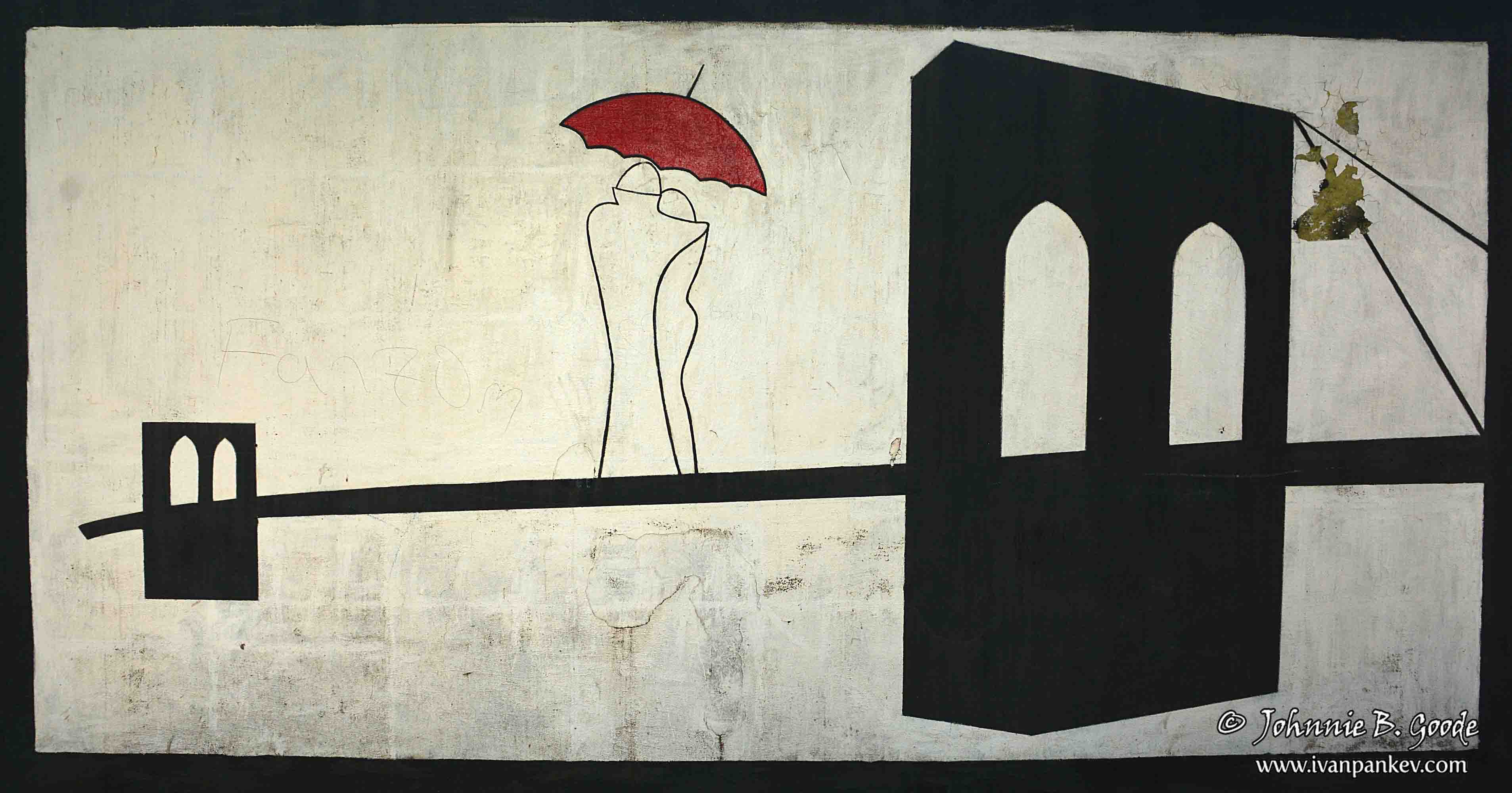 The end of Tatyana’s holiday was approaching, so we went to Batumi, where we spent a relaxing day exploring the city and sitting on the pebbly beach. Early next morning I accompanied her to the Turkish border and boarded her on the bus to Istanbul. 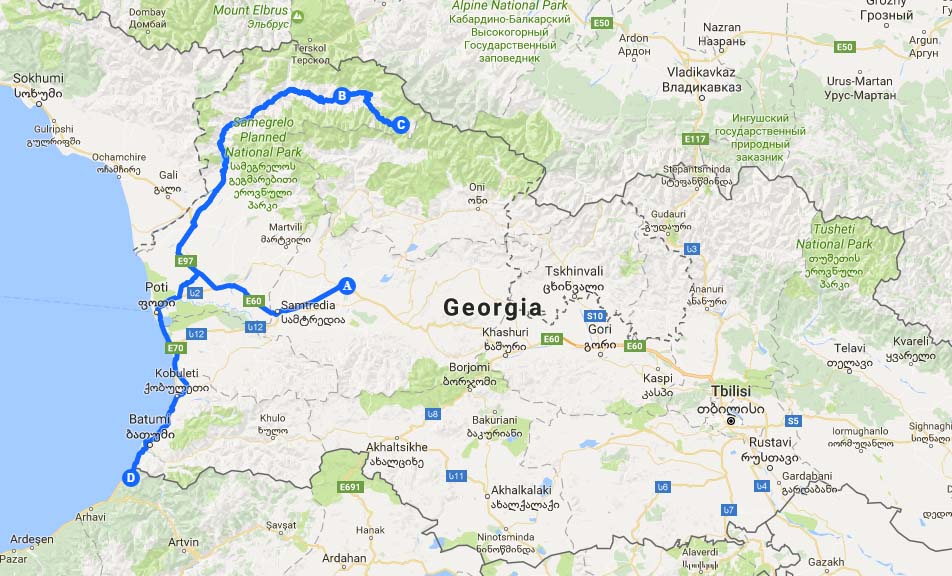 After two weeks of “vacation” – travelling with my girlfriend – I was again alone on the Road. At least I had got a permit to visit “the most touristy place on earth” – the Republic of Abkhazia.