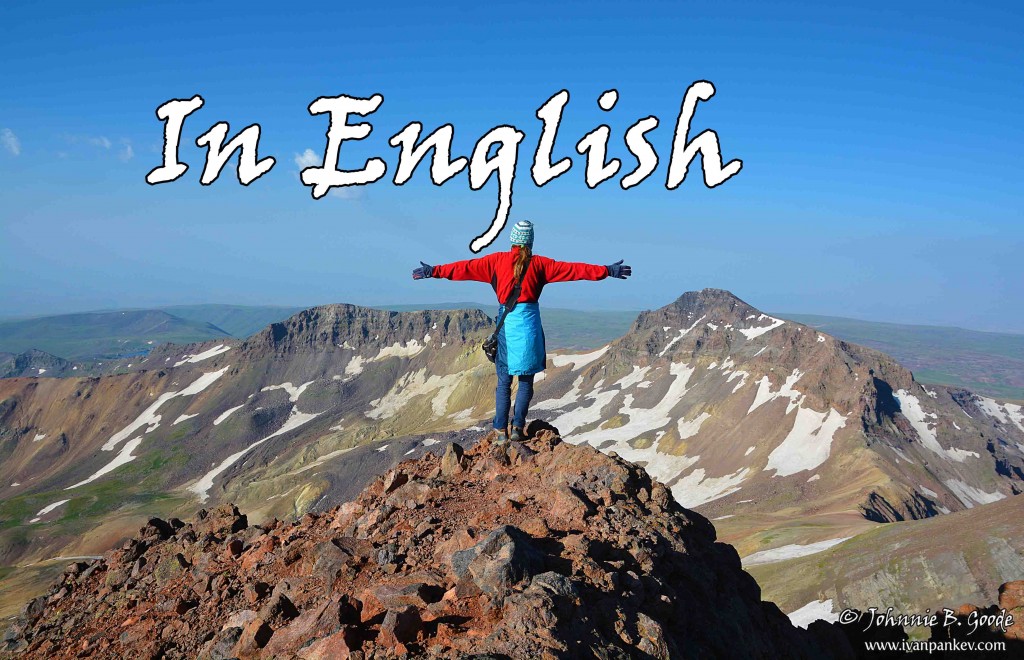 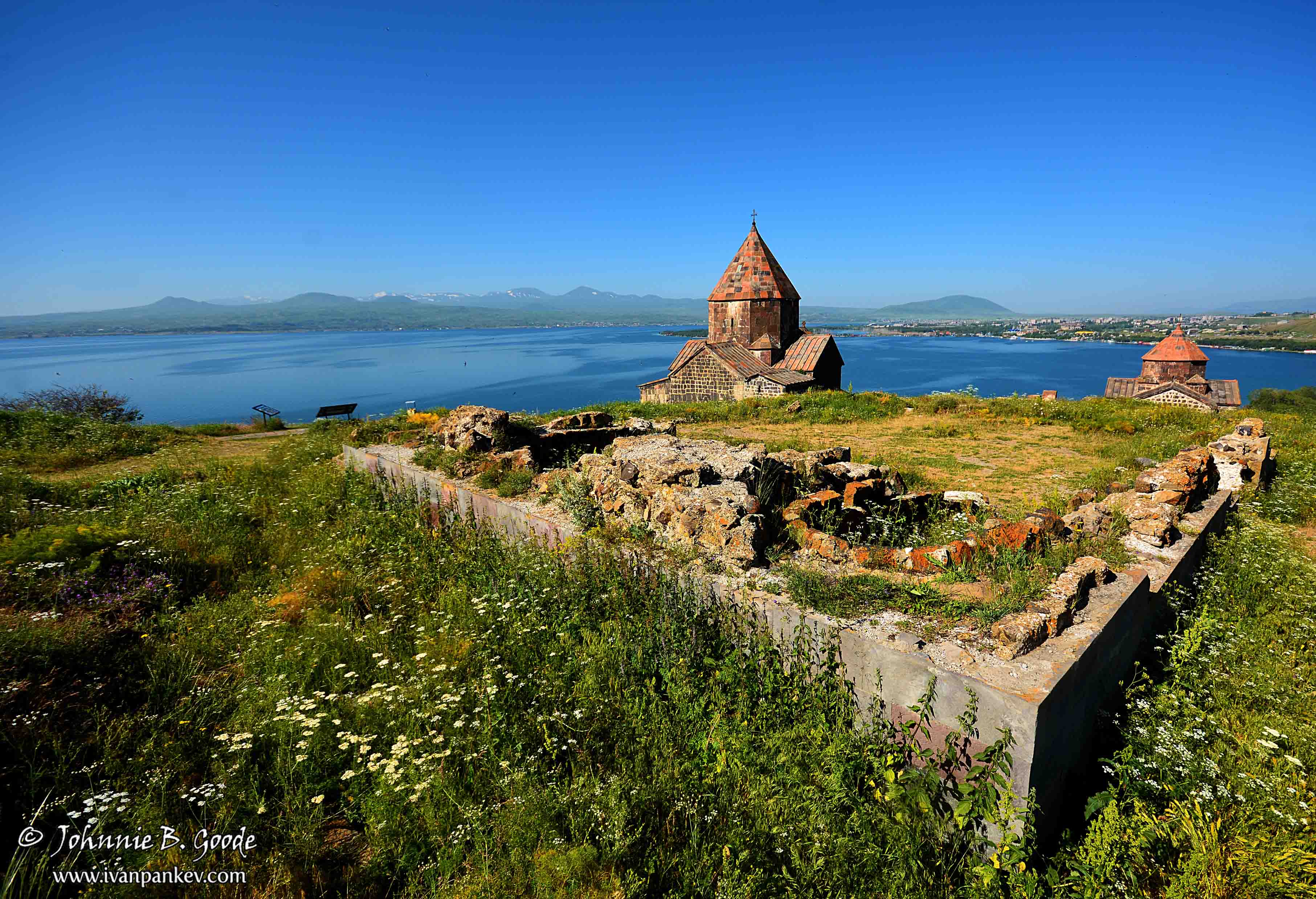 On the way to Yerevan I visited the Sevanavank Monastery. It had a great location – on the tip of a peninsula jutted into Lake Sevan. Besides being very beautiful with its sapphire blue waters, it was the largest body of water in Armenia and the Caucasus area with ​​1,200 km². It was not surprising that the locals used it as a sea – for sunbathing, fishing and water sports.

The Noravank Monastery was situated in a narrow gorge and was built of yellow sandstone in a complete harmony with the color of the surrounding dry landscape. It was founded in 1205, but the Armenian name translated as the New Monastery. This once again denoted what an old Christian nation they were. I came here with Aharon and his 5 friends who took me for a ride in their minivan from Yeghegnadzor and later took me back in the city. They were still minors and I could not buy them beer, so I treated them to ice cream. 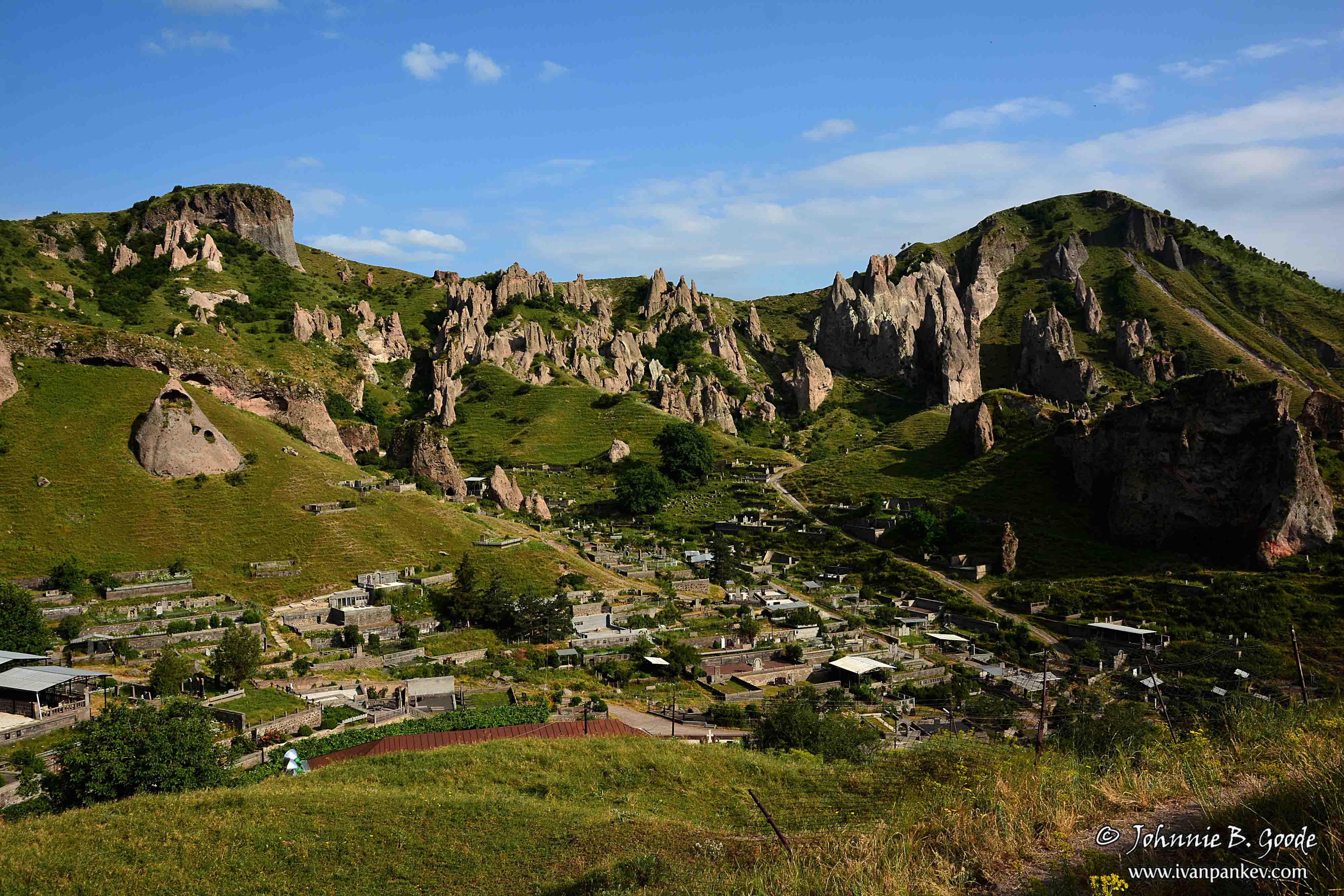 According to the guidebook Goris was the most beautiful rural town in the country. Its charm lied in the surrounding interesting natural formations resembling the chimneys of Cappadocia and the cave dwellings of Old Goris.

The Hellenistic temple in Garni was built in the 1st century and was dedicated to Helios, the Roman god of the sun. I wouldn’t be surprised to see such a building on the Mediterranean. Here it was somewhat out of place and did not fit the Armenian religious architecture. 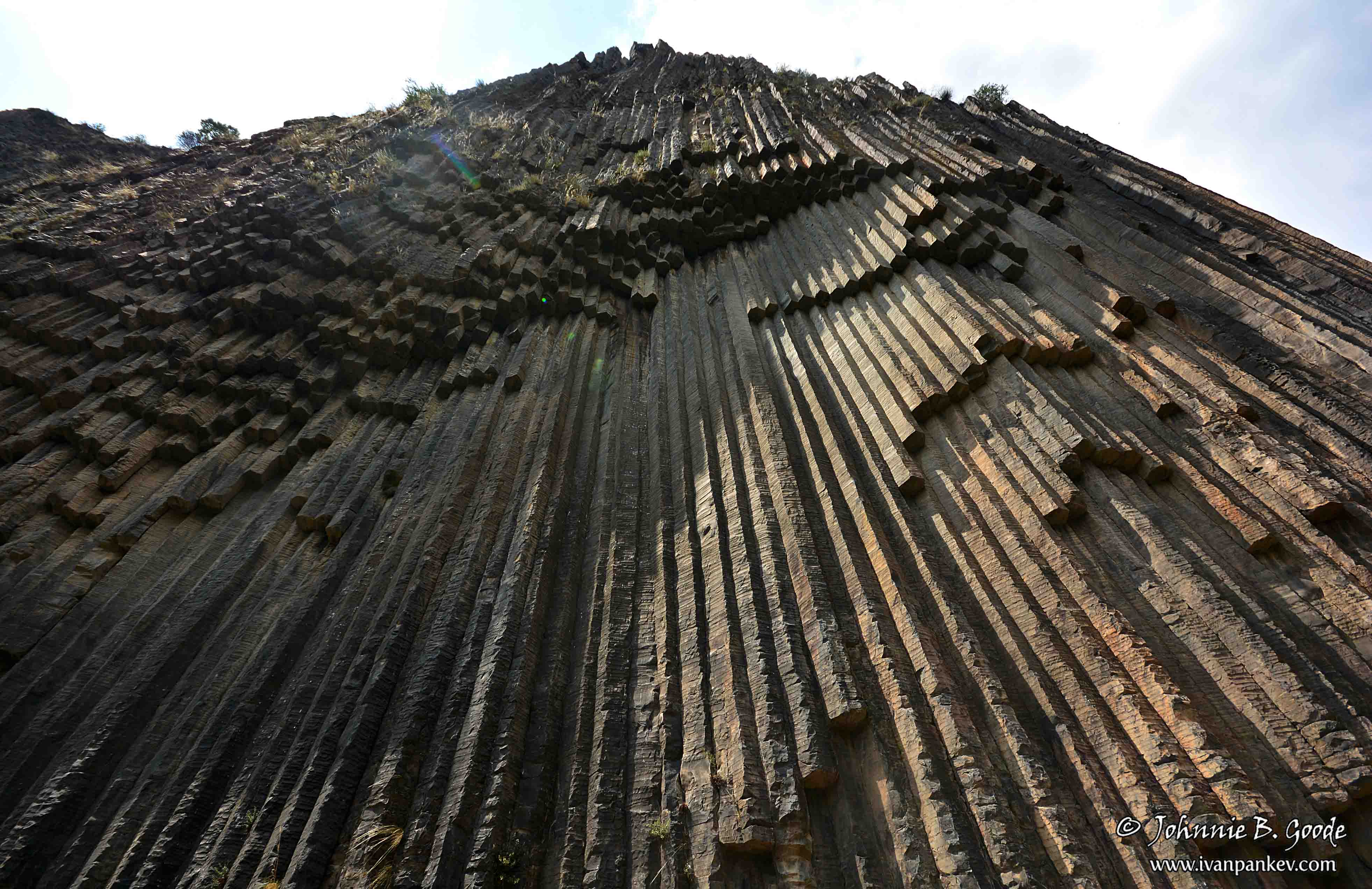 While walking through a nearby canyon, I came across an interesting rock formation. It was similar to the Giant’s Causeway in Northern Ireland. Here, however, the hexagonal basalt cylinders did not go down, but climbed up the wall of the gorge itself, which looked like built of rock tubes. This natural phenomenon bore the suitable name “Symphony of stones”. 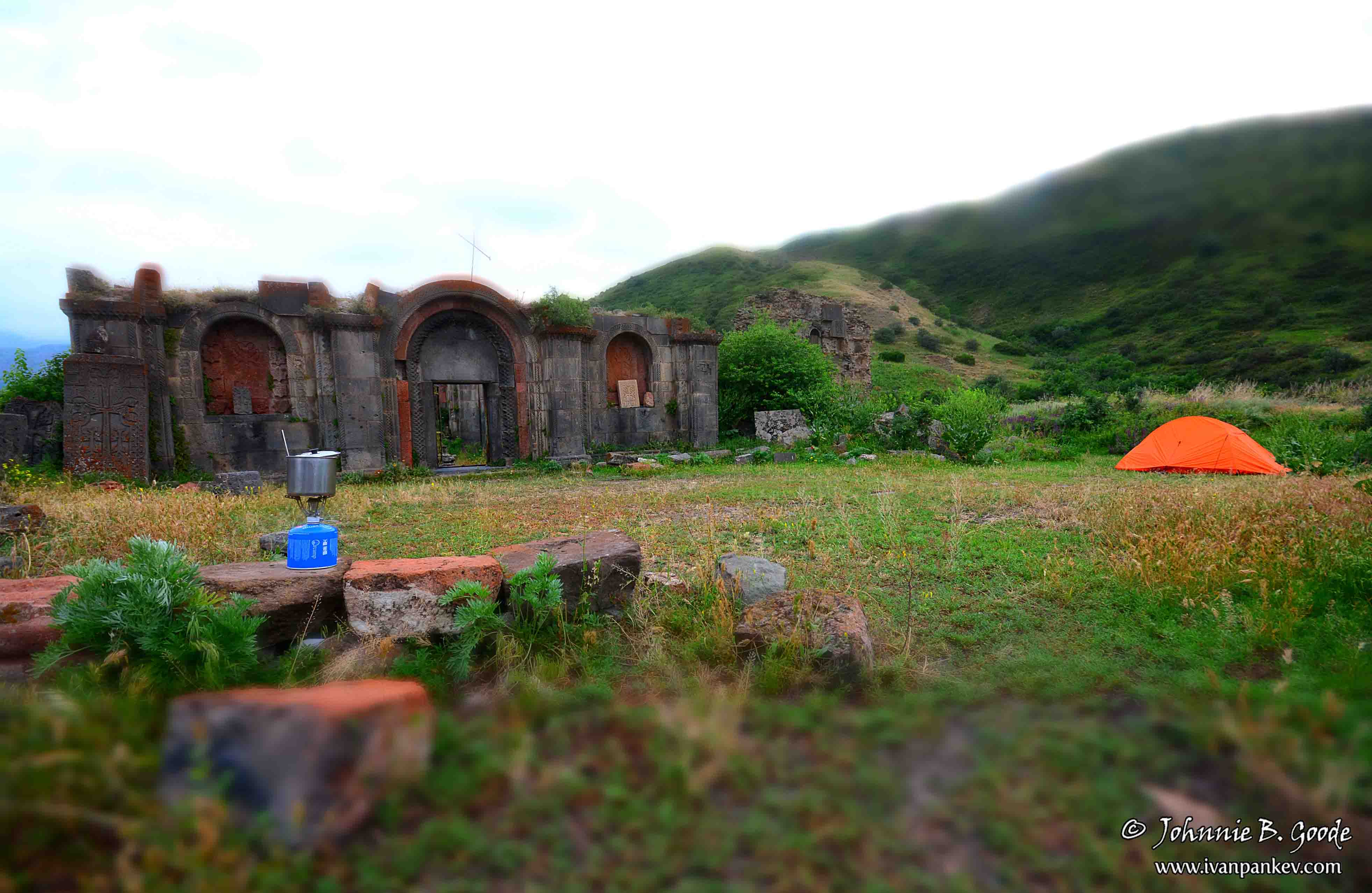 Overlooked by both foreign and local tourists, the charm of Havuts Tar Monastery lied in its state of neglect and seclusion. And where else a person could camp undisturbed among the ruins of a medieval church complex. Well, the next morning I experienced some stress seeing four snakes in 2 hrs., one of them just inches away from my bare foot.

The main church of Geghard Monastery, a UNESCO World Heritage Site, was quite interesting inside. The typical high arches and massive columns were supplemented by friezes in oriental motifs – lions and bulls. Moreover, in one of its chambers a small spring trickled. An outside staircase climbed to the second storey, which was carved into a rock. Through a hole in the floor one could see the lower level. 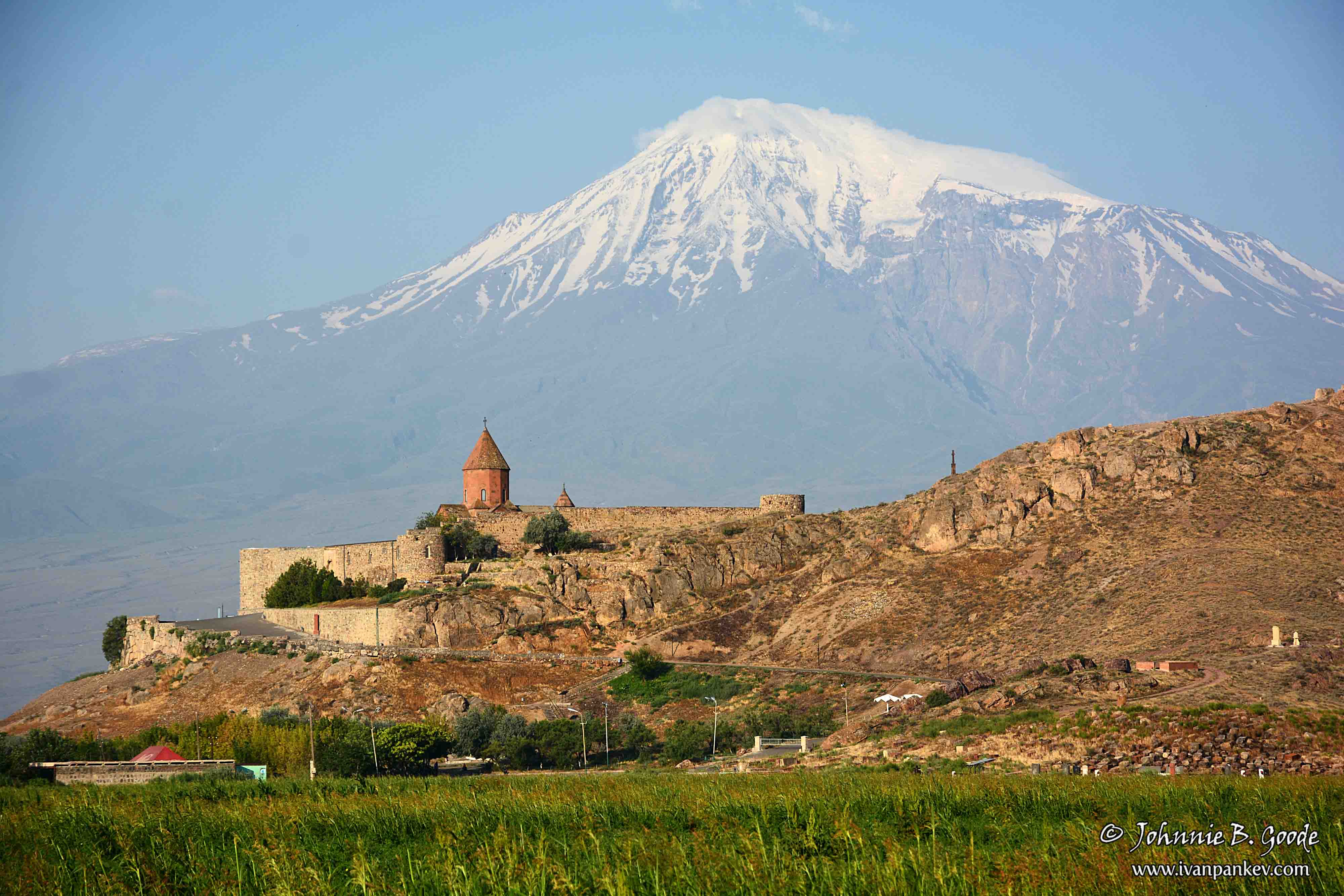 The monastery with the best location in all of Armenia was probably the castle-like Khor Virap. The views of the icy slopes of the sacred to the Armenians mountain Ararat were breathtaking.

The Armenian capital did not impress me with its architecture, but the number of parks and green areas was striking. I cannot say that Yerevan was a beautiful city, but I liked. It reminded me somewhat of Sofia and La Paz simultaneously. Probably because of the many abandoned constructions and the mountain, towering in the distance. 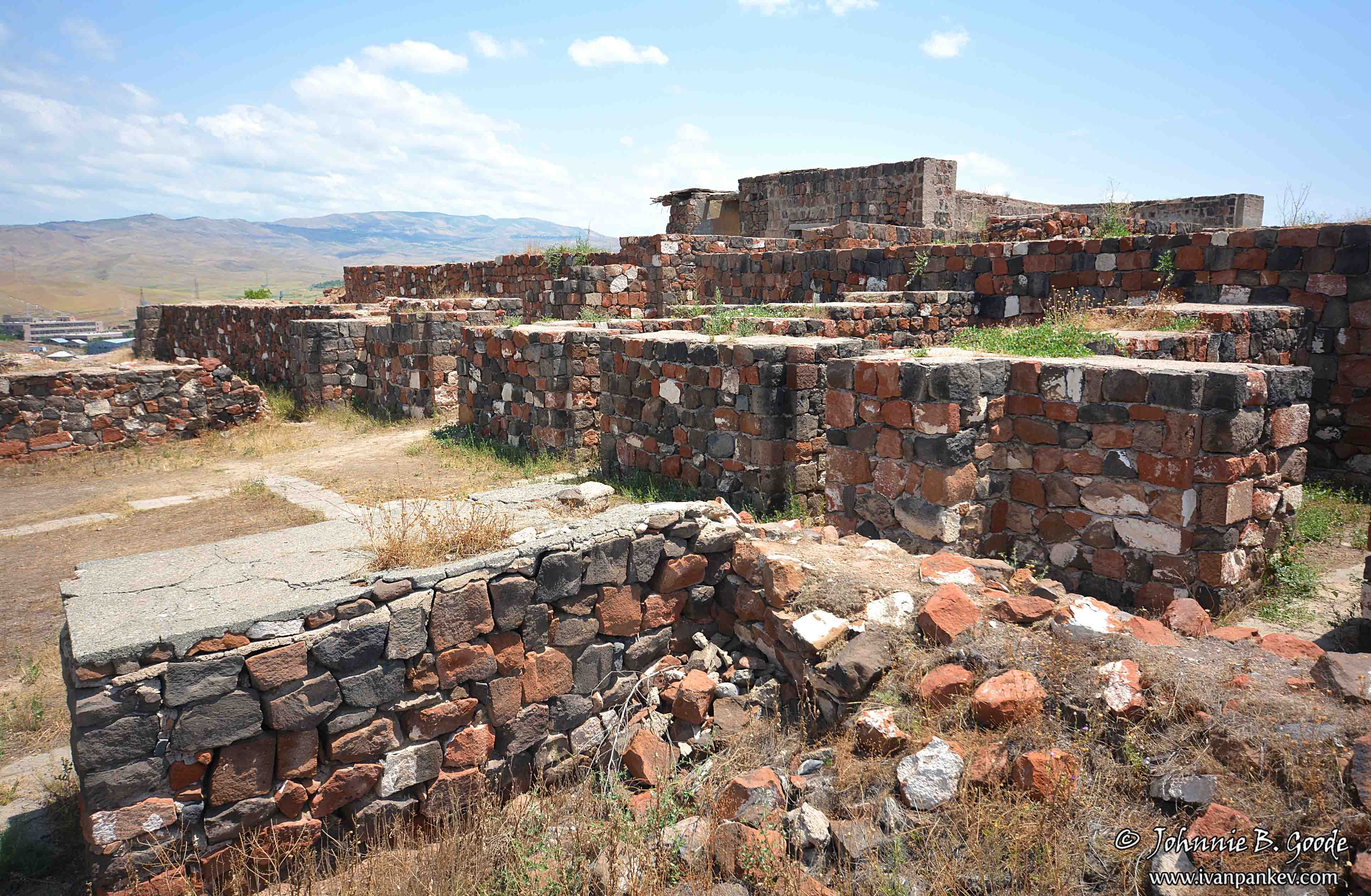 My first impression of Erebuni Fortress wasn’t good – numerous walls and foundations of buildings with a height of 1.5 m., upon which for conservation purposes too obviously and too much concrete had been poured. There was a group of young people (probably students) carrying out active excavations – digging holes with metal spatulas, sifting dirt, … For the first time in the region I saw that something was happening in this field, rather than simply relying upon old artifacts. The hill also had panoramic views of Yerevan. 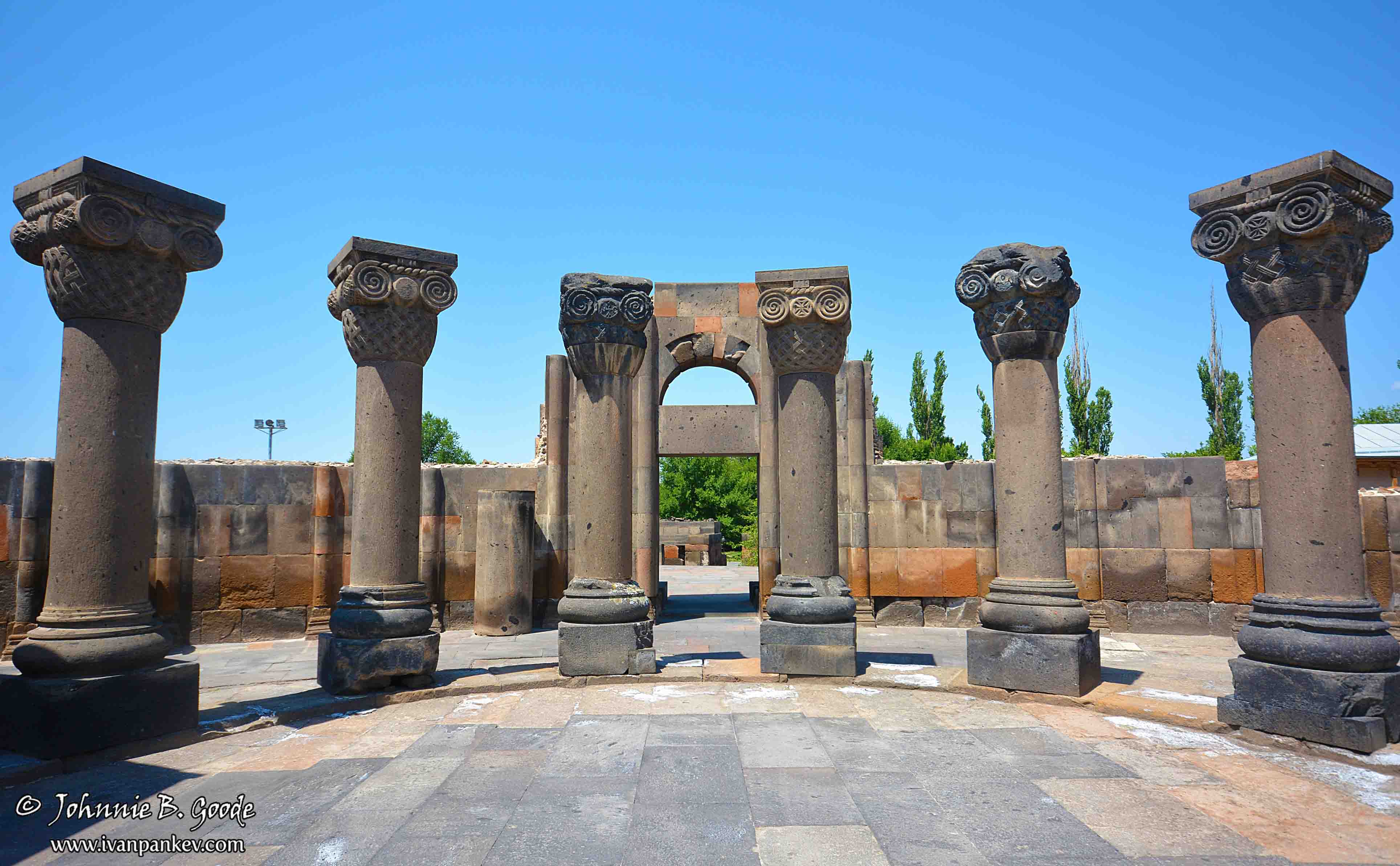 Built in the VII century the Zvartnots Cathedral, dedicated to St. Gregory the Illuminator, had been considered one of the most beautiful churches in the world. It had been destroyed by an earthquake back in the X century. So there was not much left but this temple was still worth visiting for being unique in Armenia with its rotunda shape. 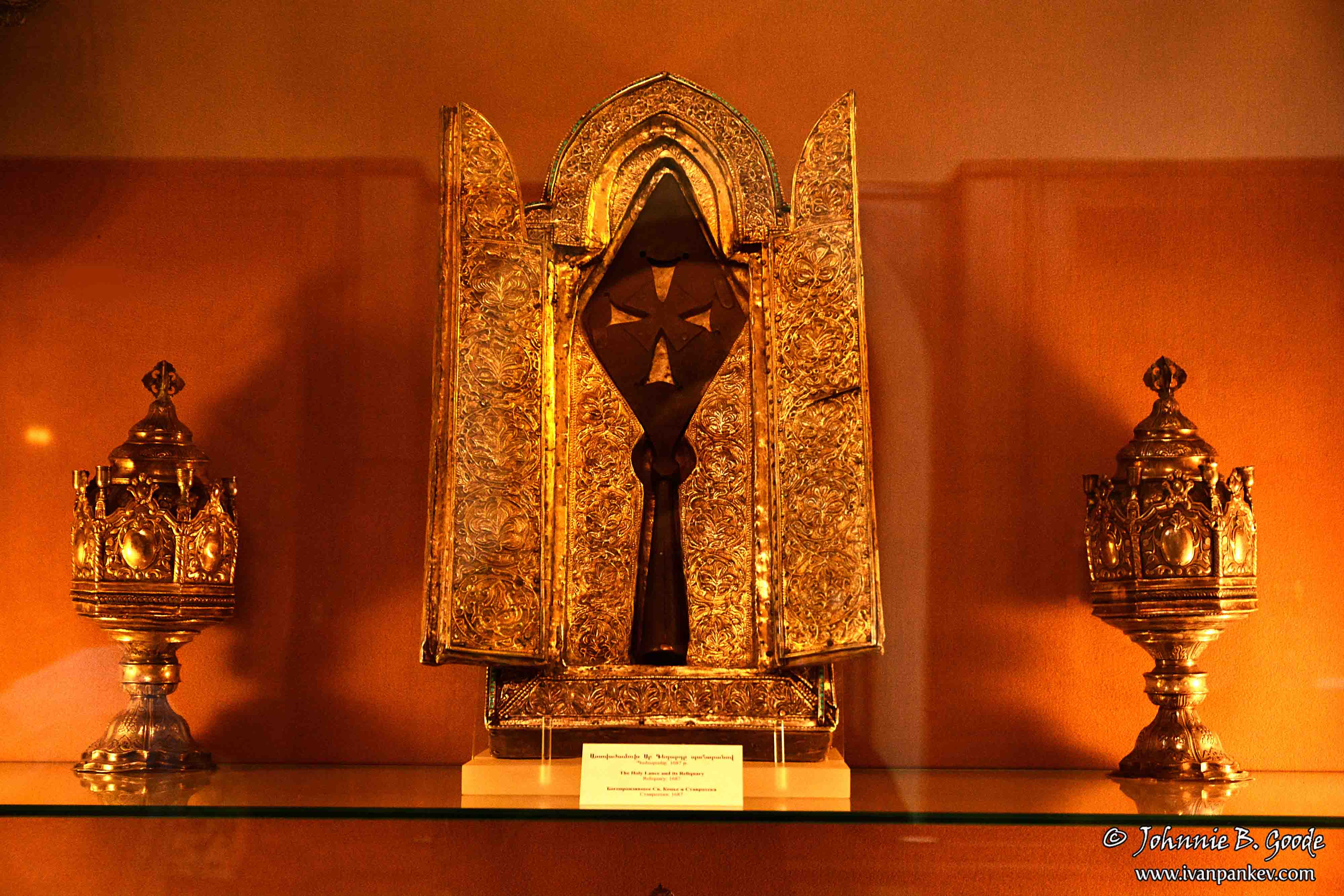 Etchmiadzin was regarded as the Armenian Vatican. In the center of the city there was a large walled complex of religious buildings. Among them the Etchmiadzin Cathedral, a World Heritage Site, towered. If the signs of the exhibits in its treasury were true, there were relics of more than 10 saints here. Among them St. George and St. John the Baptist. In addition there was a piece of Noah’s Ark, a piece of the Holy Cross and the weapon used by a Roman soldier to pierce the side of Christ on his way to Calvary. 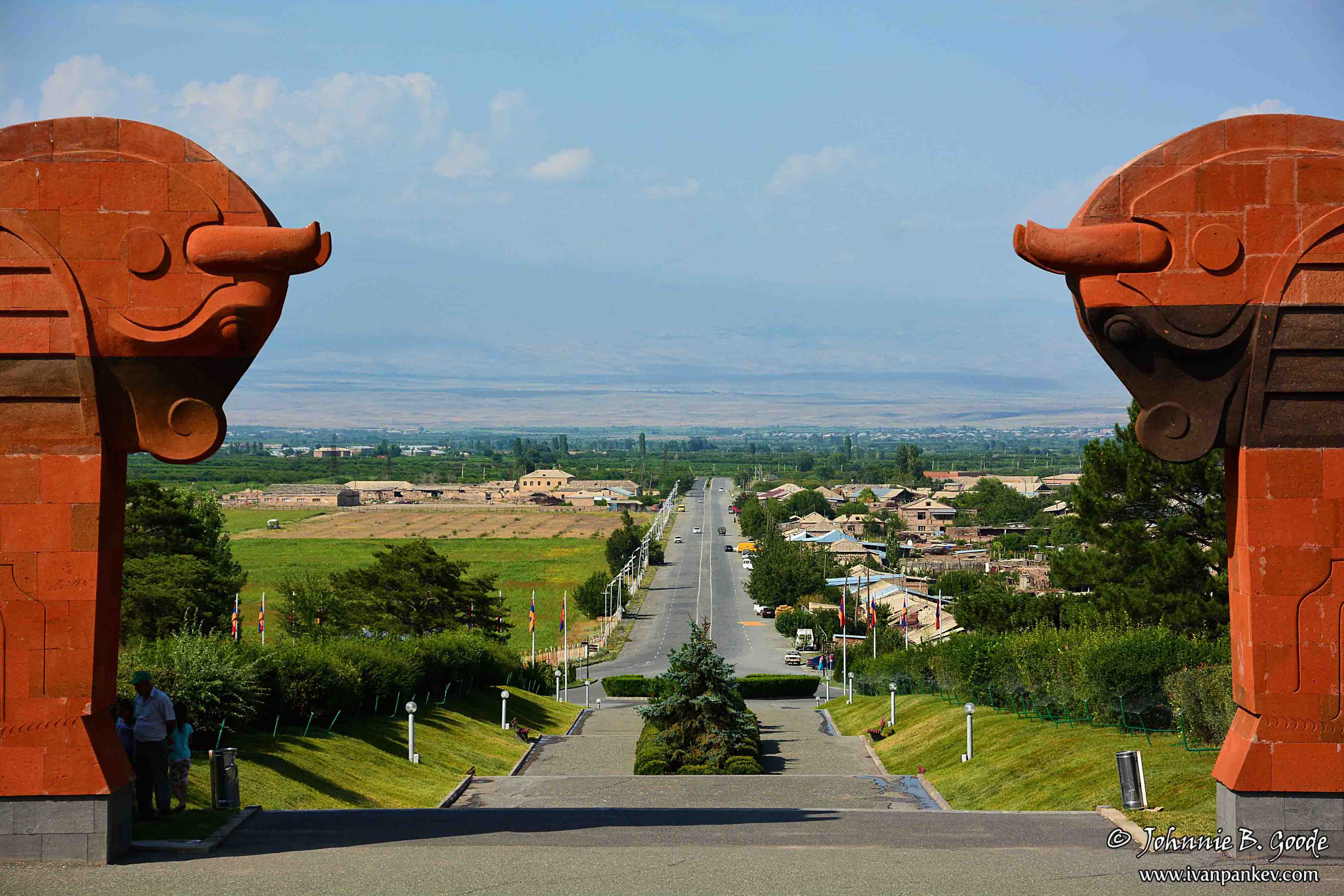 For the Armenian people Sardarapat memorial was equivalent to our Shipka. Here in 1918 the forces of the First Armenian Republic under the command of General Andranik stopped the advancing Turkish invaders and saved the country from a likely annihilation. Nationalists treated a visit here as a kind of pilgrimage.

My easiest ride for this trip was with Sarah – for just one day we hitchhiked from Tbilisi to Yerevan. I suggested that she accompany me to Kari Lich Lake at the foot of the Aragats volcano. She was even willing to climb to the top, although she didn’t have a sleeping bag. Along the trail the 17-year-old Lev and the 19-year-old Maxim joined us. 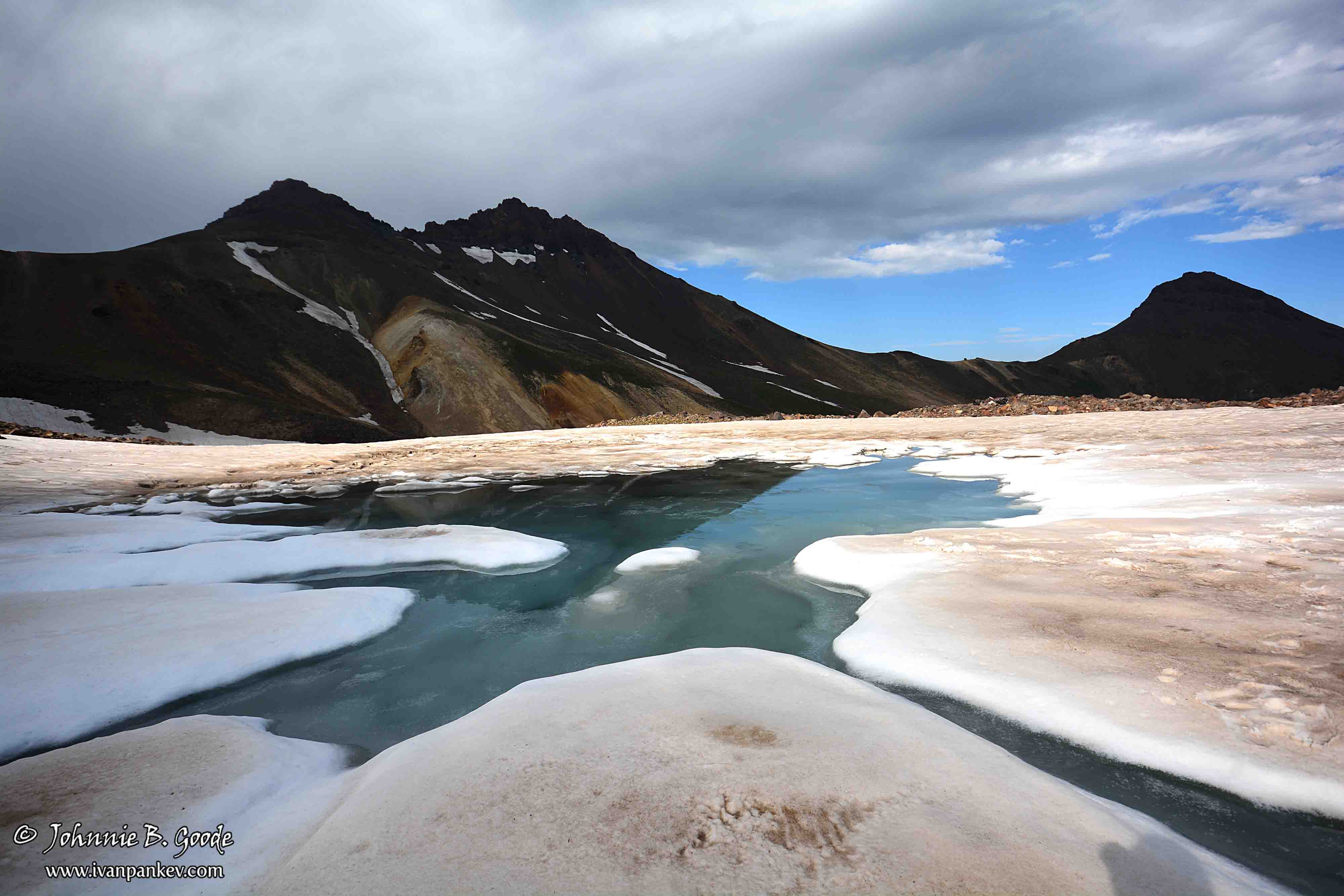 On August 14, 2016 I summited Armenia’s highest point – the extinct volcano Mt. Aragats (4090 m.) after a though night at 3600 m.: 4 persons, 3 sleeping bags, 1 two-person tent and I playing the unprecedented role of the grown-up as the only one experienced and properly equipped in the company of an American girl in sneakers and two Ukrainian boys. 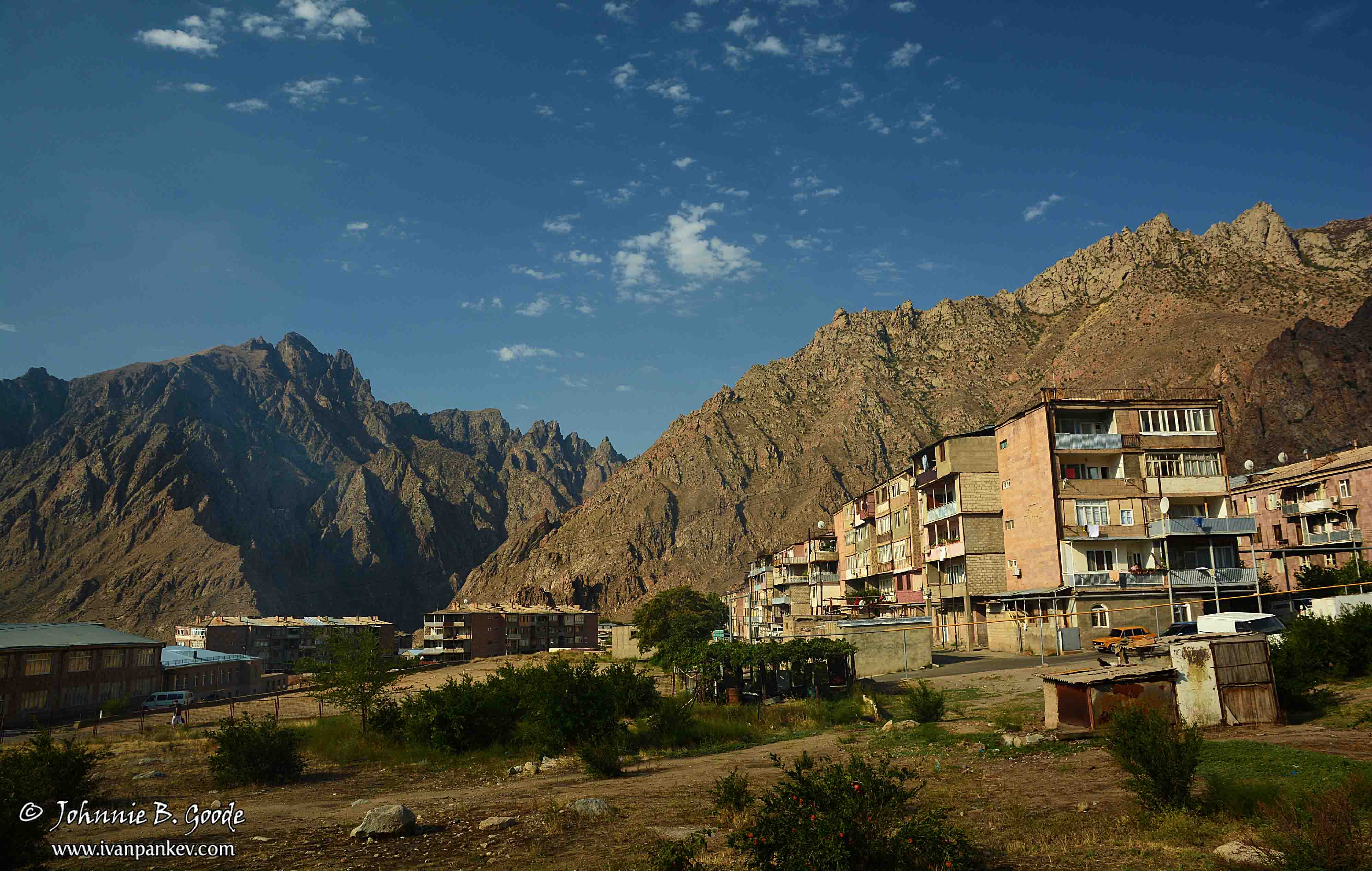 This ascent marked the end of my stay in Armenia. It took me two days of hitchhiking to reach the town of Agarak and the Iranian border. Here the landscape was completely different – dry and treeless. As if to prepare me for the crossing of this imaginary line separating Asia from Europe. 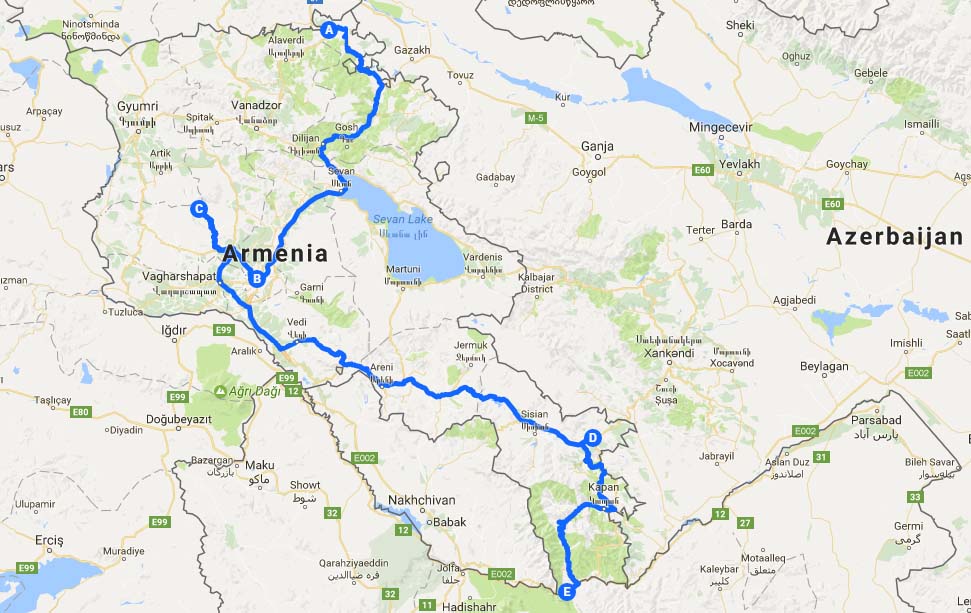 After almost four months of wandering around the ancient provinces of Lycia, Cilicia and Colchis – trekking, climbing peaks, visiting numerous churches, monasteries and archaeological sites – it was just about time to cross to the territory of another powerful ancient empire – Persia.