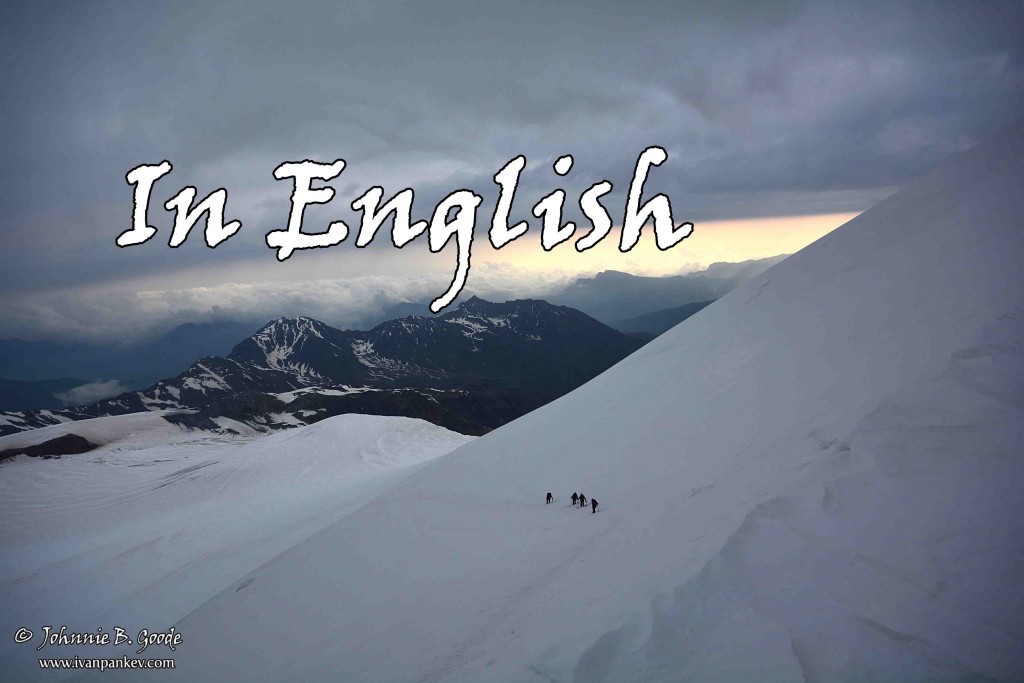 This is the story of my 5-month eastern journey through Turkey, Georgia, Abkhazia, Azerbaijan, Armenia, Nagorno Karabakh and Iran. This part is about our accent of Mt. Kazbek (5033 m.).

Go to: “Part 5: The First Christians”

Armenia was the smallest country in the region (not counting the controversial republics) but boasted beautiful nature and a number of interesting sights. I hadn’t seen all, but had to go back to Georgia. 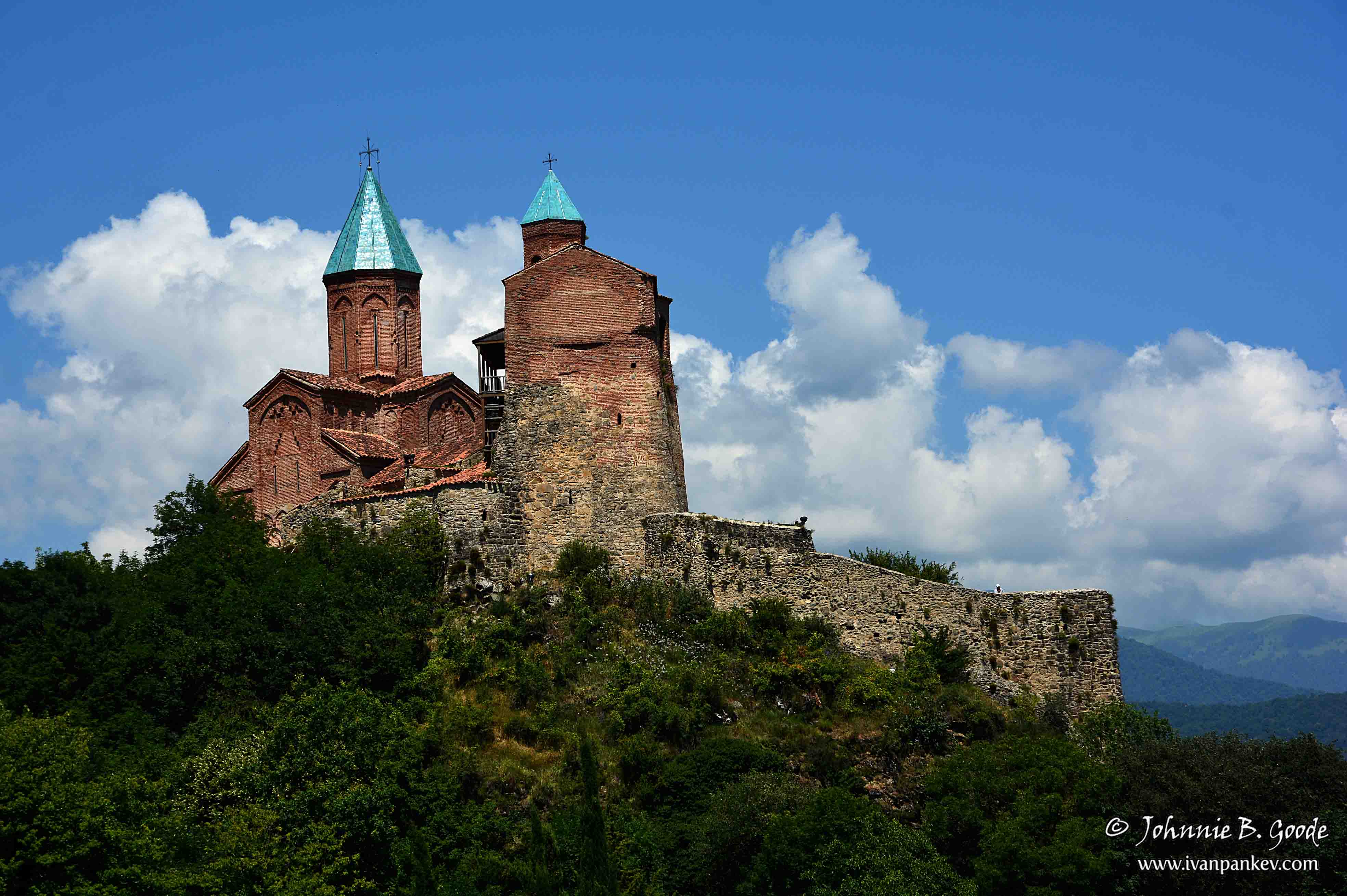 Two and a half months had passed since the beginning of my journey and my friends would arrive in Tbilisi soon with two bags of gear – everything necessary for attempting a climb of a five-thousander: a rope, crampons, ice axes and winter clothes.

I headed back to the Georgian capital, but had some time to visit Gremi first. In 1616 by Shah Abbas destroyed the former capital of Kakheti. All that survived was a stone citadel with a church, perched atop a small hill. 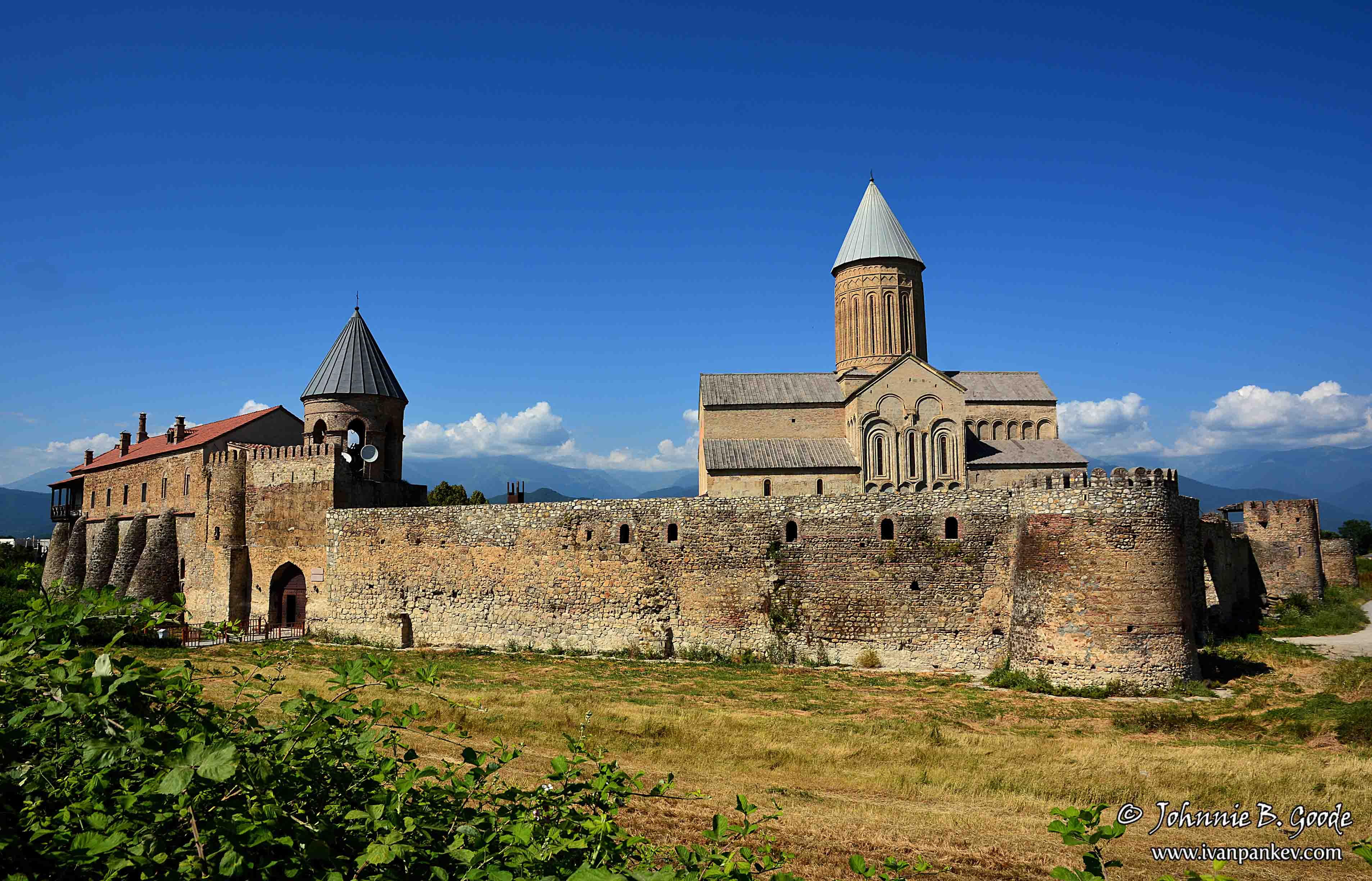 Though I was already fed up with monasteries, Alaverdi Cathedral was definitely worth the detour. It had been the highest church in the country for centuries. It was surrounded by a preserved city wall with several round defensive towers that encompassed such a huge area, that there was even a small vineyard inside. The monks had thought of everything. 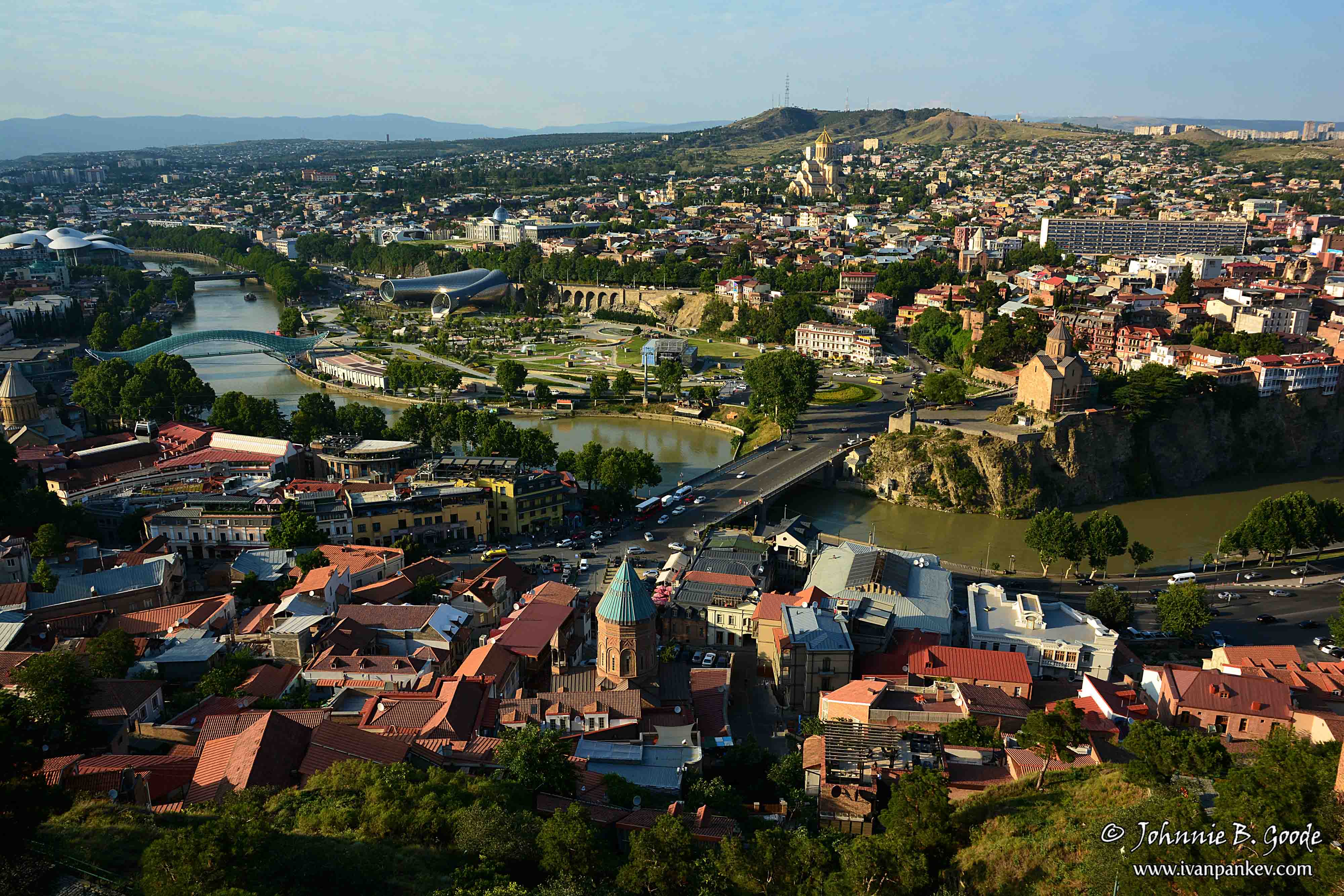 I had passed through Tbilisi twice before, but only transit. The first day of my stay I went out shopping, I wanted to prepare everything in order to head directly for the mountains and Mt. Kazbek. Finding gas canisters proved to be a tough task. Though I had a little time to walk around the Old City, I climbed to the Narikala fortress and enjoyed the panoramic views of the Georgian capital. 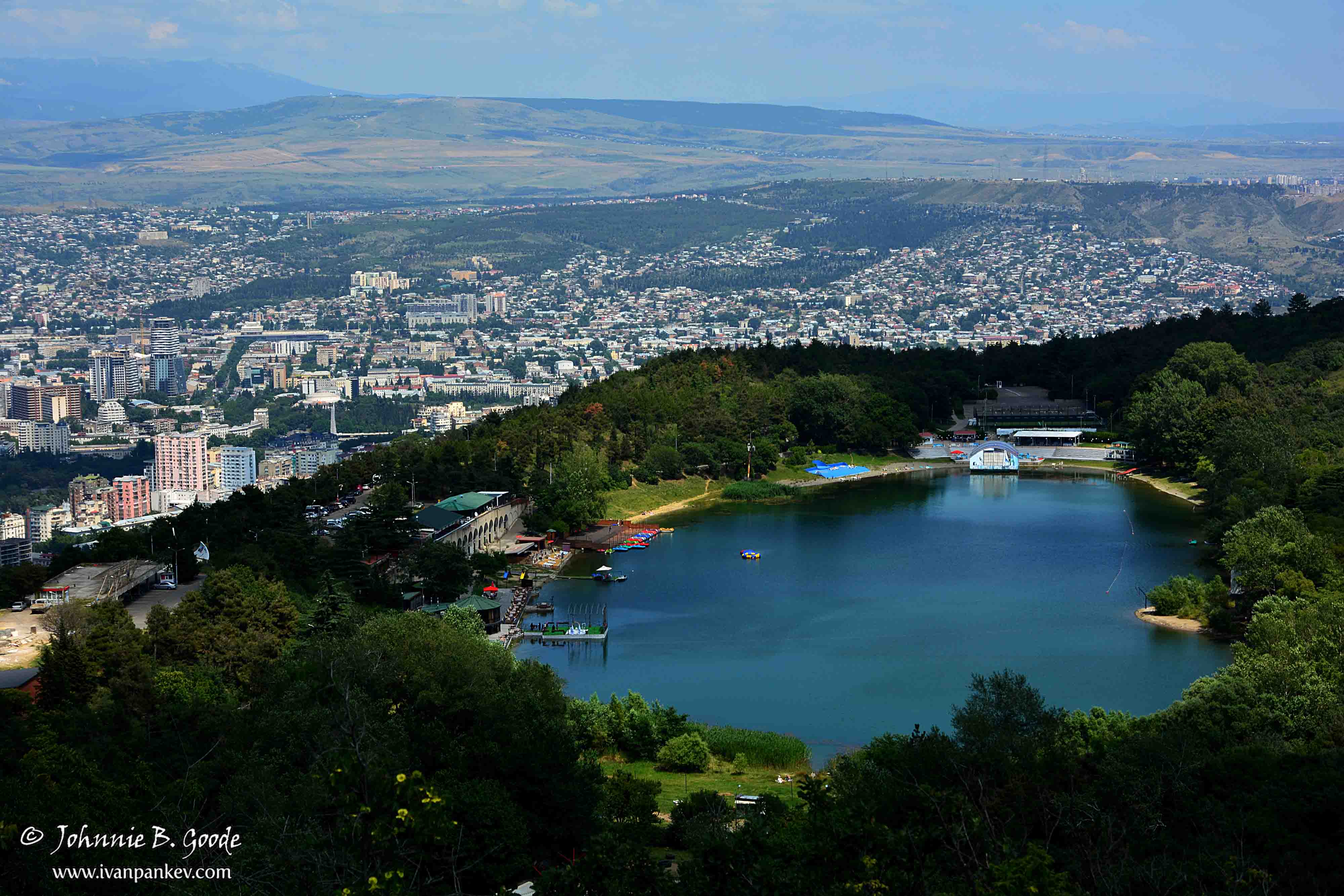 My plan was to spend the second day resting, but could not resist the temptation and did a long walk on the hills surrounding the city. I started from Mtatsminda and along dirt roads and forest paths went to Kus Tba Lake, a popular spot for water sports and recreation.

I went to bed in the evening knowing that at some point the gang would wake me up. Tatyana called me as scheduled at 3:00 p.m., but the news surprised me. They were still in Istanbul, the plane hadn’t taken off because there had been army men on the runway, gunshots had been heard. They didn’t know when or if they would arrive. A quick check on the Internet revealed: there had been an unsuccessful military coup in Turkey. 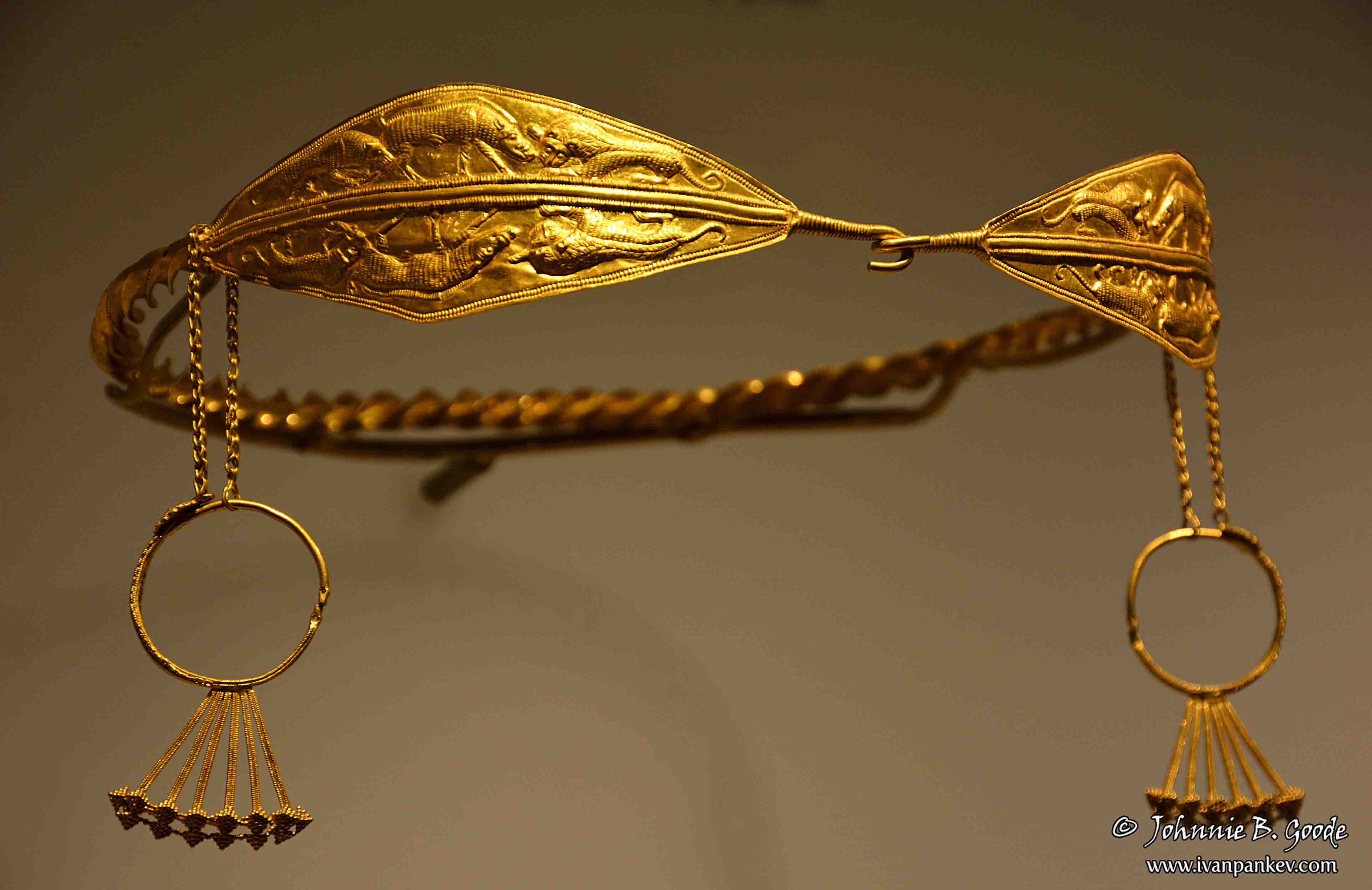 I spent the day waiting for news of my reinforcements. I left the hostel only once to visit the National Museum of Georgia which collection spread from fossils to new history. Most intriguing for me was the Treasury, consisting mostly of exhibits from Ancient Colchis. Yes, the same country as in the myth of Jason and the Argonauts. Some historians even have an explanation for the Golden Fleece – there were gold-bearing alluviums in the region and the local people used sheep pelts to cradle them. Often legends are based on actual events. 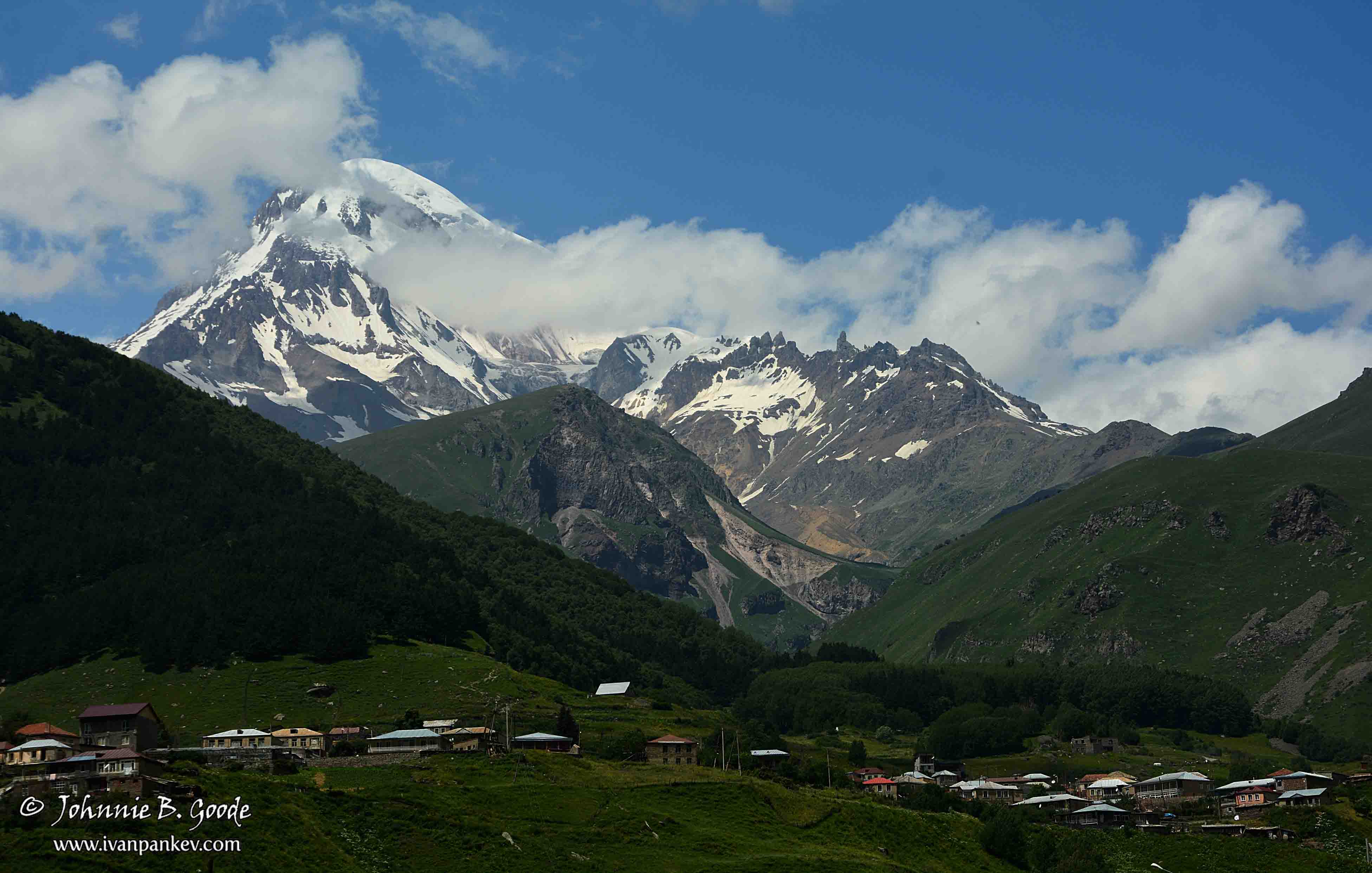 My friends arrived very tired after an entire day at the Istanbul’s airport. Even that was lucky because their flight was one of the very few at all. Krum’s and Lyubo’s short vacations did not allow any waste of time. After 4 hours of sleep we caught the first bus to Stepantsminda and Mt. Kazbek towering above it. 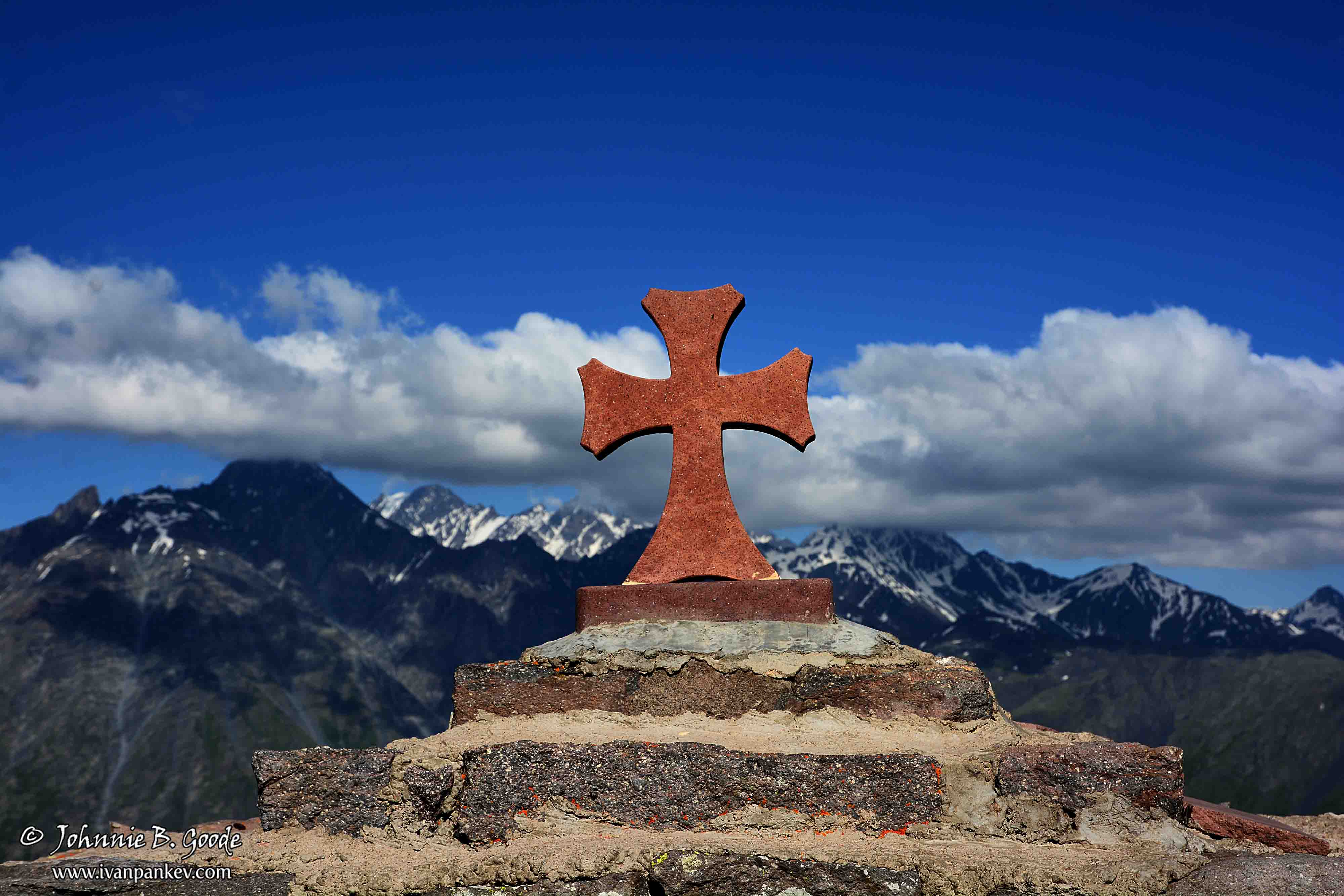 We headed straight up the trail without a clear idea where we would camp. The views were a compensation for the excruciatingly heavy backpacks. At some point we hid a bag with unnecessary baggage behind some rocks. Why did we drag it here in the first place stayed a mystery. 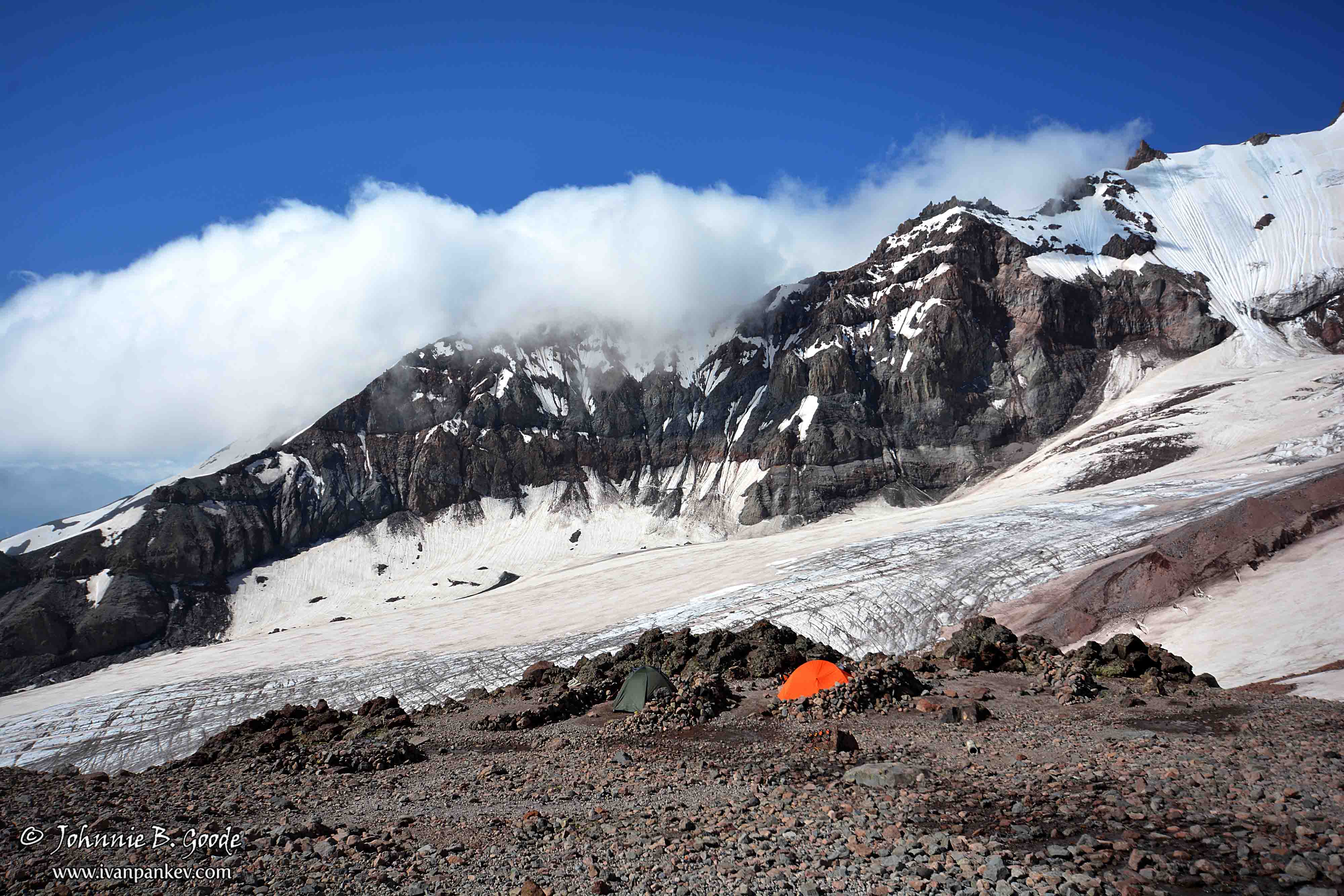 The websites were predicting too short good weather window – 2 days – and we were not acclimatized at all. Nonetheless, we pushed ourselves to the limit and we crossed the Gergeti glacier using our headlamps’ light. For Tatyana and me it was our first such experience, for Krum and Lyubo – second. Amateurs – it took us more than 30 min., just to tie ourselves to the rope. Anyway, after 10 hrs. of walking and 2000 m. of ascent we reached the Base camp well into the night. 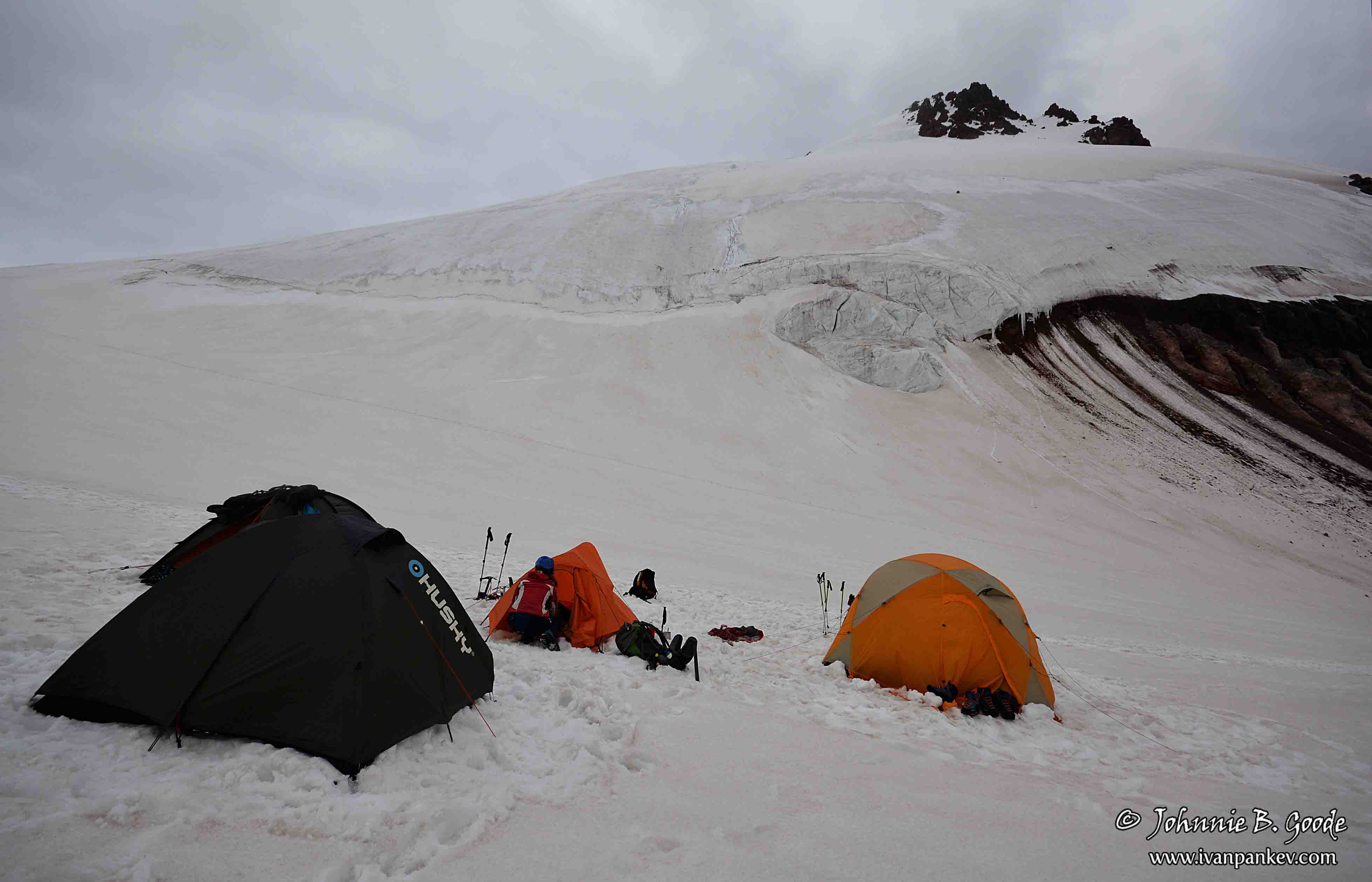 The group woke up tired late the next day. I put some effort into convincing them to move to a higher camp. Sleeping on a glacier at 4300 m. didn’t sound fun, especially with our almost summer tents, but this was the only possible way to squeeze in the good weather window. 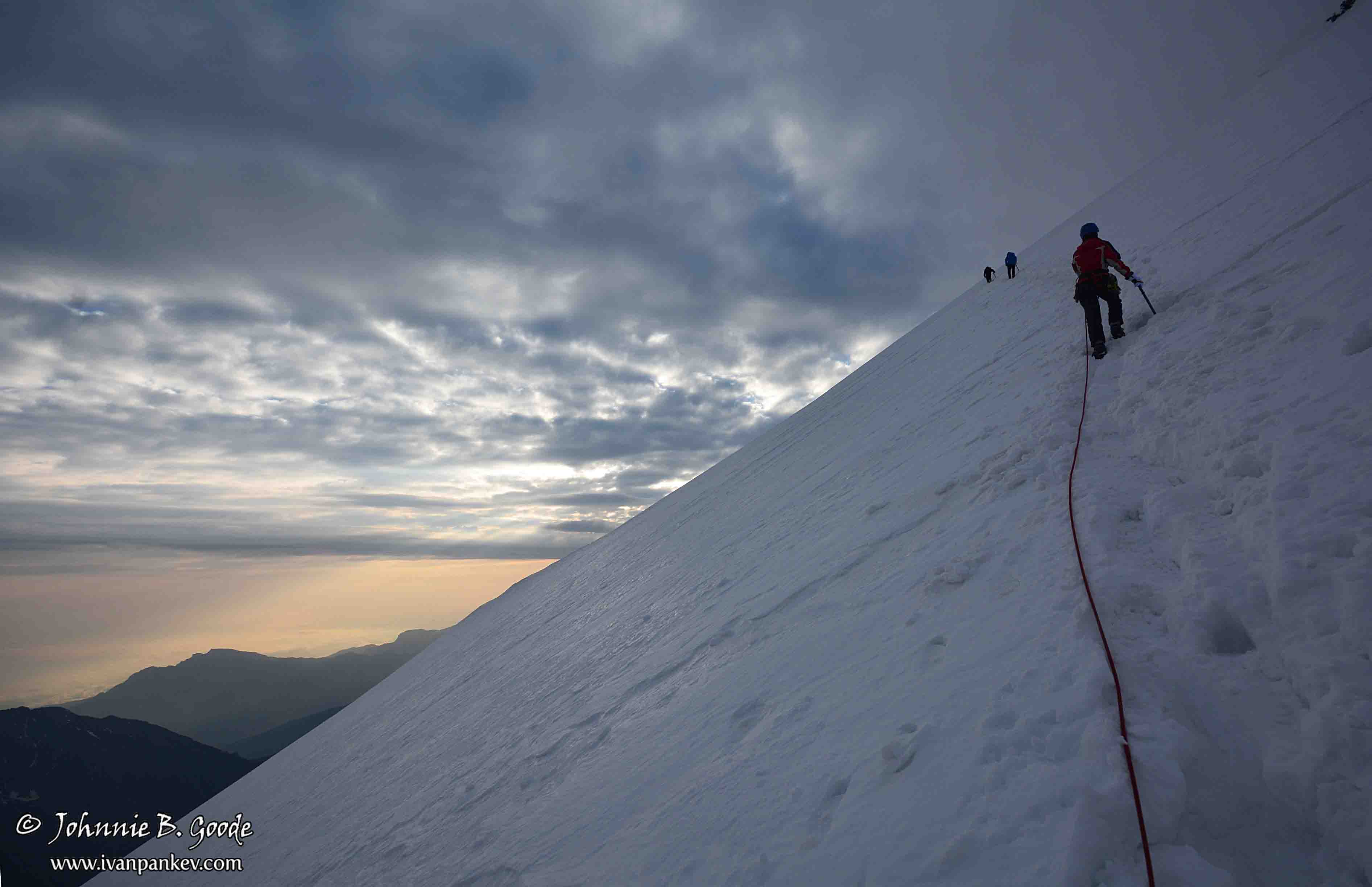 It was a surprisingly pleasant, but short night. It took us more time than anticipated to have some breakfast, prepare the backpacks and tie ourselves to the rope, so we started late – at 4:00 a.m. We tried Krum and Lyubo first before we let Tatyana lead and set the pace. The sunrise caught us on the slopes of Mt. Kazbek and the weather was worsening. Before the final 100 m. of ascent the snowfall began. 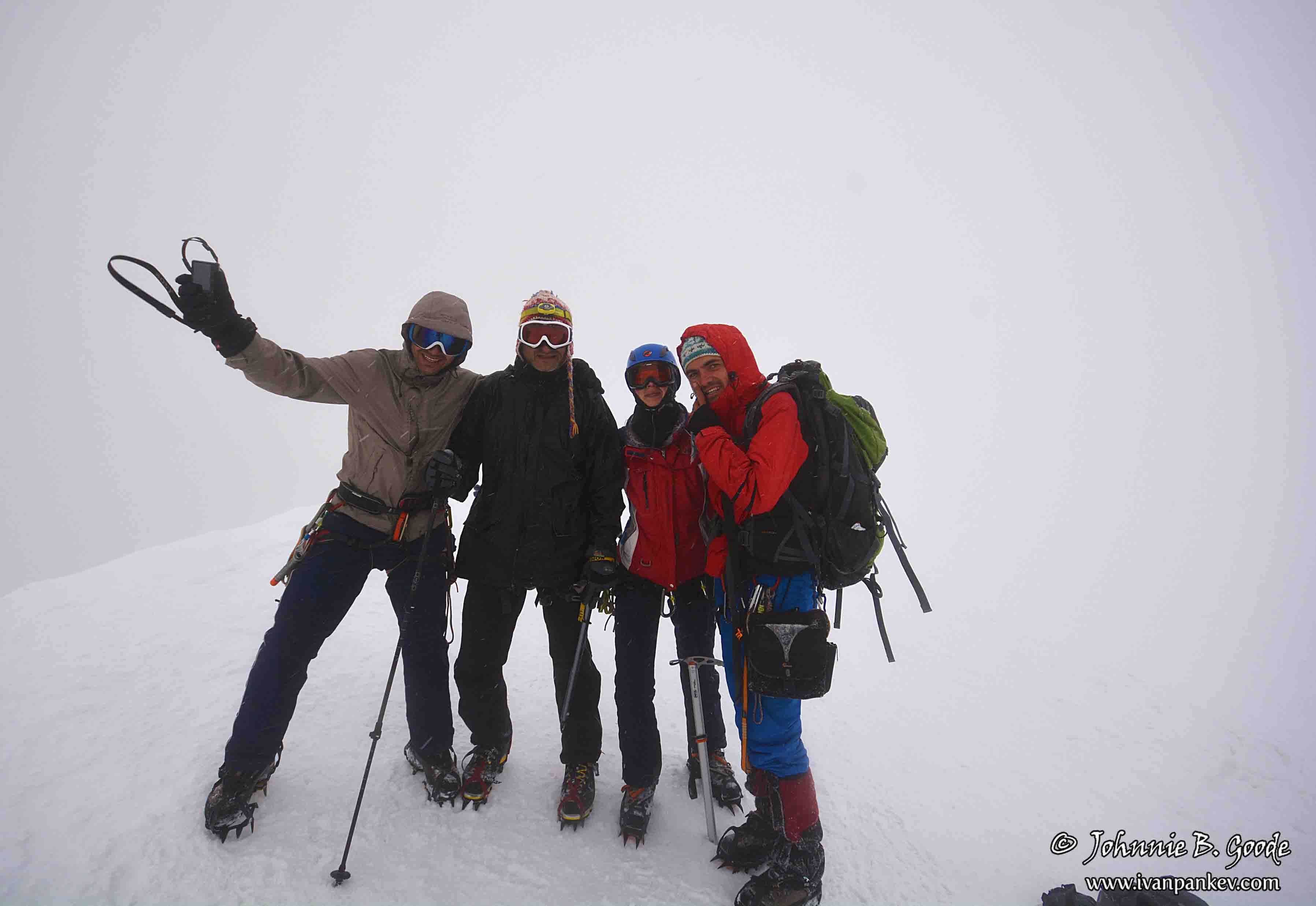 Despite the predictions for a short good weather window, the additional delay caused by the “unsuccessful coup” in Turkey, the lack of acclimatization and the fatigue at 8:01 a.m. on July 19, 2016 after only 43 hours since the start from Stepantsminda (1740 m.) we stepped on the top of Mt. Kazbek (5047 m.). Mission “Prometheus” was accomplished. In the background you can enjoy the promised views of the peaks of Elbrus, Shkhara and even Ararat 😀

P.S. According to the legend, this was the place where Zeus chained down Prometheus, because he gave the secret of fire to the humans. We ourselves didn’t see the Titan in question, but we also didn’t wander and look for him. 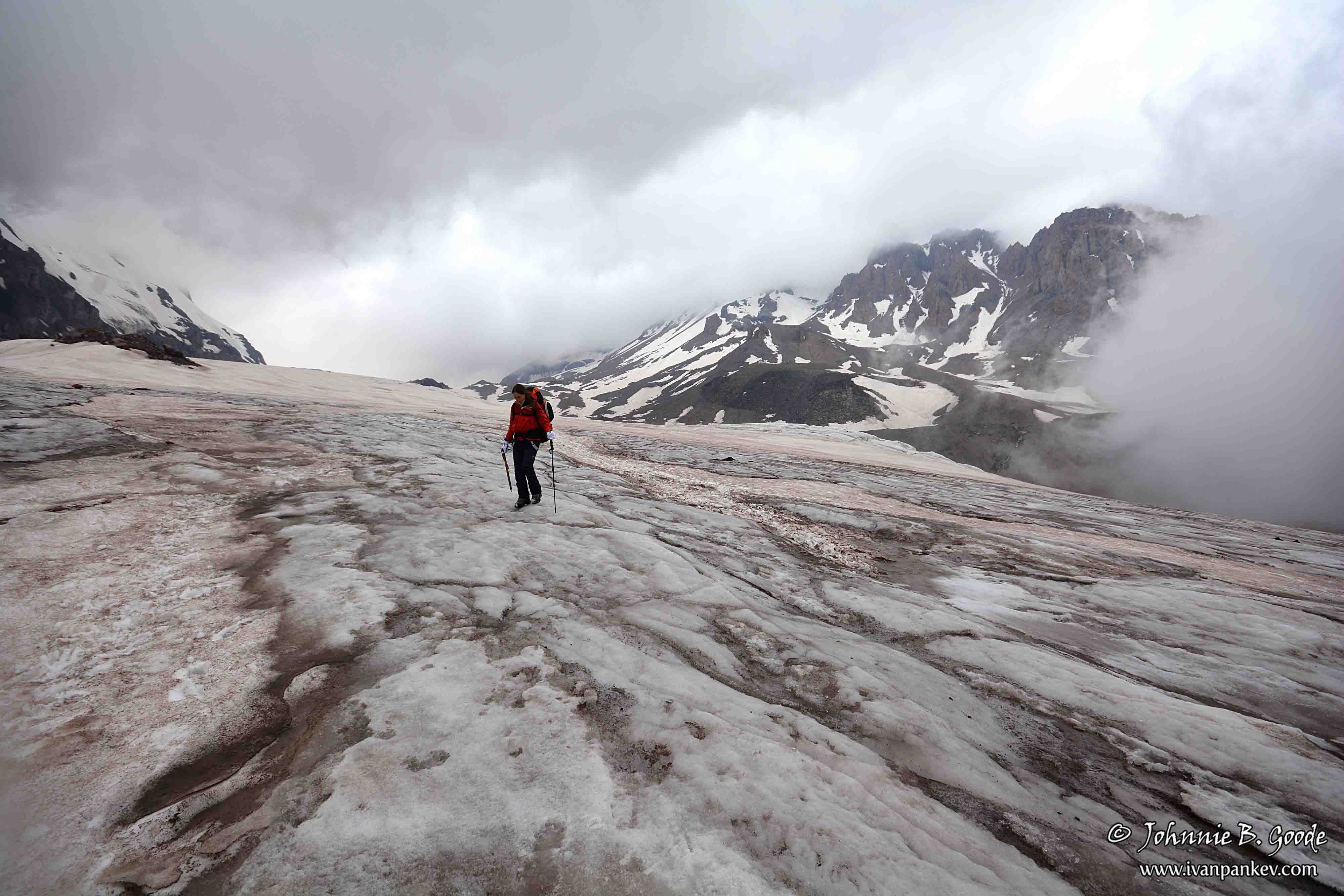 I hadn’t experienced such a phenomenon before – a thunder snowstorm. It prompted us to speed. We didn’t stay long at our camp either – we had too much lightning-attracting metal. While we were taking down the tent the stormy gusts of wind snapped one of its Duralumin poles as if it were a toothpick. At the Base camp we ate and rested for an hour before going down – my companions insisted on a bed and a warm shower. We reached Kazbegi at midnight after 800 m. of ascent and 3400 m. of descent for the day.

P.S. Today a group of three Ukrainian climbers got struck by lightning. One of them died on the spot. 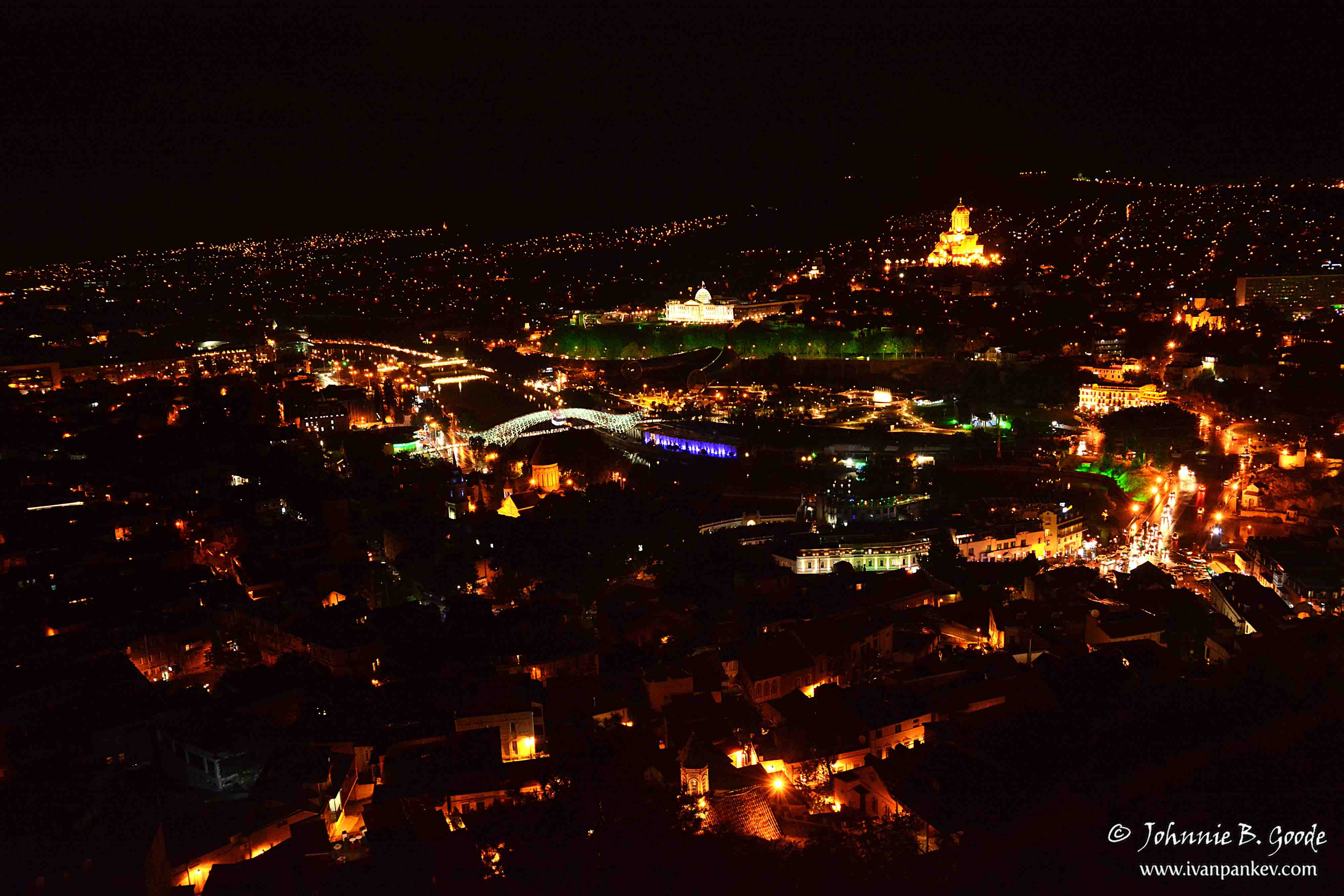 We were back in Tbilisi the following night and did a leisurely stroll around the beautiful Georgian capital. 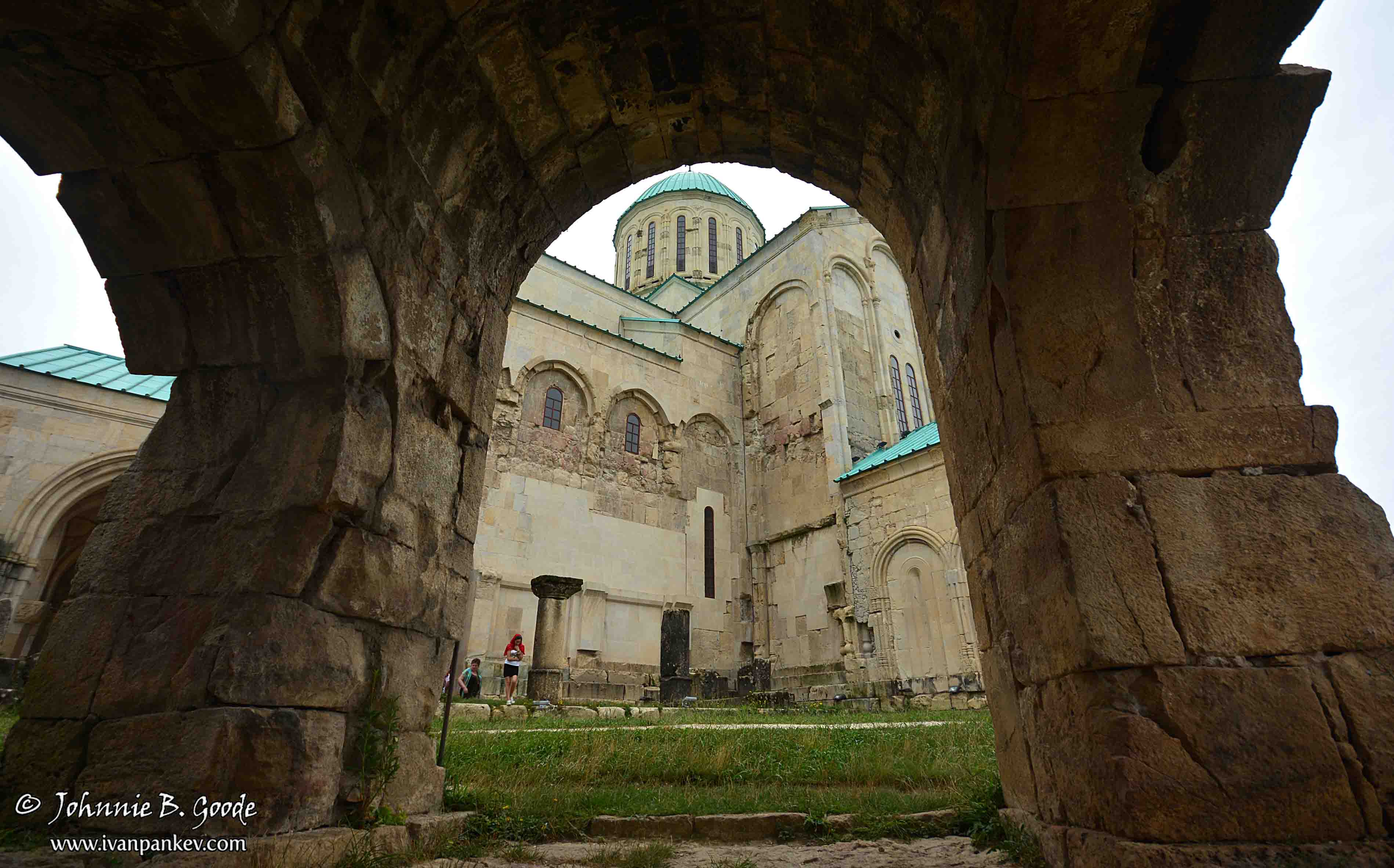 Krum and Lyubo had two more days before their flight to Bulgaria and they agreed to accompany us to Kutaisi. I was already bored of it, but I wanted to show the others the specific Georgian religious architecture. The Bagrati Cathedral was included in the UNESCO list, but it definitely was not among the most beautiful in the country. 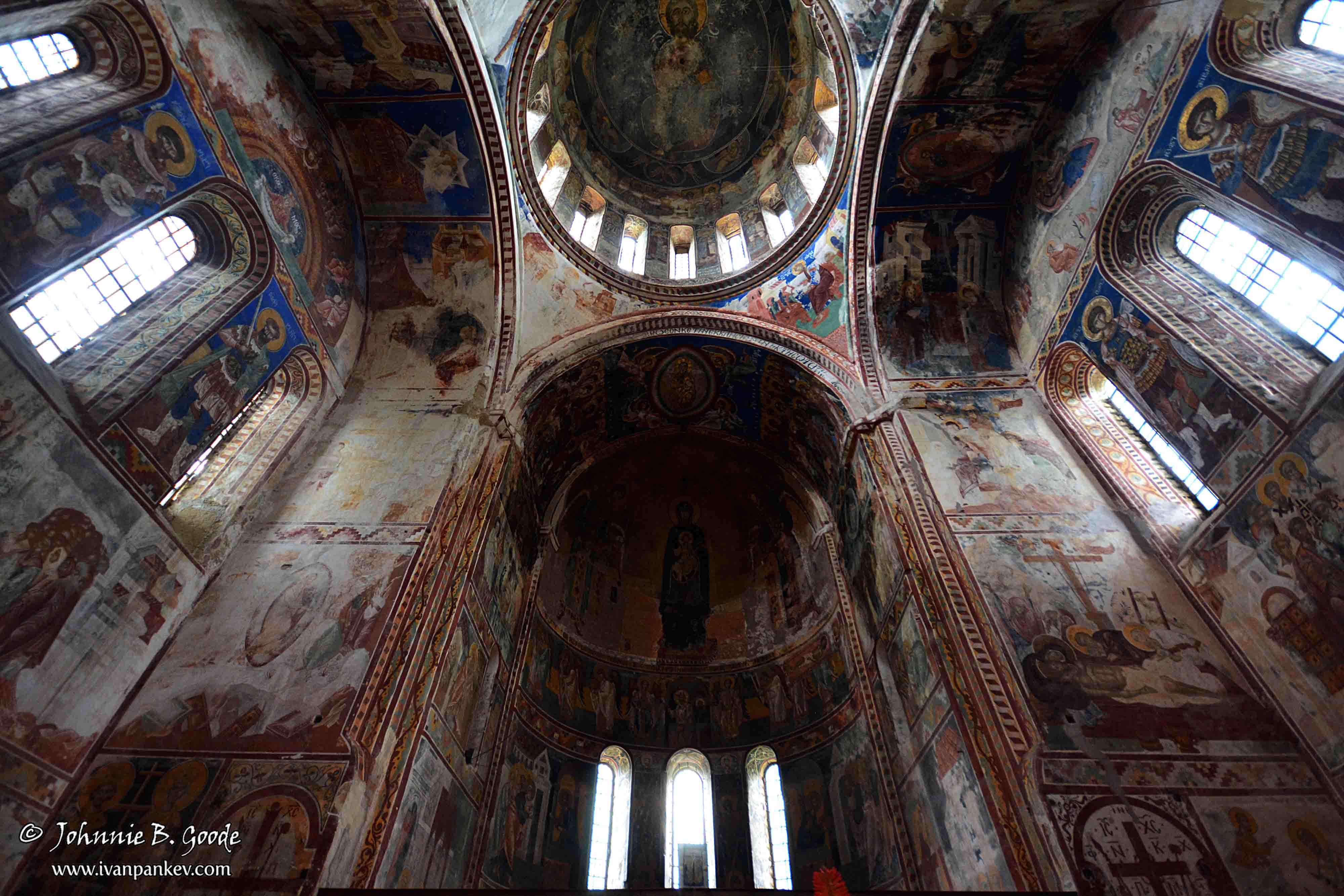 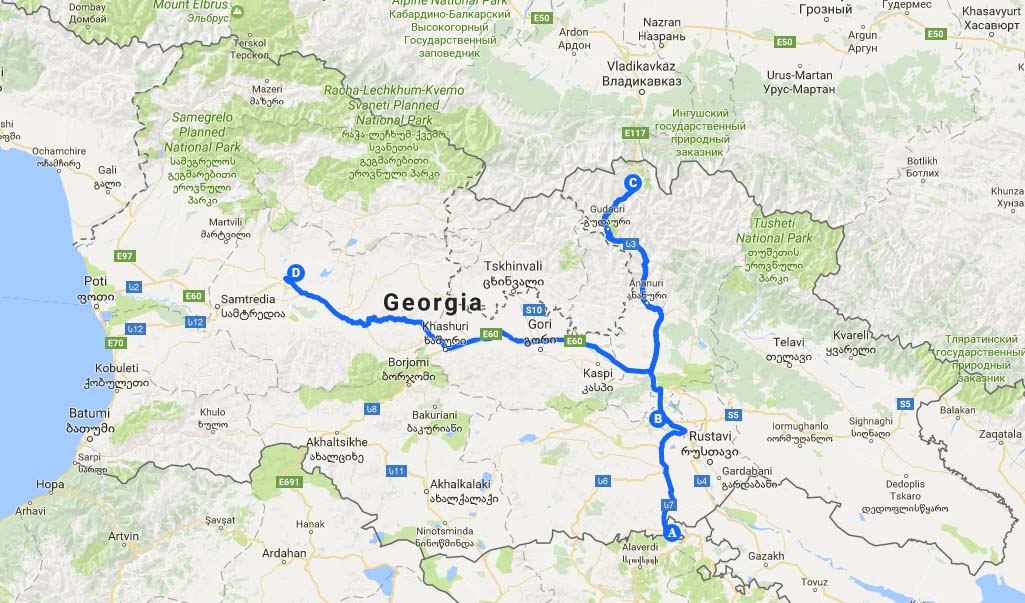 That was the end of this stage of my journey during which we managed to climb Mt. Kazbek, rather thanks to stubbornness and power of will than because of previous training or skills. The guys went back to Tbilisi and from there to our homeland, and Tatyana and I we caught the bus to Svaneti where we planned to do some trekking.

This a short video of our Mt. Kazbek accent: