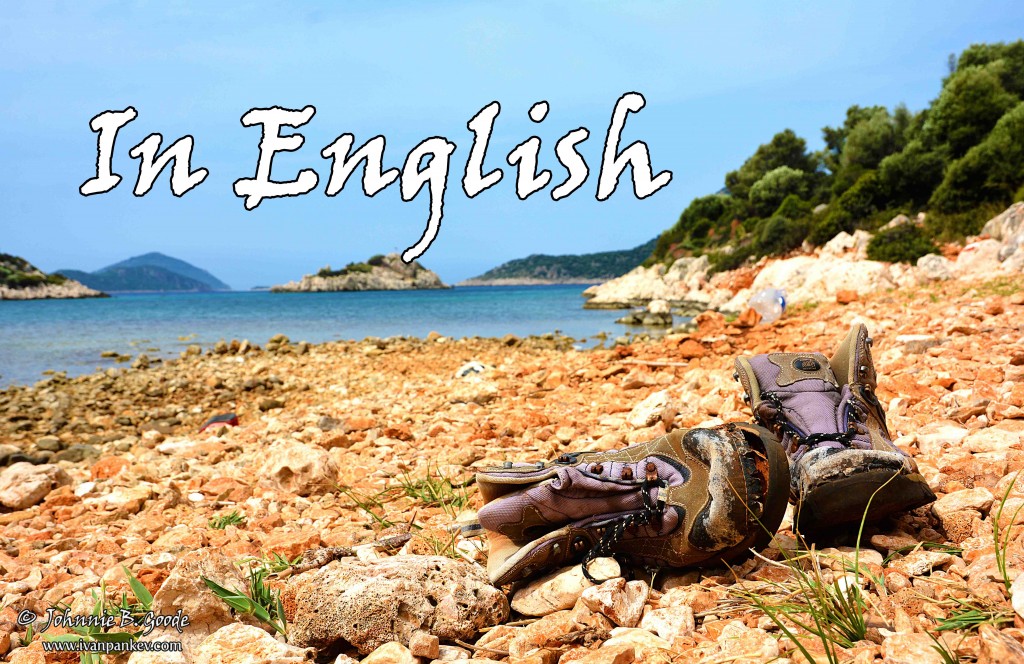 This is the story of my 5-month eastern journey through Turkey, Georgia, Abkhazia, Azerbaijan, Armenia, Nagorno Karabakh and Iran. This part is abouth the Lycian Way.

Two days after I returned from South America I had an interview for BiT and I was caught off guard by the question: “What is your next destination?”. My spontaneous response was: “Southeast Asia”. Then I changed my mind – the “Stans” of Central Asia seemed more attractive to me. I gave up this idea though, because of the need for visas for each of them. Meanwhile, my girlfriend and I were thinking about ​​a long-distance trek, for example Kom-Emine along the Balkan Mountains. Things worked out their own way and on May 1 we were already on a bus to Istanbul to start something we had never done before – a long distrance trek (the Lycian Way). 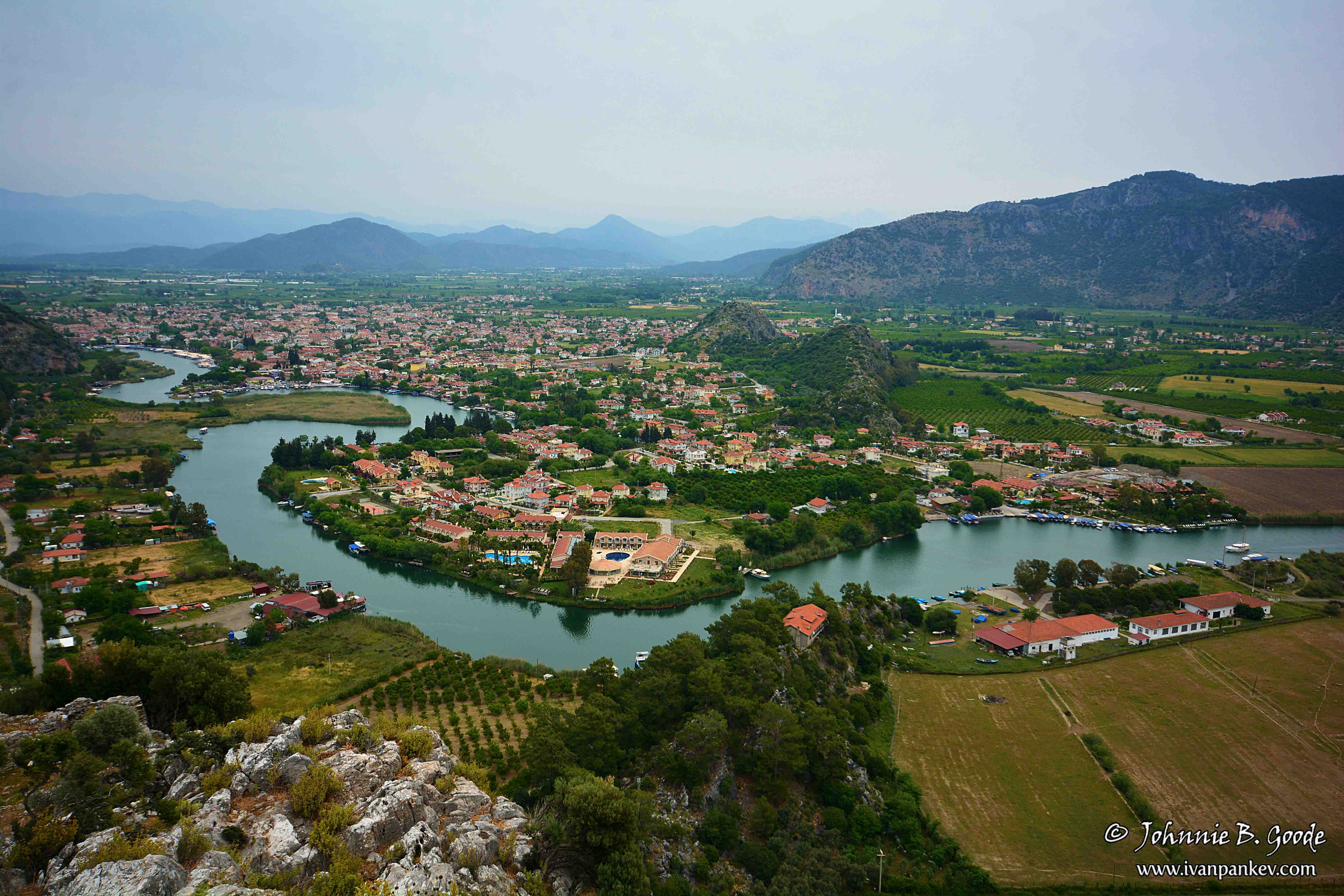 Before we take the Road, we visited the ruins of the ancient Carian city of Kaunos, part of the UNESCO World Heritage List. Consisting of rock tombs, acropolis, agora, amphitheater, Roman baths, etc., it was scattered over a large area around the picturesque valley of the Dalyan river, which in ancient times served as a border between Lycia and Caria. 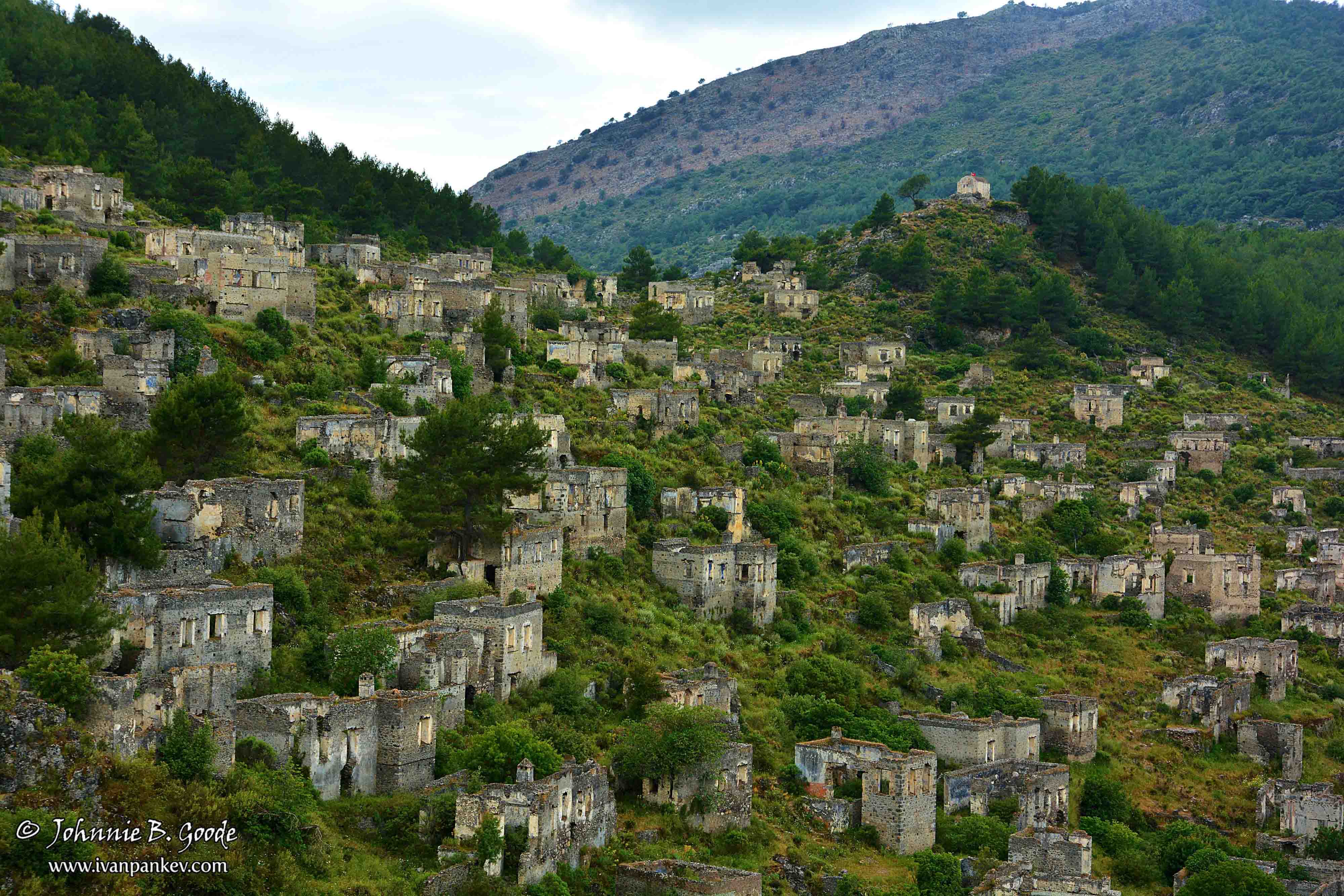 The Lycian Way starts officially at Ölüdeniz, but we walked it from its very beginning – Fethiye. This took us to the “ghost town” of Kayaköy, known in ancient times as Lebessos. Its Orthodox inhabitants deserted it in 1923 in a population exchange between Greece and Turkey. The place could easily be used for filming a movie like “Life After People”.

I had imagined the Mediterranean coast of Turkey flat and with endless sandy beaches. It was mostly hilly, sometimes rocky, often covered with pine forests and the beaches were rare. 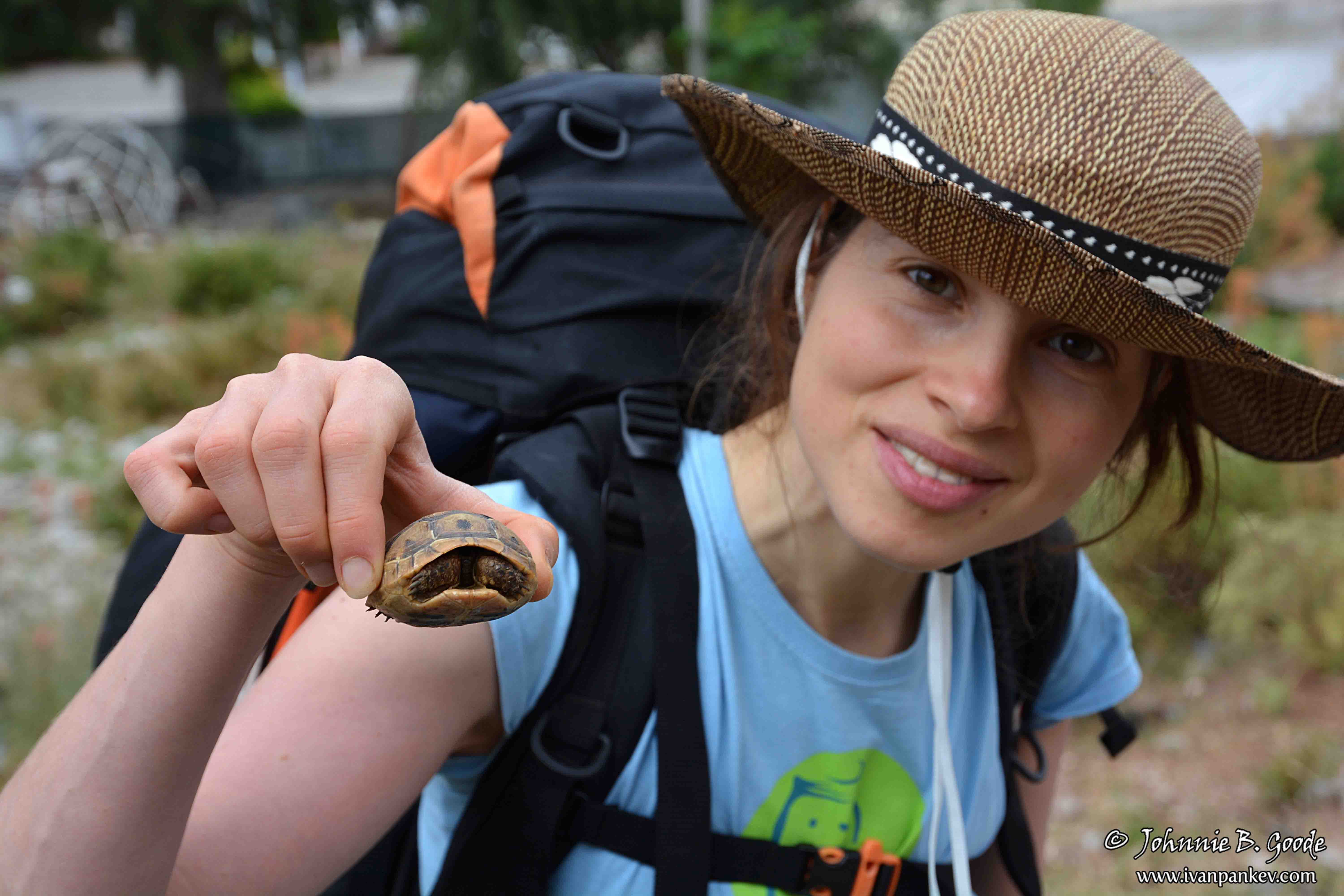 To fill in the long and often monotonous hours of walking we started a simple game that consisted of looking around and trying to spot tortoises. There were good days with 6-7 representatives of those prehistoric reptiles and bad ones with none. By the end reached 46. 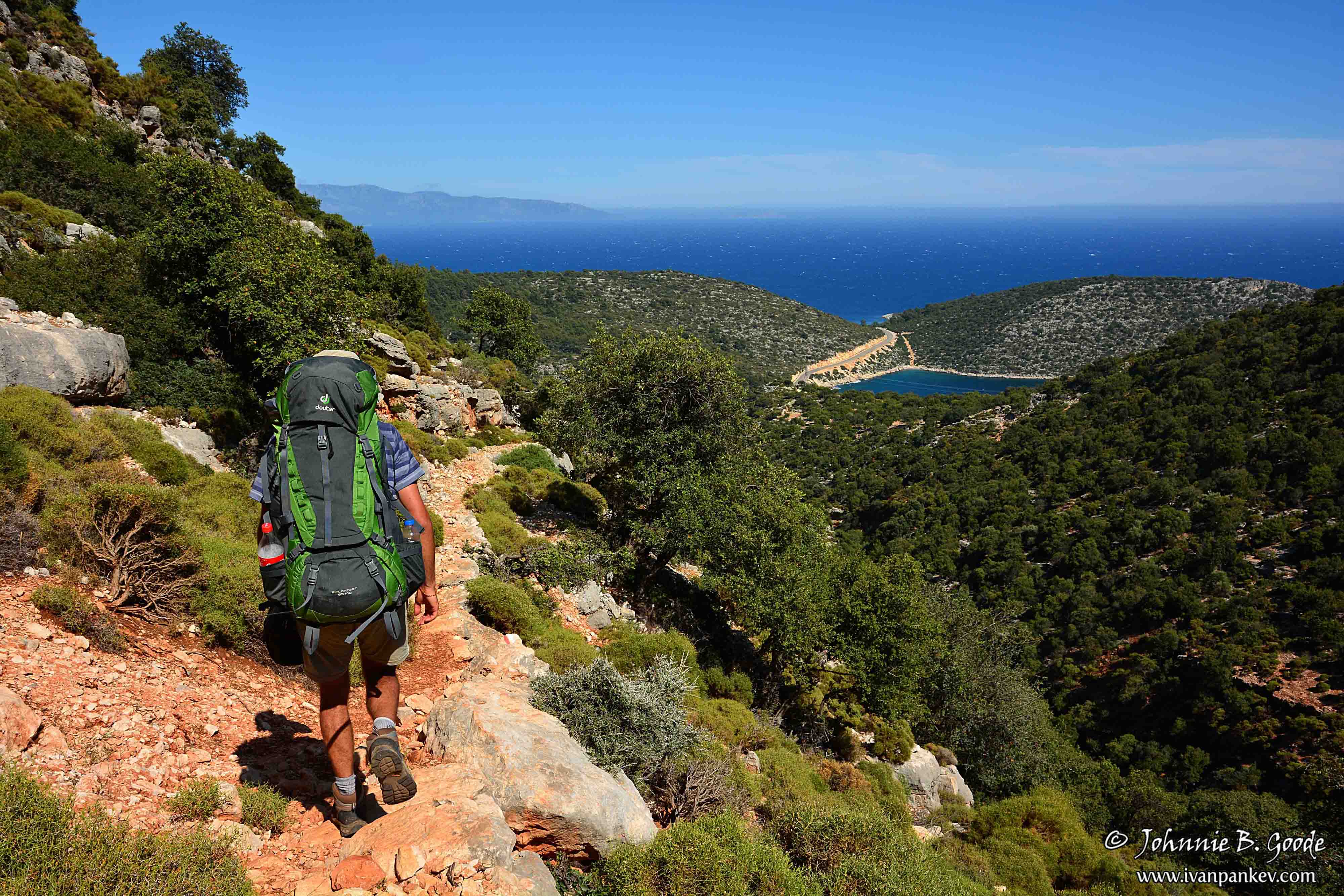 Because of the tough start of this journey, I had tried to reduce the amount of my equipment and managed to squeeze in 25 kg. (without food and water). However, at the end of the long day hikes I was happy to lay down this burden. This was especially true for the two mountain pass crossings with 2000 m. of ascent.

But thanks to this we were “off the grid”. We even had our own source of renewable energy – a solar panel which under the scorching rays of the Mediterranean sun provided us with all the electricity we needed.

So we had the freedom to camp wherever we wanted. Because of the compact dimensions of our home, this was possible even on the smallest sites with panoramic views. 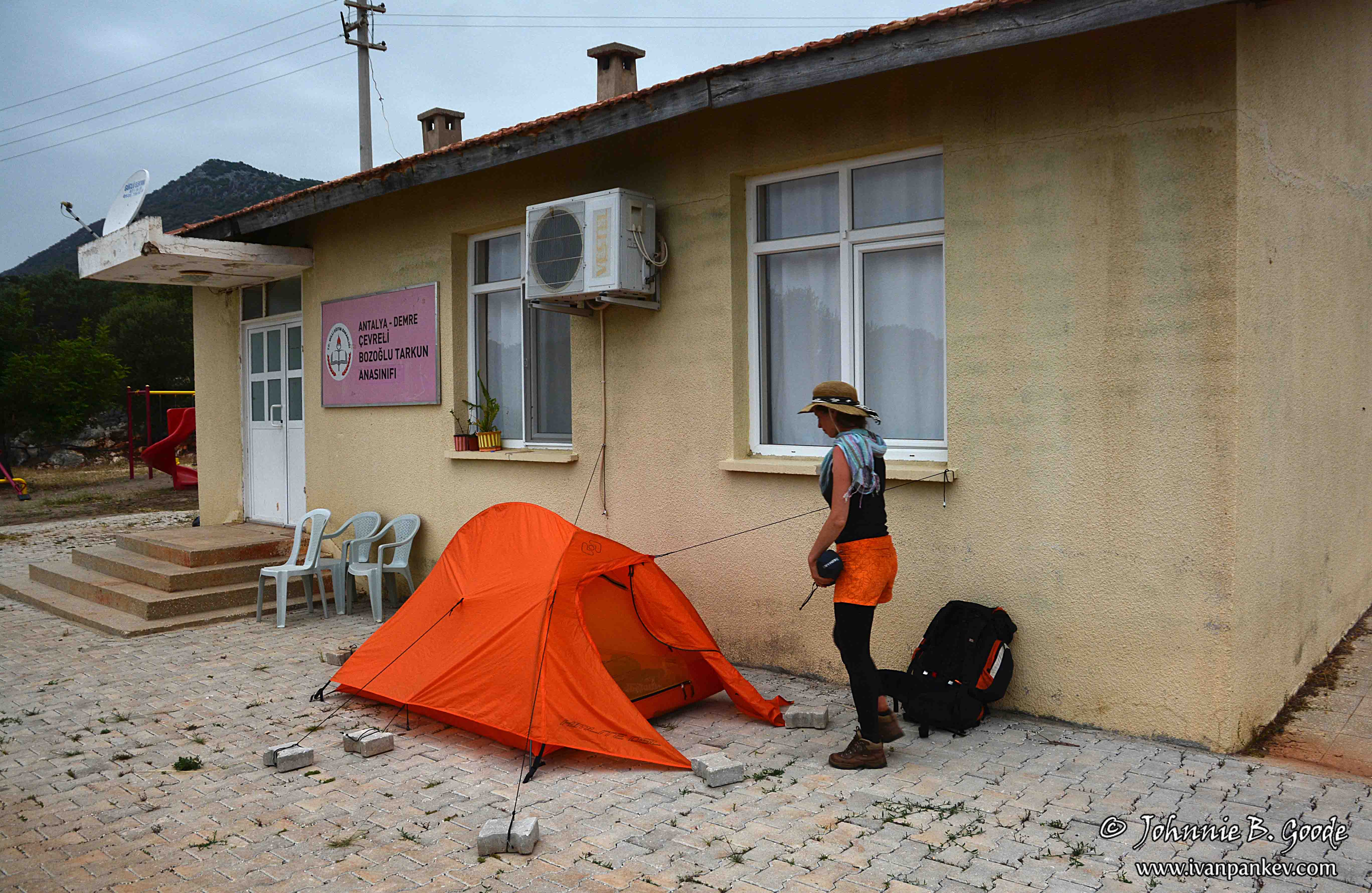 Well, sometimes our options were limited. As the great Freddie Mercury sang: “It’s been no bed of roses, no pleasure cruise.” 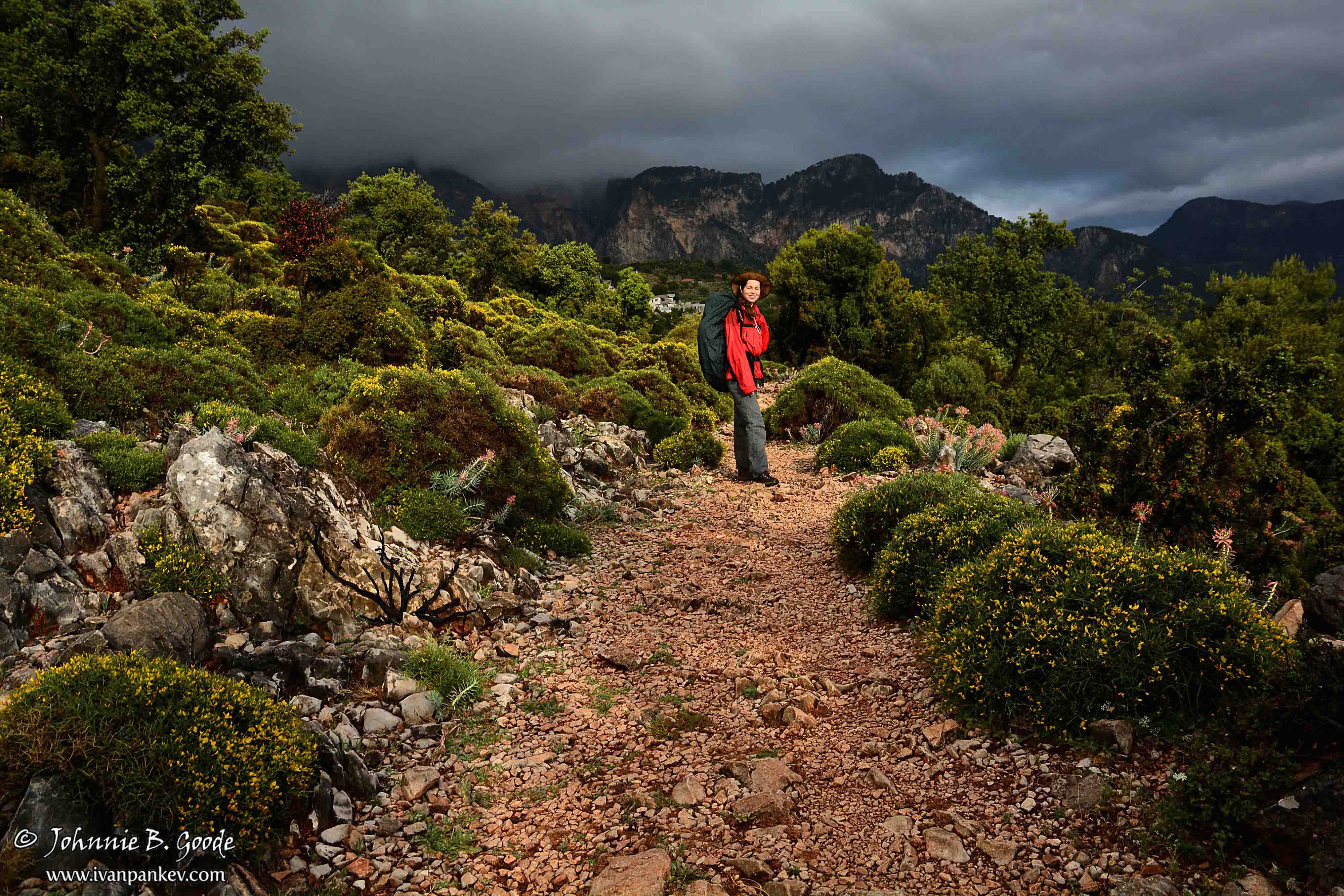 Due to the hot Mediterranean climate, April and May are supposed to be the best months for the Lycian Way because it is not too hot (like in summer) and it does not rain (like in winter). Well, at least a half of our days were rainy. 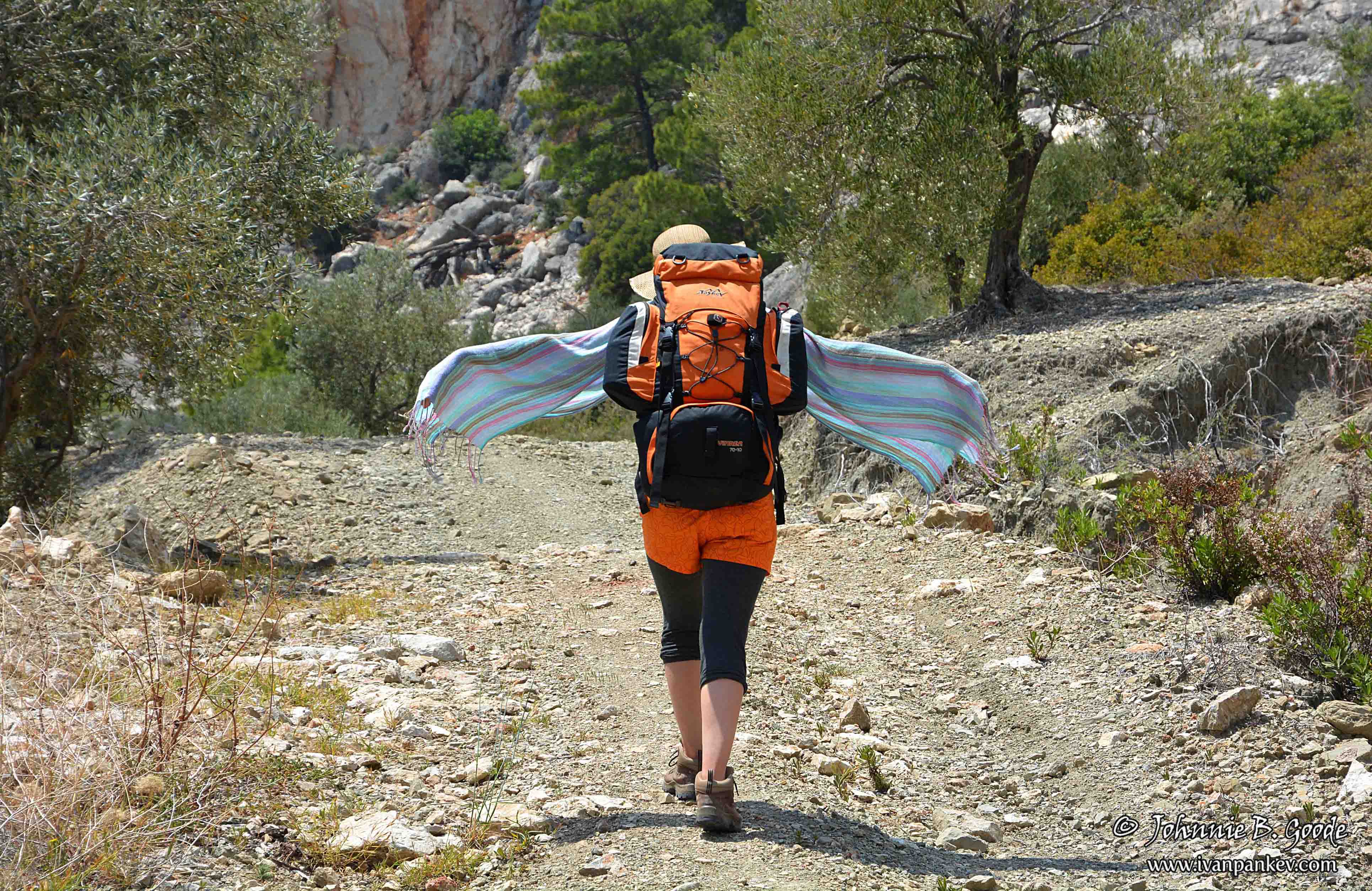 During the rest of the Lycian Way we were sincerely sorry for the lack of clouds to save us from the burning rays of the tropical sun. So I learned to love the mosques – because of the ritual washing they always had a drinkable water source even in the remotest villages. Yet we acquired the habit of drinking until our bellies ached. And Tatyana invented the perfect sunscreen – shawl. 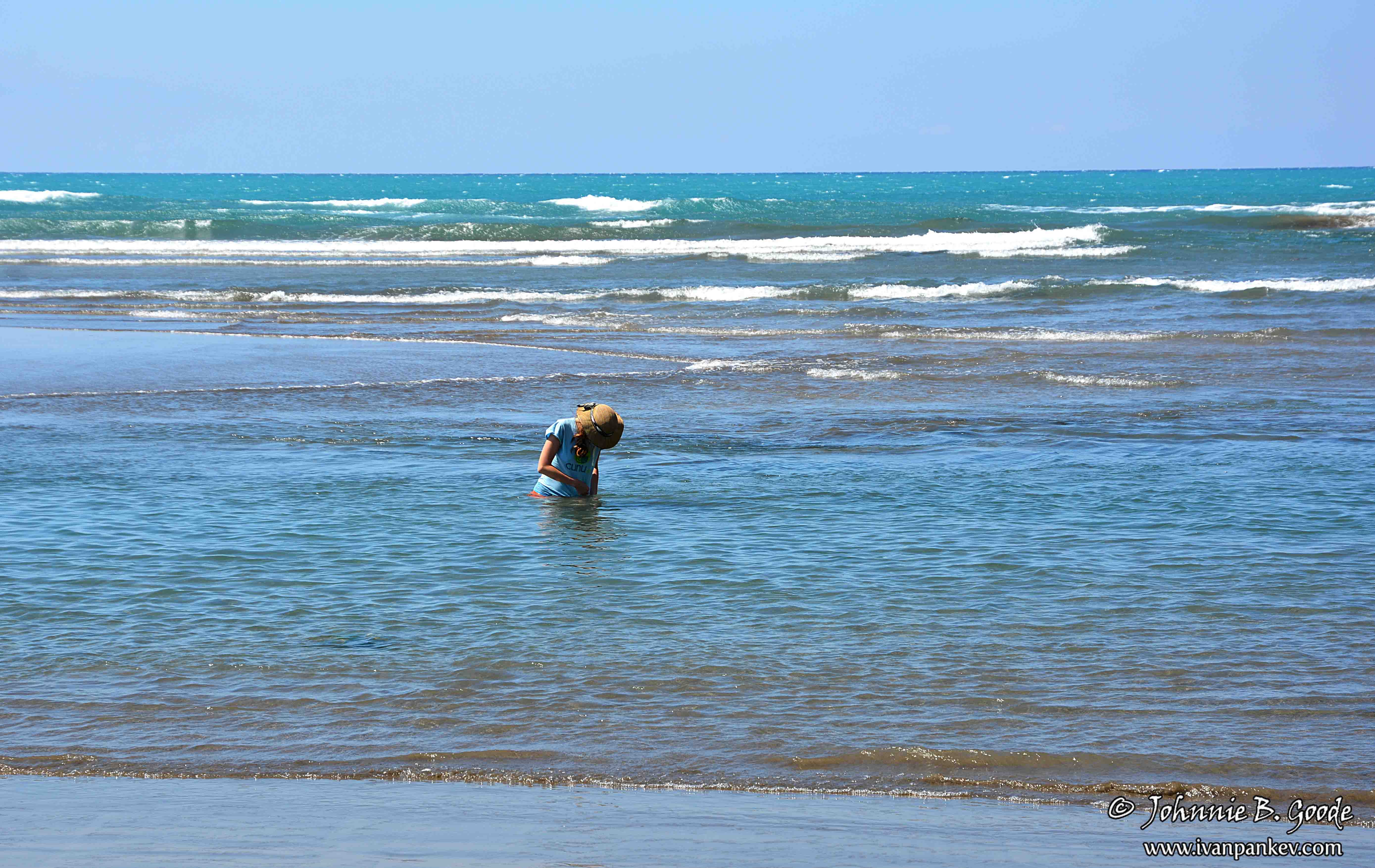 The days went by, the kilometers passed and we accumulated fatigue and dirt. So we used every opportunity to wash our clothes and “take a shower”, often simultaneously. As a popular Bulgarian saying goes:

“Bears wash themselves and clean in silver streams.

Is there a reason for you not to act like a bear do? “ 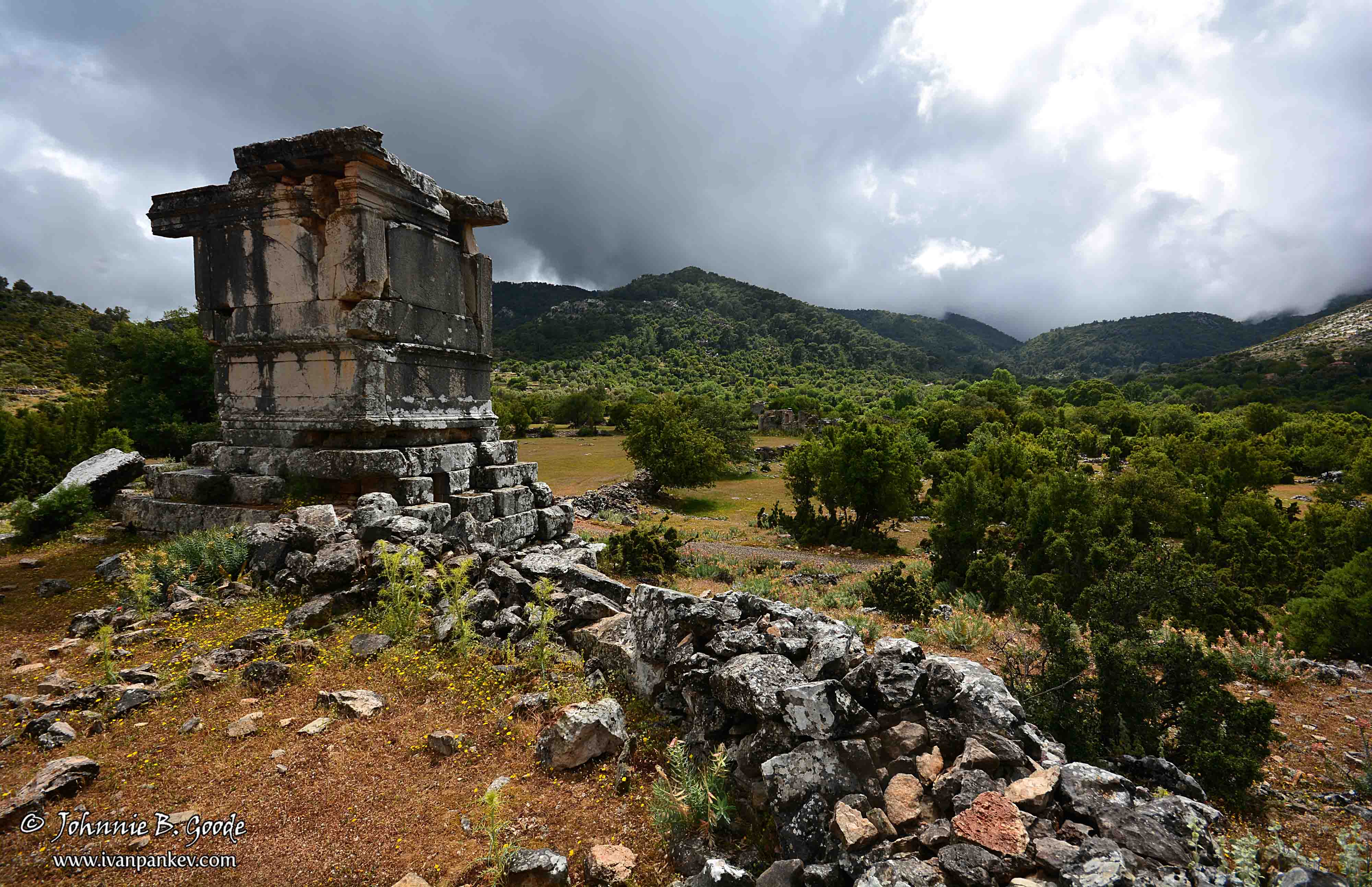 The Lycian Way goes by this name because it connects multiple city-states of Ancient Lycia. Walking it, we went through a bunch of these ancient cities: Sidyma, Pydnai, Letoon, Xanthos, Patara, Phellos, Antiphellos, Apollonia, Aperlae, Talmussa, Simena, Myra, Andriake, Belen, Olympos, Chimaera, Phaselis, Attaleia. Falling into details about each of them would bore even the history nerds. The most interesting to me were the unattended sites where I could roam around and “make new discoveries” among the undergrowth. 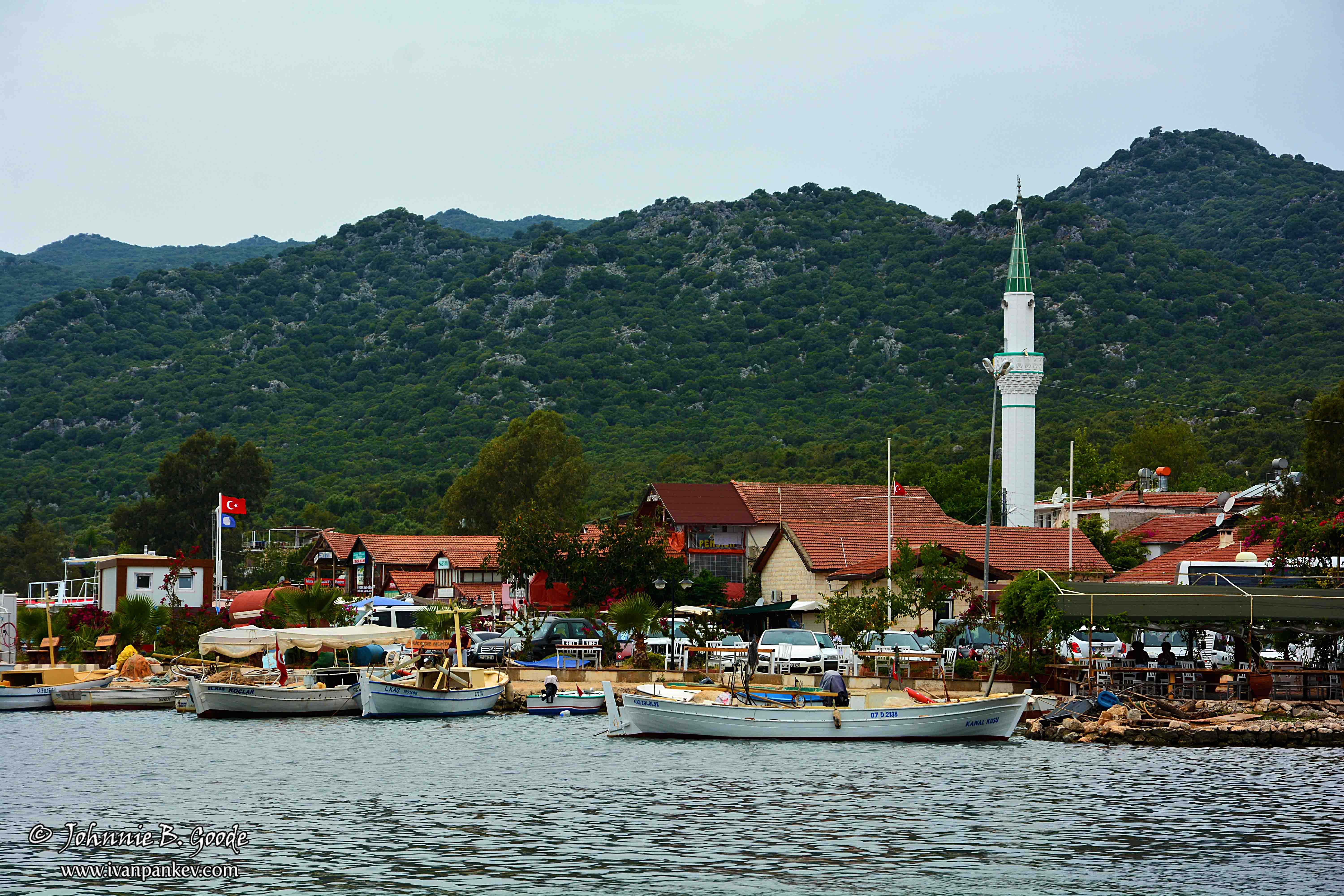 Because of the several terrorist attacks in Ankara and Istanbul, the war in neighboring Syria and the complicated political situation after the downing of the Russian fighter jet the absence of tourists on the Turkish Mediterranean coast was total – the hotels and restaurants were almost deserted. And though I liked it that way, I sympathized with the owners who were waiting for clients that were just not coming. And there were some really pleasant towns – we liked most of all Kaş and Çıralı (Olympos).

I cannot deny that in the course of the Lycian Way we had doubts about its meaningfulness and even discussed giving it up. The turning point proved to be the reaching of the Gelidonia lighthouse. After that it was a kind of obvious that we had to get to the end. 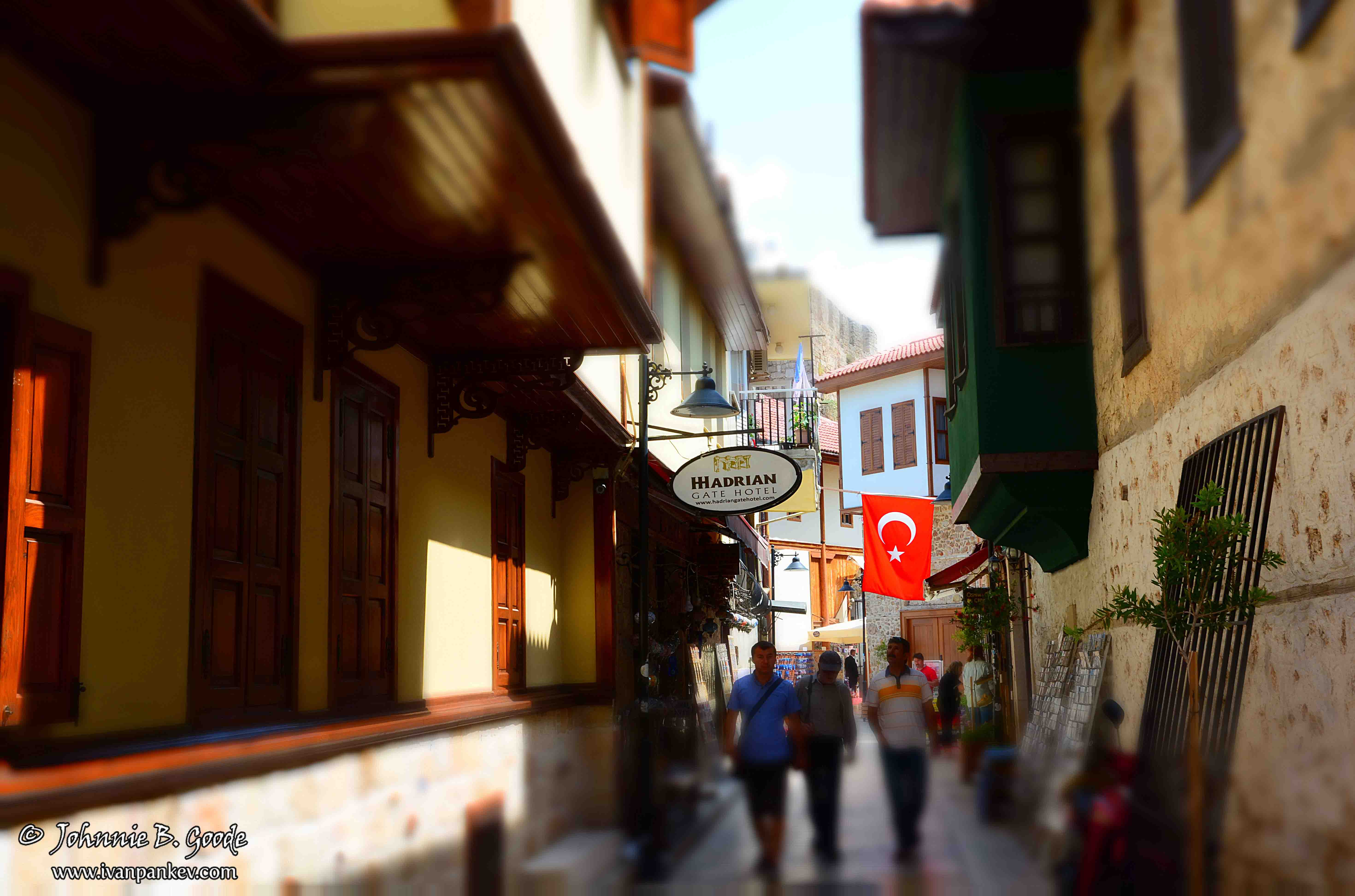 In Antalya the summary of the Lycian Way was as follows:

Thus we concluded a new challenge – our first long-distance trek. 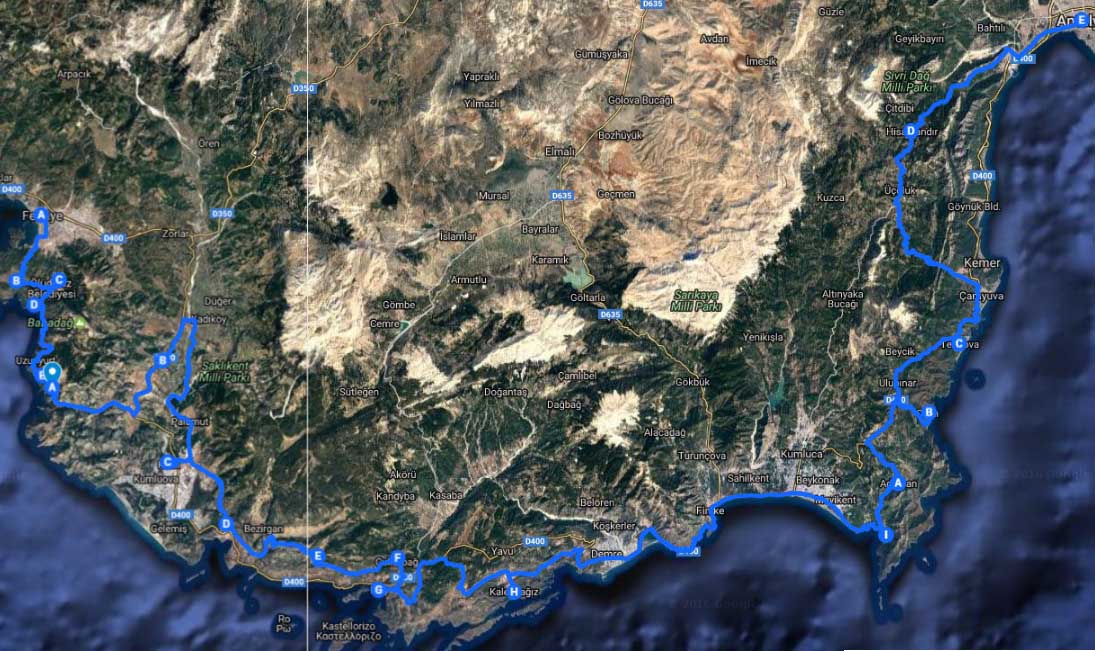 Here our paths temporarily parted – Tatyana took a flight to Istanbul. It was time for me to continue the journey alone. Where to – the road would show.