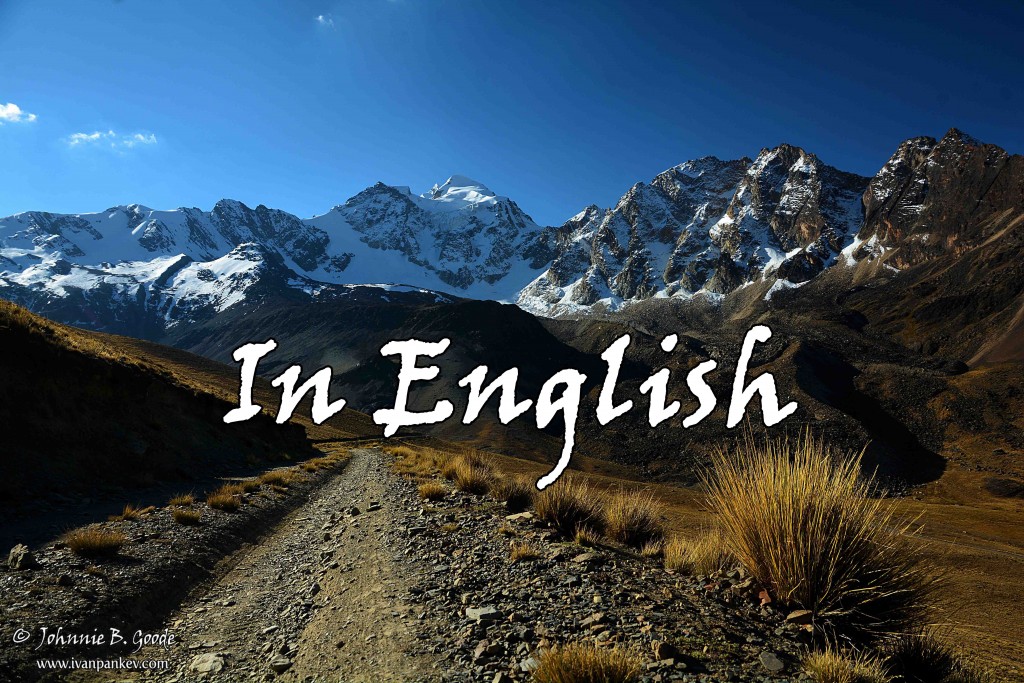 After the first 20 days and over 3000 km. of hitchhiking throughout Uruguay and northern Argentina, often sleeping in my tent next to roadside gas stations, my journey continued in Bolivia. Here, because of the low transportation costs and the lack of personal cars, I gave up this way of travelling. I took my first coach with great pleasure. I could just relax and fall asleep, stare through the window or read a book – unattainable “luxury” so far. Furthermore, I limited the camping only to the mountains, but spent more time finding the cheapest place where I often was the only foreigner. 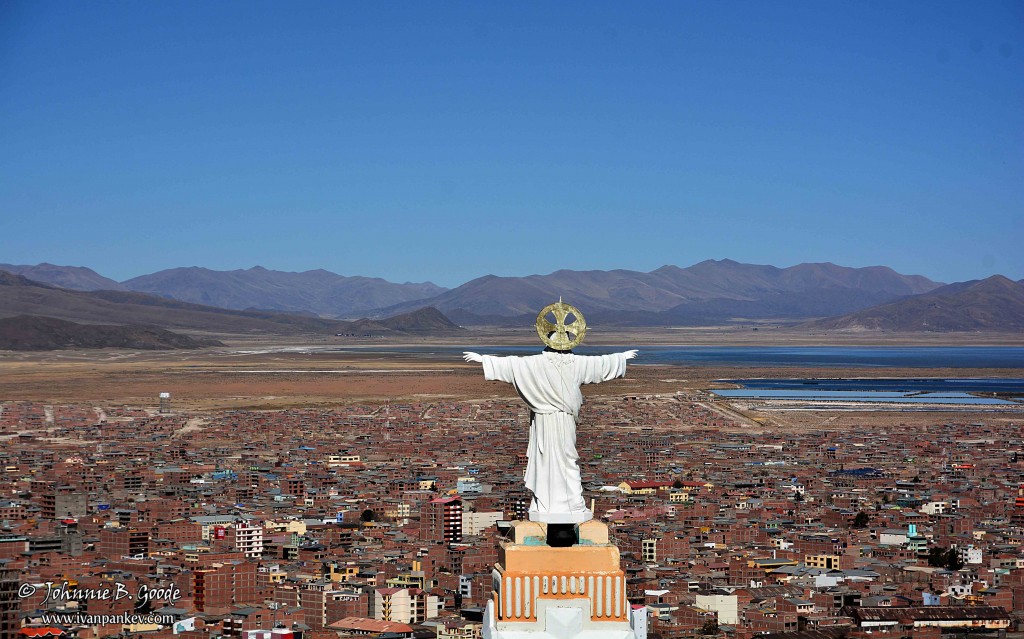 My first stop was Oruro – ugly, looking like a huge construction site city with nice historic center and with the popular in South America Cristo Blanco (White Christ), a smaller sibling of the statue in Rio de Janeiro. During my previous visit to the country I had seen the interesting for me places so this “Ciudad de Dios” (City of God) was the only new city that I visited in Bolivia. I had come for trekking and devoted myself to it. 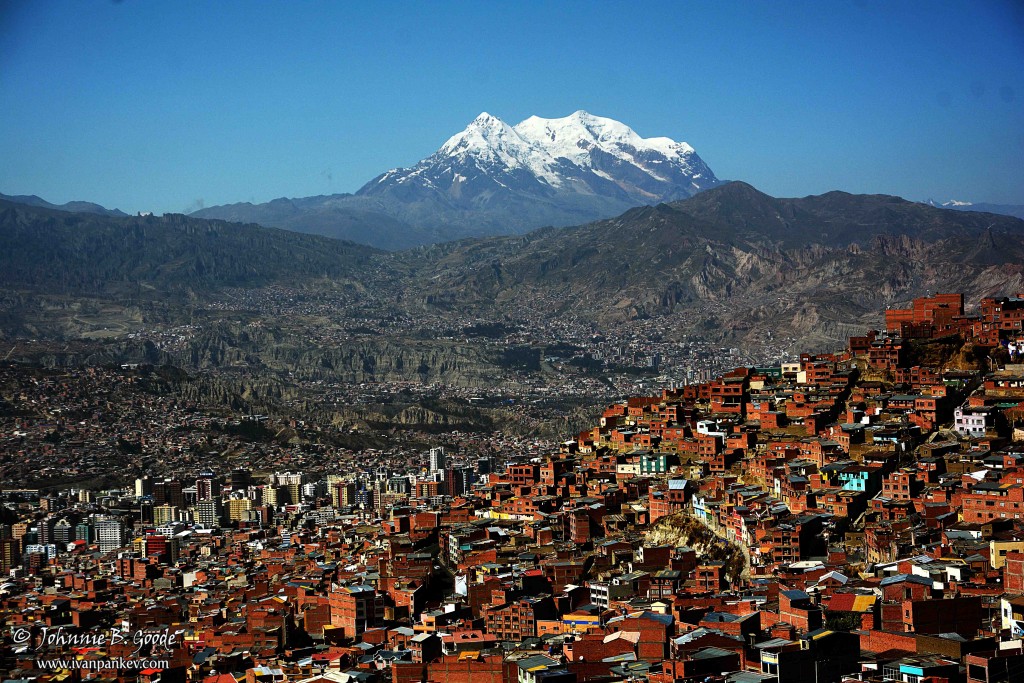 Crowded, noisy, dirty, with terrible traffic, whose exhaust fumes make you fight for every single sip of breath in the already thin air, with feverish, located directly on the sidewalk markets selling everything – from oranges and homemade cheese to dried llama fetuses, with preserved colonial center, with modern glass structures and skyscrapers and with neighborhoods resembling ghettos, with the towering above her Illimani (6402 m.)… In other words: La Paz – the capital of Bolivia and one of my favorite South American capitals. 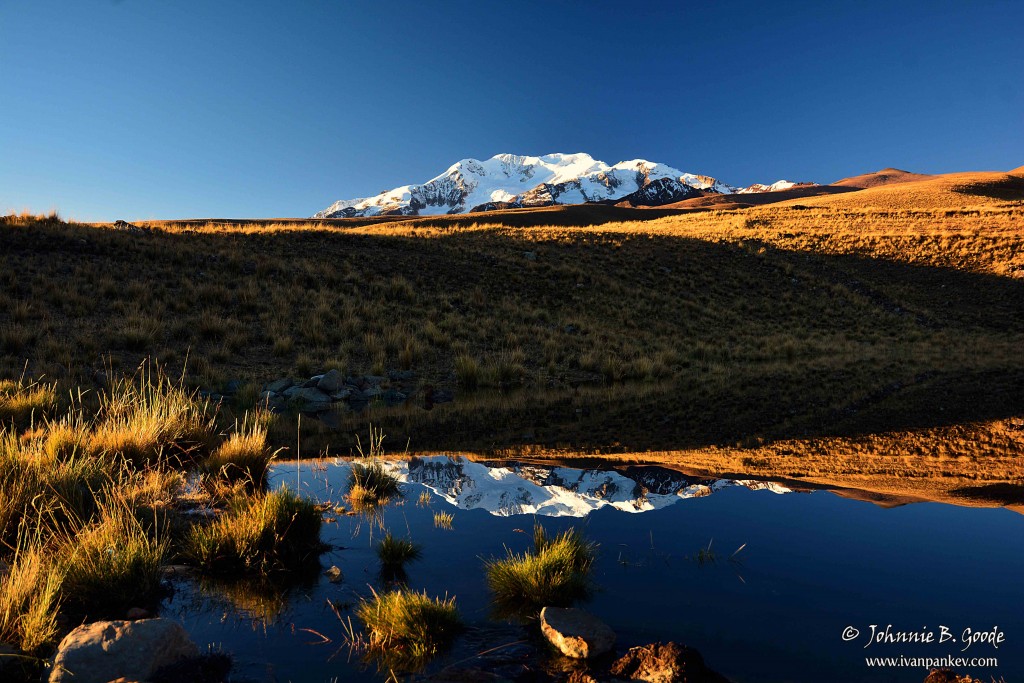 The IIampu circuit was the first of a few treks that I finished. 5 days, 5 ice cold nights above 4100 m., 91 km. The overall accent was 5640 m. and highest point – the pass Abra de la Calzada – 5045 m. (my personal best). The endless day climbs with a heavy backpack full of food and all the necessary camping equipment explain why this is the toughest trek I have ever done. 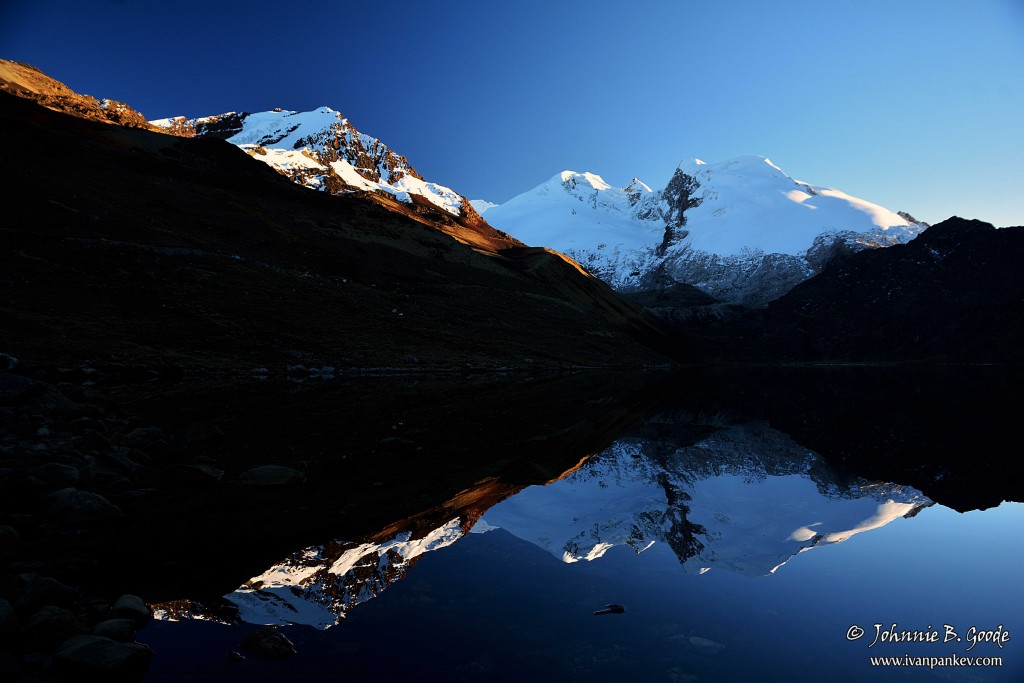 Not only I was alone and didn’t meet any other tourists, but I was really trying to avoid (especially while camping) the handful locals who I spotted, because in my guide were mentioned registered armed robberies in some parts of the route. The views, however, made up for sleeping with a drawn knife to the head, all the burned calories and all the shed beads of sweat. Although I didn’t think like that back then. 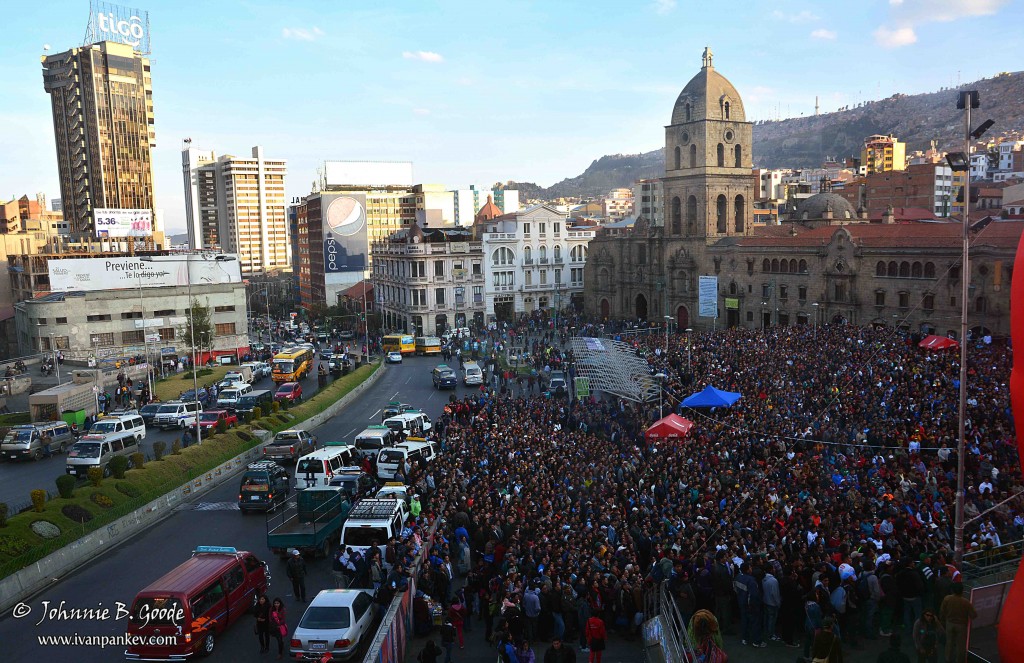 I visited again La Paz just to replenish my supplies and see how are things going with Copa America. It was taking place in neighboring Chile (which subsequently won it). Thousands of people were watching the live streaming of Bolivia’s matches on a large screen on the main square. 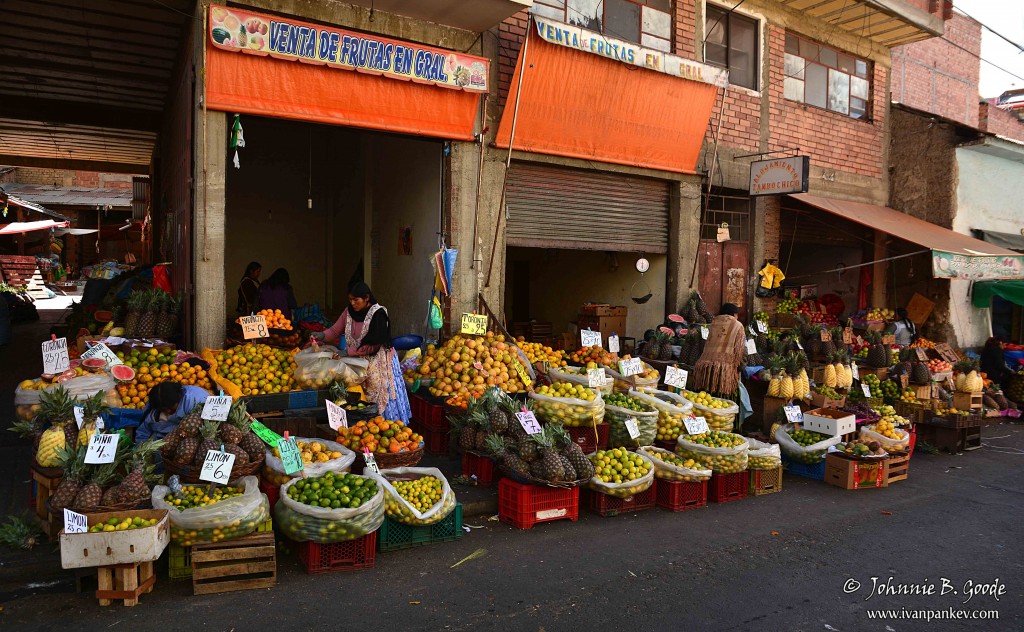 I adore the markets of the Bolivian capital. It’s the only place where you can buy 30 bananas, 20 tangerines, 15 lemons or 2 pineapples for 1 USD. 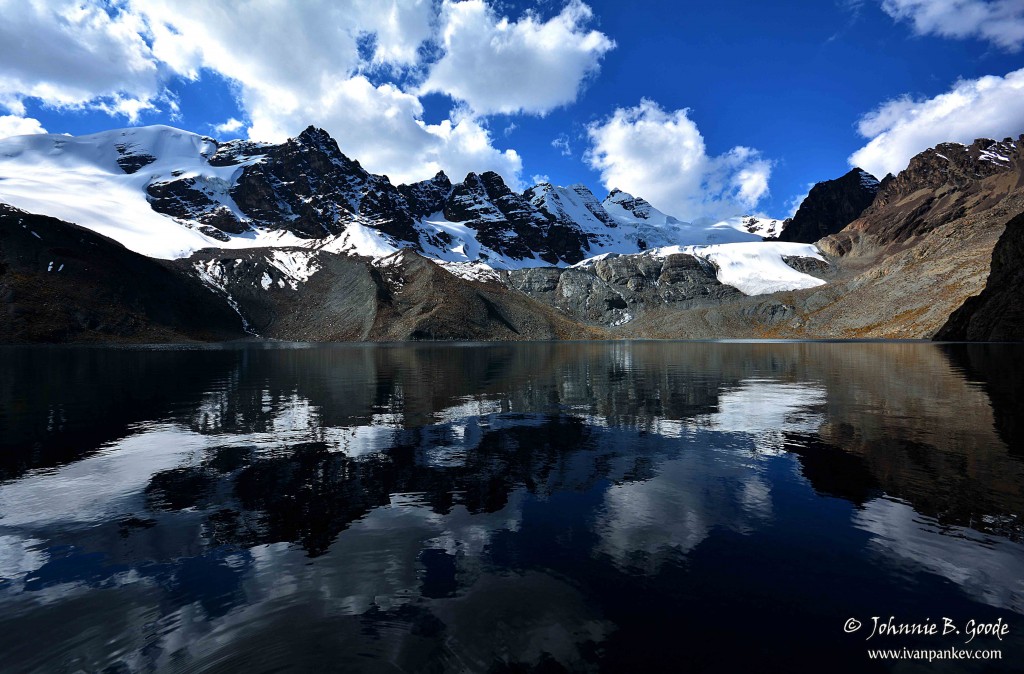 The 5 day trek Condoriri to Huayna Potosi was more physically sparing – “only” 86 km. and 4050 m. of accent. However, the average altitude was higher, with 5 colder nights above 4450 m., during which the water bottle in my tent was freezing. I set a new personal record – nameless pass at 5134 m. 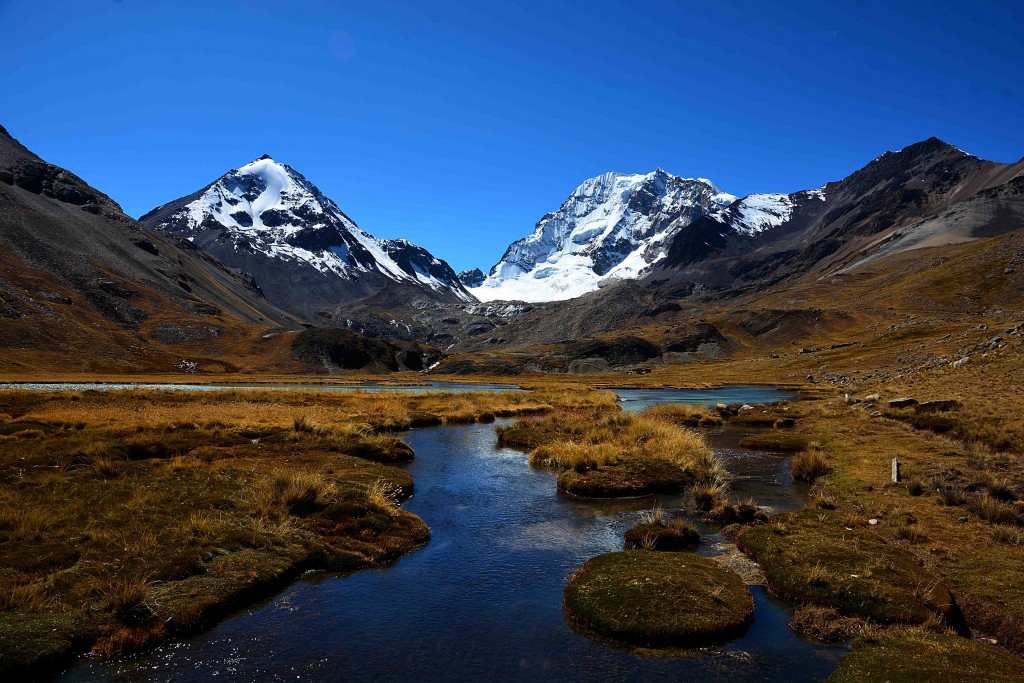 Due to the lack of a map, trail markings, a GPS-track, and often even a trail (or the presence of multiple ones), having only the not so accurate descriptions in a 13-year-old guide, the navigation along the route was difficult. Sometimes I had to rely solely upon my good fortune and my flair, built up during numerous treks. 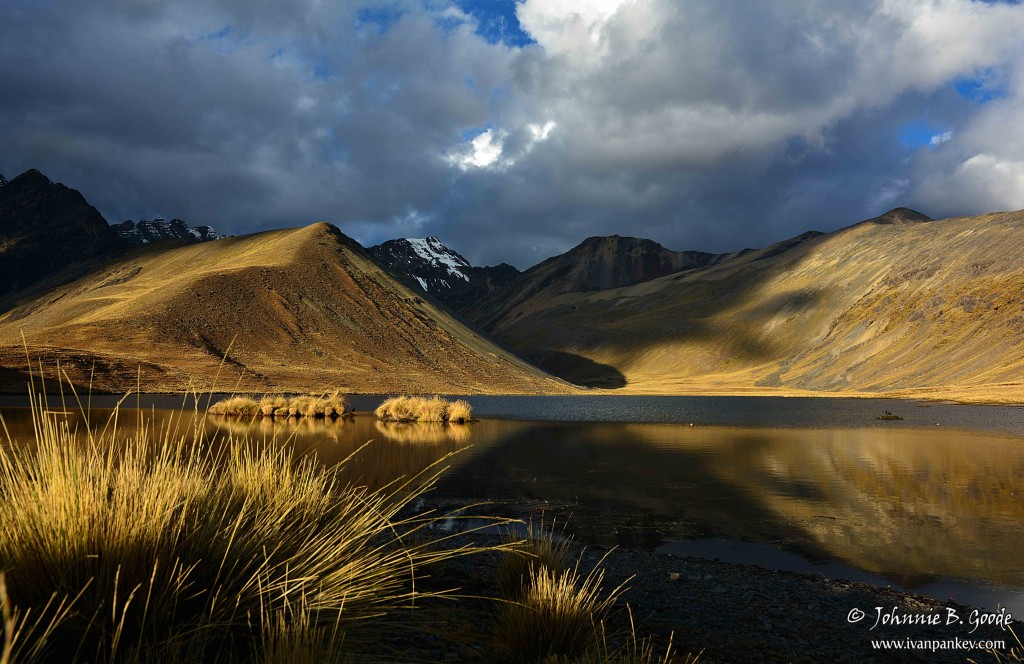 I saw a spectacular sunset and had a calm night in a tent near Laguna Ajwani. A shepherd appeared in the morning and required a fee for “camping” commensurate with accommodation in a good hostel. The situation escalated a lot before we could reach an agreement and shake hands. Figuratively speaking, for we were holding in them stones. 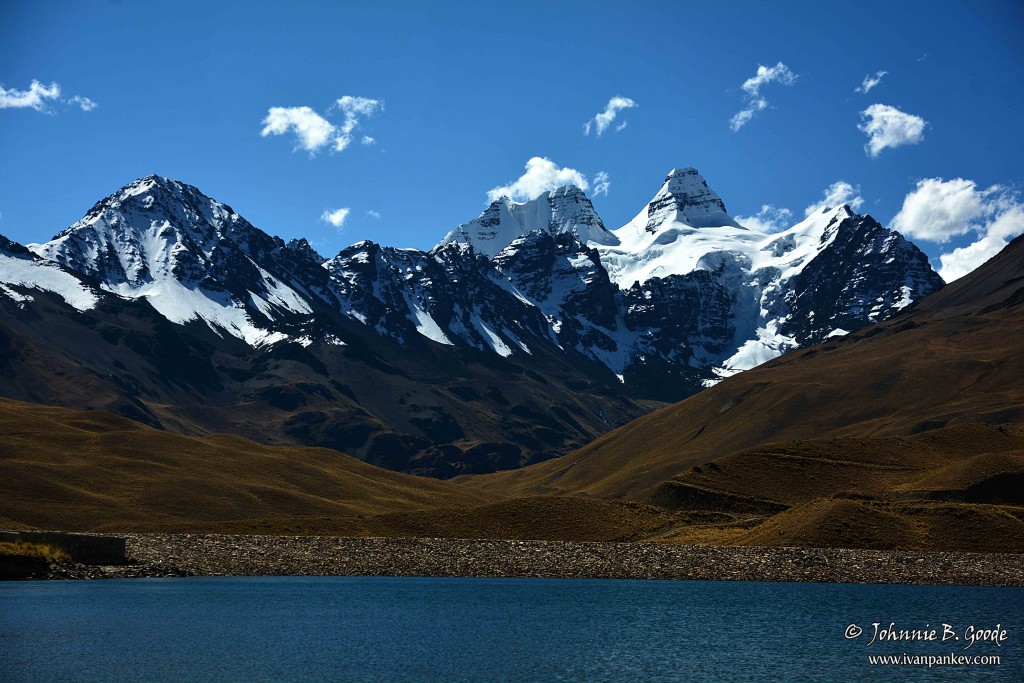 The Condoriri Massif, resembling a perched condor, hence its name, is part of Cordillera Real – an unREALly beautiful mountain. 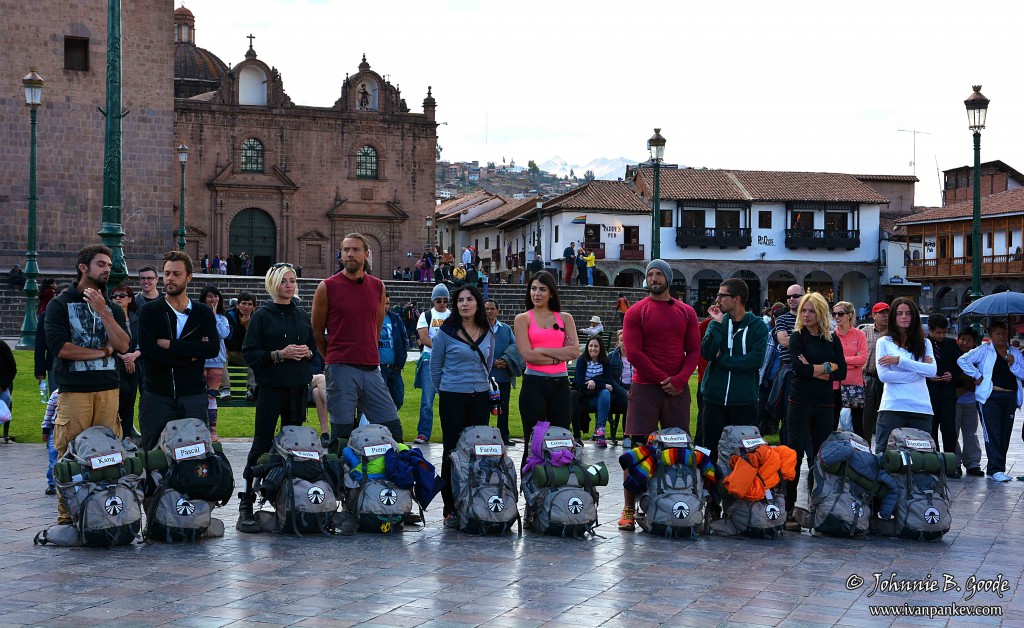 I stayed in the “civilization” only for a short while. I left Bolivia, crossed into Peru and moved on to Cuzco. Here I came across the shooting of an Italian reality similar to “Amazing Race”. Immediately after the shooting of the start of the race with the participants running towards the goal, they all gathered in one place … for a quiet lunch. So much for the reality of reality shows! 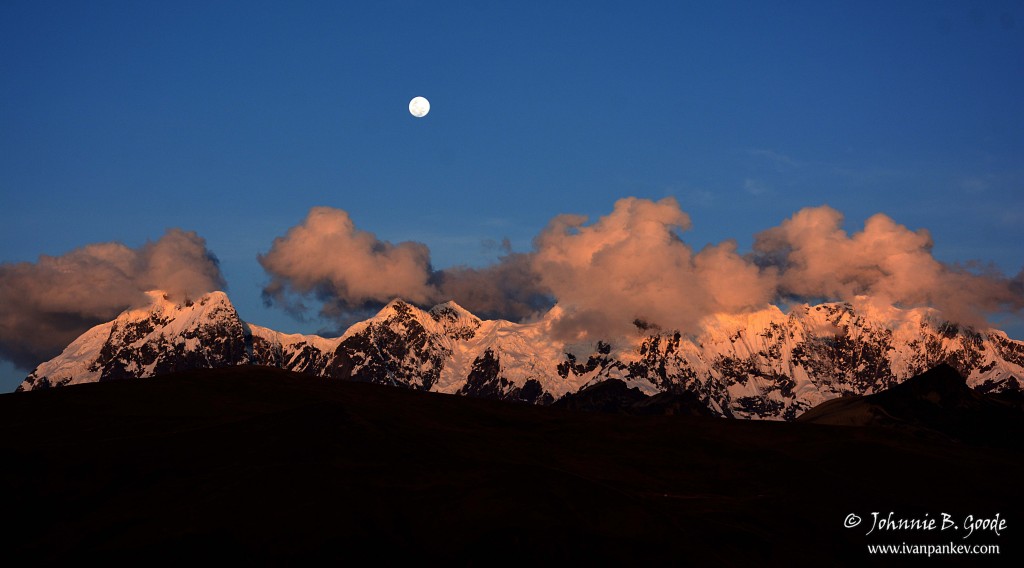 The Ausangate circuit was definitely easier compared to the previous treks. 76 km. and 2950 m. of accent, with a highest point the Palomani pass – 5100 m. and 4 nights above 4300 m. In order to be more interesting for me, instead of the standard 6 I “compressed” it in 4 days. 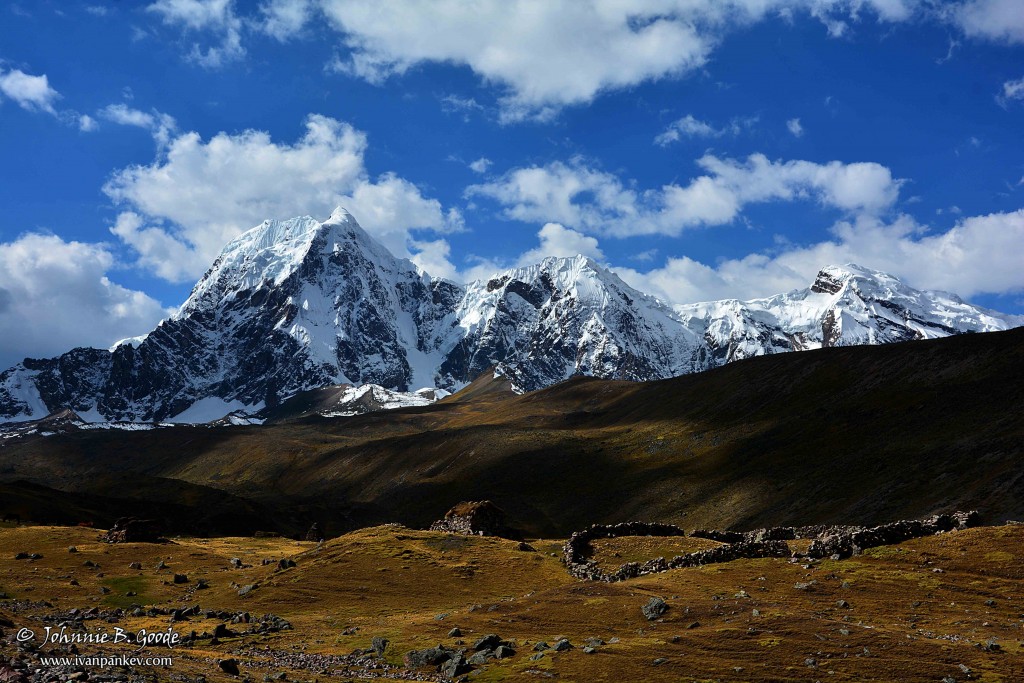 Unlike the Bolivian treks, the navigation here was not a problem. I also met many tourists, but they were accompanied by hired guides and packhorses. Just me and a German had decided to rely on our own capabilities. 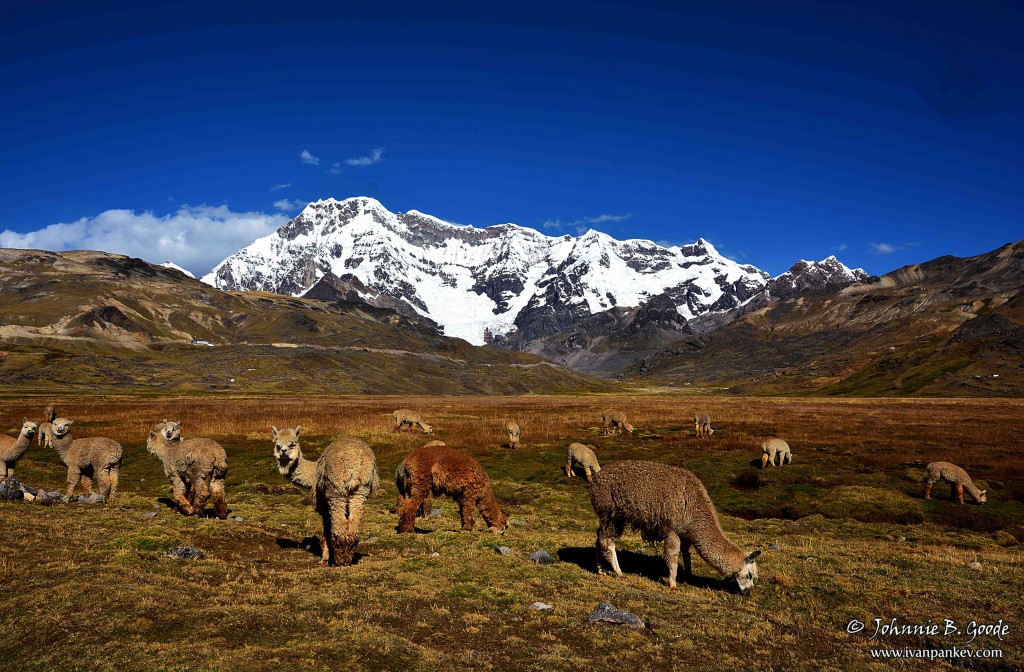 This trek was definitely with the best “price-quality” value, and I also met some friendly locals. 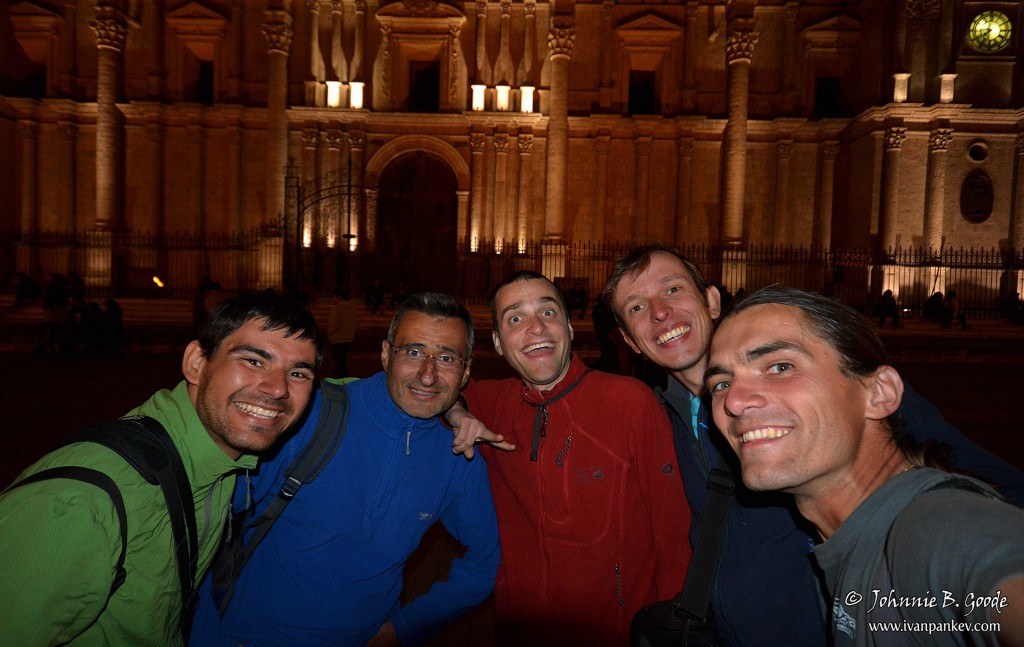 Immediately upon completing the trek I headed to Arequipa to meet a group of Bulgarian friends. They were on a one-month tour around Peru. Despite of the unexpected snowfall and the subsequent 8-hour delay of my bus, I still managed to catch them before their departure for Titicaca. 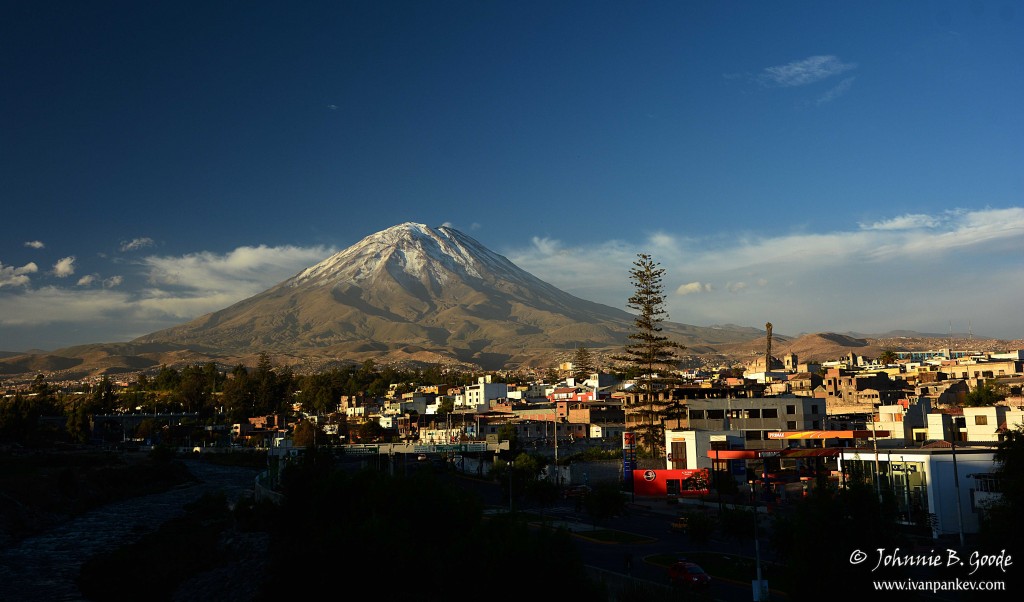 Actually only three of them went to the lake and the fourth. Petar Georgiev convinced me to overcome my fatigue and climb together one of the two volcanoes towering above the city. After some consideration we chose the higher Chachani over the handsome Misti. 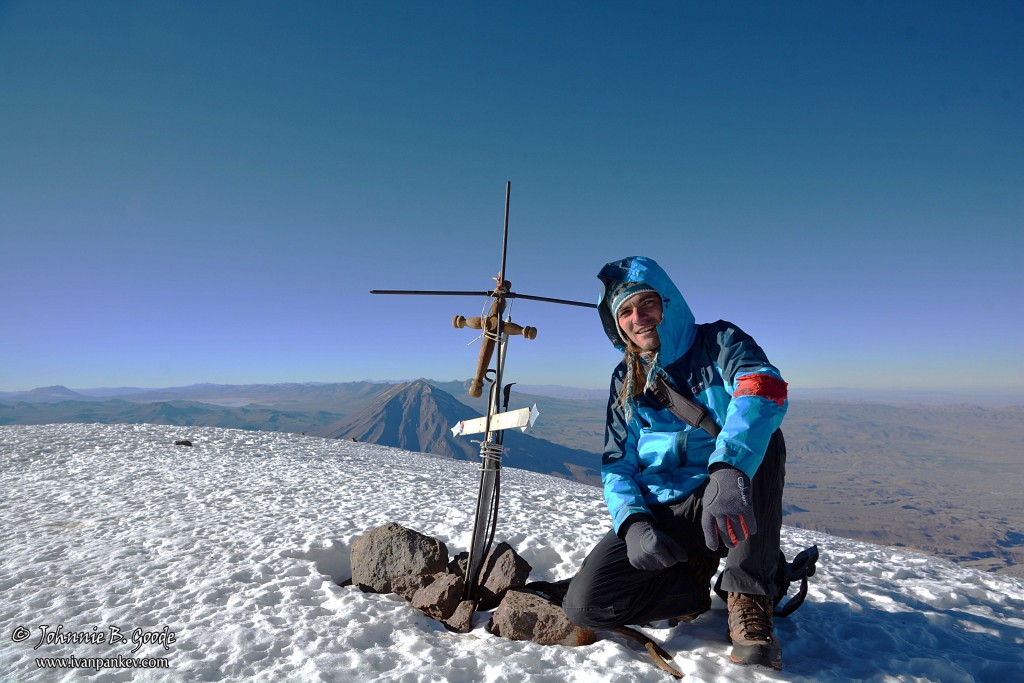 On the 8th of July I joined the “6000+ Club”. At 7:45 am local time we set foot on the top of the inactive volcano Chachani (6057 m.), summiting it without a guide for 4:30 hours from the base camp at 5100 m. It was somehow way too easy. I was well acclimatized and after the completed treks 1000 m. of accent with a half-empty backpack was not a serious challenge. We put the crampons on for the final 100-something meters. The only difficulty was the freezing cold of about -20°C. 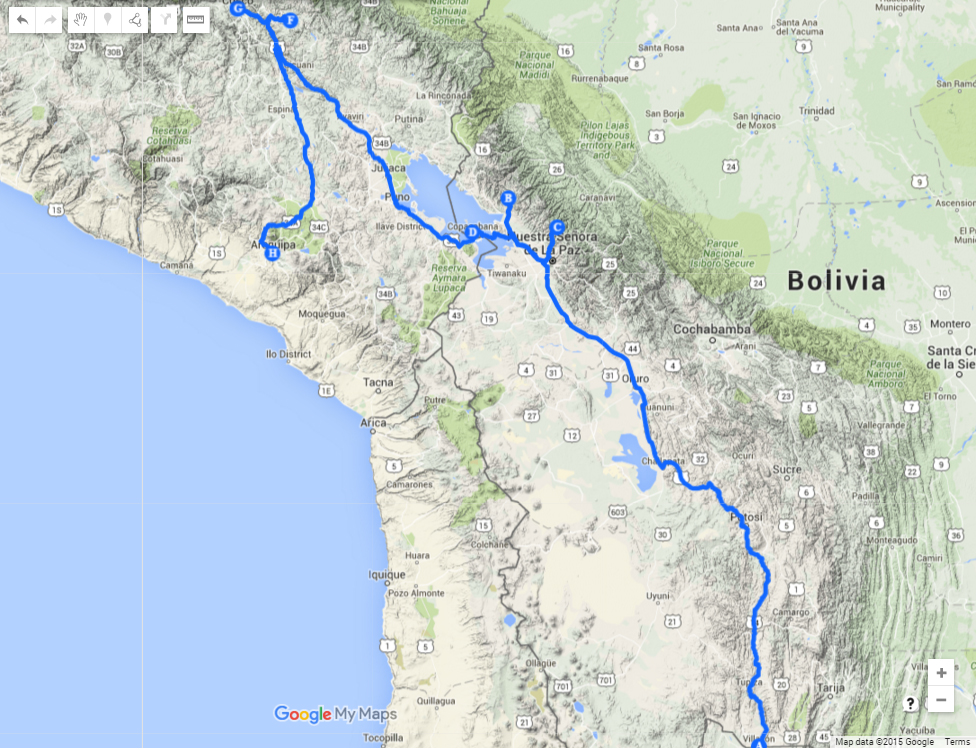